Another Johnny-come-lately joins the subcompact segment
by Botchi Santos | Apr 26, 2011
CAR BRANDS IN THIS ARTICLE 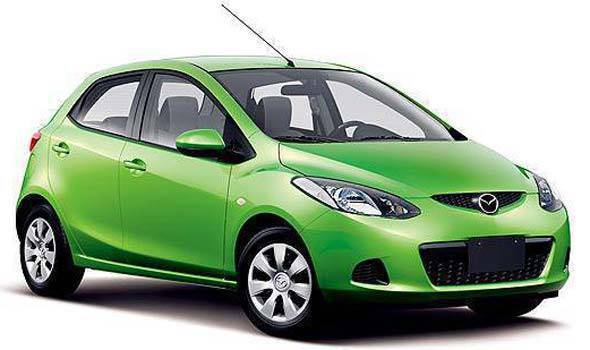 The Mazda 2, a new competitor in the B-segment market, is late in coming to the party. And it sure isn't perfect, which you'd think it would be given the delay its release. You'd think the engineers would've crammed everything--including a kitchen sink--into the minute car.

The Mazda 2 looks small--seemingly much smaller than the Toyota Yaris and the Honda Jazz. But the Mazda--measuring 3,913mm by 1,695mm by 1,485mm--is actually just as big as the Yaris (3,750mm by 1,695mm by 1,520mm) and the van-like Jazz (3,920mm by 1,695mm by 1,525mm). The interior, though, makes one wonder where all those exterior millimeters went. The trunk appears tiny as well, but Mazda's boffins guarantee a golf bag will fit diagonally, something the dinky Yaris can't manage.

The rear seats are quite tight but still decently comfortable for big boys like me and our giant photographer. Last on my nitpick list would be the interior plastics. They feel cheap to the touch, lacking the warmth and texture of Toyota and Honda surfaces.

Yet, despite these valid complaints, the Mazda 2 will be a successful player in the market. If you're so sick of Toyotas and Hondas, the handsome Mazda 2 just might be the car for you.

The Philippines is getting a four-door sedan and a five-door hatchback, both available with five-speed manuals and four-speed automatics, mated to either a 1.3- or 1.5-liter, four-cylinder gasoline engine. But the sedan will come later. It's the hatchback--which we've driven in Thailand--that will arrive first and should be available by the time you read this.

Other countries are getting the variant seen here, with 16-inch alloy wheels and a sports suspension that is almost an inch lower and much firmer than what we're getting. But the standard suspension with 15-inch wheels is perfect for our roads. It is composed at speed with no clearance problems, but feels sharper than a Yaris and equal to--if not better than--a Jazz.

We fly out to Chiang Mai, the summer capital of Thailand, for what will turn out to be a 150km roller-coaster test drive. I've only driven on the wrong side of the road a handful of times inside purpose-built test tracks, and each time has been a disaster for me. Never have I tried driving on public roads. I'm sweating like a pig despite the cool climate. Soon, though, I find that the Mazda 2 is a confidence-inspiring and fun-to-drive car.

On the highway, I hit 140kph to keep up with the high-speed convoy. The Mazda 2's suspension is well-sorted, the car planted solidly with no hint of nervousness. The brakes are excellent, even with just drum brakes at the back. And the steering is meaty at turn-ins, and wriggle-free as you exit a turn, unwind the lock, and pour on the power.

First- to second-gear performance on the four-speed automatic exhibits a lag; I wish there were sooner lockup from the torque converter. But from 60kph to about 140kph, the pick-up is quite impressive as the Mazda 2 makes full use of its 102 horses, hauling a car that weighs 1,054kg. Being lighter than the Jazz and the Yaris by some 25 to 60 kilos is crucial, especially for a small car with modest power. Using varying grades of steel--along with boxing and crimping the metals in key areas to slash down the car's weight--is in line with Mazda's goal of cutting down overall fleet emissions and fuel consumption by 30 percent over the next few years.

After the superhighway come twisty mountain passes where the suspension is put to the test. I flog it just to keep up with the crazy convoy of cars ahead, helmed by drivers seemingly impervious to fear as they counter-flow through blind, high-speed sweepers and tight hairpins. But the Mazda holds its own, thanks to the eager but composed handling.

A test drive of the variant equipped with the sports suspension and 16-inch wheels shows that it is harsher and more fidgety even on the smooth roads outside Chiang Mai. Clearly, Mazda Philippines has erred correctly on the side of caution by specifying the standard, more compliant (but still sharp and sporty) suspension for our market. The good driving position means I sit low with my shoulders almost level with the steering wheel, race-car-style. Yet this position is still supportive and comfortable, with the seats having excellent support despite my heft.

With a drag coefficient of 0.33 for the hatch and 0.30 for the sedan, aerodynamics is par for the course. Tire, wind and road noises are significantly minimal, though Mazda has intentionally unmuffled the exhaust note for sportiness. Personally, I think it's a consequence of the removal of an exhaust silencer to save on weight and cost.

Overall, the Thailand-made Mazda 2--aimed at a young, first-time market with females in mind--should and will fare well. It impresses on the dynamic as well as the aesthetic front, and also features functional bits like fold-down rear seats for increased interior flexibility. It is also competitively priced at P795,000 for the top-of-the-line 1.5 R hatchback variant. The others had better watch out.

Photos by Alfred Mendoza and from the manufacturer
From Top Gear Philippines, January/February 2010