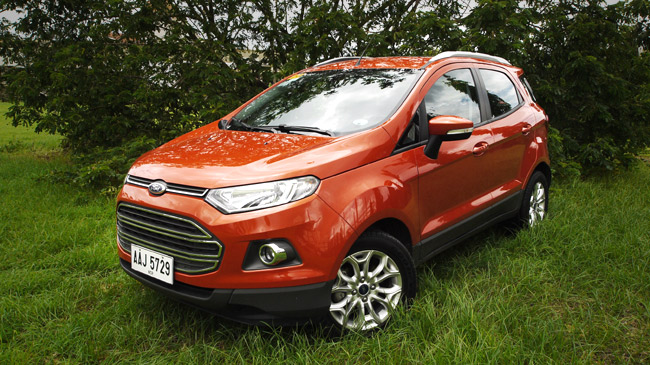 Once upon a time, crossovers were small lifestyle vehicles rather than family-size utility trucks. Hence, the term "cute ute." This is also why, incidentally, a first-generation Toyota RAV4 could be had in colors like teal and pink.

But with the class now comfortably grown full-size, there's room to reintroduce crossover buyers to the joys of minimal motoring. With the Fiesta-based Ford EcoSport, the American carmaker looks to get its foot in the door first. Taller, wider and bigger than the Fiesta, but much smaller than the current crossover formula, it certainly fits the bill. Just don't call it "cute." 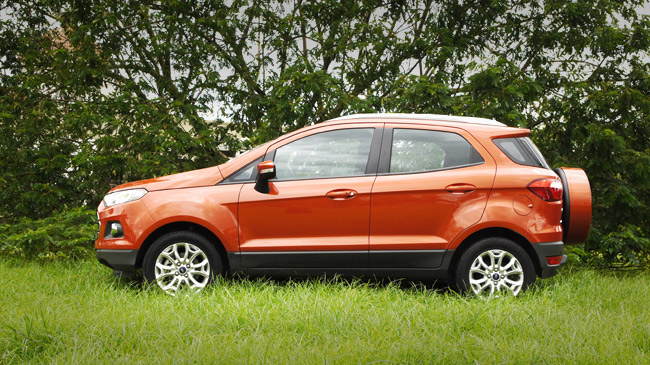 Razor-sharp lines move purposefully around this egg-shaped little car in what feels like a bizarre crossover between Angry Birds and Iron Man. The aggressive multi-blade razor grille would look downright scary if the car wasn't so petite.

To compensate for the tall, blunt shape, Ford has done a lot of tweaking in the aero department. High sills on the hood control airflow around the windshield, and rear wheel spats and window "kickers" minimize turbulence around that big external spare tire carrier. Sadly, it's a 15-inch steel wheel under that cover rather than a 16-inch alloy like the other four. Wraparound rear lights cleverly conceal the ultra-wide hatch opening. 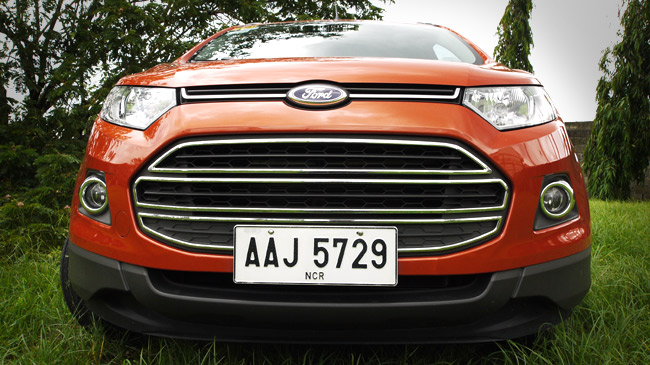 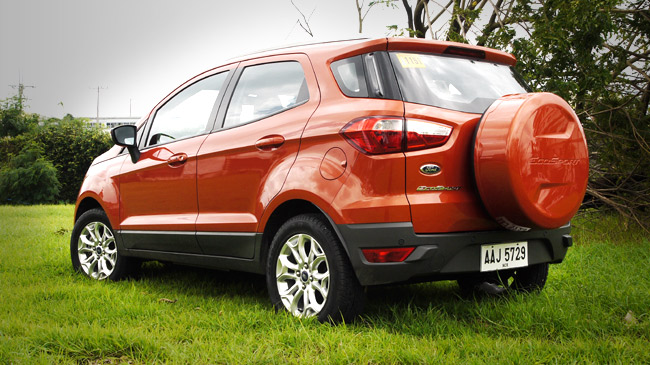 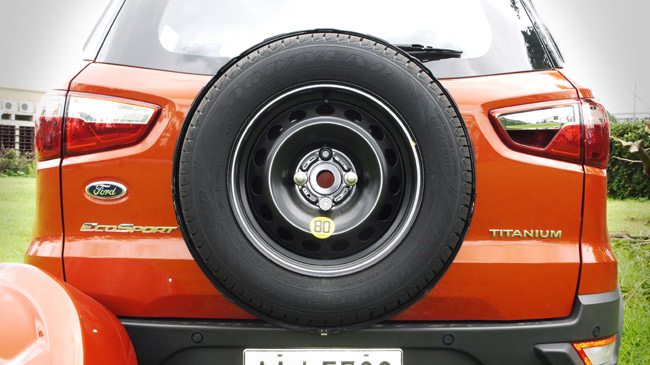 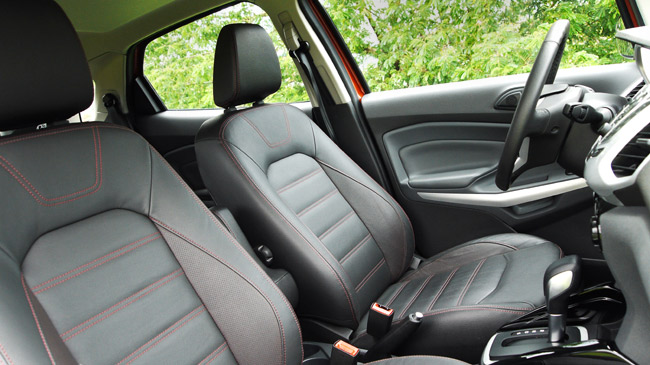 While the interior looks very Fiesta-ish, the tall greenhouse and the expansive cabin make it much better for spreading out, especially for taller drivers. But while the scalloped doors help create extra elbow room, there's little console space and storage between the front seats. The petite center armrest is nice though.

The rear seat is still narrow for three, but gets much more legroom and headroom, with a nap-worthy recline built into the backrest. A scalloped-out recess on the side-hinged hatch helps the EcoSport boast great cargo capacity on paper, but the narrow load floor means you won't be able to use that extra space unless you flip up the 60:40 fold-and-tumble rear seats and load cargo from the side. 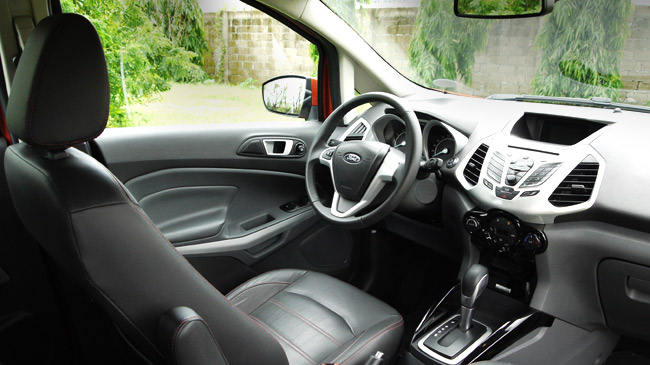 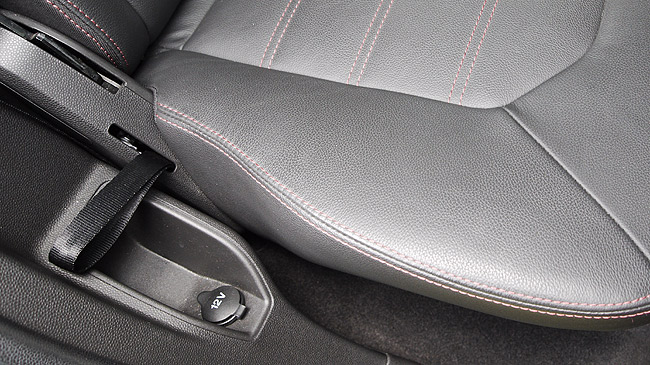 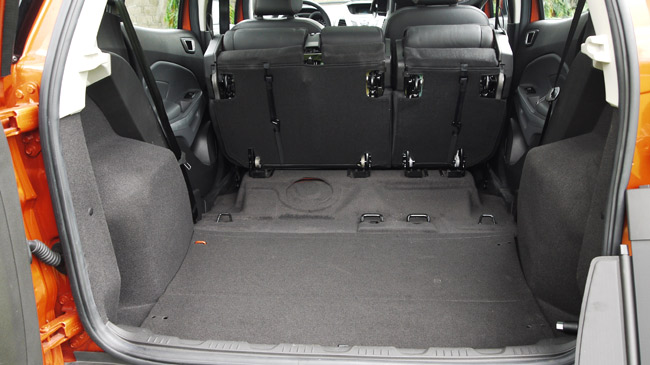 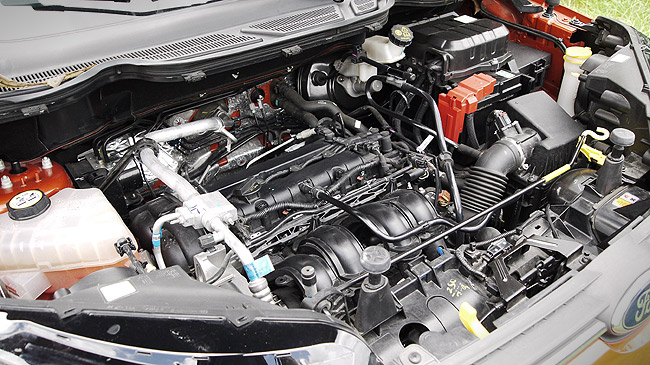 The powertrain, lifted directly from the Fiesta, performs as you'd expect. The dual-clutch 1.5-liter motor sounds rather agricultural when lugging at low speeds, and there's still some hesitation and surge in heavy stop-and-go traffic. While punchy torque and six gears get you around nicely, a little more power and a more responsive manual mode would be nice. 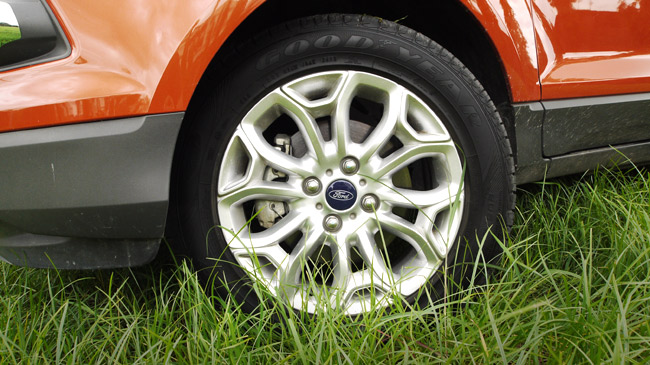 Now for the good news: The EcoSport is a joy to drive. Sharp steering and a buttoned-down chassis make it corner flatter and harder than you expect, sitting so high off the ground. While stiff tire sidewalls can get choppy over sharp bumps, the ride itself is surprisingly secure and absorbent.

On the highway, the EcoSport is nice and quiet at speed. Thank you, aerodynamics! Narrow side mirrors mean you have to take care when merging, though. Around town, high seating and big glass make the EcoSport easy to drive and park, the short body and integrated parking sensors allowing you to fit into slots you would not look twice at in a regular crossover. 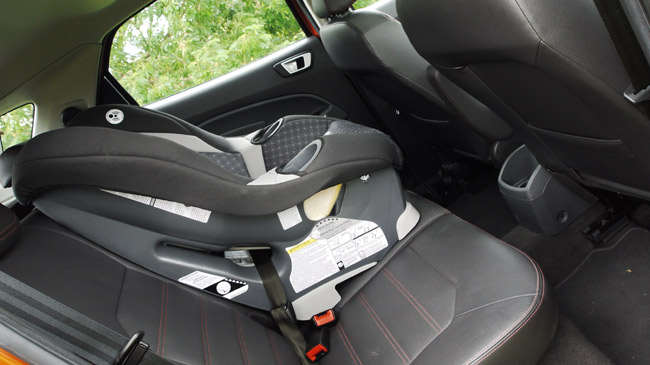 Ford is quick to hype the EcoSport's 550mm wading depth. With a headlight-level air intake protected by a rubber flapper valve and the ECU mounted at the top of the engine bay, I believe it could do even better.

Sadly, while the 200mm ground clearance is only trumped by the Subaru crossovers and the CX-5, the 205/60 R16 Goodyear Assurance Fuel Max tires and the standard traction/stability control don't give you much bite when crawling across muddy slopes. Not that other 2WD crossovers are any good off the pavement either.

On the plus side, with hill-launch assist, SYNC, voice control, Bluetooth connectivity, leather, rear 12V power points and a small sunroof, the EcoSport is rather well-loaded for its size. There are also Isofix latches for all three rear-seat positions. Most cars only have two.

So you're not fitting three child seats back there, but the extra flexibility is great. Flexibility is a key word for the EcoSport. It gives you more space and more usability than a hatchback, while being easier to drive and live with than a full-size crossover. Seems like the market agrees. In my time with the car, I saw these things everywhere.

The sticking point for the Titanium variant is the price. Other trim levels go for about P80,000 more than comparable Fiesta variants, but this one costs nearly a million bucks.

Smart money is on the mid-range Trend, which gives you most of the toys, along with a lovely and responsive manual transmission, for much less money.

Review: Subaru WRX 2.0 MT
View other articles about:
Read the Story →
This article originally appeared on Topgear.com. Minor edits have been made by the TopGear.com.ph editors.
Share:
Retake this Poll
Quiz Results
Share:
Take this Quiz Again
TGP Rating:
/20