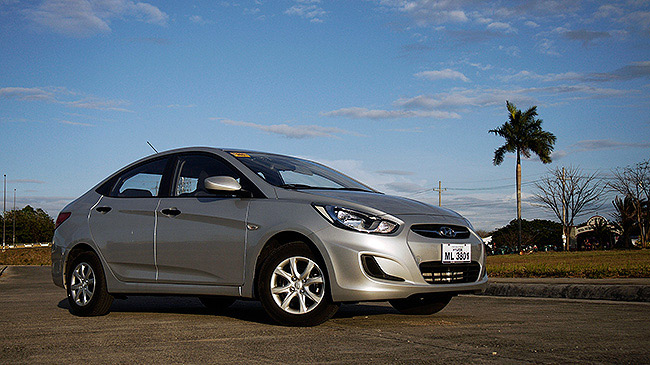 A few weeks ago, we wrote about a fairly expensive little Hyundai called the Grand i10. While the base variant is very price-competitive, the top-of-the-line version costs quite a bit of money. Almost enough money, actually, to get you into a diesel Accent sedan. Some may scoff at this base-model E offering as taxi fare, but with power windows, a stereo and 260Nm of torque, the lack of Bluetooth isn't going to matter all that much, right?

Also, before we dismiss this model as good enough only for taxi/fleet duty, let's remember that companies purchase these things not for their looks, but for their ability to keep going even after hundreds of thousands of kilometers. Their selling point is their supposed durability. Do we still have your attention? Let's find out if this hardy Hyundai is a viable value choice. 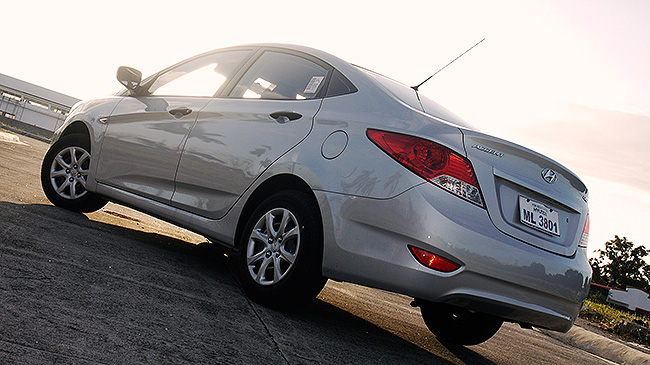 The Accent's bulldog stance and fluidic styling have never been as sexy as its Kia Rio stablemate or even the new Toyota Vios, but it's not an embarrassing car to be seen in. The best angle is from the rear quarter, where that strong character line terminates in a lovely wing-shaped crest.

The 14-inch wheels look puny within the arches, and the hubcaps don't look much different from those on an old Getz. Further cues marking this off as an "economy" model are black plastic door handles and foglight covers, though the "E" still gets rear reflectors, which look nice. 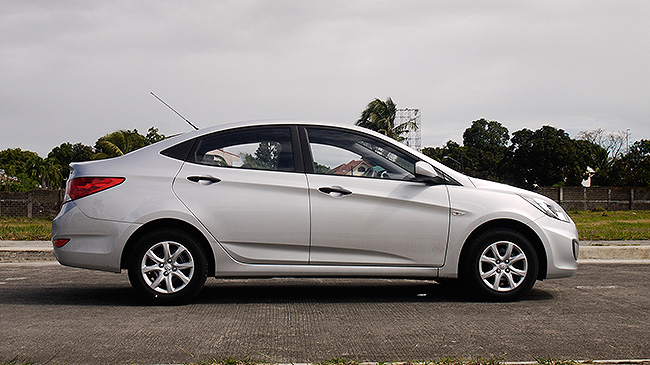 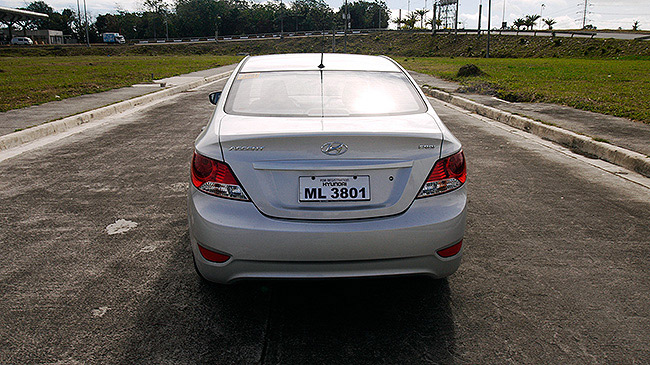 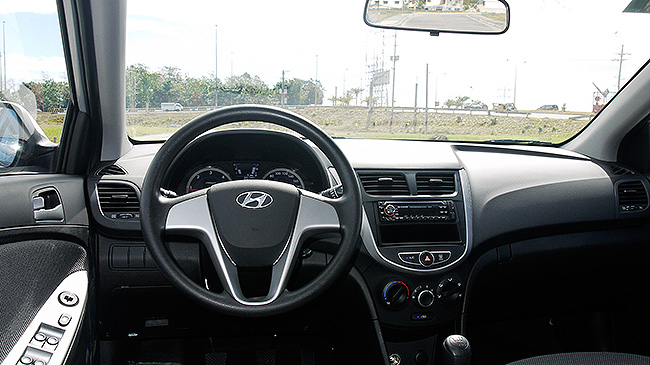 The no-nonsense interior is visibly bare, with lots of hard plastic and urethane. Still, it's well-designed, with lots of storage compartments. There's a deep bin under the console big enough for a camera bag, as well as multiple-cupholders and an extra shelf under the 1DIN audio head unit.

The dark-colored nylon-fabric seats are wash-and-wear sensible. Cabin space is still at the sharp end of the class, and only the Nissan Almera and the Honda City have more. Surprisingly, this "bare" unit gets power windows and power-adjustable side mirrors, as well as central locking. Not bad for a taxi, huh? 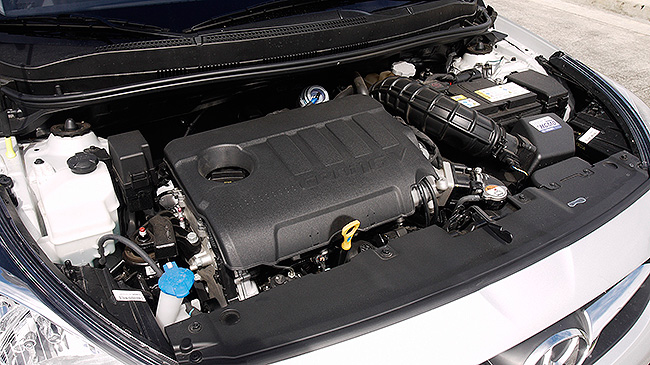 If there is one lasting impression the Accent leaves, it's that it's fast. Bloody fast. The boost comes on at just over 1,500rpm, and doesn't run out of breath till it's past 4,000rpm. Thanks to short gearing, the rush only starts to peter out at over, oh, 160kph. But as those speeds are illegal outside of a racetrack, that's not an issue, is it?

If there are any issues, it's that the engine feels strained off-boost, and the clutch and gearshift are a bit finicky. Accidentally selecting third gear when trying to find first is embarrassingly easy. 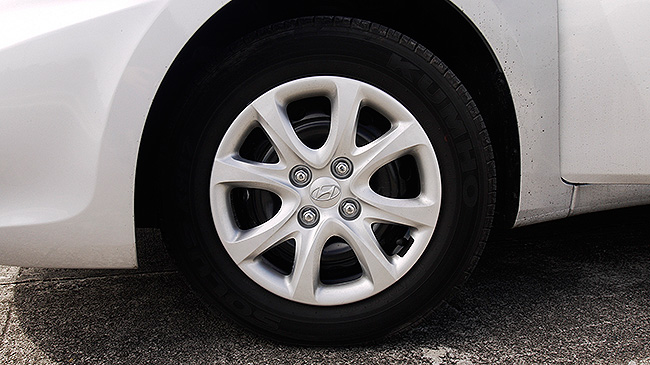 To cope with the extra weight of the diesel motor, the CRDi comes with a much stiffer suspension than the old 1.6-liter gasoline variant. It is on the boy-racer side of comfortable when unladen, but settles down a bit with a full load of passengers.

The Accent steering and handling have never been exciting, and despite the stiffer suspension, that doesn't change much. That'll be down to the cheap 175/70 R14 Nexen tires, we believe. At high speeds, there's little of the nautical drama of the old gasoline variant, merely a distant whistling as the sleek sedan slices through the air. 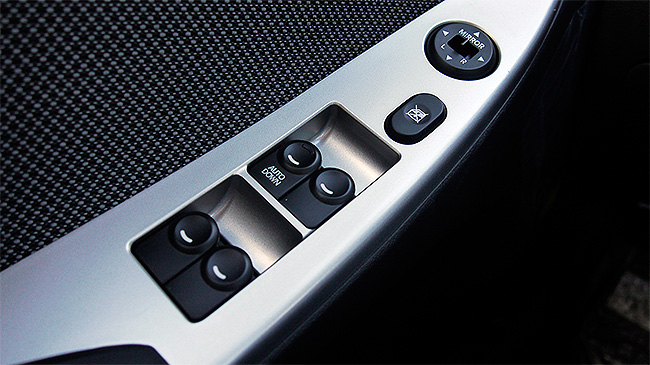 The E variant sedan is as bare as can be. While a Spartan four-speaker stereo, central locking, power windows and mirrors, and hydraulic power steering come as standard, there's little else. Not even an adjustable steering column.

Safety equipment is limited to the built-in Isofix points. Airbags and ABS are conspicuously absent. There's no keyless entry, and it's worrisome that the door locks don't pop open if you accidentally shut the doors with the locks engaged.

Despite the large trunk, carrying long cargo is out of the question, as the rear seats don't fold down on this variant.

So it's bare. Very bare. But the Accent CRDi is a three-star car with a five-star motor. I suppose you're wondering about the economy. Well, we got 20km/L in mixed driving: 11-12km/L in sweltering city traffic, and nearly 25km/L at 100kph on the highway. At 80kph, we consistently hit 30km/L. Those are similar numbers to the old 1.5 CRDi, from a car that's bigger, heavier and faster.

For hyper-milers like me, this is a dream come true, a hybrid killer that can hit 35km/L with the right techniques. For your typical enthusiast, however, driving like a bat out of hell without paying the price at the pumps is probably reason enough to take the plunge.

For most motorists, those fuel economy figures combined with the attractive price of diesel is something that's hard to ignore. All that's left to consider is whether you want practicality or a flashy ride. If it's the latter, then the Accent isn't for you.

Review: Mazda 3 Skyactiv 2.0 R
View other articles about:
Read the Story →
This article originally appeared on Topgear.com. Minor edits have been made by the TopGear.com.ph editors.
Share:
Retake this Poll
Quiz Results
Share:
Take this Quiz Again
TGP Rating:
/20