The grown-up sibling
by Jason Dela Cruz | Feb 6, 2014
CAR MODELS IN THIS ARTICLE 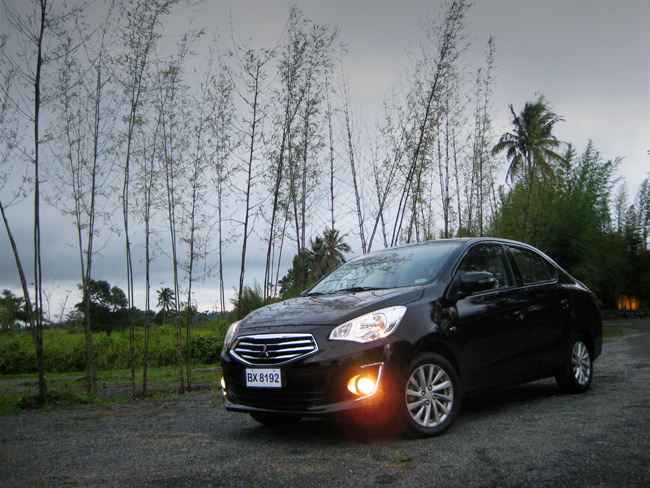 It's fair to say the subcompact hatchback category isn't complete without a particular model that has been absent for 30 years--the Mitsubishi Mirage. Since its arrival in late 2012, this hatch has not only offered a fresh approach on eco-friendliness and affordability (with top-spec subcompacts lingering around the P800,000 mark) but has also undercut the usual price tag. With the Mirage's success, it's a no-brainer for Mitsubishi to come up with a sedan version. After all, we're still a sedan-loving country. 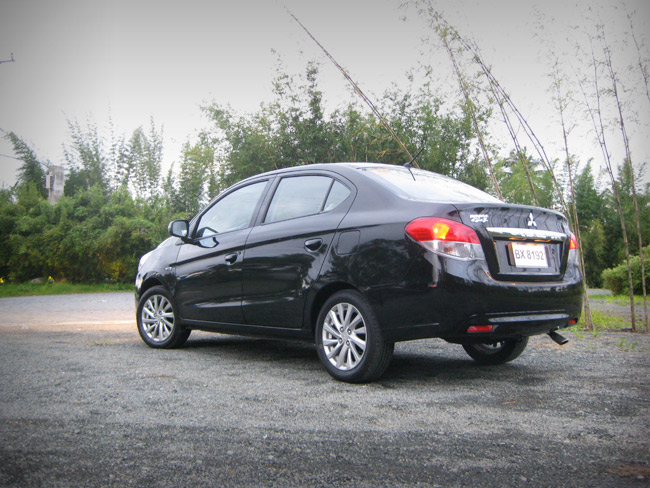 The Mirage G4 is naturally bigger and more practical than its hatchback sibling--4,245mm long, 1,670mm wide and 1,515mm tall compared to the hatch's 3,710mm x 1,665mm x 1,500mm dimensions. While the hatch possesses a playful character, the sedan has a more mature air about it.

The Mirage G4 has a chrome grille and sharper-edged headlamps. It likewise has a pair of soft creases on the sides, the upper thinning out approaching the taillights and the bottom thinning out to the front wheel arches. The profile flows nicely toward the rear, eliminating the inevitable hatchback-to-sedan stigma. The rear is clean, with large taillights and with clear indicators giving it a simple look. The sedan's larger dimensions also mean a slightly wider set of tires for the GLS variants: 185/55 R15 compared to 175/55 R15 for the GLS hatchback. 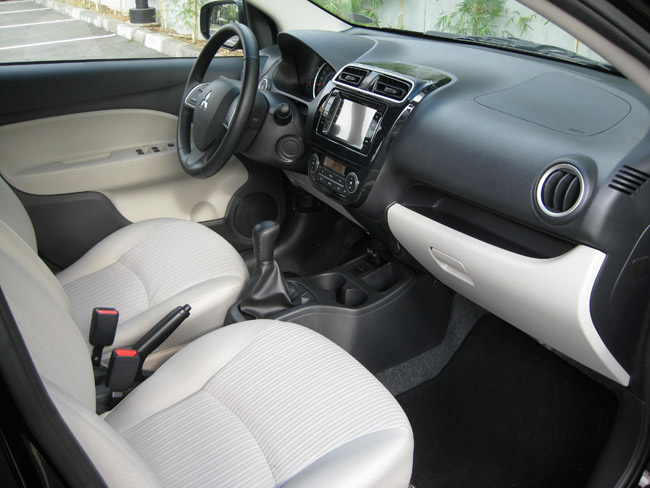 The inside is likewise more grown-up with a two-tone treatment, making the cabin look more elegant and spacious. There's more leg and shoulder room at the rear. Both models share the same dashboard, and the GLS gets a leather-wrapped tiller. The seats and door panels are garbed in tan fabric and plastic. Typical in this class are the hard plastics, yet the Mirage doesn't feel cheap. Silver accents and a piano-black finish center console give the cabin a more expensive feel. A minor downside is the lack of a vanity mirror on the passenger side, which female occupants particularly look for. Then again, Mitsubishi probably expects women to be driving this car. 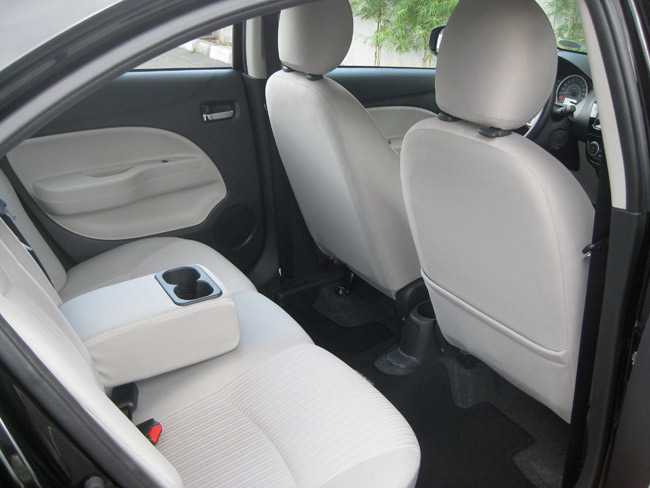 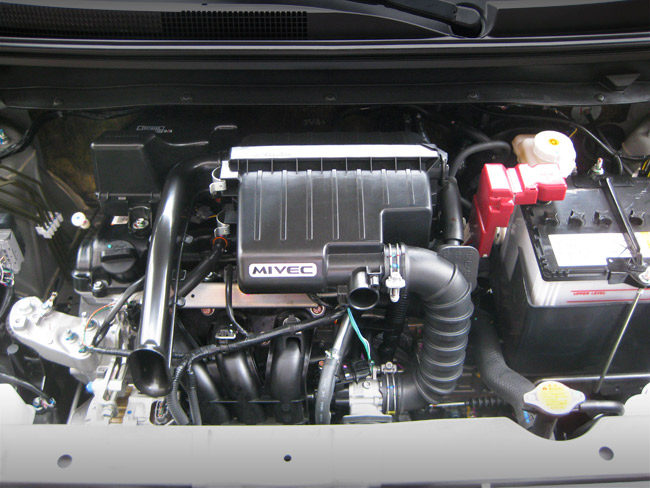 The G4's 77 horses may not sound too rousing, but this little car has very decent power, thanks to its power-to-weight ratio. Everything in the Mirage is about lightness. The clutch is light and just has that right amount of firmness to not strain your left foot during traffic, which makes the manual an easy daily driver, whether in traffic or when you want to have a bit of playtime. And the gearing is good if you decide to push.

The compact 1.2-liter three-cylinder DOHC MIVEC engine is primarily designed to be frugal. And it is. Around the city during the pre-holiday rush, the Mirage G4 yielded 8.3km/L to 9.5km/L. On SLEX one Sunday afternoon, we yielded a high of 24.2km/L, with the consumption reading lingering between 21.1km/L and 23km/L at 65kph to about 90kph.

This Mirage is nimble and agile. Steering is precise and the car goes exactly where you point it. Together with the transmission, it's enjoyable to throw around. The turning radius is also tight. No surprises with its efficiency--it's the handling that's equally impressive.

A slight downside is that the rear suspension tends to bottom when you hit a bump or an irregularity on the road surface if you have a heavy load in the trunk or there are five people on board. But overall, the ride is comfortable. 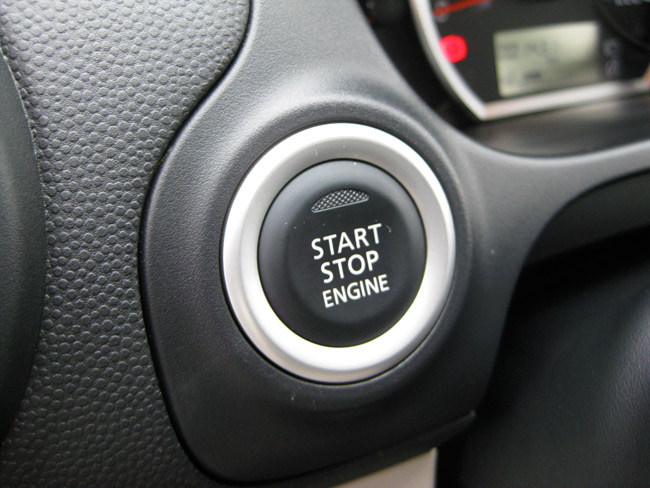 There's a list of features you wouldn't expect to see in this class. The GLS gets push-start ignition, automatic climate control, a touchscreen monitor, a multimedia system with auxiliary and USB connectivity, Bluetooth and GPS navigation. There are also operation buttons on the driver's door and trunk that are very convenient. The Mirage G4 GLS is a fun car to drive, and the goodies that come with it give it a wow factor.

The Mirage G4 GLS ticks all the boxes and punches above its weight. It's such a good car at a very good price point. It offers outstanding value, and you get so much for what you pay for.

UPDATE: Some readers have pointed out that the Mirage G4 has a vanity mirror on the passenger side, but the author distinctly remembers driving a unit with the vanity mirror placed on the driver side. We verified this with Mitsubishi Motors Philippines, and were informed that the unit we had tested indeed had a driver-side vanity mirror. "We can only conclude that the demo car was an early production unit," Jason dela Cruz says. "Since the cars come from Thailand, it was a case of the visors not being switched before the unit was exported to the Philippines."