Still a solid choice
by Andy Leuterio | Nov 19, 2012
CAR MODELS IN THIS ARTICLE 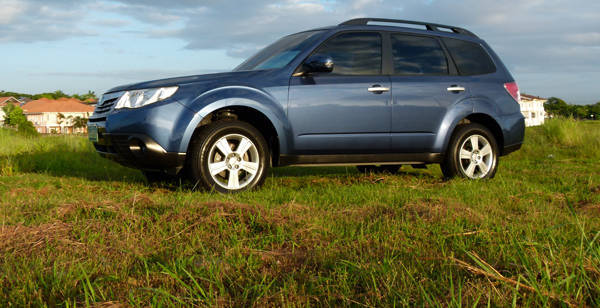 It's true that the next-generation Subaru Forester is coming next year. But if online reactions are any indication, the snarky new look may not be for everyone. For those who like the more classic style of the incumbent model, Motor Image Pilipinas still has the well-equipped, reasonably priced Forester 2.0XS.

It's not a hot-rod SUV like its turbocharged sibling, the Forester 2.5XT, but the less endowed 2.0XS is no pushover. I took it for a four-day drive around town, to the grocery, and up and down my favorite set of hills.

Here's what I can conclude. 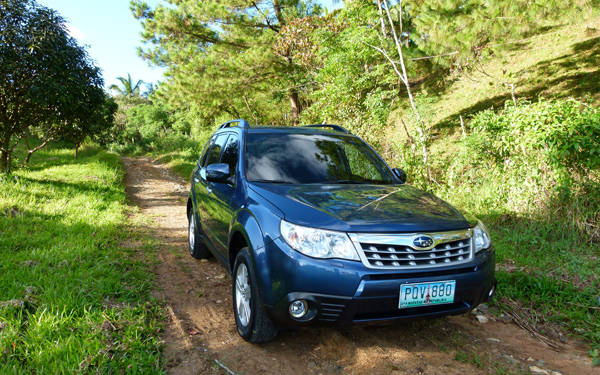 The current Forester's styling is rather familiar by now: a fairly conventional, "wedge-y wagon" design characterized by a large greenhouse area that works wonders for all-around visibility. The naturally aspirated Forester lacks the turbo version's hood intake, but pretty much everything else is preserved: The 16-inch five-spoke alloy wheels, which have nearly the same design as the 17's of the 2.5XT's, subtle fender flares, and dual tailpipes. The lower halves of the bumpers are durable--black plastic in anticipation of the scrapes and mud that they may collect over rough terrain. With 215mm of ground clearance, this Forester should be able to clear most low obstacles and minor floods with ease. 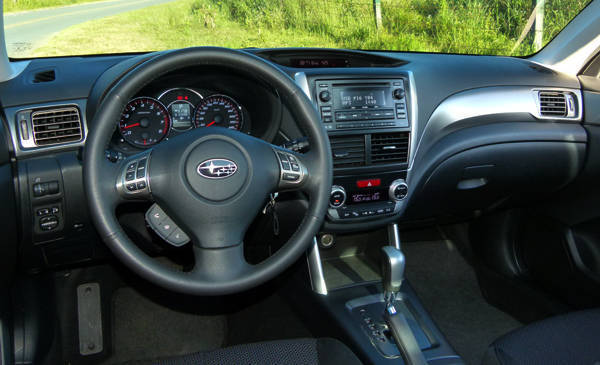 The interior is predominantly done in shades of black and gray a la vintage BMW. There's nothing novel about the dashboard design other than it has some attempt at sportiness with a couple of tasteful curves here and there, but the cockpit proper is a classic. Subaru fans will instantly recognize the Forester's shared genes with the Impreza STI in the way the three-spoke steering wheel perfectly frames the instrument panel and its sporty, sharply refined analog gauges. That wheel is a true pleasure to hold, with a leather-wrapped rim that's just the right thickness. Unfortunately, this is somewhat offset by the chintzy feel of some of the buttons and dials on the center stack, particularly with the dated looking stereo. 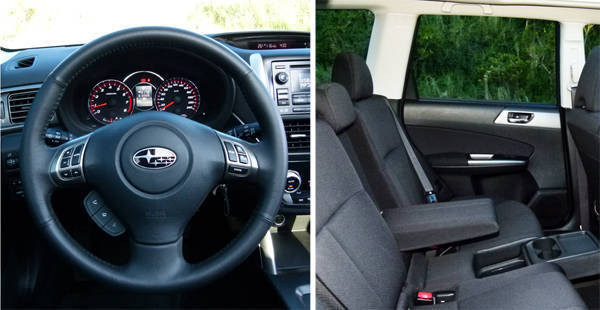 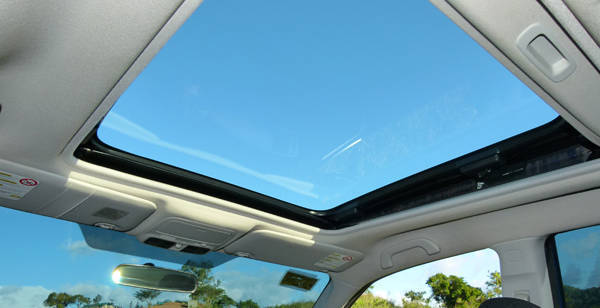 The extra-large power moonroof helps a lot in brightening up the otherwise droll cabin, and the rear seat has been thoughtfully designed, too. Since the middle is right over the driveshaft tunnel and must, therefore, be harder than the outboard positions, the designers made the most of it by incorporating both a fold-out armrest and separate cupholders. Subaru probably figured that few people would ever really sit there anyway.

Finally, the cargo area is one of the biggest among the compact unibody SUVs on the market right now. It can swallow up to four large suitcases or golf bags, and the 60:40-split rear seatbacks can be folded down to accommodate longer items like bicycles. While the seatbacks don't really fold completely flat, the resulting cargo area is still big enough for most weekend warriors' loading requirements. 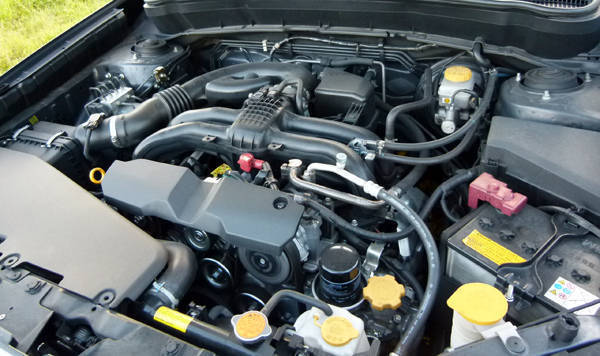 It used to be that 148hp from a 2.0-liter was something to crow about, but times have changed. Especially if one keeps thinking about the 2.5XT. As it is, this Forester has decent poke when you're just driving around town and getting up to speed if you're lightly loaded. Pack the SUV with people and cargo, and the engine has to work harder than usual. The same thing happens when the road goes up. It has the guts to go up at a respectable pace, but you'll have to keep the revs high. To its credit, the flat-four engine makes one of the nicest sounds among four-cylinder engines. It's a kind of whirring with a mild staccato beat that so strongly reminds me of a sewing machine (an expensive one, of course). Quite a change from the usual high-pitched whine of a typical in-line-four.

The engine is paired to a four-speed automatic transmission. Honestly, the concept of a four-speed in a modern-day car is fast becoming an oddity especially when newer models are offering five- and six-speed boxes. But in the Forester's defense, its four-speed automatic gets the job done. The torque converter works smoothly and quickly, and its limitations are really only revealed when you go into "manual" shifting mode.

On steep hills, I found myself staying too long in second gear to keep the engine speed at around 4,000-5,000rpm where it makes most of its power, since putting it in third gear would drop the engine speed to sub 3,000rpm. Not good when you want to maintain a fast pace. An extra gear or two would allow a closer gear ratio spread. It might also help raise fuel economy. I averaged 8.6km/L in mostly highway and light-traffic driving conditions. 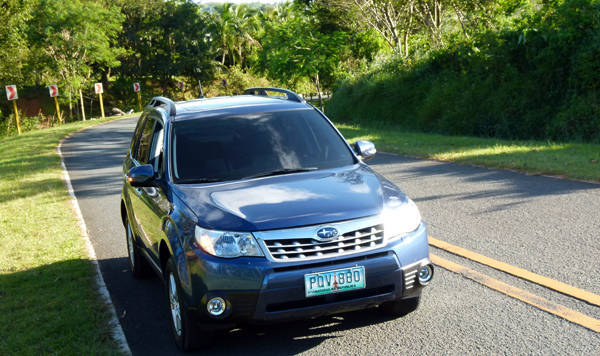 Driving dynamics are the Forester's strong suit. What it lacks in power, it makes up for with underpinnings that really love to be driven aggressively. The horizontally opposed engine has a lower center of gravity than an in-line-four. Pair that with all-wheel drive, precise steering and strong brakes, and you get a high fun-to-drive quotient. The car feels very balanced in the turns, and the extra traction afforded by the full-time AWD system lets you quickly get on the power after an apex. The all-independent suspension is on the soft side to soak up bumps and rough surfaces, but doesn't bob or wallow. The steering is only a little less sharp than in an Impreza, owing to its different mission in life, but it's still a pleasure to weave the Forester through a set of switchbacks. Brake feel from the large ABS-assisted discs is strong and easily modulated. The driver's seat is nicely contoured for good lumbar support and has side bolsters to keep you in place.

The Forester has a healthy list of standard features, including a two-DIN stereo with USB, auxiliary inputs and Bluetooth phone connectivity; high-intensity discharge headlamps; pop-up headlamp washers; a power moonroof; power-folding mirrors; tilt/telescoping steering column; cruise control; three 12-volt power outlets; and retractable cargo cover. Safety features include front, front-side and curtain airbags; ABS; active front headrests; and stability control. In the event of a frontal collision, the powertrain is designed to break away from the cabin, while the pedals will retract into the floor.

The current Forester may be showing its age relative to the new breed of compact SUVs today, but it's still a solid choice for buyers looking for a roomy, fun-to-drive SUV. While it's not the screamer in the Forester lineup, the rest of the package should still satisfy those who can live without the extra power (and cost) of the 2.5XT.

Review: Ford Explorer 2.0L GTDi XLT AT with EcoBoost
View other articles about:
Read the Story →
This article originally appeared on Topgear.com. Minor edits have been made by the TopGear.com.ph editors.
Share:
Retake this Poll
Quiz Results
Share:
Take this Quiz Again
TGP Rating:
/20