The spartan hybrid
by Niky Tamayo | Dec 6, 2012
CAR BRANDS IN THIS ARTICLE

To paraphrase a saying, two things are inevitable in life: expensive gas and taxes. With the Toyota Prius C (C for "City"), the former may not bother you too much, but the latter certainly will. While the C only costs some P900,000 in the United States and Japan, it starts at an eye-watering P1,475,000 here in the Philippines, mostly on the back of incredibly high import taxes. That's a hefty price for a subcompact car. But while you might never see a return on investment in terms of fuel savings, the Prius C is a fascinating study in energy conservation.

The C features that distinctive Prius look wrapped around a smaller body. An aerodynamic profile lends it a sportier appearance than the Yaris it is based on. Carefully positioned vortex generators and a distinctly channeled roof, which keeps air flow over the top of the car smooth, help achieve an impressive 0.28 coefficient of drag.

While the cheap blue "carbon fiber" sticker on the Toyota logo and the "Altezza" rear lights detract from the generally attractive exterior, the C looks like nothing else on the road. Which is kind of the point: This car is a rolling "green" fashion statement. 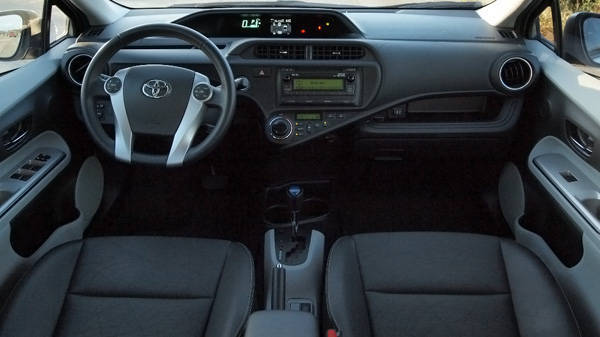 The interior isn't quite that dramatic. Instead of the space-wasting space-age console of the original Prius, there's a Spartan but functional dashboard, with cubbyholes and parcel shelves everywhere, finished in interestingly textured plastics.

Controls are well-laid-out, though the climate control and the radio feel like refugees from the '90s. The jewel-like shifter, on the other hand, is a welcome splash of color in a sea of black and silver. Slick vinyl-clad seats are supportive, and legroom is much better than in the Yaris. Thanks to the underseat battery pack, the rears don't fold flat, but cargo space is still pretty good. 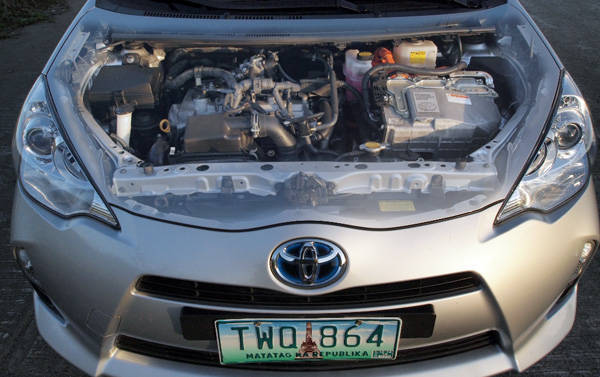 The motorized gas-electric tag-team provides 99 horses and a fat wad of torque, but the important numbers are at the pumps. Driving the Prius C is like an impromptu Eco 101 lecture. Rampant consumer spending (driving like a loon) overcharges the battery, making it bleed off electricity instead of storing it. Freeloading in EV mode depletes bank reserves quickly, which must be recharged via punitive gas taxes. Conservative driving in Eco mode is best. It keeps unnecessary expenditures in check and nets a healthy 25-28km/L return on investment. Austerity measures (AC off) make 35km/L possible. Only sub-liter cars even get close. 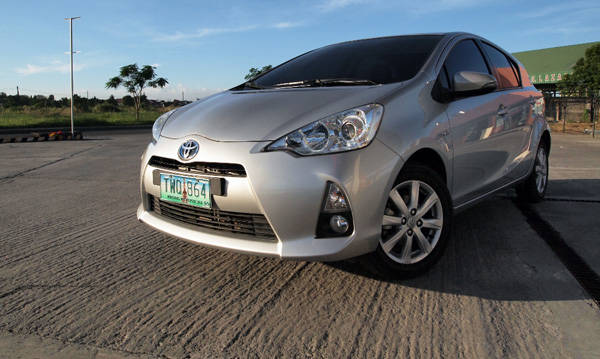 A firm but supple suspension makes the Prius C steadier than a Yaris over undulating roads, and allows it to clear humps with ease, even when fully loaded. And despite the skinny tires and loose electric steering, it drives better than the Yaris, too. The neutral balance and strong brakes make it a willing accomplice down a winding road. And a good workout pays dividends in terms of extra battery charge for the next commute.

The Prius C is probably the best-driving small Toyota today. Unfortunately, it just happens to cost nearly as much as the actual best-driving Toyota, the 86.

When we say the Prius C is spartan, we mean it. There's push-button start and keyless entry, but the stereo does a credible job of looking and sounding almost exactly like the one in the Vios. With cruise control but no backing-up sensors, the C probably has the motto "No retreat, no surrender," which is definitely Spartan.

What you're paying big money for is Hybrid Synergy Drive--and its accompanying multi-mode eco-display, which is good for hours of distracted-driving eyes-off-the-road fun. No commute is boring when you're trying to eke out that last iota of range from this feisty hybrid. Madness? This is Prius C!

Though frugal and fun, the Prius C would take over 200,000km in heavy traffic to recoup the purchase differential versus a Vios. And that's before you consider eventual battery replacement costs.

This makes it more of a toy for tech-heads and greenies who would otherwise not care about motoring in the slightest. Penny-pinchers need not apply.

Perhaps, once tax breaks from the Alternative Fuel Vehicles Bill take effect, the Prius C will be affordable enough to make sense. But until then, it will remain a rarer sight on city streets than the 86. Shame, as it really is a nifty little car.

Review: Hyundai Genesis Coupe 3.8 V6 8AT
View other articles about:
Read the Story →
This article originally appeared on Topgear.com. Minor edits have been made by the TopGear.com.ph editors.
Share:
Retake this Poll
Quiz Results
Share:
Take this Quiz Again
TGP Rating:
/20