Pushing the crossover envelope
by Niky Tamayo | Aug 10, 2014
CAR MODELS IN THIS ARTICLE 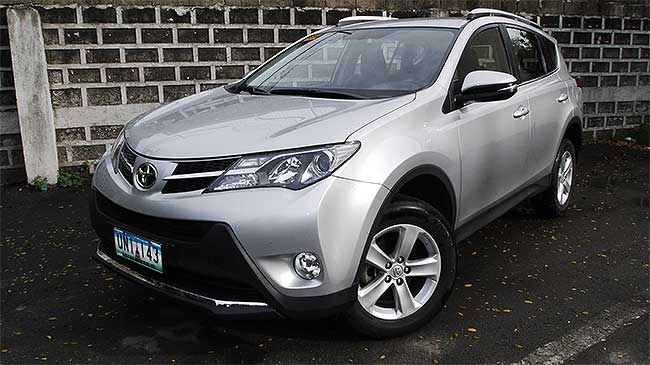 There has always been some controversy as to which exactly was the first crossover, the Toyota RAV4 or the Suzuki X-90. The minutiae as to what differentiates a crossover from an SUV mean that there's no easy answer to that question.

What isn't up for debate is that the RAV4 is the most successful of the first crossovers, a success that paved the way for the Honda CR-V, the Subaru Forester and the insane number of compact crossovers coming out nowadays. Yet while new crossovers like the Ford EcoSport echo the cute and compact RAV4 of decades past, the current Toyota SUV is now one of the biggest in its class, rivaling even seven-seat crossovers from other manufacturers. 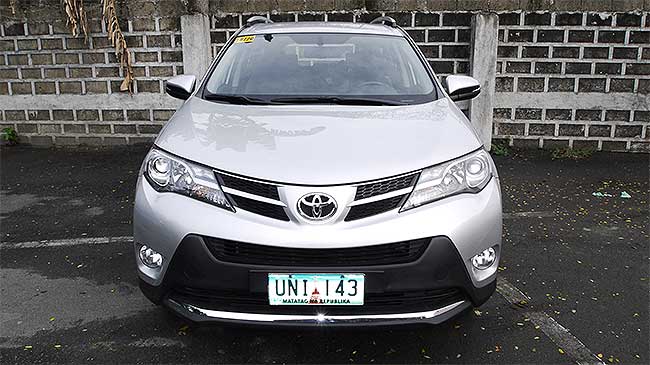 The original RAV4 was a stylish little runabout, and the second-generation model built on the same theme. The car that followed it was an excellent car, but somewhat forgettable.

While the new RAV4 is similar in size and carries a similar stepped rear to the previous car, it's anything but forgettable. The pointed snout and dynamic rising beltline give it a very sporty air. It's only that flat expanse of outmoded sheet metal below the lovely taillights that looks out of place. Also, this is a big car; 17-inch wheels just barely manage to fill the RAV4's huge wheel arches. 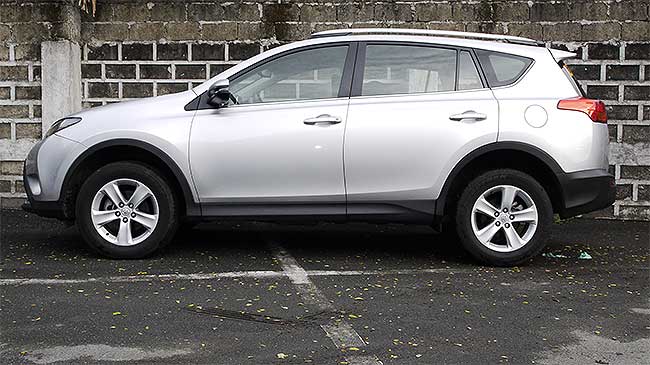 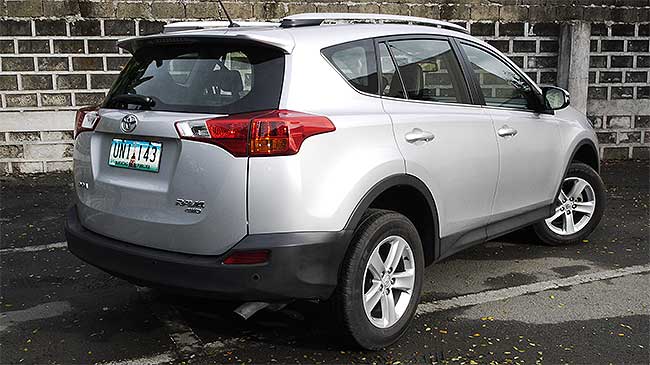 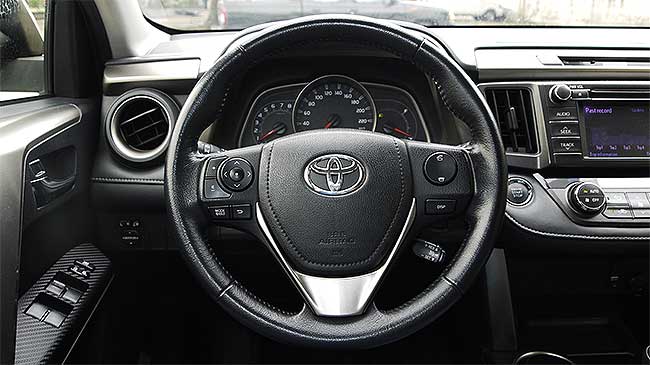 Like the previous RAV4, this Japanese-made car certainly feels upscale. Where other crossovers make do with soft-touch plastics, the RAV4 has a wave of stitched leather flowing across the dash, matching the hide on the doors, steering wheel and seat. The "carbon-fiber" trim, however, had been passé even before this model launched.

The interior itself is functionally appealing, with quirky touches here and there. Seat space is among the best out there, although the rear is a bit narrow. On paper, the trunk trumps the cavernous CR-V, but the full-size spare tucked underneath the sloped floor makes for a pretty high loading lip. 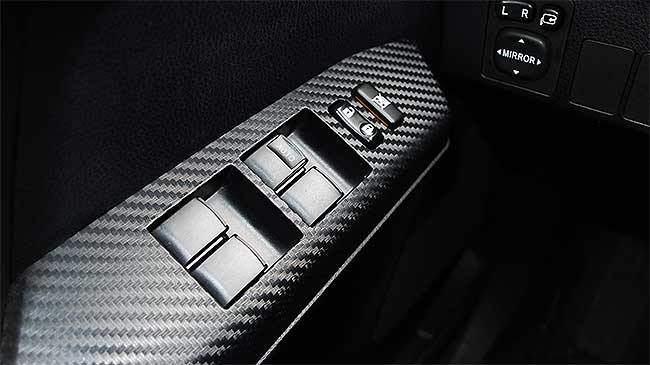 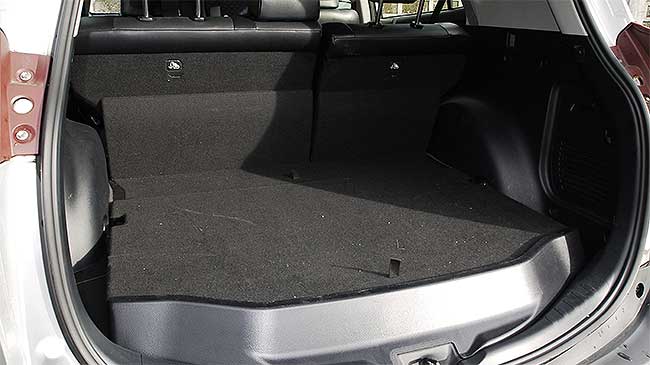 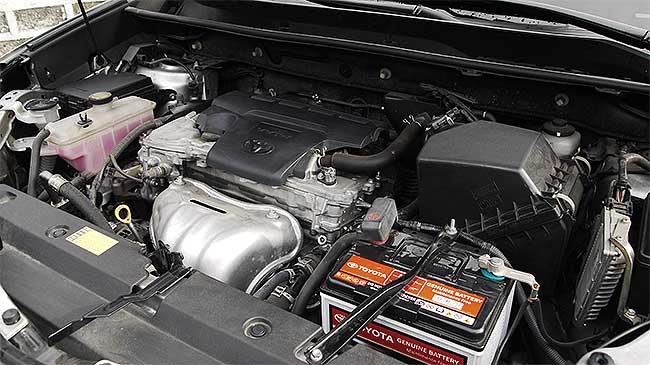 The RAV4's big 2.5-liter motor mated to a six-speed automatic, makes all the right noises and pulls cleanly until redline. It's also nicely responsive, and the manual shifting mode is actually useful, and allows you to lug along, locked into a high gear at low engine speeds for better economy.

Fuel economy is still limited by the fact that this is an auto-equipped all-wheel-drive vehicle, but 16km/L or greater is possible at 80kph, though in-city economy is still in the 6-8km/L range, depending on traffic, even with Eco mode. 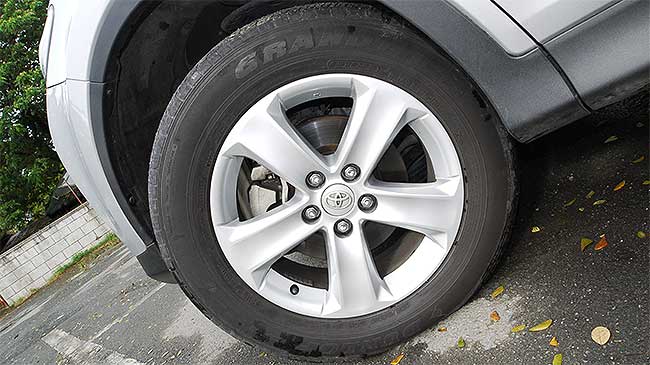 The RAV4's position on the sport-to-comfort continuum has varied over the decades. The late '90s RAV4 was pretty stiff. The previous model was wonderfully compliant. This one moves a notch or two back to the stiff side. While this makes it a bit juddered over washboard surfaces, it still rides pretty well.

It possesses surprising nimbleness around town, and it's a fine car to thread through traffic. Ultimately, however, the RAV4's height, body roll and squidgy 225/65 R17 Dunlop Grandtrek tires make it less thrilling to pilot down a twisty road than something like a Mazda CX-5 or a Subaru XV.

(Read our reviews of the Mazda CX-5 and the Subaru XV.) 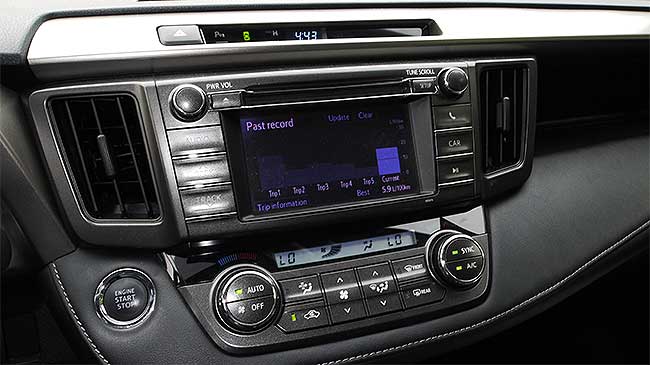 That said, halogen-only projectors, a lack of backing-up camera or tonneau cover, and the rather small 17-inch wheels do make you question the high price tag.

Though still not the most exciting crossover to drive, the RAV4's spacious interior and newfound confidence make it one of the best and biggest family-oriented crossovers out there. While the price remains a sticking point, as with the previous car, the extra toys and tech go some way toward justifying it.

But then, there's that diesel SUV sitting on the other side of the showroom. One might ask: Is the 4x4 RAV4 a higher quality car than a 4x4 Fortuner? Undoubtedly. Is it worth the nearly P200,000 price difference? That's the P2-million question.

UPDATE as of May 8, 2018: We wrote about Toyota Motor Philippines' updated price list in response to the Tax Reform for Acceleration and Inclusion Act (TRAIN), as posted online by one of its dealers. The Japanese carmaker updated its website to make those prices officially official. If you want to see the new price list again, click here. Now, given the tricky nature of vehicle pricing, not all of Toyota's prices increased by the same margins. In fact, some of models even became cheaper. If you've been wondering how much you'll need to pay this year for a new Toyota, we'll keep you posted.