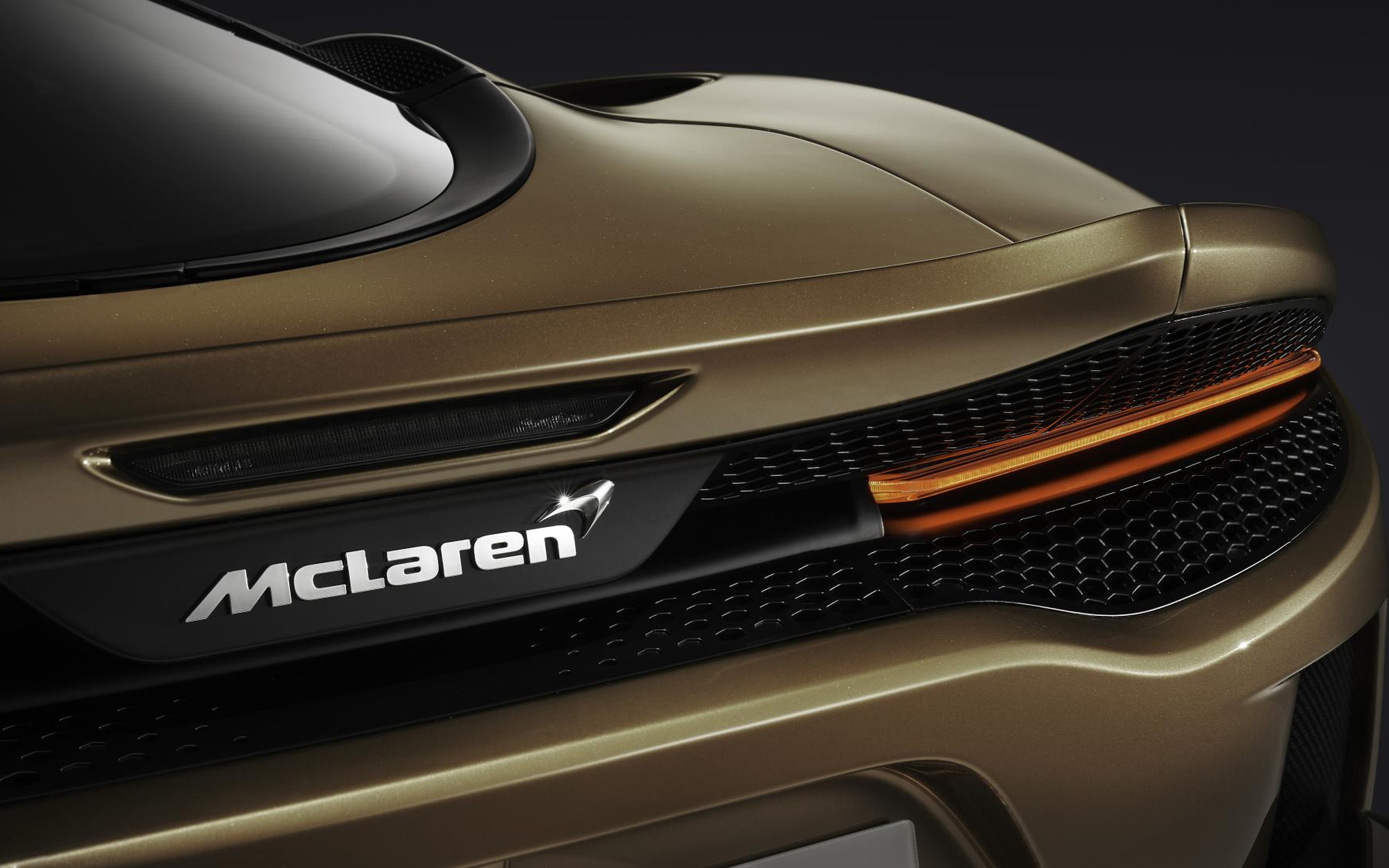 ‘At first glance, this is certainly a McLaren’

What you want is a specialist. If a business has a focus, you trust it. Dine at a restaurant with a long rambling menu and you’re being a fool to yourself. Perhaps, somewhere in the world, the kitchen does exist that simultaneously excels at Napolese, Gascon, Sichuan, Bengali, and Mexican cooking. But far more likely at a place with too many options, the arrival of your main course will be heralded by the ping of a microwave.

There are, metaphorically speaking, no microwaves at McLaren. (Only autoclaves.) McLaren’s specialism is the carbon-tubbed, V8-engined, two-seat supercar. It does it brilliantly. But does the world congratulate Woking for that strategy? No, it wants a one-stop-shop, endlessly pestering them for a front-engined car, or a four-seater, or a bloody SUV. 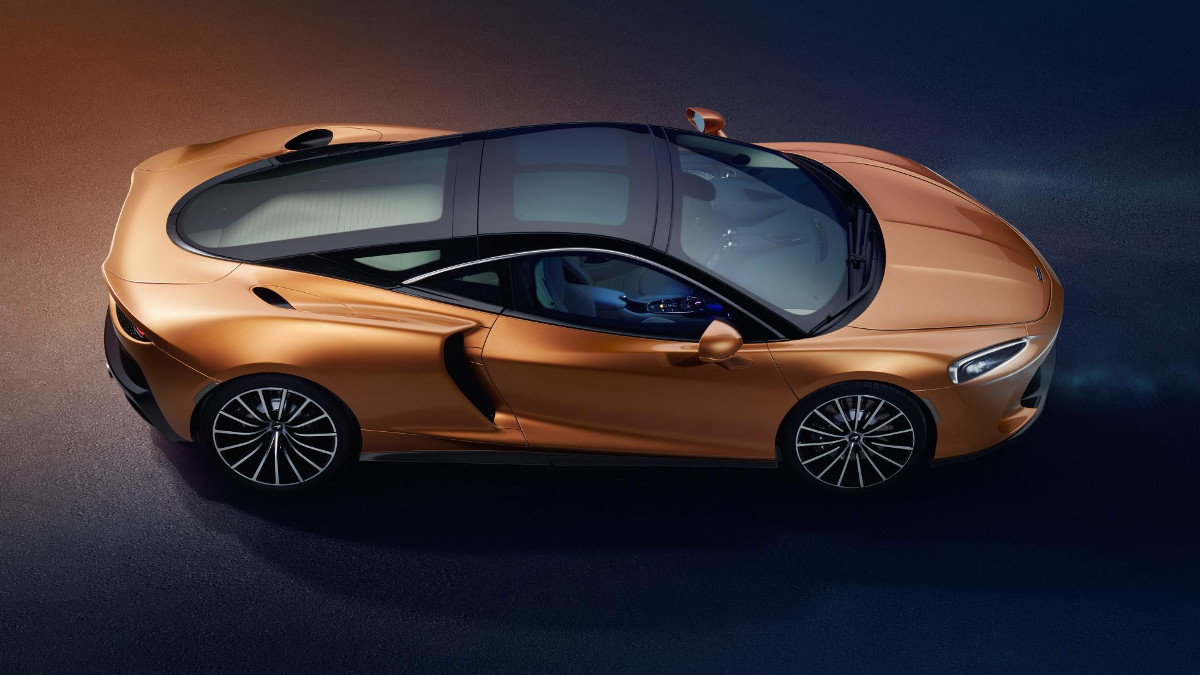 And, to be fair, you can get a little lost down the McLaren supercar rabbit-hole. So many variations, and not a vast difference between many of the sub-species.

That happened with the 570GT, which was claimed to be a long-distance everyday-use version of the 570S, but was hardly any different beyond the more accessible boot. Basically you can have your McLaren hot (570/600 series), boiling (720) or plasma (Senna).

The Speedtail indicates the beginnings of diversity. Having not driven it, we don’t how the notion of a ‘hyper GT’ will actually feel in practice. But there’s real differentiation in the centre-driver three-seat package and in the styling – a very speedy tail indeed.

And now here’s another McLaren for a fresh purpose. A car to be used more often, or driven for longer distances. More convenient and comfortable than the others. The McLaren GT. Bet you didn’t see that name coming, did you? 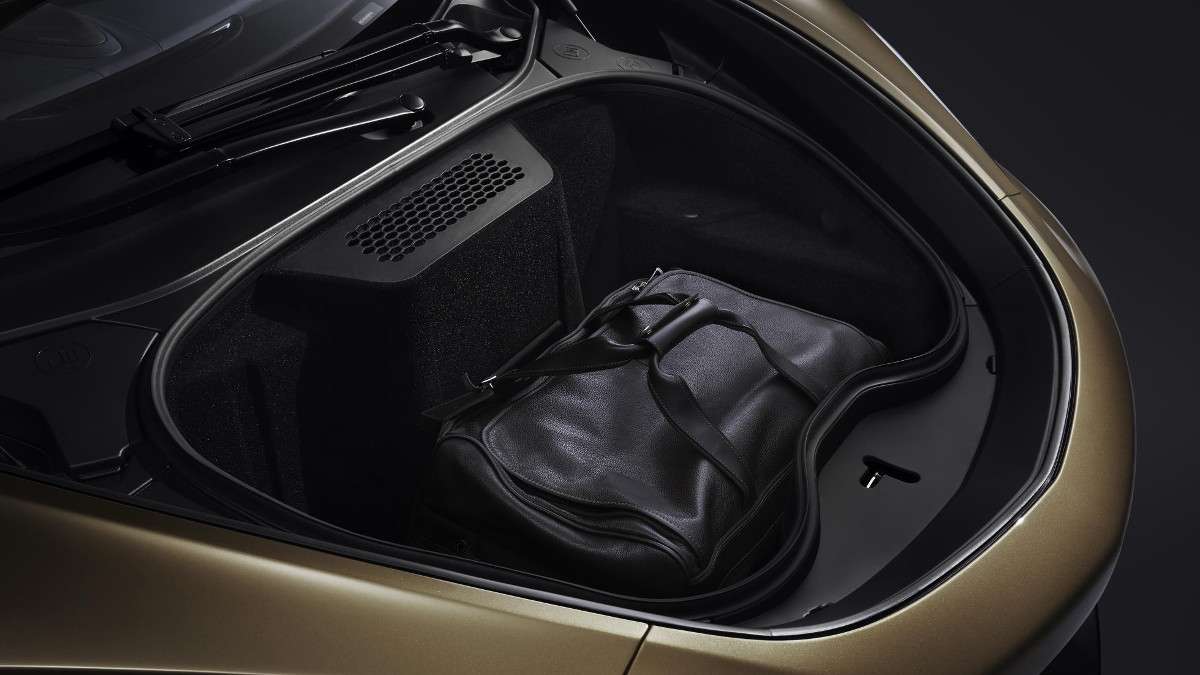 If McLaren has nailed the usability thing, this new car will be sitting pretty. Look at the cars McLaren says are rivals: the Aston Martin DB11, the Ferrari Portofino, the Porsche 911 Turbo S, the faster and more focused strains of Bentley Continental. All of those are significantly heavier and so more compromised as sports cars.

And, oddly enough, they have a lot less trunk space than this new McLaren. So that’s Woking’s pitch: more usefulness than the others, and more sportiness too.

At first glance, this is certainly a McLaren. But if you look for a minute or two longer, it’s obviously a different sort of McLaren. It’s longer and bulkier than the pure supercar silhouettes that are Woking’s habit. The aerodynamics are less visually explicit. As for the cabin, while McLaren doesn’t go for ruched-leather opulence, it’s fair to say the GT does do a nice line in minimalist luxury.

The Gran Turismo originated 70 or 80 years ago by taking a racing car and adding a body that’d carry a couple of rich people in more comfort. Today, too, McLaren emphasizes performance. CEO Mike Flewitt boldly claims the new car “combines competition levels of performance with continent-crossing ability, wrapped in a beautiful lightweight body.” 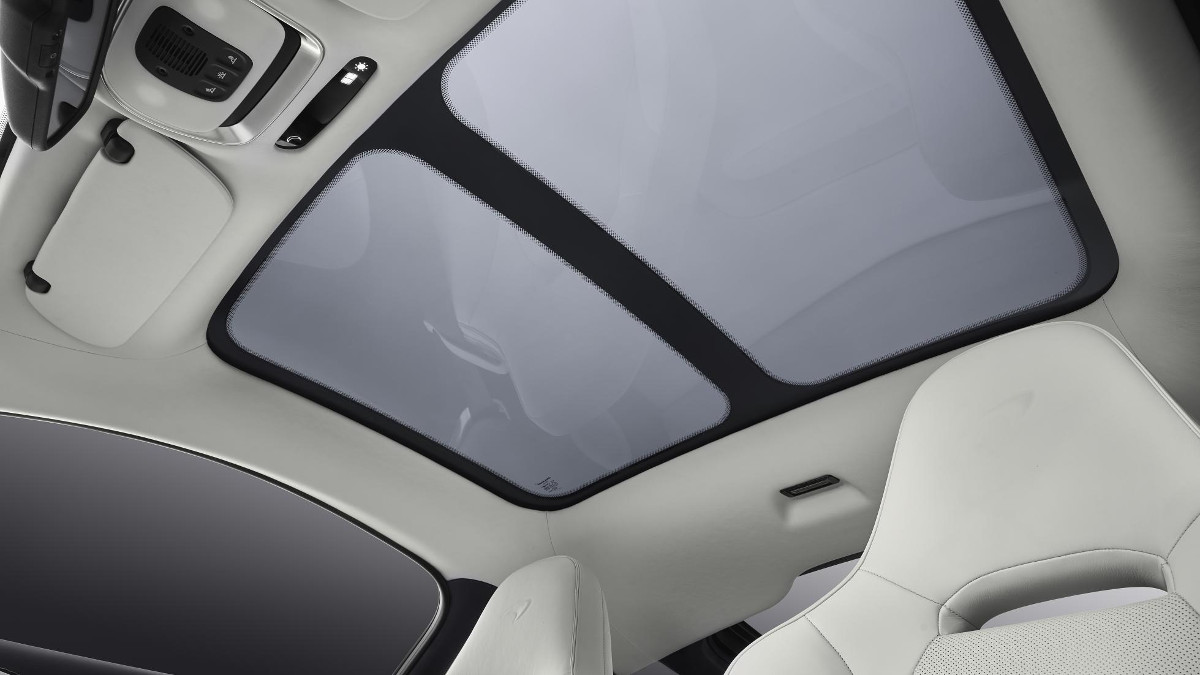 These days, most of the rich fly rather than undertaking long drives, but that doesn’t stop us getting all wrapped up in the romance of the roadtrip. Imagine swapping the hassle of the airport for the mesmerizing rhythm of miles passing under a McLaren’s tires.

Flewitt adds, “It has been designed for distance and will provide the comfort and space of a Grand Tourer, but with a level of agility never experienced before in this segment.” As you travel the flat routes of Northern France, the Alpine passes temptingly await.

Anyway, if few people actually use their cars in this way, they certainly do buy machines designed for the job. In the £100,000–200,000 price range, more than double the number of Gran Turismos are sold annually than pure sports cars. McLaren so far has only really operated in the pure-sports arena, so it clearly has an opportunity with this £163,000 (around P10.9 million) GT. But if the established GTs all reject the mid-engine layout, how can McLaren compete?

Space is the most significant part of it. I challenge Rob Melville, McLaren’s design director, that GT buyers want a 2+2. Which rules out a mid-engined car – it hasn’t been done since the Ferrari Mondial. “No, people want a GT like in The Italian Job. They want light weight, beauty and luggage capacity. The back seats are only a way to justify the purchase; they’re never used to carry anyone.” 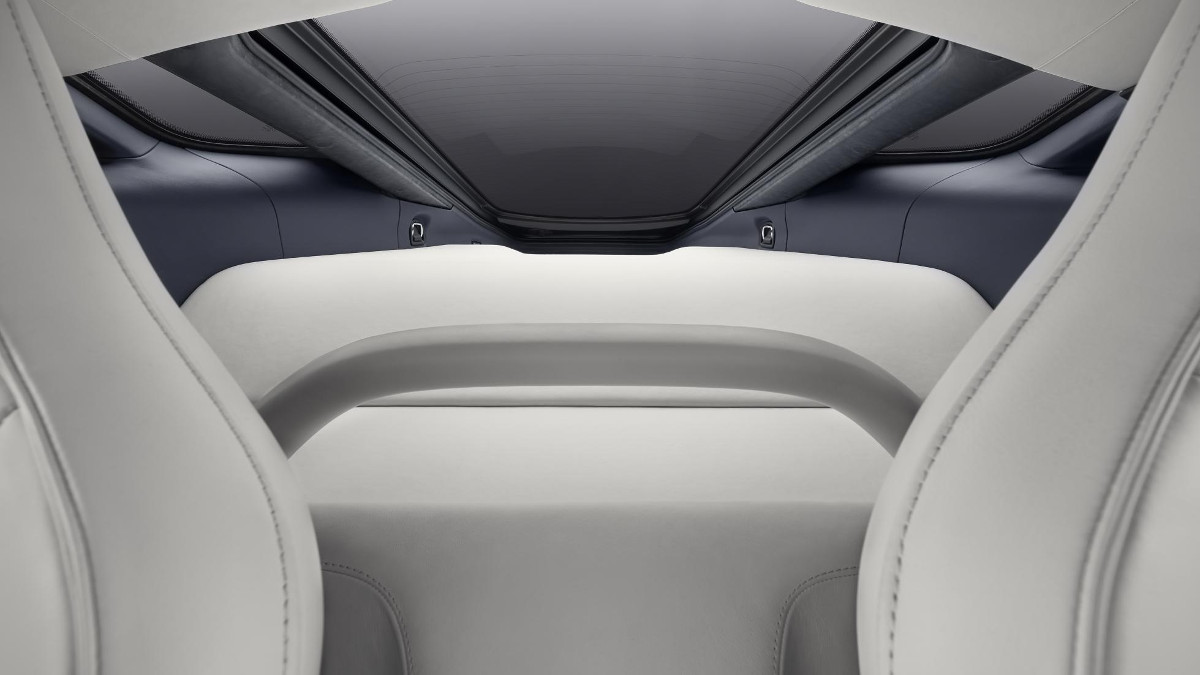 Instead, Melville points to ways his new car has considered the real needs of buyers. The seating position has been raised, so getting in and out doesn’t tax your gymnastic skills. Critically, the top of the engine has been lowered, by reducing the height of the intake system, enlarging the cargo space above it to 420 liters, plus there’s another 150 liters at the front of the car – 570 in all.

We don’t usually bang on about trunk size in supercar features, but there’s an interesting story in the following numbers: less than 300 liters for the Portofino and DB11, 358 for the Continental, 115 for the 911. It’s why people use the so-called rear seats as luggage bays.

That’s why the GT is bigger than the 720S. Melville says his team added to the length of the rear end so as to enclose the luggage space, and then they added to the nose to give visual balance. Melville says of the overall design, “It has a formal dynamic, which shows it’s race-bred but tailored. The higher nose gives a horizontal theme, not wedged like our other cars. The front fender line is a falling one, washing into the door. It’s a bigger car so it has bigger wheels, at 20 and 21 inches.” Overall, it’s 4.68 metres long, which is still shorter than the Aston.

Several other design choices help make it useful in daily life. To avoid scraping on car park ramps, the nose is high off the ground – with the optional lift kit, the angle is the same as a Merc C-Class. Visibility is clear in pretty well every direction. Because of the hatchback, there won’t be a convertible version, but as small compensation, an electrochromic glass roof is on the options list. 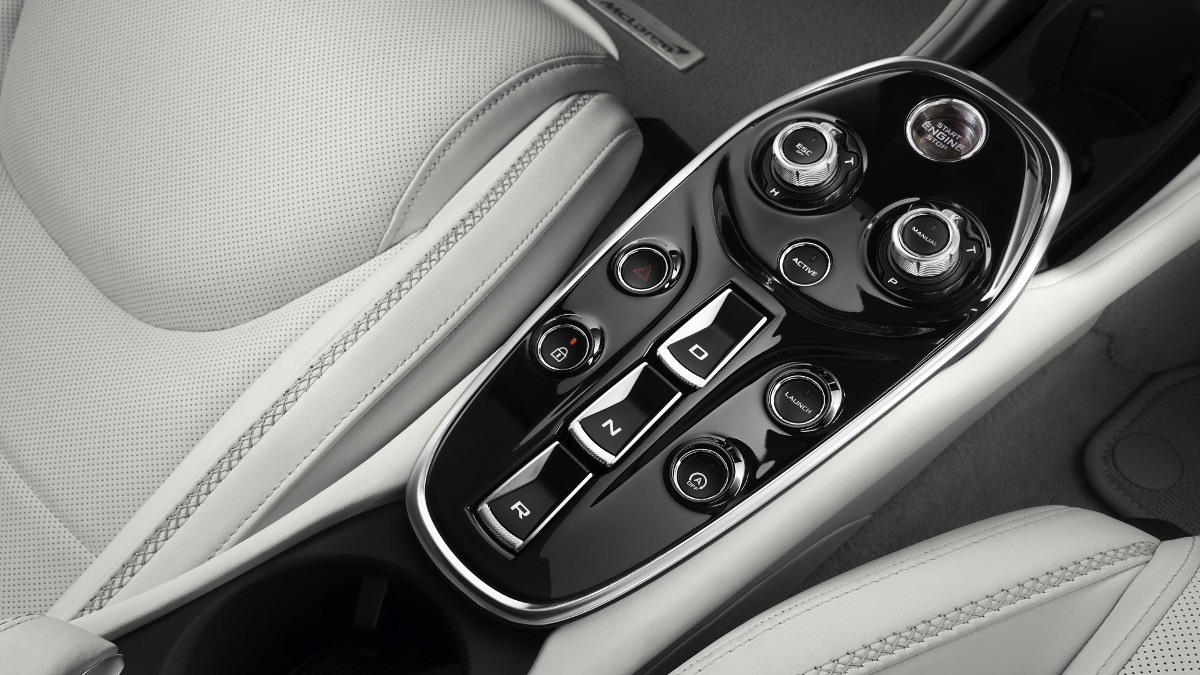 Now the mechanics. This isn’t just a softened version of the 720S suspension, although the springs and dampers are of course recalibrated. The steering has different geometry to better hold a straight-line cruise. The tires are a special quiet design, and winter tires can be had.

The brakes are steel discs, not composite, because many people prefer them for the road. A new servo calibration also makes them easier to use smoothly at lower road speeds. New front suspension top mounts add cushioning against small bumps. New soundproofing and sound-absorbing glass is used. The engineers say it’s a quieter car than the Ferrari and Aston Martin.

You’re meant to hear the engine, of course. New intake and exhaust systems give the sound a deeper timbre than in the other McLarens. The compression ratio has been raised, for response, and for the same reason the turbos are a low-inertia type. Max power isn’t the primary aim. It’s about broad and easily used torque response. 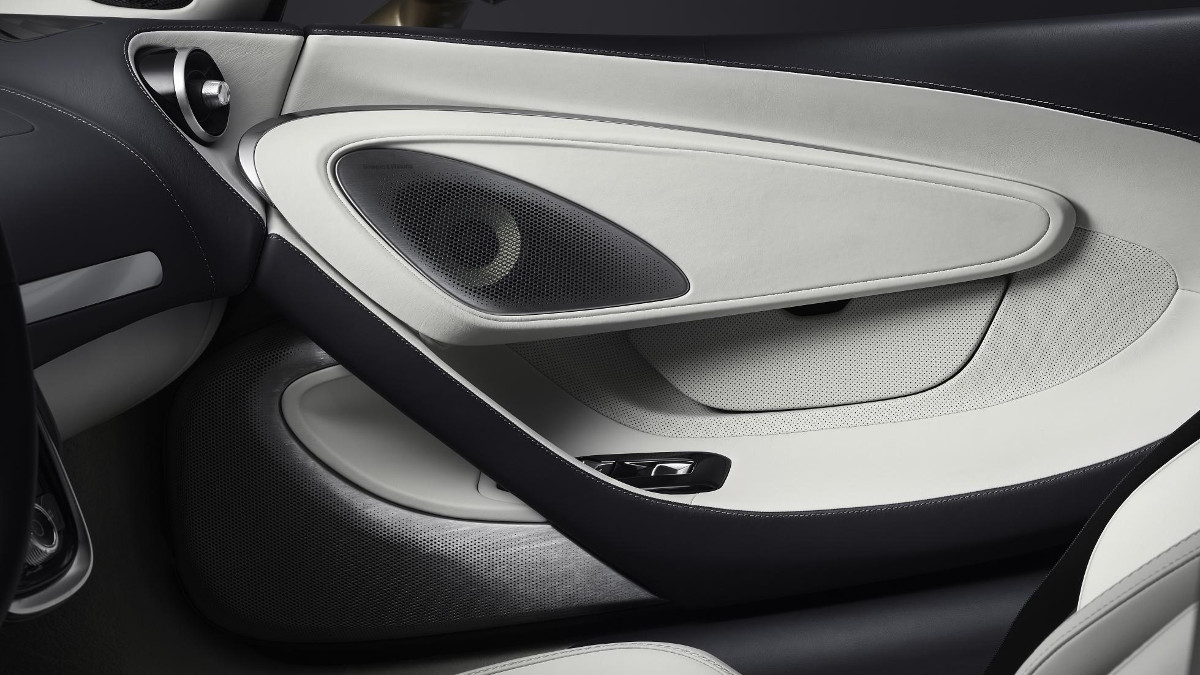 I swing open the door, up and forwards as in all McLarens. But in this one, the final closing is gently power-assisted. There’s posh. One of the seat-trim choices is a processed form of cashmere, a first in a car. Upholstering the trunk is hard-wearing stuff called SuperFabric developed for NASA.

The cockpit control knobs are solid milled aluminum, and aluminum touch switches sit overhead too. Ambient LED light softly highlights the interior’s contours. Storage compartments, some behind upholstered lids, are lit from within and more numerous than in supercars.

The ‘active dynamics’ selection panel of other McLarens is present, which is a good thing. In contrast, their usual infotainment system is absent. Also a good thing. In its place is a new touchscreen system powered by 10 quad-core processor chips that make it five times more responsive. It uses high-res mapping by industry leader HERE, and real-time traffic info. That’s vital for a car that’ll be taken on long journeys. A Bowers and Wilkins hi-fi is part of the spec.

Driver-assist features are conspicuously absent. No lane-keeping or active cruise control. I ask why and am told only that they’re ‘under investigation’ for later updates. Look, life in a GT isn’t all glam and, if well executed, those systems make a car more relaxing in endless speed-camera’d highway roadworks.

The structural tub is carbon fiber but the skin is aluminum, its aerodynamics considered with McLaren’s usual care. Compared with the cutlery-drawer design of the Senna, the outcome here is a whole lot less overt. The GT’s relatively subtle role in life rules out much obvious spoilerage. At the front, we see the intakes for the intercooler air, below the slim headlights. The high-temperature engine-cooling radiator intakes sit on the broad hips. Heated engine-bay air flows out through the tailgate, between its inner and outer skins.

So what’s the result of all this? The engineers produce a diagram showing how the new car measures up against the 720S supercar. Lines on the chart show a sizable (but unspecified) deficit against the 720S for lap time, but a smaller one in straight-line performance, and a smaller gap again in subjective engagement of the powertrain and chassis. Those are the swaps for the new-found practicality and comfort.

Seems a fair choice. It’s not that the McLaren English Sunday Roastery has suddenly set up a pan-Asian fusion street food cart. It’s just that they’re now doing lamb as well as beef. 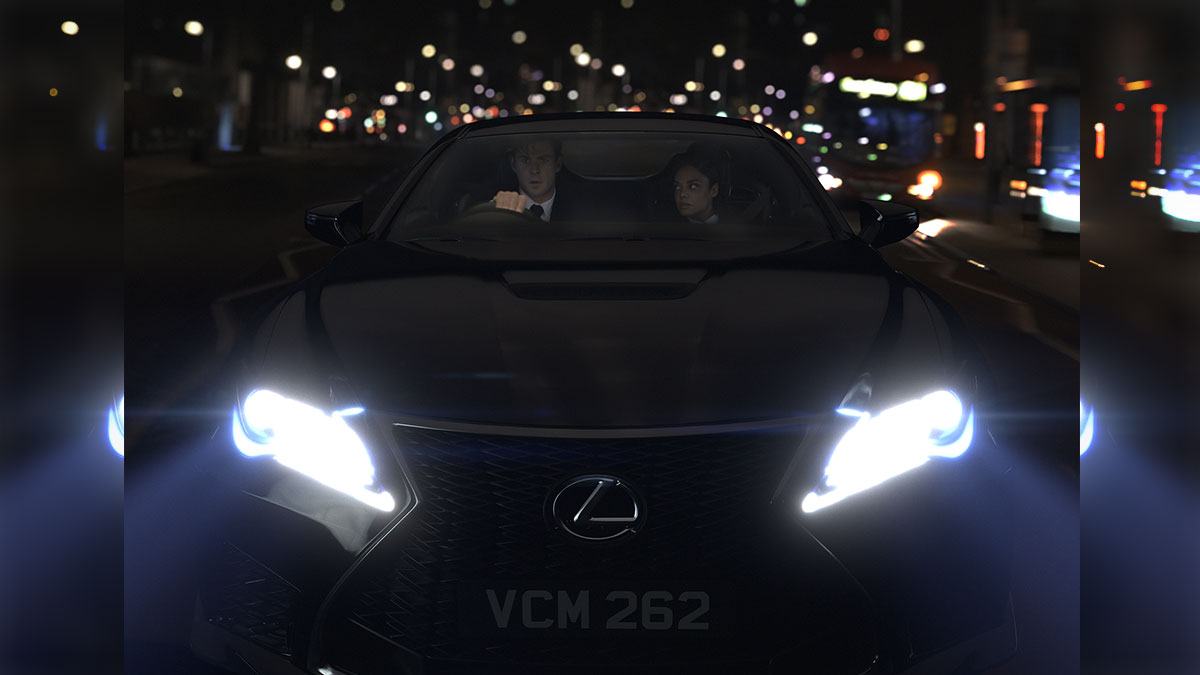 The Lexus RC F stars in the latest ‘Men in Black’ film
View other articles about:
Read the Story →
This article originally appeared on Topgear.com. Minor edits have been made by the TopGear.com.ph editors.
Share:
Retake this Poll
Quiz Results
Share:
Take this Quiz Again
TGP Rating:
/20