A look back at the Honda City

It uplifted the segment to luxury heights
by TopGear.com.ph | Feb 18, 2019
CAR MODELS IN THIS ARTICLE

We have a feeling this generation Honda City was better received than the road-going starship that was released in 2002. For starters, it looks fantastic—superficially similar too but sleeker than its conservative predecessor, with deep cutaways and character lines. The taillights, in particular, are incredibly sexy, though somewhat Bimmer-ish. As is the gigantic shark-fin antenna. Dramatic relief-cut alloys echo the aero theme of the Vios wheels, but they’re a usefully larger 16in. A solid grille bar and a small lower grille give the City a more streamlined look and less air-intake area than the Vios. Honda uses a dual-fan setup and a larger radiator for cooling.

The City is simply that kind of car: filled to the brim with Honda’s overachieving engineering focus. It’s a focus that’s evident the moment you brush those touch-sensitive door handles and feel the doors unlock; one that sharpens as you adjust the tilt-and-telescopic wheel and marvel at the Japanese typically impressive ergonomics; and one that becomes crystal- clear when you push the button that starts the engine.

It’s the same variable-valve, single-cam engine as before—a gruff, 1.5-liter that produces power (for a non-turbo mill, that is). But the CVT to which it’s attached? That’s completely new—and rather cool, to boot. With clever integration of throttle control, shift logic and a torque converter, it feels like a very good traditional automatic. That torque converter allows it to handle higher loads than the old dry-clutch CVT for more enthusiastic performance. While it still feels a bit buzzy under full-bore acceleration, it gets past 160kph right quick. In daily use, it launches smoothly without slurring, “holds” gears in manual mode for crawling at under 1,500rpm, and bangs through those gears with enthusiasm as you go flappity on the paddles.

This City feels at home on twisties. The electric power steering, possibly inspired by the CR-Z, is fingertip-light, yet builds weight more naturally than in the old car. It comes to life when stringing together hairpins on a mountain road, with strong self-centering and even a smattering of feedback from the tires. The brakes are grabby but strong, despite the rear drums. The suspension, though a bit stiff-legged at low speed, exhibits exceptional absorbency over broken surfaces.

On the highway, the City is an accomplished cruiser. Steady at speed, it’s only a bit put off by the washboard ridges on the SLEX. It cruises at 100kph at 2,500rpm in “seventh gear”; leave it in full auto and it’ll do a mere 2,000rpm. This allows for highway economy approaching 20km/L; in the hands of a frugal driver, over 25km/L is achievable at lower speeds. And while that clever CVT can’t stop you from burning gas as you sit in traffic, we got 8-10km/L around town—a comparable figure to other 1.5s on the same route. Traffic lets you enjoy the car’s other attributes, such as the enormous rear seat and the cool touchscreen infotainment system. It’s very responsive, with great sound. Smartphone mirroring is available with the HDMI port, but only the latest iPhones are currently

compatible, and video is only available at a stop. The three-mode reverse camera seems gimmicky at first, but “overhead” mode is fantastic for parking up against a wall or in a tight roadside spot between two cars.

In order for this review not to sound like a breathless infomercial, I suppose I’ll have to cite some shortcomings. To wit: door closes aren’t quite as solid as the best in class, and the horn is annoyingly loud inside the cabin. The slim A/C vents need to be set high to cool down that big backseat. , the 485L trunk pushes the headliner up past the rear headrests, limiting rear visibility. The trunk’s smuggler-friendly 51L underfloor compartment means the particle-board flooring tends to sag under heavy loads. But these are minor quibbles. Just like the GD City, the new car once again blurs the line between subcompact and compact, offering better space, performance toys than any other similarly priced sedan. And this time, it doesn’t look like a cockroach.

Not as handy as in the Vios, but better-finished. Paddle shifters are wonderfully responsive.

The integrated OEM touchscreen, with USB and HDMI, is fantastic. Sound quality is top-notch.

Swipe touchscreen is cool, but cool air has a hard time reaching the back at lower fan settings.

There’s a small parcel shelf in the rear, but no rear cupholders. The trunk is absolutely enormous.

Soft-touch panels and fabrics give feel. But the touchscreen attracts smudges and lint.

Note: This story first appeared in Top Gear PH’s July 2014 issue. Minor edits have been made. 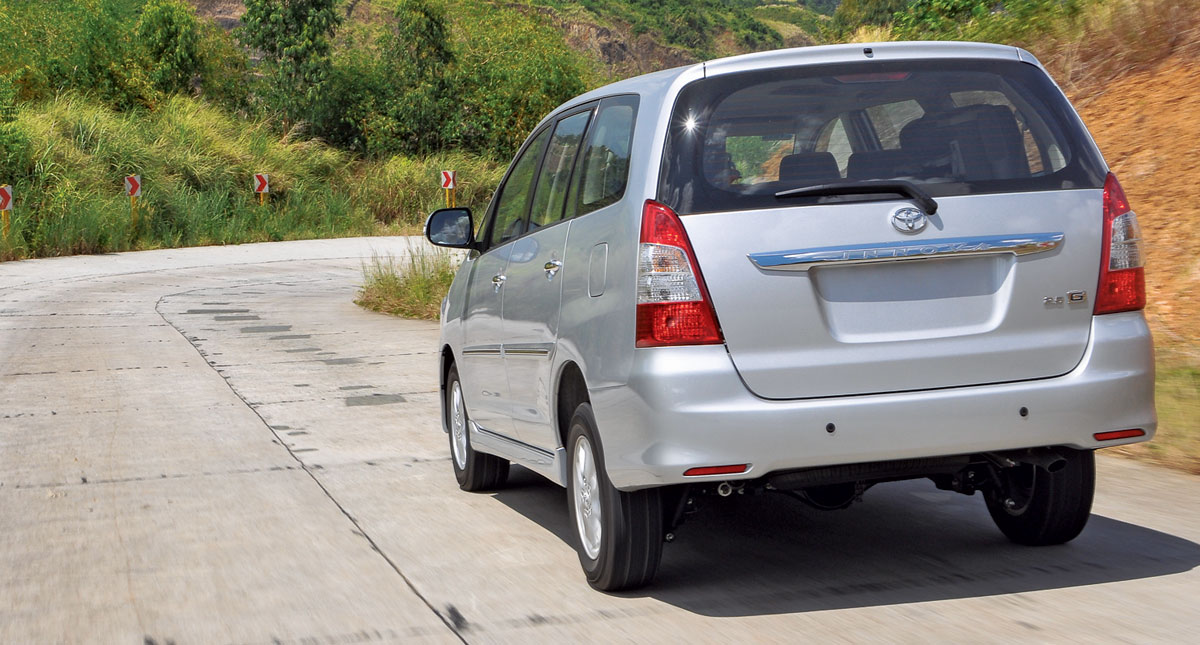 Used Car Review: The Toyota Innova might be what you are looking for
View other articles about:
Read the Story →
This article originally appeared on Topgear.com. Minor edits have been made by the TopGear.com.ph editors.
Share:
Retake this Poll
Quiz Results
Share:
Take this Quiz Again
TGP Rating:
/20