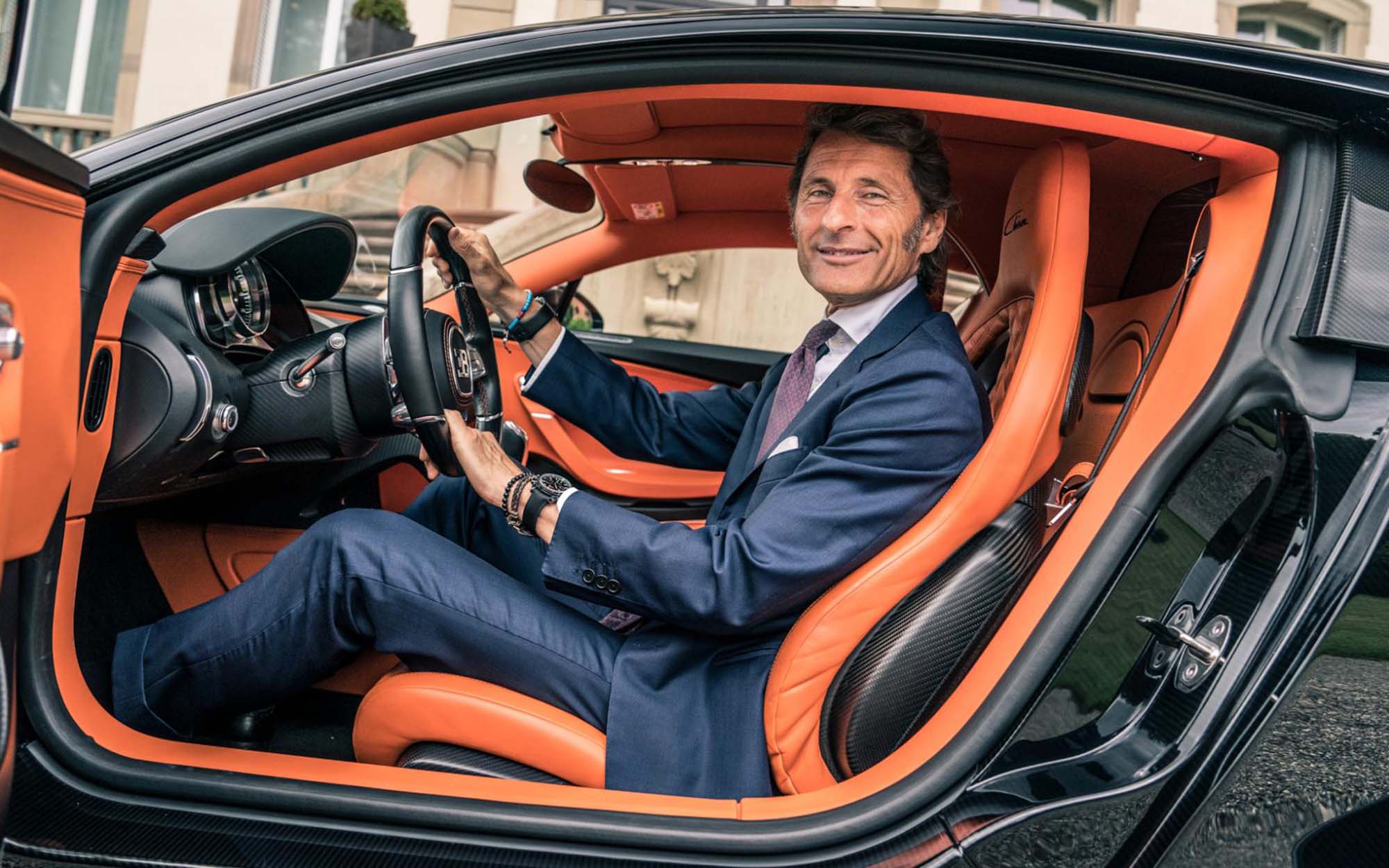 'Top speed is not paramount to the success of Bugatti. Someone will always be chasing you.

As offices go, Chateau Saint-Jean, in Molsheim, the birthplace of Bugatti, is hard to rival. The stunning building is flanked by two coach houses: Remise Nord is home to the historical collection and Bugatti’s team of “flying doctors”; Remise Sud contains the Bugatti library upstairs while downstairs there’s a large video wall on which prospective owners pore over and finalize every detail of their Chiron.

Opposite Remise Sud stands the Orangery (lovingly restored in 2009 in honour of Ettore) and beyond that to the south lies the modern Atelier building in which Chirons number 109–118 are currently being handcrafted in an atmosphere of calm.

The Atelier itself is built in the shape of the iconic Bugatti macaron logo and houses three chassis assembly bays and one recently updated rolling road. It had to be rebuilt after the first full-power test of the Chiron blew the electrics on its predecessor and turned the lights out in this part of Alsace. The whole facility has a feeling of exclusivity and calm, but wears it lightly, nestled as it is between the Bowling du Trèfle bowling alley and the Dorlisheim McDonald’s—the majority of passers-by would be oblivious to the magic being created inside.

With more than 300 of the 500 Chirons now sold and two potential owners spending time in Remise Sud specifying theirs during our visit, the brand is clearly in rude health. But following the most recent cabinet reshuffle of the Volkswagen Group (Bugatti’s parent company) and the departure of Wolfgang Dürheimer, Bugatti has a new CEO: ex-Lamborghini head honcho Stephan Winkelmann. Responsible for the Aventador, Huracán and myriad limited-edition cars, he also broadened the brand into new markets with the Urus. Top Gear was the last person to interview Winkelmann in Sant’Agata on the final day of his 11-year tenure at the company, so there’s a pleasing symmetry that we are the first to be granted an audience with him at Chateau Saint-Jean following his arrival here after a relatively brief stint as the boss of Audi Sport.

Six months in, how does he find Bugatti, and what are the differences between it and Lamborghini?

“When I joined Lamborghini in 2005, we had two models—the Murciélago and Gallardo. But we did not have the brand image of Bugatti. We had cars but were lacking the image. Here at Bugatti, we have a very strong brand, but only one product. In addition, that product is strictly limited to 500 units, which is very good for our customers but presents a challenge to an entrepreneur or a company that wants to run a solid business. My workload comes from our ideas on what we want to accomplish with the Chiron, and what we want to do with the brand in general.”

Before we get on to what’s next for the brand, what’s next for the Chiron? Given the Veyron had four derivations including the Targa-roofed Grand Sport, the Super Sport and various other tribute editions, with fewer than 200 cars left to sell, will the Chiron follow its predecessor’s example?

“There is no need for me to tell you about the Veyron, you know better than I do! This is something we’re looking into, but we will not make an open car. We will stick to the coupe. I want to keep the Chiron as pure as possible. I want to get the best out of the coupe.”

“Priorities change. And for me, top speed is not paramount to the success of Bugatti. Someone will always be chasing you. If you want to enter this game, that may be okay, but it is not my top priority. To be honest, I don’t know how much faster than 420kph we could go.”

What’s the fastest you’ve been in the Chiron, and do you get to spend enough time in them?

With no plans for a broadening of the Chiron range in the immediate future, surely there must be bigger plans for the brand which Winkelmann has been tasked with overseeing and delivering.

“When the Volkswagen Group bought this company and the brand, it was about re-establishing leadership in the automotive world with one car—the Veyron. This was a car which completed the golden triangle: perfect design, which was to be timeless, comfort, which no other supersports car manufacturer could match, and performance in excess of everything you could imagine. After 40 years of a flatline for the brand, to have a jump-start like this is incredible. And the Chiron is a further development to make the perfect car even better.

“When I joined Bugatti, it was important to me to look into the history of the brand to understand its origins. When Ettore Bugatti founded the company, here in Molsheim, he wanted to make exclusive sports cars and then he ran the business by doing very different things. He produced what we would call Formula cars, which could easily be converted into road cars. The T35 is the most iconic example. But he also made the Atlantic, he made the Royale. In terms of chassis, engines and body styles, he did everything that was possible at the time.”

So what do you see as the broader opportunities for the brand?

“Beyond the Chiron, I think there is a huge opportunity. If you look at our history and customers’ behavior and talk to customers and dealers, they are all saying: ‘So, what’s next?’”

Speculation about a second line in the Bugatti family has kept the internet busy since the rebirth of the brand. With Rolls-Royce and Lamborghini now adding SUVs to their lineup, are we on the cusp of the Bugatti SUV the internet has been talking about?

“There is nothing I can confirm. No decision has been taken yet. Bugatti could make more than one car, this is certain. We are looking very carefully at body styles, at segments, regions, pricing and our customer base. Our customer base, although it is perfect, is very limited. We have 400+ customers, but these are not the only people we could possibly reach. If we decided to build another model, it would not be an alternative to the Chiron. The idea would be for our customers to think, ‘I am going to buy the Chiron AND the …’, not ‘the Chiron OR the …’”

So while a potential second car in the Bugatti lineup is still in the evaluation phase, clearly it would have to have some distance from the Chiron to fit into the “and” category that this unique group of customers is fortunate enough to consider. If we were to guess, we’d argue an SUV would be too obvious, too vulgar for a brand fiercely protective of its position at the top of the automotive exclusivity foodchain. Any second model would need to either set a new benchmark in its target segment (as the Veyron did in the hypercar space) or, better still, create a new segment of its own, which delivers on the “golden triangle” of unique design, class-defining comfort and unrivaled continent-crushing performance to fit the “and” criterion, while also avoiding dragging Bugatti into the murky world of rival vehicles… something it has successfully swerved to date. Time will tell.

In the meantime, our guess is that, by taking the Lamborghini model and applying it to Bugatti, there will be a limited series of a more extreme version of the Chiron in the near future. Something Winkelmann is exploring.

“I told the team that if we were to do such a project, it would have to be something special, something unique, something limited. Something to excite people and the world. It would need to be different… but would also have to be immediately recognizable as a Bugatti. It would have to feature three things: the horseshoe grille, the Bugatti line, and the center line from the Atlantic.”

Given the complexities of the car’s engineering, the powertrain would need to remain untouched, but the bodywork, aerodynamics, steering and interior could be altered to make a lighter, nimbler, more aggressive limited-series car with increased downforce. At the time of writing, we imagine the Bugatti historians are scouring the archive to find a suitable candidate to name such a project after… might we humbly nominate Albert Divo, twice winner of the Targa Florio in a Type 35 and founder of the Club International des Anciens Pilotes de Grand Prix F1, and something of an uncelebrated legend?

Quite how you decide on a price for such a car, or how many to make, is beyond TG math and hugely dependent on the scale of the transformation. But, using our lowly calculator skills, we reckon if Bugatti made a 40-car limited series based on the Chiron, allowing 10% of the current Bugatti customer base to have one at €5m (P300,000,000) a piece, it’d represent a unique opportunity for owners and a profitable marketing tool that would deliver a nicely timed dollop of positive noise around the brand, as the bigger issues of future projects are fought out in the boardrooms of Wolfsburg. Given that the US is Bugatti’s largest single market, and that the kind of people able to consider adding a one-of-40 edition to their fleet of Bugattis descend on Monterey Car Week in late August, it’d be reasonable to speculate that it might be an appropriate place for such a car to be revealed. Perfectly timed to be a year since the announcement of Dürheimer’s departure and his replacement by Winkelmann. But all of this is pure speculation, obviously.

Over the course of the next few hours, as we wander around the grounds of the most stunning car production plant in the world, our conversation wanders to autonomy: “For me, a Bugatti is a car to be driven, also in the next decade. Our plan is not to be autonomous.” To racing: “I would love to, but I see no way of doing it. The Chiron is not a racing car. I would love to; if someone has an idea they should come to me!” To how you justify a 8.0-liter, quad-turbo W16 engine as part of the VW Group: “We can justify it with the numbers and the mileage. This engine has been a unique attribute, the iconic heart of a modern Bugatti that makes it so special to our customers. It is really a piece of art. The Chiron has an average mileage of less than 3,200km a year, which is negligible” to hybridization: “We are creating something which is perhaps the last of a kind. I hope not, but it might be. Internal combustion engines are still very close to my heart. So we have to see the trends, we have to see what is available. For me it’s clear that there must be some level of electrification. But this depends very much on the timing, and on the size and the weight. One thing is clear, though: Whatever we do, it has to be the best of the best.”

It’s clear, having spent time with Winkelmann in his new domain, that he isn’t there to merely oversee the production and delivery of 500 Chirons. Both he and the Group have ambitious plans for the brand, which over the past 20 years has redefined luxury and performance. Given Winkelmann’s track record at Lamborghini, it will be fascinating to see what the next chapter holds for this quiet little corner of Alsace. 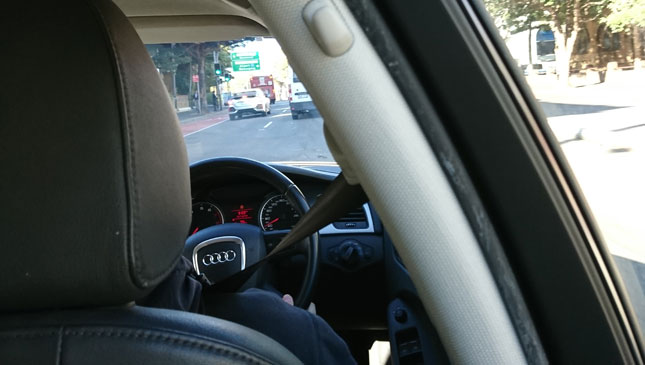 When a luxury car isn't immune to the law
View other articles about:
Read the Story →
This article originally appeared on Topgear.com. Minor edits have been made by the TopGear.com.ph editors.
Share:
Retake this Poll
Quiz Results
Share:
Take this Quiz Again
TGP Rating:
/20