The new 720S is a big leap forward for McLaren 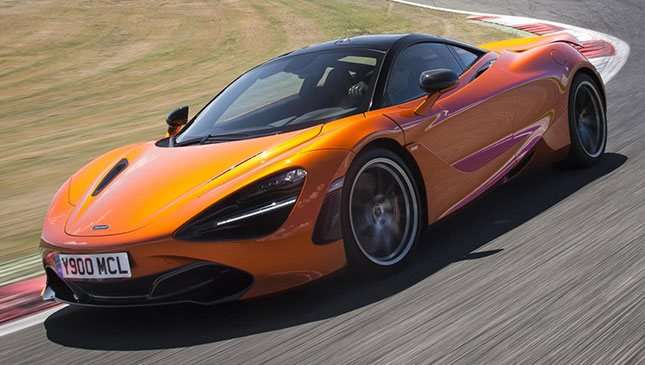 Few car companies are mapping out the same intergalactic trajectory as McLaren. From a standing start less than a decade ago, Woking’s finest have ridden out some early speed bumps and gone on to blow our collective minds. They’re on course to sell 4,000 cars this year, it’s a less uptight place than it used to be, and the 720S signals another major milestone: This is the first time McLaren has completely replaced one of its core cars. 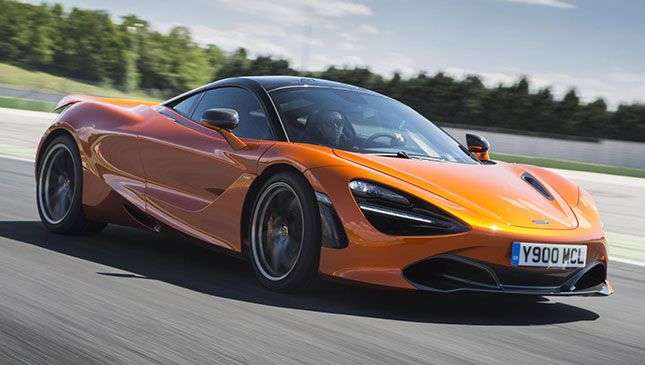 In some ways, yes. McLaren Automotive has the sort of restless, questing spirit you’d associate with a tech start-up, and the 720S demonstrates the company’s preparedness to veer off at some unusual tangents, as well as addressing the areas that misfired first time round. McLaren says 91% of the 720S is new, and the enlarged 4.0-liter engine features 41% new content: turbos, intercoolers, cast-aluminum plenum, cylinder heads, crankshaft, pistons, and exhaust.

Topline numbers include 710hp, 568Nm, 0-100kph in 2.9 seconds, 0-200kph in 7.8, and 0-300kph in 21.8. There’s also some seriously funky new software to go with the hard bits, and a handful of theatrical flourishes. The doors are double-skinned dihedral jobs, and the engine isn’t just visible through the rear screen, it’s also illuminated. 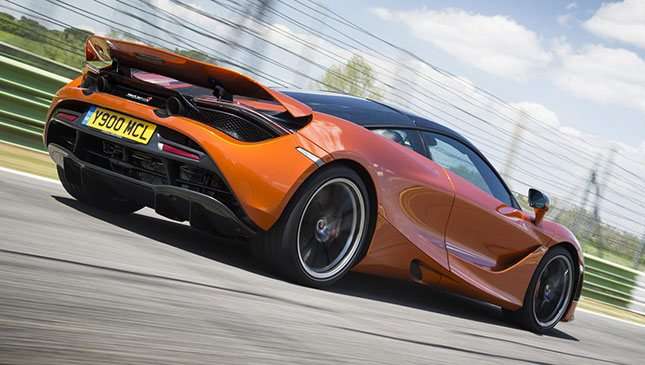 Lots of sleepless nights, then.

Development work started back in 2013, before the 650S had even been announced, and a big chunk of it was done virtually. The first full validation car was only built and driven 11 months ago, so its path to market has been extremely rapid. The aero work is off the scale, and the 720S generates 50% more downforce than the 650S managed at full tilt. It has double the overall aerodynamic efficiency, and is 15% more efficient in its cooling.

It’s also worth remembering that the 720S is pretty much P1-fast in certain increments, and has similar braking capability. Crazy stuff. But it’s also designed to be useable every day.

Sounds too good to be true. Is it?

Well, it’s certainly good. In fact, we’d go so far as to say this is probably the single most accomplished supercar we’ve ever driven, which is not the sort of statement we make lightly. Remember, though, that McLaren was burned back in the day by a perceived lack of soul in its early cars, and we all know that it’s the indefinable bits that usually elevate a supercar. First impressions here are great: steering feel is impossible to measure objectively, but the 720S has that road/car/driver telepathic thing absolutely nailed. 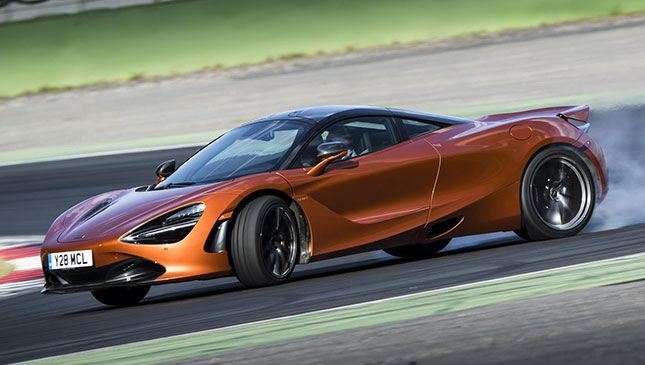 Remind me what’s under the skin?

Lots of carbon fiber. Dubbed 'Monocage II,' the chassis structure now incorporates an upper structure and windscreen surround, so it’s even more rigid than the 650. Lighter, too: its lightest dry weight is 1,283kg, 18kg less than the equivalent 650S. There’s an enhanced center of gravity, thanks to the engine being mounted 150mm lower than before. A 'visible monocage' that exposes the material on the inside of the A-pillar is a £3,990 (P257,000) option. The cowl is also lower: closer to serving up the jet fighter sensation than anything else on the road, and its vision all around is peerless. 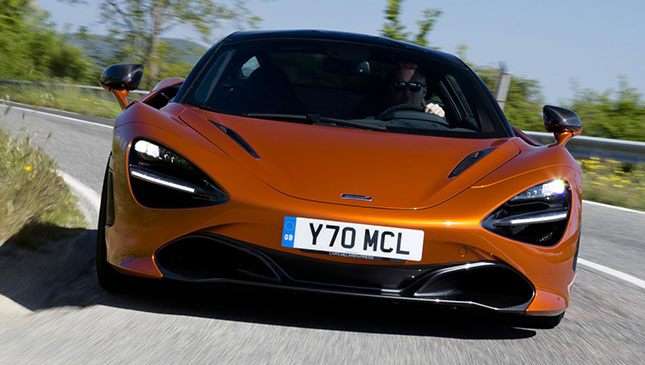 The 720S is easy to drive. Really easy. Common sense demands acclimatization, but you get settled incredibly quickly. Tire noise and mechanical thrum is negligible at regular cruising speeds. Turn up the heat and the McLaren compresses time. You are here, now you are there: the bit in between is simply vaporized.

But rarely has the time-warp been performed with so little conspicuous drama. The twin turbos are ultra-low inertia, twin scroll jobs that spool up much faster to reduce lag and sharpen throttle response. The redline in first and second gear is 8,100rpm, 8,200 in the next four. Keep the throttle pinned throughout, and big numbers rack up very rapidly indeed. Shift times on the seven-speed dual-shift ’box are 45% faster than even the 675 LT delivers. You can sense the chassis electronics doing their thing, but only just. 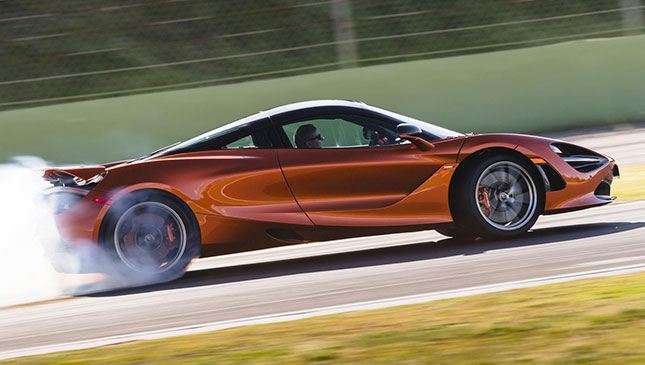 McLaren has reworked the harmonics on the new exhaust system, and the optional Sports Exhaust uses an intake sound generator to pump more volume into the cabin via twin vents mounted between the seats on the rear bulkhead. In standard form, the 720S is just five% off the 570GT in terms of noise levels, so it can do the long-haul. Overall, and purely subjectively, we’d still say a normally aspirated engine has the edge, but as turbo motors go, the 720S is a new benchmark. Especially if you do what McLaren calls a ‘hot start’, which means sticking it in track/track mode, at which point it emits an entirely pointless but highly enjoyable wail. 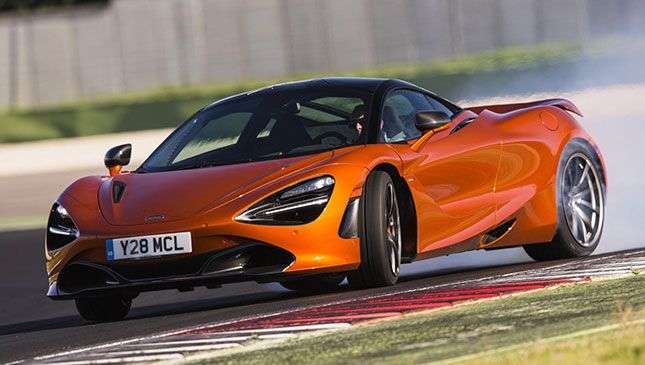 What else is new?

The 650’s multi-adjustable Proactive Chassis Control receives some intriguing revisions. As before, the dampers are interlinked at each corner, so there are no conventional anti-roll bars. There’s improved hardware, though: the uprights and double wishbones are new, reducing unsprung weight by 16kg. As before, you can choose between Comfort, Sport, or Track mode according to location or intention.

One other thing: The base Pirelli tire used by the 720S has the same performance as the old Trofeo track rubber. There is grip and compliance in equal measure, although the Ferrari 488 GTB runs it very close.

No sign of EPAS or an active rear axle?

Nope. "The hardware is still too heavy, the response times too slow," says vehicle development director Ben Gulliver. On the 720S, the rack uses one software map, and the linearity of response and the dialogue that builds between you and the road is spectacular. A small but important point: The three-spoke wheel isn’t buried under a welter of buttons, it exists to steer the car and nothing else. Proper. 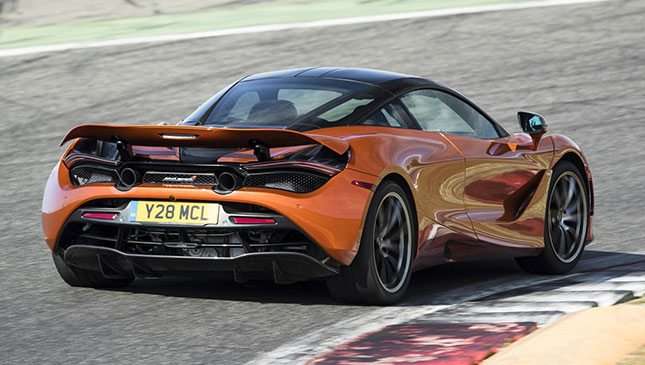 How does it feel on the track?

The Vallelunga circuit is relatively short but a lot of fun. But it’s also where we get to the heart of the matter: the 720S is so damned good it’s almost… undramatic. It’s that edgy supercar question again: do you need to be asking for planning permission on the ragged edge before decreeing something a 'real' supercar? Or do you just want to go ballistically fast, everywhere, rain or shine, with almost total impunity? The 720S isn’t clinical, but it is surgical.

The new Variable Drift Control is amusing, but you still need to be able to balance steering and throttle effectively, so why not just turn everything off? Goodwin reckons the system works like the nine-stage traction control in McLaren’s GT race cars, and the endgame is finding the best set-up for whichever track you regularly visit. In other words, traction optimization rather than control. 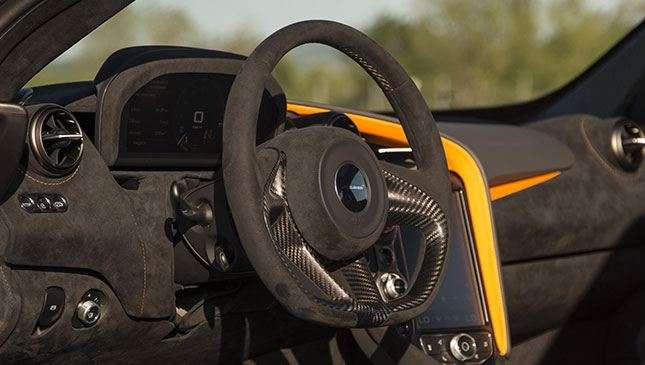 Inside, the 720S somehow combines the brutal ergonomic efficacy of a race car with the technical luxury of a contemporary GT. The drive mode controls now live in a vertical pod to the left of the wheel. The principal readouts are housed directly ahead, and the 'folding display' is very cool, the idea being that you can focus on the key readouts if you’re in maximum attack mode. The D, N and R buttons are in another pod that tapers toward the bottom. The doors eat into the roof, Ford GT40-style, and it really does feel like being at the pointy end of an arrow, only with much more control over your own destiny. 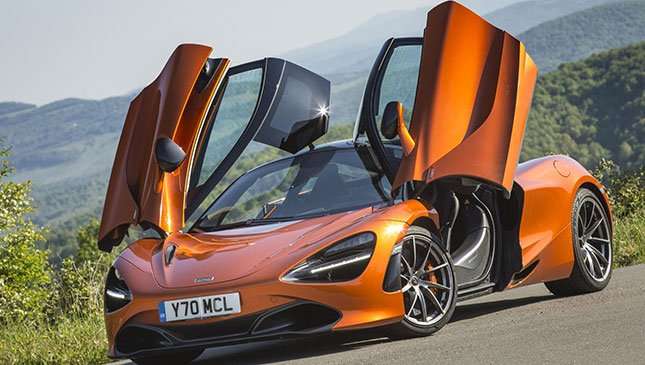 Hmm. Sounds like maybe we should order ourselves one.

It’s as intriguing as you’d hope, the 720S. All 400 launch-spec cars are long gone, and 1,400 cars have been ordered before the first 720S has even left the factory. McLaren, it seems, has hit the motherload. The 720S is magnificent, but also surprisingly nuanced for such an adrenalized proposition. It’s also worth noting that our test car lifted the £218,020 (P14 million) list price to £292,000-plus (P18.8 million), and that the full carbon look, inside and out, doesn’t come cheap. To put it another way: how does a McLaren 570GT and a Porsche 911 GT3 sound? 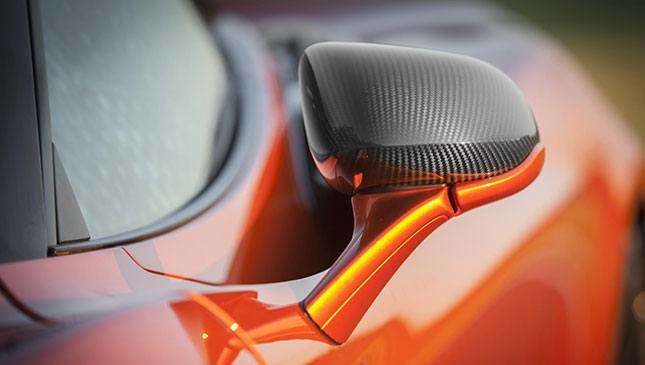 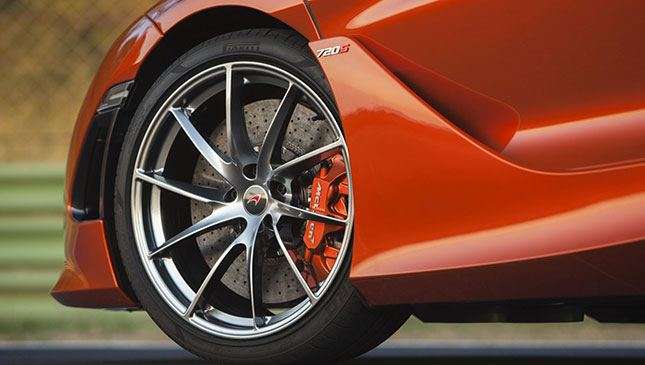 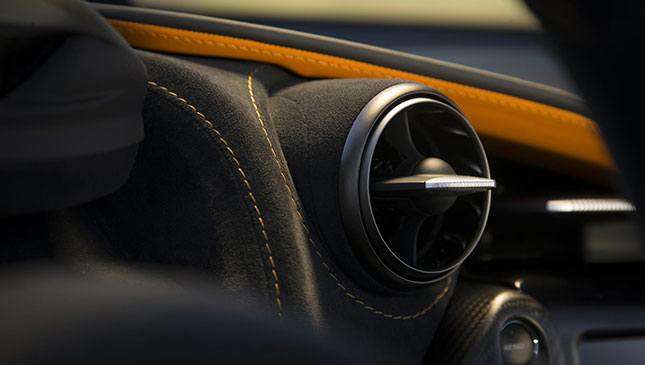 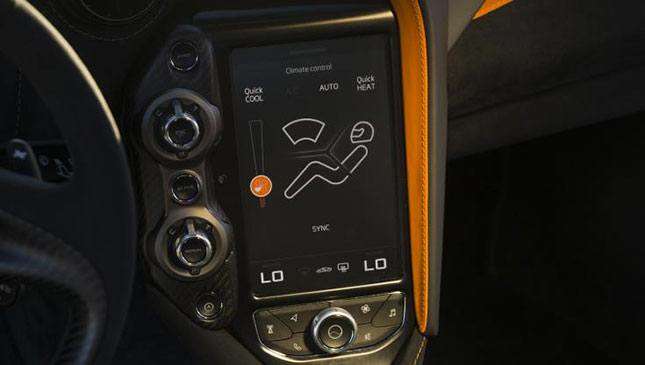 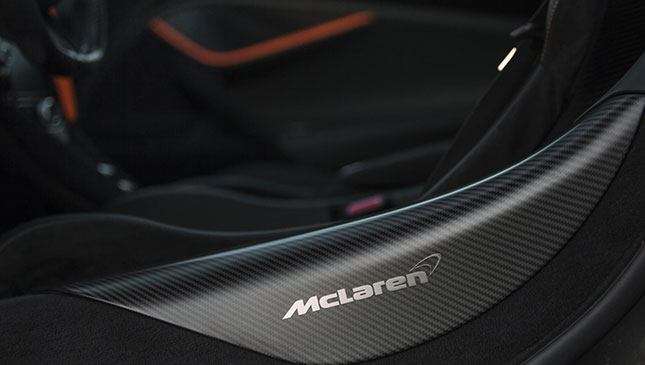 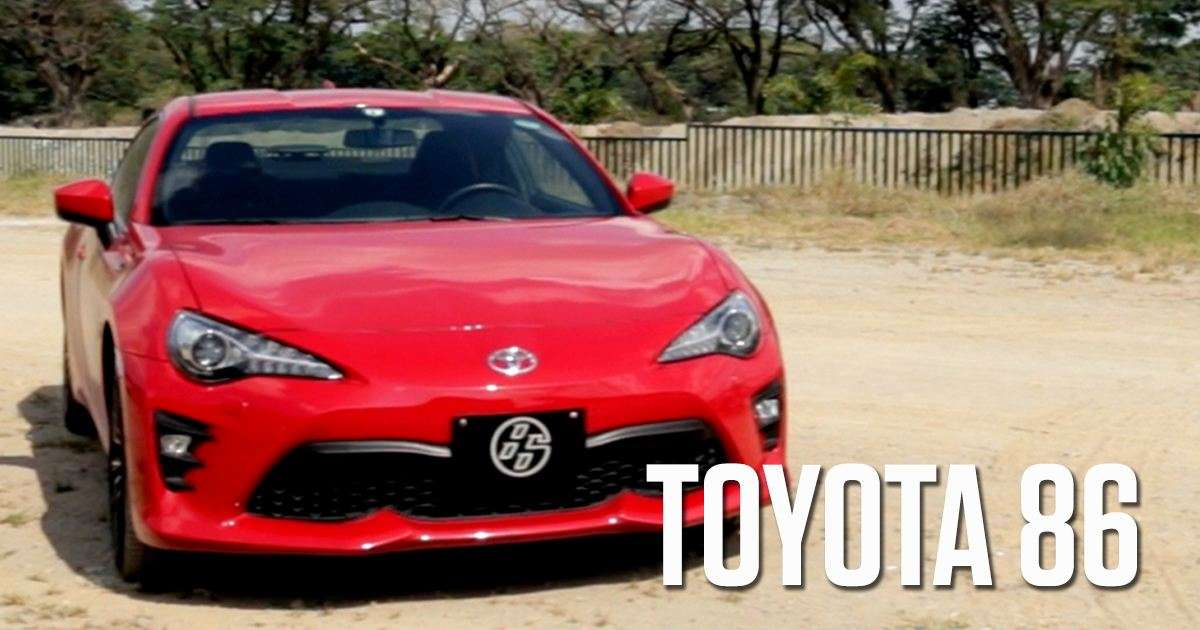 The 2017 Toyota 86 is fun personified
View other articles about:
Read the Story →
This article originally appeared on Topgear.com. Minor edits have been made by the TopGear.com.ph editors.
Share:
Retake this Poll
Quiz Results
Share:
Take this Quiz Again
TGP Rating:
/20