Remembering the 'Ghostbusters' Ectomobile on its 30th anniversary 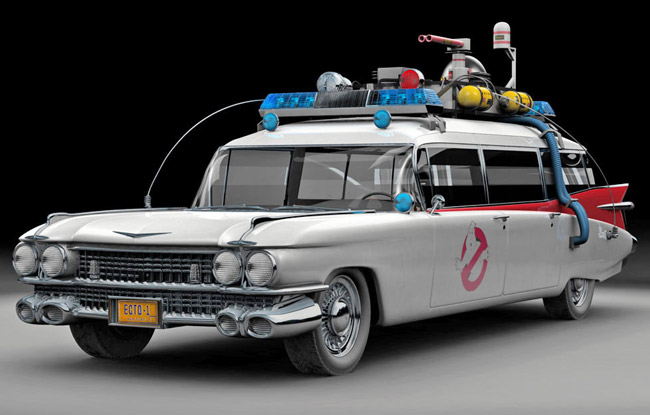 The '80s introduced many memorable automobiles, seen on both the big and small screens. There was the Ferrari Testarossa from Miami Vice, the Pontiac Trans Am of Knight Rider, the DeLorean DMC-12 of Back To The Future, and one of our favorites, the Ectomobile or Ecto-1 from the 1984 movie Ghostbusters.

In the original movie, Ghostbuster Ray Stantz says he bought the Ecto-1 for $4,800, and that it needed some elbow grease. According to Stantz, it needs "suspension work and shocks, brakes, brake pads, lining, steering box, transmission, rear end, new rings, mufflers, a little wiring." In other words, what a typical jeepney needs repaired on a regular basis.

The Ecto-1 transported the four Ghostbusters around New York, carrying their specialized equipment in its cavernous rear cargo area. In the film, a pull-out rack can be seen being used by the team for easy access to their equipment. There are extra gear on top of the Ecto-1, but the movie doesn't show what they are for.

In reality, the Ecto-1 was a 1959 Cadillac Miller-Meteor Futura Duplex, converted into a working prop car by the movie studio. The Duplex in the name indicated that the car could function as either an ambulance or a hearse.

Here’s the explanation for the Ecto-1’s long real-world name: In the past, Cadillac sold a bare chassis with a strengthened frame and a V8 engine. Coachbuilders then created different bodies for it. This is where Miller-Meteor came in. It built the ambulance/hearse body, and the finished product was what formed the basis for the Ecto-1. Not a lot of Miller-Meteor ambulances were built, and by the late ’70s van-based ambulances became the norm.

The Ecto-1 was almost 21ft long, 8ft high and almost 7ft wide. It had a V8 engine that put out more than 300hp, but its three-and-a-half-ton weight severely cramped performance.

Another Cadillac Miller-Meteor was converted for Ghostbusters II, and this came to be known as Ecto-1a, both in the movie and in real life.

Not much is known about what happened to the Ecto-1 cars after their big-screen appearances. The Ecto-1 was said to have languished in a Sony Pictures backlot for decades, before being restored just in time for the 25th anniversary of the first film. Last year, a story appeared on the website Jalopnik showing the Ecto-1a in very poor condition, left to the whim of the elements. A petition was created by Ghostbusters fans to buy the Ecto-1a from Sony Pictures, and restore it using a Kickstarter campaign. We haven't seen an update to that story yet.

The Ecto-1 will certainly live on in our collective pop-culture memories. There have been many toys released through the years, including a Lego set with minifigures of the four Ghostbusters that we desperately want to own.

This Halloween--or any day of the year for that matter--the Ecto-1 is the only ambulance/hearse that is sure to put a smile on our face.

Sweaty lessons we learned during the 2014 Volkswagen Eco Fun Run
View other articles about:
Read the Story →
This article originally appeared on Topgear.com. Minor edits have been made by the TopGear.com.ph editors.
Share:
Retake this Poll
Quiz Results
Share:
Take this Quiz Again
TGP Rating:
/20