We\'re not trying to stoke the fire of animosity between Ford Philippines and Mazda Philippines, but we find this story too funny not to share. As you know, starting January 1st of this year, the two brands have officially parted ways, with Mazda now distributed in our market by Berjaya Auto Philippines. Before that, we had heard stories about how Ford Philippines\' top management took the matter a little too personally by making life difficult for Mazda\'s new distributor--including sending hefty bills to Mazda dealers as payment for the showroom signage that Ford had constructed (as reported by business writer Victor Agustin in his Cocktales column).

If you think that move was childish, this one might be even more so (depending, of course, on whom you wish to believe).

Last weekend, we needed to verify some info about Mazda so we went to its website, which we had always known to be mazda.com.ph. Lo and behold, we were greeted by the website of some karate organization in Belize, a country in Central America. As in the Belizian karate association now seems to own the URL.

So we asked Berjaya Auto Philippines chief executive Steven Tan about it. His revelation amused us to say the least.

\"We offered to repay Ford Motor Company for all the expenses it had incurred so we could use the domain from January 1, 2013,\" Tan told TopGear.com.ph. \"Ford Philippines asked for $50,000 for the transfer of the domain rights. Berjaya felt that the sum was not reasonable, then found and registered mazda.ph instead.\"

Tan added that mazda.com.ph is still currently registered to Ford Motor Company, and that its domain ownership won\'t expire until August 14, 2014.

The implication is that Ford would rather let some karate enthusiasts halfway across the globe use the mazda.com.ph URL than cede it to Mazda\'s new distributor.

Of course, we needed to get Ford Philippines\' side of the story. So we sent them an e-mail with the following message: \"We just want to get Ford\'s side on the allegation that the company refused to give the mazda.com.ph URL to Berjaya Auto Philippines. We would appreciate if you could issue an official statement.\"

The official statement came via Ford ASEAN communications\' Anika Salceda-Wycoco: \"We worked closely with Mazda throughout the transition, and all related items were closed by January 1, 2013. Since then, Ford and Mazda have been operating as separate and competing brands in the Philippines, with independent vehicle and parts distribution and dealer network operations.\"

Okay. Now that we\'ve had a good laugh out of this, let this be the last anecdote in the Ford-Mazda saga in the Philippines. We wish both brands the best of luck as they move on from their previous alliance. 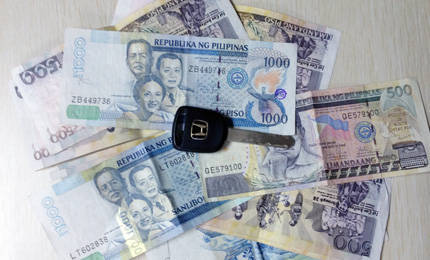 Car financing 101: Breaking it down to the last peso
View other articles about:
Read the Story →
This article originally appeared on Topgear.com. Minor edits have been made by the TopGear.com.ph editors.
Share:
Retake this Poll
Quiz Results
Share:
Take this Quiz Again
TGP Rating:
/20