Used Car Review: The Toyota Innova might be what you are looking for

It has been seven years since this generation's release
by TopGear.com.ph | Feb 18, 2019
CAR MODELS IN THIS ARTICLE

There’s not much different with the Innova of 2012 compared to that of 2011, 2010 or 2009. Why not go back to 2005, the year it was launched to replace the Revo, while we’re at it? Toyota has made such a killing with this best- selling MPV that hardly anything has to be changed, save for cosmetic upgrades to keep up with the times.

And indeed, the front fascia does give the Innova a more Camry- like appearance when viewed head-on. But take a couple of steps to the side and you’ll see that its utilitarian profile has not changed at all—the roots shared with the Fortuner SUV and the Hilux pickup are very much evident still. But that is where the strength and the longevity of the Innova lie—in its being an MPV. 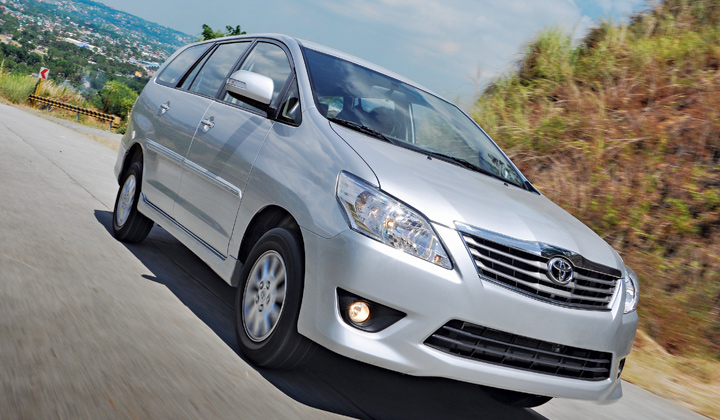 This vehicle has become a local icon of sorts not because it’s the best car out there, but simply because it’s the best car out there that does the job it has been designed to do—haul people and stuff. With a solid ladder- frame construction, it’s well-suited to carry heavy loads, whether these come with arms and legs or are packed in boxes. Like with a pickup, you just load your gear at the back and move on; like with an SUV, you get a decent, comfortable and flexible interior with reasonable space.

That said, we’ve always thought the Innova’s cargo storage could’ve been better implemented. Its fold-to-the- side-and-hook-up third row eats up so much space at the back. But despite this shortcoming, comfort is one of the Innova’s strong points, even though the car may not be the best at providing it. The cabin accommodates seven people, with A/C vents available on all three rows. The moquette-upholstered seats are cushy enough to provide additional damping for the bum, but take note that sliding off them can cause you to mildly tase yourself as static electricity passes through your fingers to the interior’s metal bits. It happened to us quite a lot for the duration of this test drive. 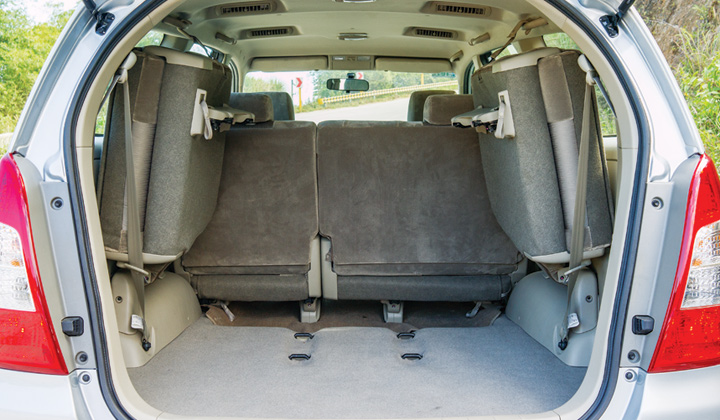 As a utility vehicle, the Innova’s tall height gives it a fighting chance over off-road ruts and the potholes on EDSA. The ride is surprisingly comfortable in spite of the inherent stiffness that comes with the chassis construction, so this MPV emerges as a more-than-adequate daily driver or family hauler. Granted, it’ll never beat a car or a real SUV in the cornering department, but it nevertheless affords civilized handling while still insulating its occupants in moderate coziness. Of course, at the end of the day, the Innova will inevitably feel more like a pickup than a car—especially whenever you have to wrestle with the heavy steering wheel.

Now, you probably think that the 2.5-liter 2KV-FTV powerplant—a common-rail, direct-injected turbo- diesel engine—is the icing on the cake. After an extended drive in the city, the Toyota MPV can only manage to do an average of about 8.1km/L of diesel based on the display. Surely, the automatic transmission, smooth-shifting as it happens to be, is limiting the engine’s efficiency as well. So, the Innova’s diesel power- train only gives it a marginal lead in fuel consumption, even if it’s a lot more fun when taking off from a dead stop or accelerating briefly at mid-range speeds. 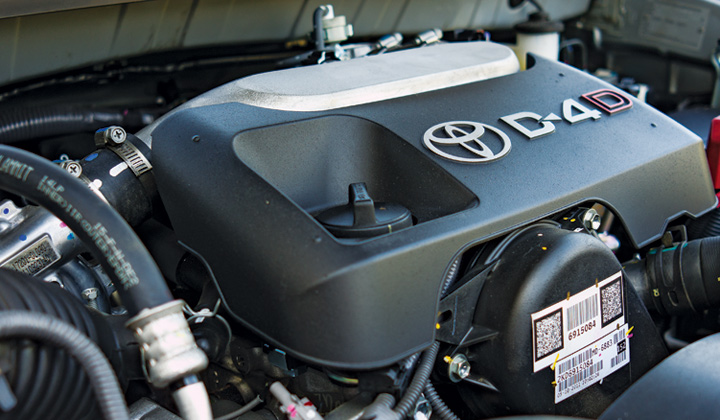 The real advantage the Innova is the number of variants to choose from. To cater to a wide range of purposes and budgets, Toyota sticks with a strategy for its flagship MPV, giving buyers a staggering total of 18 flavors to choose from, special paint jobs included. The one we have here now is the 2.5 G automatic—which, in fairness, isn’t even the model’s top-of-the-line entry. But apart from the absence of faux leather upholstery and door moldings, faux wood trim, and second-row captain seats, this is the closest you can get to the Innova 2.5 V diesel variant, which costs another P75,000 more. Beyond those, everything else is pretty much the same.

Despite getting on in years, the Innova will undoubtedly remain the market leader in its class. The nature of the product, the strength of the brand, the range of variants and prices to choose from, and the penchant of Filipinos for bringing the entire family and the kitchen sink along on long road trips, have certainly cemented the stature of this nameplate into the consciousness of the buying public. But this may not be enough to hold off the new kid on the unless the Innova learns some novel tricks. Here's what it is like inside: 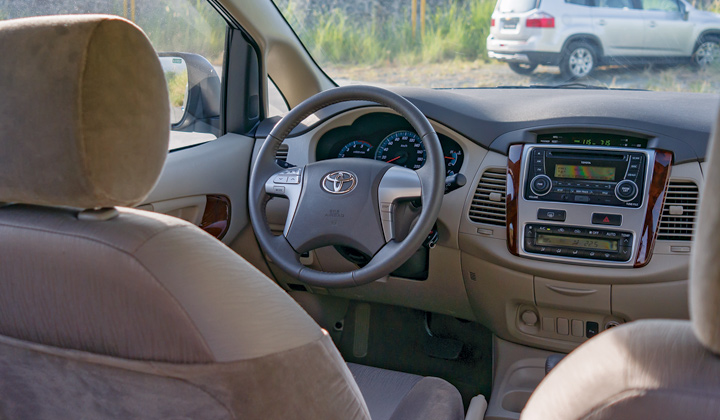 Spoke-mounted audio controls make you forget how heavy the steering feel can be.

The bright Optitron gauges give the Innova a touch of modernity.

Basic-looking interface doesn’t seem like much, but it does the job—just like the rest of the car.

Typical Toyota shifting here—unnoticeable and smooth. You will forget there’s no fifth gear.

We sure don’t miss the extensive use of faux wood in the 2.5 V variant. 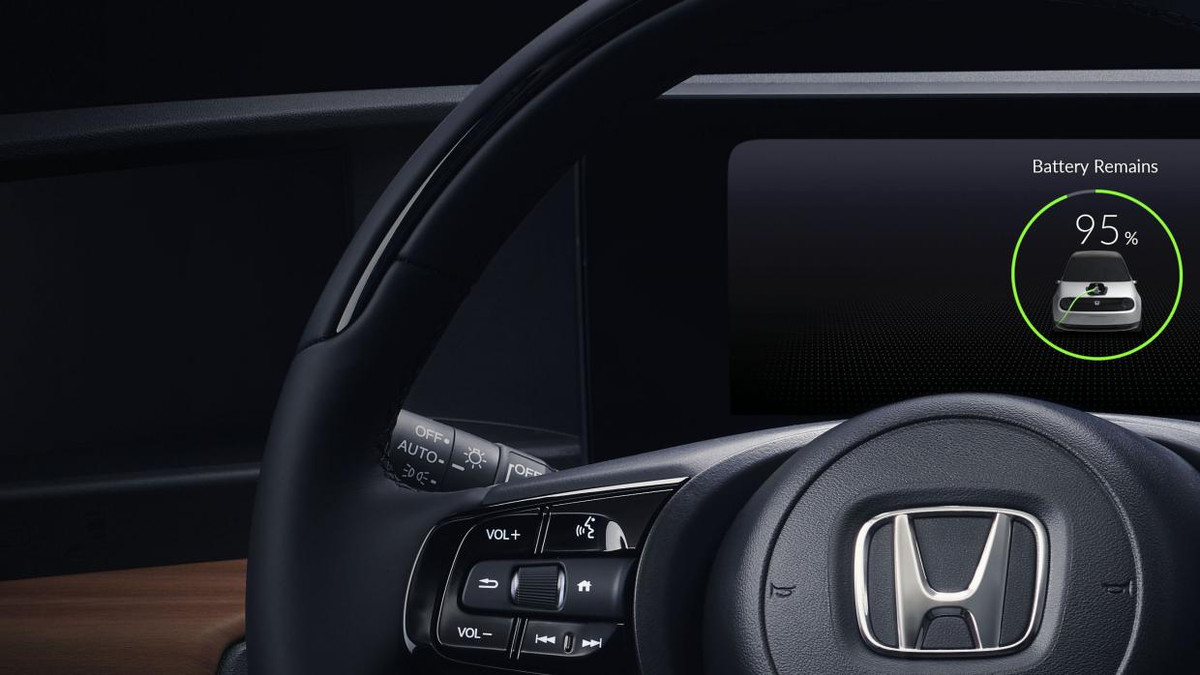 8 Details we’ve spotted in the Honda Urban EV’s interior
View other articles about:
Read the Story →
This article originally appeared on Topgear.com. Minor edits have been made by the TopGear.com.ph editors.
Share:
Retake this Poll
Quiz Results
Share:
Take this Quiz Again
TGP Rating:
/20