Each one has special memories
by Botchi Santos | Jul 6, 2016 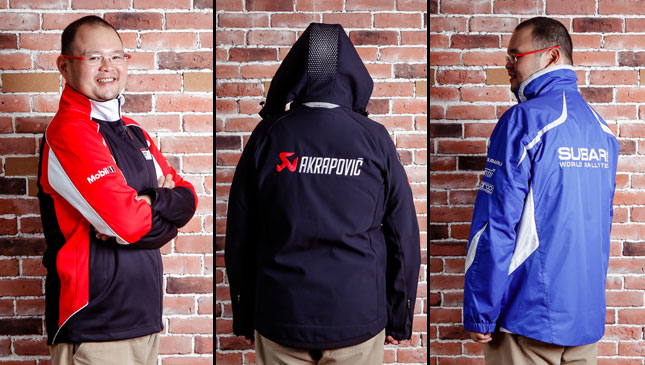 For me, I sort of ended up collecting car-themed jackets. My mother always told me to always have the right sort of jacket when traveling. Then my editor Vernon B. Sarne said to me that wearing an automotive brand on our clothing when we attend a car manufacturer's event is a sign of support. Thus, I began an oddball pile of many jackets I have amassed through the years.

Some are very expensive (if my wife found out how much some of them cost, she'd roast me alive!), a few were free, while some are just truly unique. Each jacket has a special memory or two attached to it as each piece is featured in my travel around the world.

I've given away a few jackets because they just got too big for me (yes, I'm dieting), and other pieces were asked from me by friends. But so far, this jacket collection is complete, more or less. Only one jacket failed to make it to the shoot: a Shell-Ferrari Formula 1 nylon jacket, which was in the cleaners during the day of this shoot.

You can see that there's a recurring theme here: I only usually buy motorsports-related team jackets. Right now, I love the WEC/Le Mans and the Blancpain GT Series. These favorites are followed by the Japan Super GT, the WRC and the DTM. Strangely enough, Formula 1 is least desirable for me because it hasn't excited me as much in recent years.

Here's to more jackets--and to the very special moments attached to them! 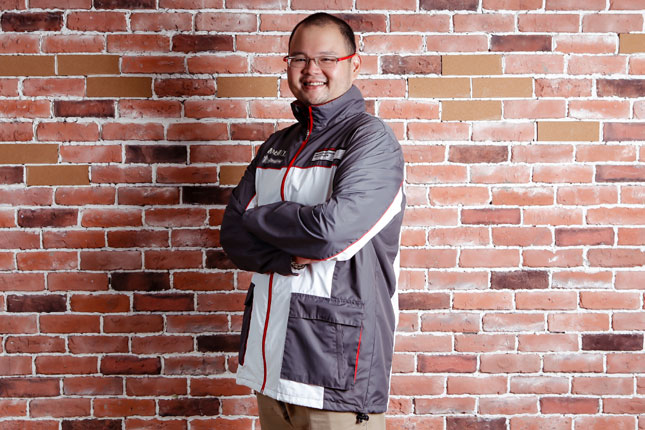 Porsche Motorsport windbreaker. I bought this on sale at a Porsche dealership in Portugal back in 2013, during the launch of the previous Boxster and Cayman. The launch was held at the Portimao Circuit. This track remains to be the scariest I have ever driven on! 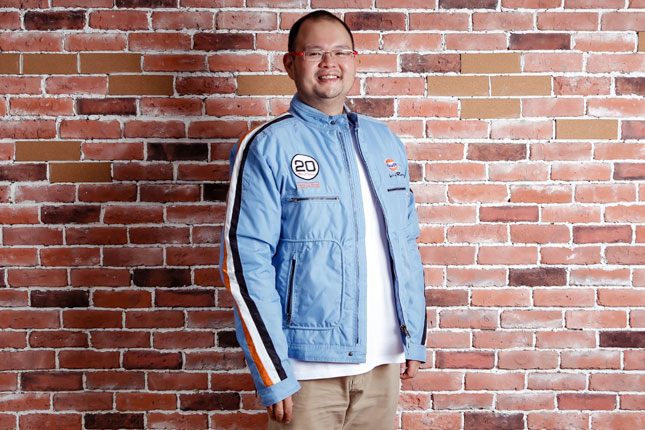 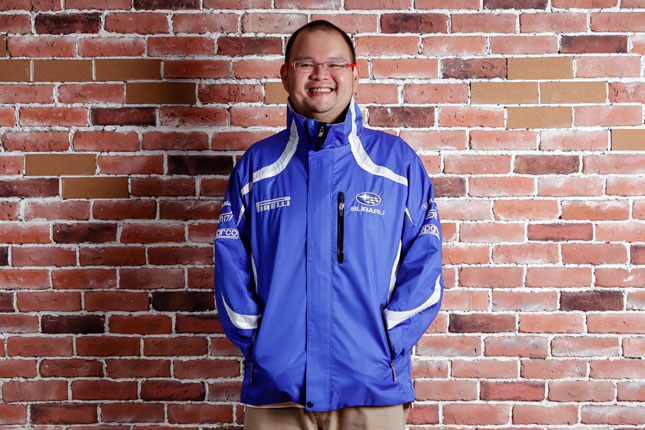 Subaru World Rally Championship team jacket. Nicky Mariano, then managing director of Motor Image Pilipinas (official distributor of Subaru in the country) saved this jacket for me because he knew I loved motorsports apparel. Subaru left WRC starting in the 2009 season. This jacket was sold to me in late 2009 to commemorate the carmaker's successful 19-year run in the series. Just perfect during the rainy season. 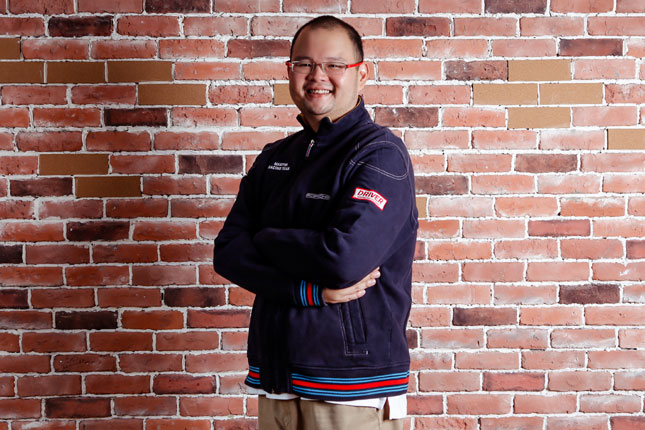 Porsche Martini Racing Driver's Selection zip-up sweat jacket. This is perhaps my most favored traveling jacket to Europe because it really keeps me warm. WRC champion and Porsche test driver Walter Rohrl wears one himself. I've had this since 2011 and been taking extremely good care of it. 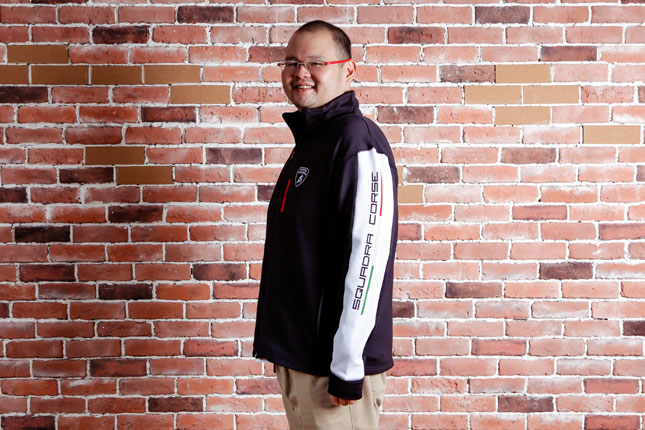 Lamborghini Squadra Corse zip-up sweat jacket. I picked this up at the 2014 Bangkok Auto Expo. It was on sale then, so it would be a crime not to buy it. Toti Zara, then Nissan Philippines president, was teasing me why I was buying non-Nissan goodies as it was NPI that had brought me to Thailand for the event. Nice stuff, but also quite delicate. 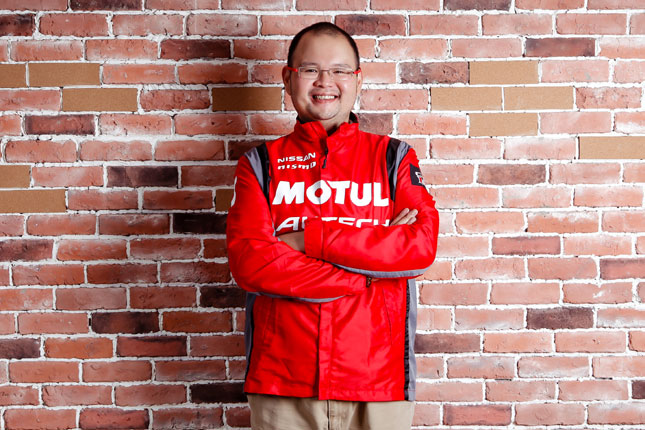 Motul Autech Nismo GT-R 2015 Super GT Driver's Championship team jacket #1. I bought this at the 2015 Nismo Festival at Nissan's global headquarters in Yokohama, Japan. It was also on sale. Toti Zara got jealous of it and told me to look for another one for him as well. I had asked Carlos Gono, distributor of Motul oils in the Philippines, many times in the past to get me a Motul-branded shirt, but he couldn't find any that would fit me. I bought this jacket and three Motul Super GT shirts altogether. Sadly, the print isn't great and keeps rubbing off after each wash. 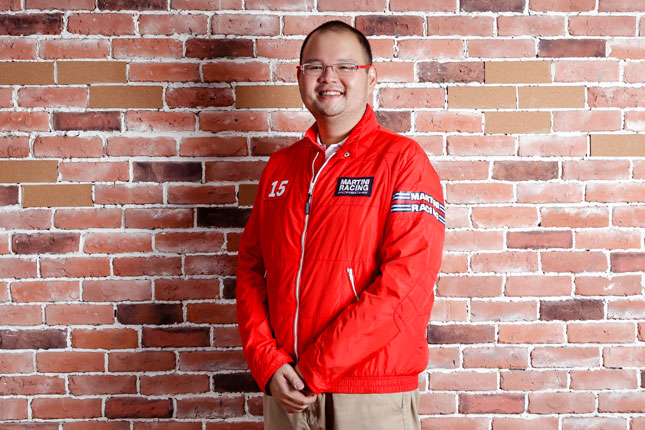 Porsche Martini Racing Driver's Selection limited-edition jacket (one of 3,000). Anything that says limited edition has my attention. And I love red. This was released in 2015. It is so delicate, though, that I almost ruined it after the first wash. The cleaners told me to dry-clean it to be safe. 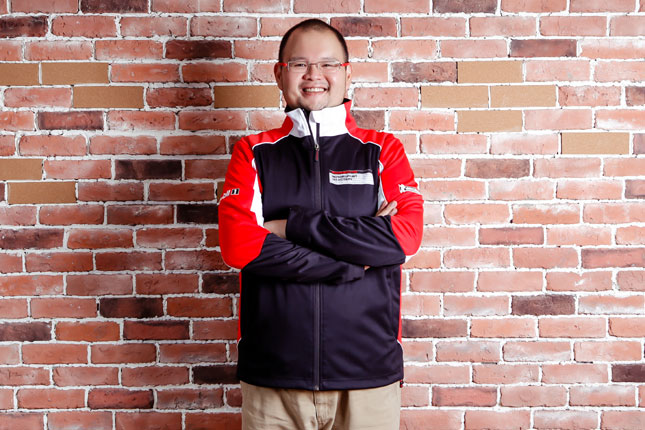 Porsche Motorsports soft-shell team jacket. I had been seeing the Porsche WEC Team and various Porsche GT teams wearing this jacket for a few years, so I wanted one for myself. As a bonus, it makes me look thin. I waited a long time, but finally got one in early 2015 by ordering it from Porsche Philippines. This is my favorite jacket right now, but it's almost too warm for our weather. 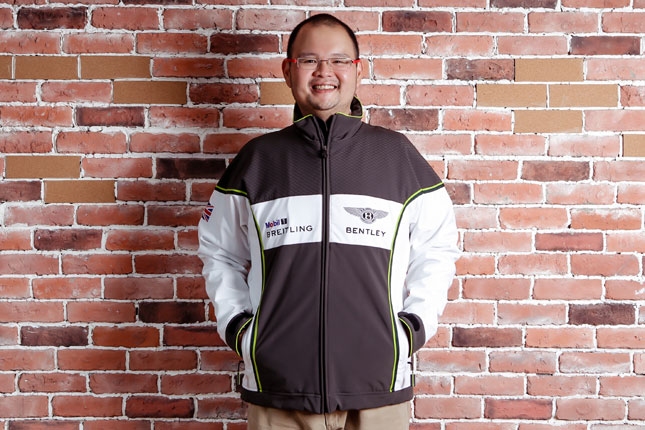 Bentley Motorsports Return to GT Racing commemorative soft-shell jacket. After many years of absence, the British carmaker finally returned to production-based GT Racing in 2013. I picked up this commemorative jacket in the 2013 Frankfurt Auto Show, at the Bentley pavilion. I later found out that it was also a limited-edition jacket. I've grown smaller through the years, so this jacket is quite big for me now. But I still love it and use it whenever I travel to colder places. 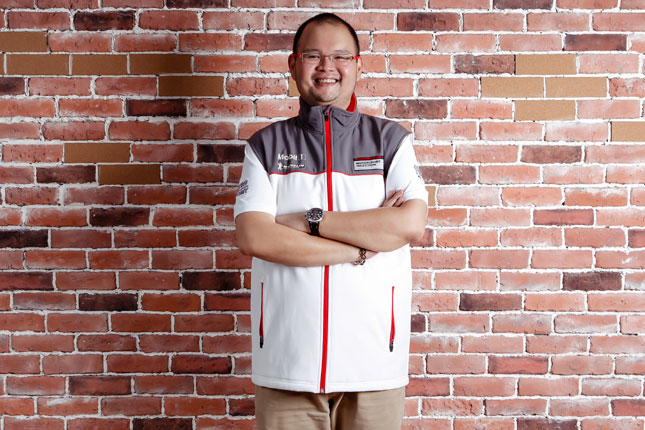 Porsche Motorsports soft-shell vest. I used to regularly play golf, and this vest was on sale at PGA Cars. They convinced me that the vest was the perfect outerwear when playing golf in the rain or whenever it was cold. I haven't played golf since I bought it in 2014. 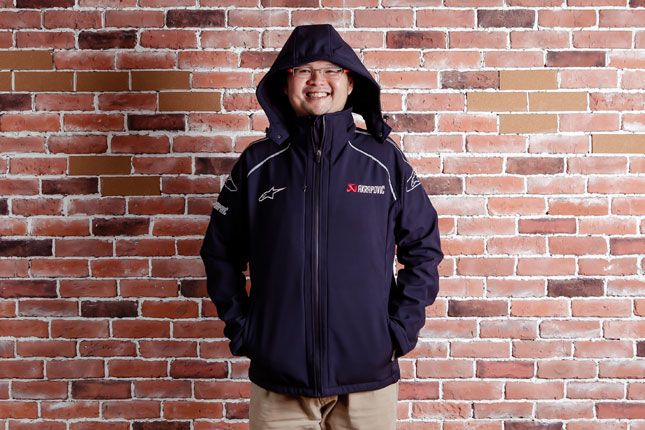 Akrapovic by Alpinestars soft-shell windbreaker. My buddy Jeff Tan of Excellar Enterprises sells many high-end baller car parts, accessories and things I can't afford. When I saw this jacket, I finally found something I could buy from his items. It's my default jacket when I travel with a manufacturer whose lifestyle products and jackets I don't have any of. 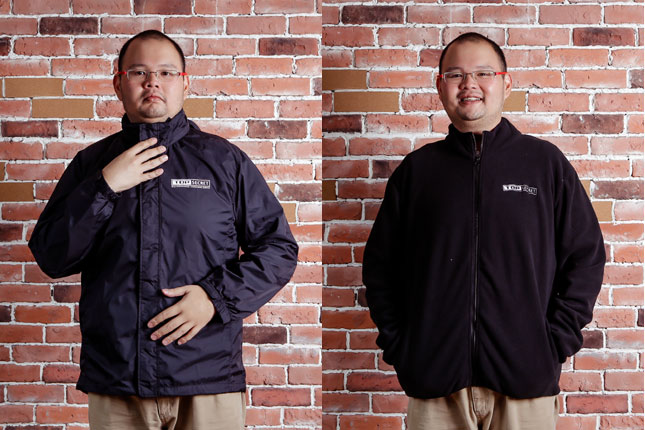 Top Secret Japan windbreaker and zip-up fleece jacket. The windbreaker and the fleece jacket are actually a set. I saw these at the 2015 Nismo Festival on sale for a song, so I quickly grabbed them without fitting them. I wasn't even sure if they would fit at all. Unfortunately, I didn't get to see Smoky Nagata at this event. The tuner in me will never die! 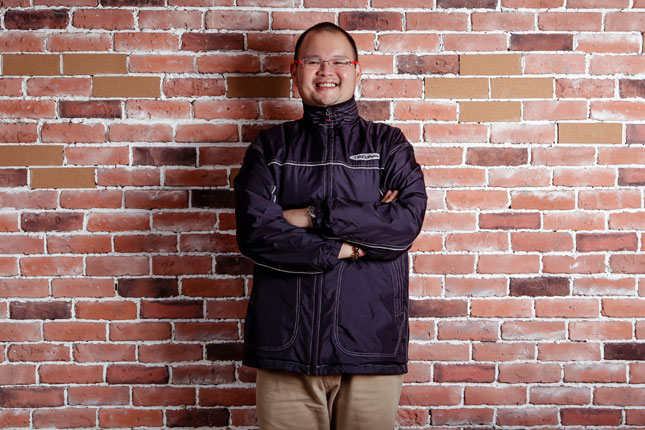 TRD Japan nylon zip-up jacket. I think this is the oldest jacket that I still use. I bought it in 2008 at the TOM'S & TRD Pro Shop in Mongkok, Hong Kong, since I had just purchased my Supra then. It was the beginning of my adventure with Toyotas. It's old, so I rarely use it in order to preserve it. This zip-up still fits me well. 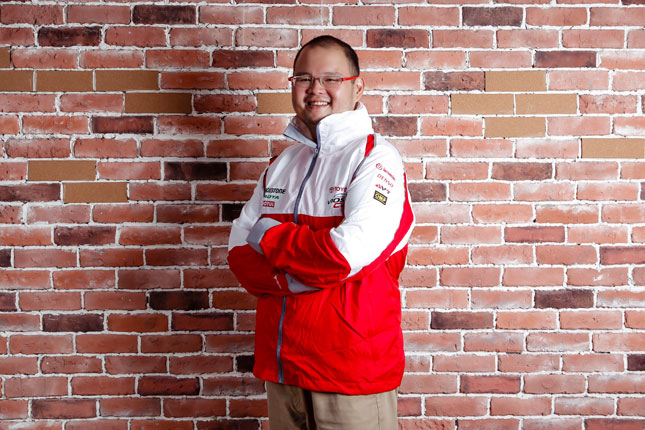 Toyota Vios Cup windbreaker. Since I raced in the first Vios Cup season in the Philippines, I had to beg, hem, haw, plead and cry until Toyota Motor Philippines gave me one. 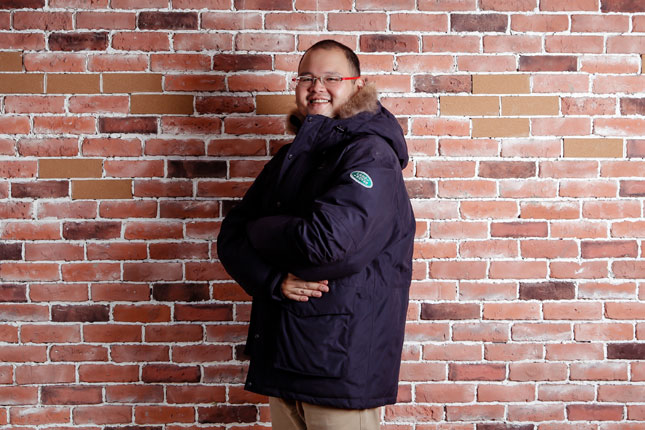 Land Rover snow parka. The heaviest, hottest and thickest jacket I have ever worn, this one is good for about -5 degrees Celsius on its own. This bulky jacket was necessary when I visited Iceland in January 2015 to drive the Land Rover Discovery Sport. This easily takes up half the space of my huge check-in luggage. 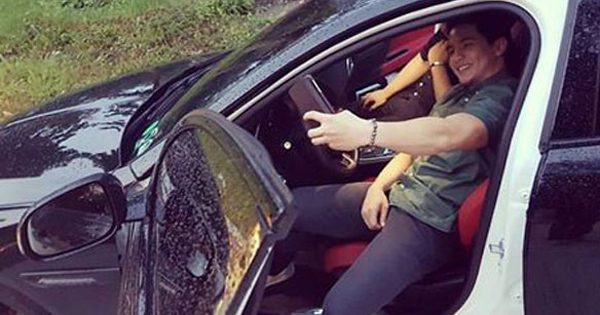 Report: Alden Richards gifts himself with a Jaguar XE
View other articles about:
Read the Story →
This article originally appeared on Topgear.com. Minor edits have been made by the TopGear.com.ph editors.
Share:
Retake this Poll
Quiz Results
Share:
Take this Quiz Again
TGP Rating:
/20