It’s officially the rainy season. During summer, car wipers are taken for granted and we rarely check the condition of the rubber blades. At least not until a sudden downpour occurs and the streaking or skipping sound on your windshield suddenly irritates you, just because the heat of summer deformed the wiper blades. Even worse, you could be driving at night—on isolated, dimly lit roads—with zero visibility because the wipers can’t expel water off the glass.

To ensure this never happens to you, it’s recommended to replace the wiper blades every year. Before the monsoon comes is the best time to change them. One of the simplest joys in motoring is having a flawlessly working, quiet wiper. Do these and your windshield will seem invisible: 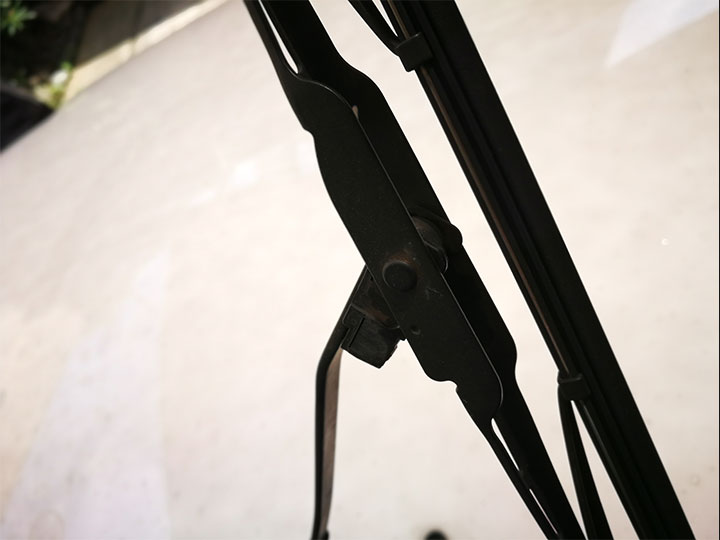 Older design framed wipers can be upgraded to beam types, which provide equal pressure throughout the length of the blade. Notice that the driver and passenger sides will not always be the same length. Identify the type of connector the wiper assembly uses. There is the common J-hook type and the less common pin arm connector. On modern cars, the bayonet or push-button style predominates. Drive to your favorite auto supply store and bring the old wipers for direct comparison.

2) Disconnect the blades from the wiper arms. 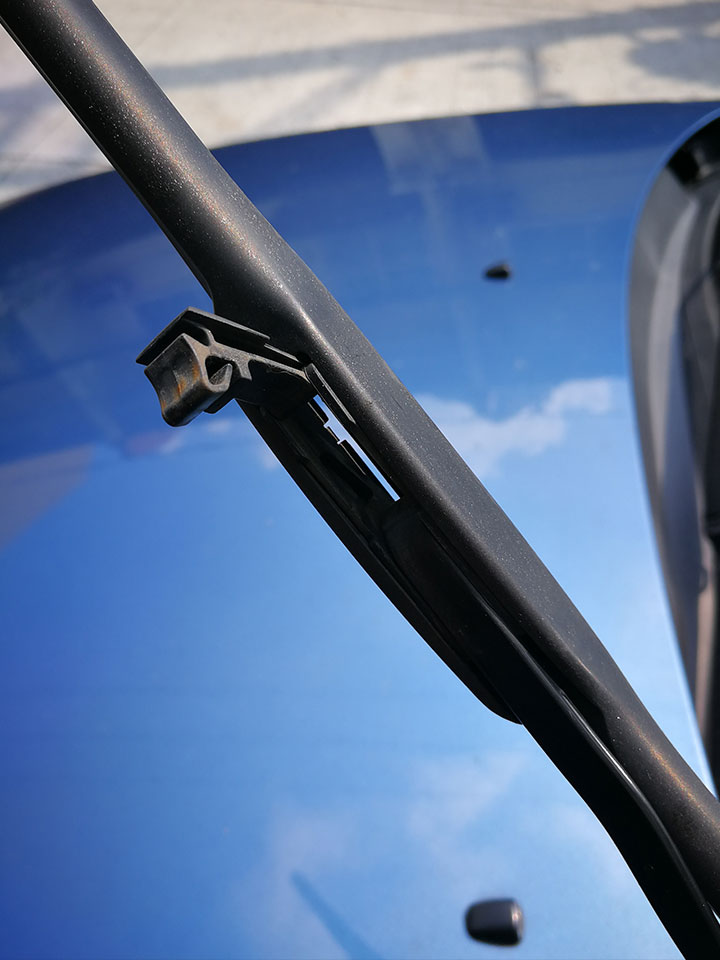 Take plenty of pictures of how they are attached, because it’s easy to get them mixed up when reinstalling the new ones. Lift the wiper arms off the windshield, and as a precaution, leave a thick towel under it when you lay it down on the windshield. The arm is spring loaded to apply pressure while in operation and the springs can generate enough impact to break the glass!

For the hook-slot style, you need to rotate the blade 90 degrees then unlatch the plastic connector. For pin arm connectors, you have to pry it loose from the pin or pull out a locking tab over the pin. Simplest are the bayonet types, it’s only a matter of pulling it straight out off the wiper arm after pushing a lock button.

3) Buy the exact length with the correct connector. 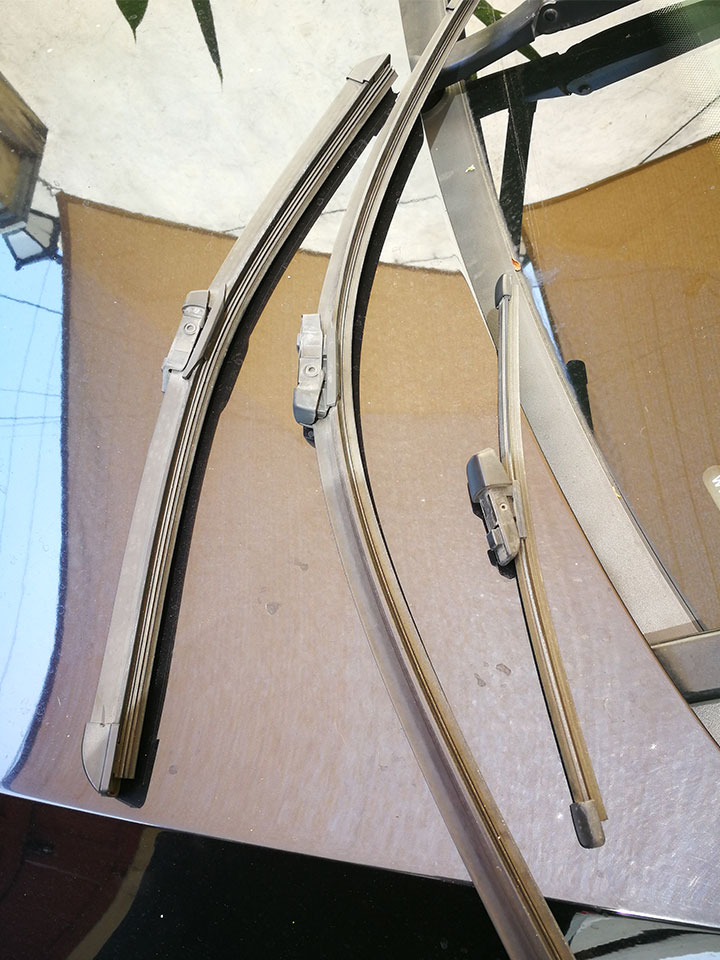 There could be dozens of choices and the beam-style wipers are generally more expensive. I prefer the blade material to be made of silicone and it’s even better if they’re lubricated with graphite. They last a lot longer and because they’re extra slippery, every wipe sounds reassuringly slick. Premium brands will have additional adaptors to fit multiple connector types and proprietary securing clips. They even thoughtfully include windshield-prepping towelettes.

4) Snap the new blades in place. 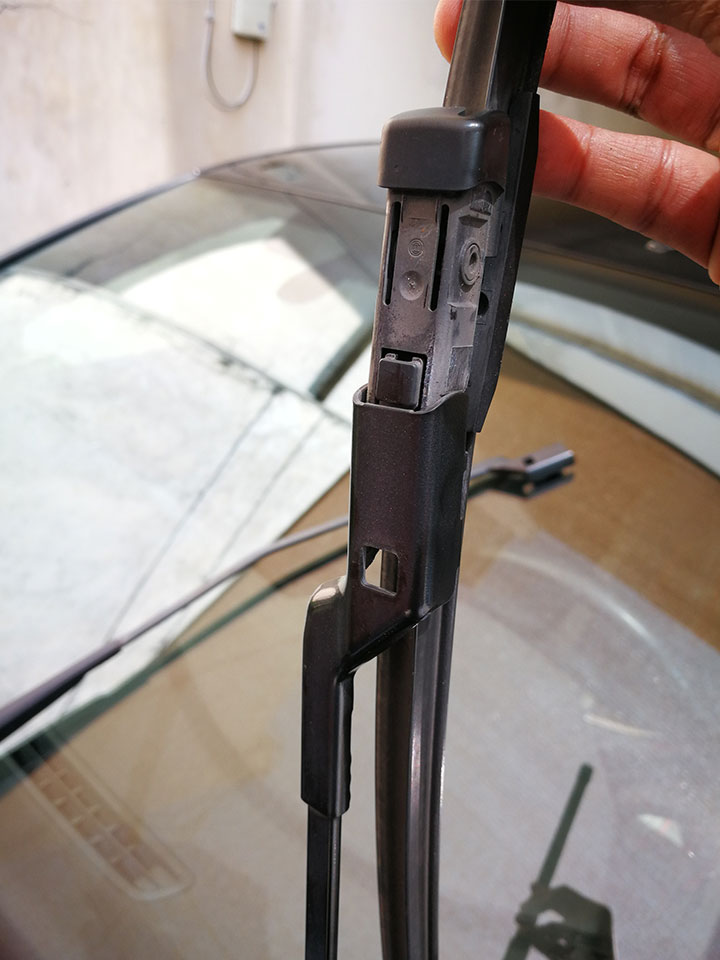 Checking your photos for correct orientation, install the new ones and make sure it’s the correct length for each side. Make sure they are fastened tight, and that the connectors lock with a firm click. Before lowering the wiper arm on the windshield, clean the glass thoroughly.

5) Replace the back window wipers, too.

Large SUVs and hatchbacks will have a smaller wiper for the back glass. Depending on its length, a direct replacement may not be readily available. Wiper blade refills can be your other option.

Replacing wiper blade refills will be a more involved process but saves you money. Once the wiper blade assembly is detached from the wiper arm, here’s another step-by-step guide you can follow:

1) Find the end where a couple of metal strips lock the refill in position.

With a pair of needle nose pliers, pinch the two locking strips together and pull them off their perches. For beam-type blades, the process is slightly different. It will have locking caps on both ends which will come off after pressing or lifting tabs. Instead of the twin metal strips, it will have a set of thicker metal bands called flexors which are preformed to the shape of the windshield. You need to slide off the plastic spoilers on either side of the connector which are pinching the two flexors together. Those are the main structural parts of the beam which also act as airfoils, to keep the wipers pressed on the windshield at speed.

With the tension on the wiper refills relieved, they will come apart. Without the strips of metal, the rubber refills will be floppy and easy to remove from the wiper suspension. For the beam type, the connector is an integral part of the plastic spoiler or the beam which slide like clamps over the flexors.

Slide the locking strips in the refill’s groove and on the wiper suspension. On the beam type blades, it can be tricky to align the grooves of the refill to the flexors. Starting on one end, sandwich the refill with the flexors and slowly insert the plastic spoiler over to hold the flexors in place. Assembly may be slow because the length of the flexors, plus they are bent for tension, so be patient.

4) Trim away the excess refill length.

Use side cutters or a sharp knife. Secure the metal strips to the frame by pressing them together and pushing them into their locking perches. Placing the end caps on the beam will lock the flexors in place.

5) Reconnect to the wiper arm.

You can do this by simply hooking it or snapping it in place. 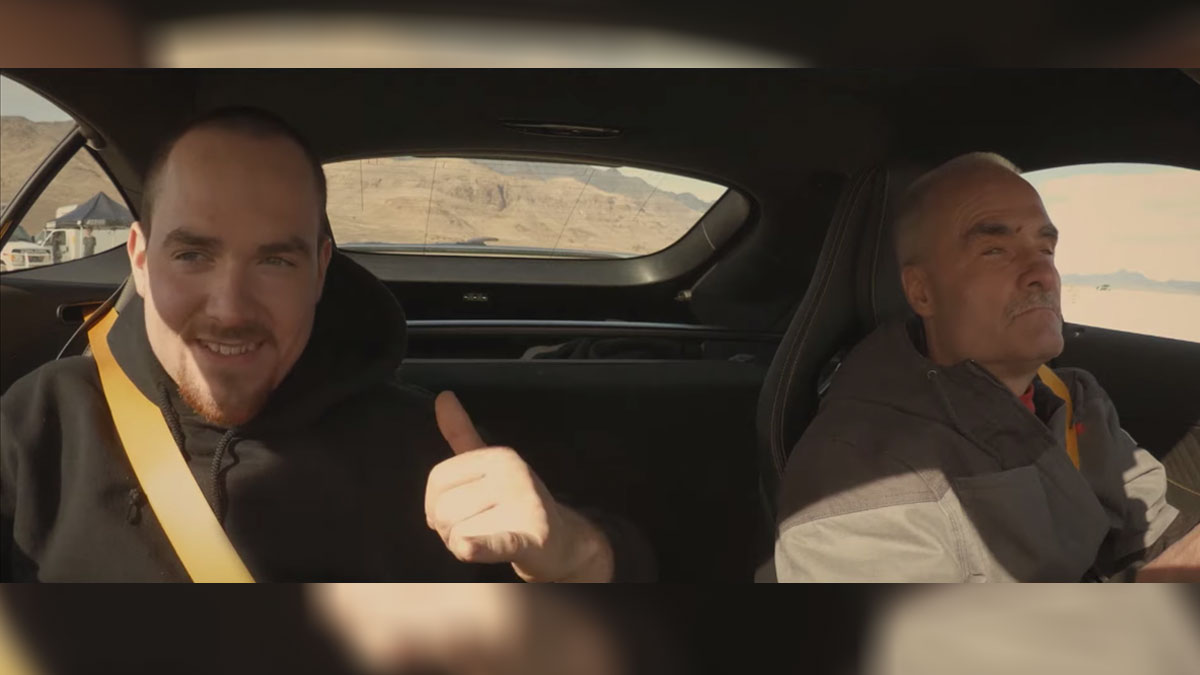 Best of YouTube: Mercedes-Benz grants blind mechanic’s wish to get behind the wheel
View other articles about:
Read the Story →
This article originally appeared on Topgear.com. Minor edits have been made by the TopGear.com.ph editors.
Share:
Retake this Poll
Quiz Results
Share:
Take this Quiz Again
TGP Rating:
/20