This road beast is a jack of all trades and a master of most
by Carlo Chungunco | Dec 23, 2019

The BMW GS is simply an icon of two-wheel motoring. Ewan McGregor and Charley Boorman in Long Way Round did more for the GS’s cachet than decades of BMW marketing. The series cemented the model’s reputation as the go-anywhere, do-anything bike that everyone aspires to own someday.

Long Way Round was also my gateway into motorcycling. It was because of Ewan, Charley, and their early-2000s GS bikes that I fell in love with the idea of adventure and, by extension, adventure bikes as a whole. I still dream of having my own BMW GS in the future.

For now, though, I’m lucky enough to have been lent the latest iteration of the BMW R1250 GS HP to test over a weekend. While I have ridden the previous model (and loved it to bits), this newer variant adds a host of features. The question today is, do these features detract from the inherent simplicity of the GS? Or do they enhance the adventure-riding experience? Read on to find out. 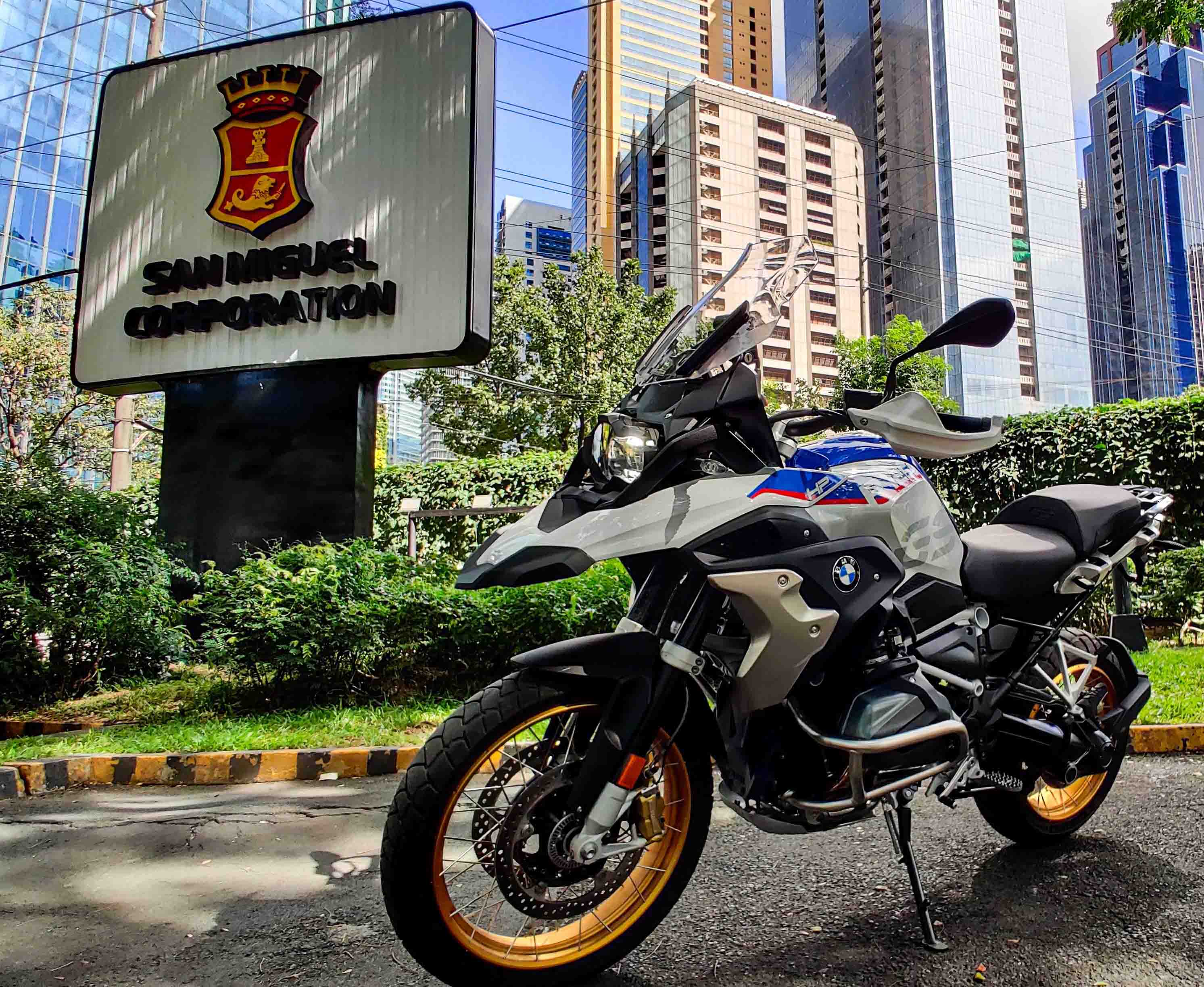 It takes one passing glance at the GS in its BMW red-white-blue livery to realize that it’s something special. The bike screams for attention with its gold spoked wheels. Its massive presence makes it stand out when bombing the trail or—more likely—gracing your friendly neighborhood Starbucks.

Regardless of where this bike is used, one thing is for sure: From the asymmetrical headlamp to the iconic protruding boxer cylinder heads, the R1250 GS in HP guise draws onlookers like a fruit fly to, well, fruits.

Naysayers might lament the fact that the HP designation is nothing more than an accessory pack, but at least where said paint job is concerned, those colors are enough to trigger a sense of buyer’s remorse among those who purchased a regular GS. 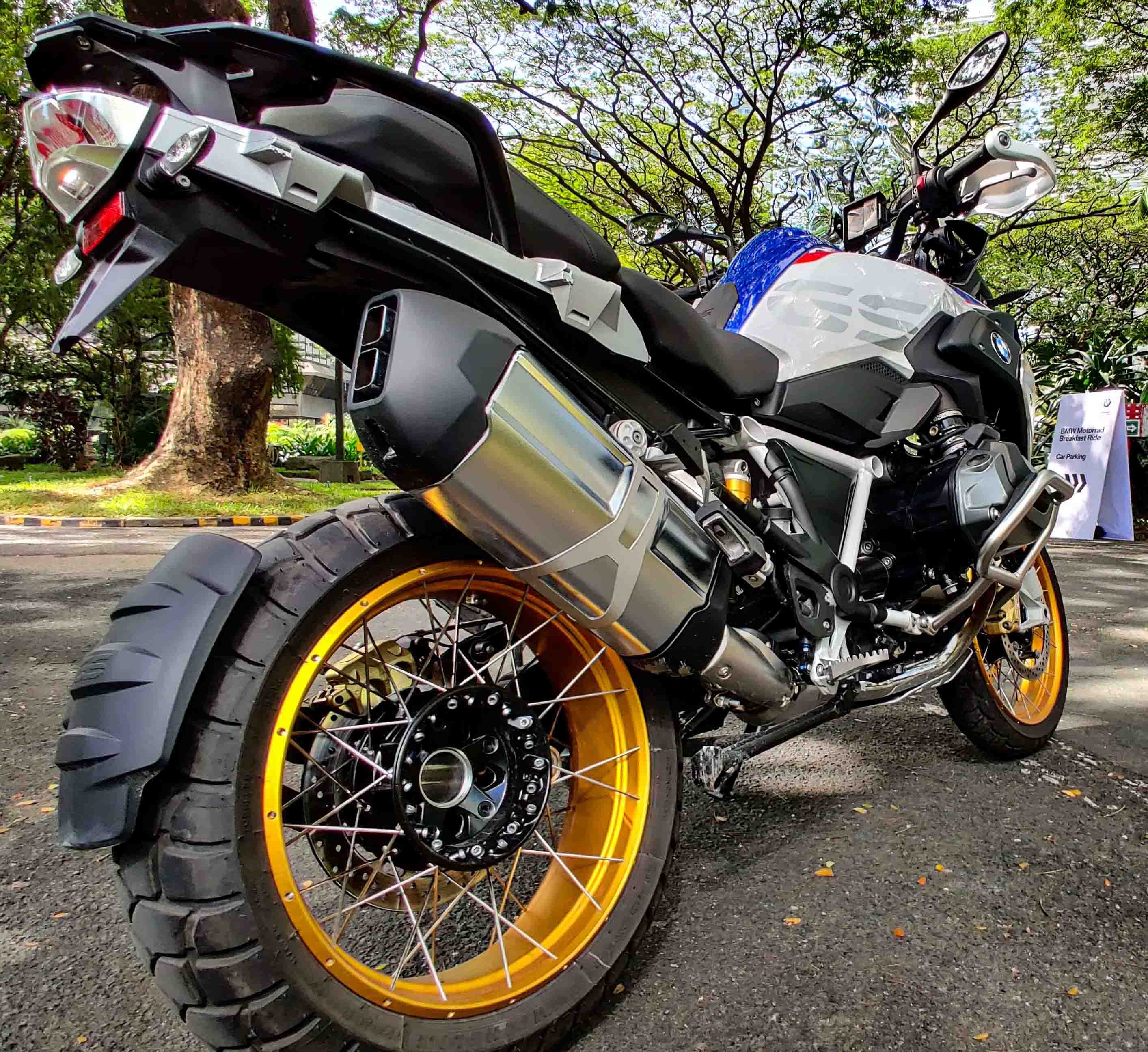 The R1250 GS HP is blessed with what must be one of the best saddles in the business. The two-stepped seat, equipped such that the passenger has a good view over the rider, provides for oodles of comfort on long rides. It’s soft and pliant, and gives good support for your bum, as befits the luxury status that has been attained by the GS over the years.

All the parts your fingers touch are extremely high-quality, as expected of a BMW bike. Switches click with German precision, while the throttle and the levers are easy to modulate. Everything moves with the silkiness of a well-oiled machine.

A highlight of the cockpit is the 6.5-inch TFT display. Extremely clear and exhibiting the smoothest animation this side of an iPad, the screen shows you all the relevant information including Bluetooth and communicator connectivity, tire-pressure monitoring, and bike status, among others. It’s vibrant, legible, and easy to manipulate using the bar-mounted rotary dial—iDrive for bikes, if you will. 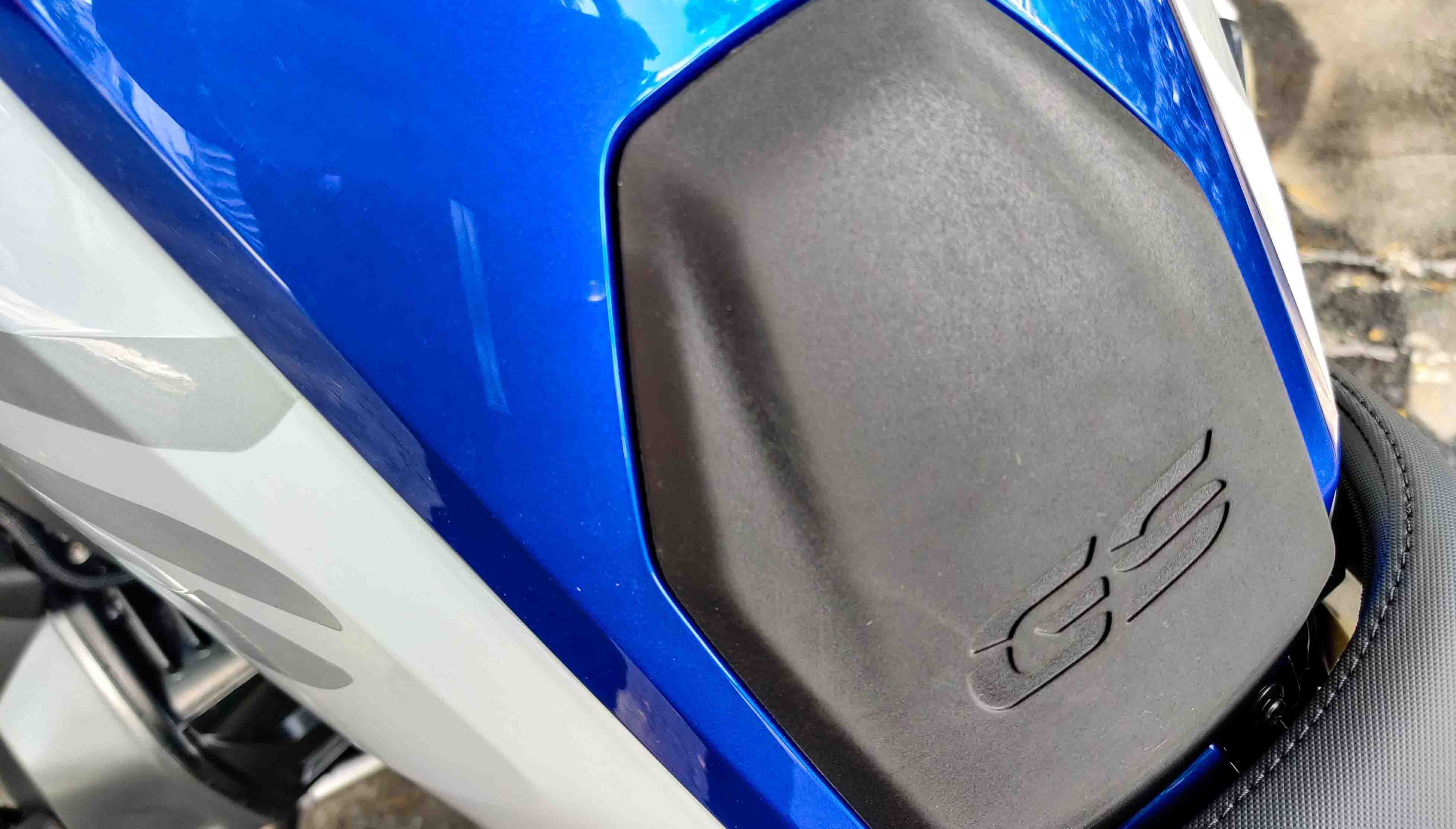 The BMW boxer-twin is one of the most iconic motors in motorcycling. Ranking up there with the Ducati V-twin and the Triumph triple, the brand’s boxer engines are the result of decades of innovation and development, and it clearly shows. While constantly outshone by its louder Italian brethren, the powerplant in the GS has specific characteristics that make it one of the best engines you can slap on a dedicated adventure motorcycle.

First, it’s one of the smoothest in the game. While Ducati may have the market cornered when it comes to “emotion” and “soul,” these traits make its bikes somewhat tiring to sit on after a few hours. The BMW parallel-twin, thanks to its boxer design, smoothens out almost all vibrations. This, coupled with BMW’s signature shaft-drive, makes for an extremely smooth and seamless motoring riding. It’s ideal for those 12-hour riding days and perfect for adventuring.

Second, the ‘1250’ in the R1250 GS’s name signifies that the engine’s displacement is over liter-bike capacity. It has a healthy 134hp, so despite the 268kg curb weight, the GS can hustle—it has enough power to shame most sport bikes in a straight line.

Finally, BMW has the absolute best quickshifter on the market today. Do quick snicks up or down on the shifter, and the bike easily and seamlessly changes gear in an almost telepathic manner without declutching. This means that the GS, in anything except stop-and-go riding, can be ridden almost entirely without laying a finger on the clutch lever. It spoils you such that returning to a regular bike just feels like a letdown. 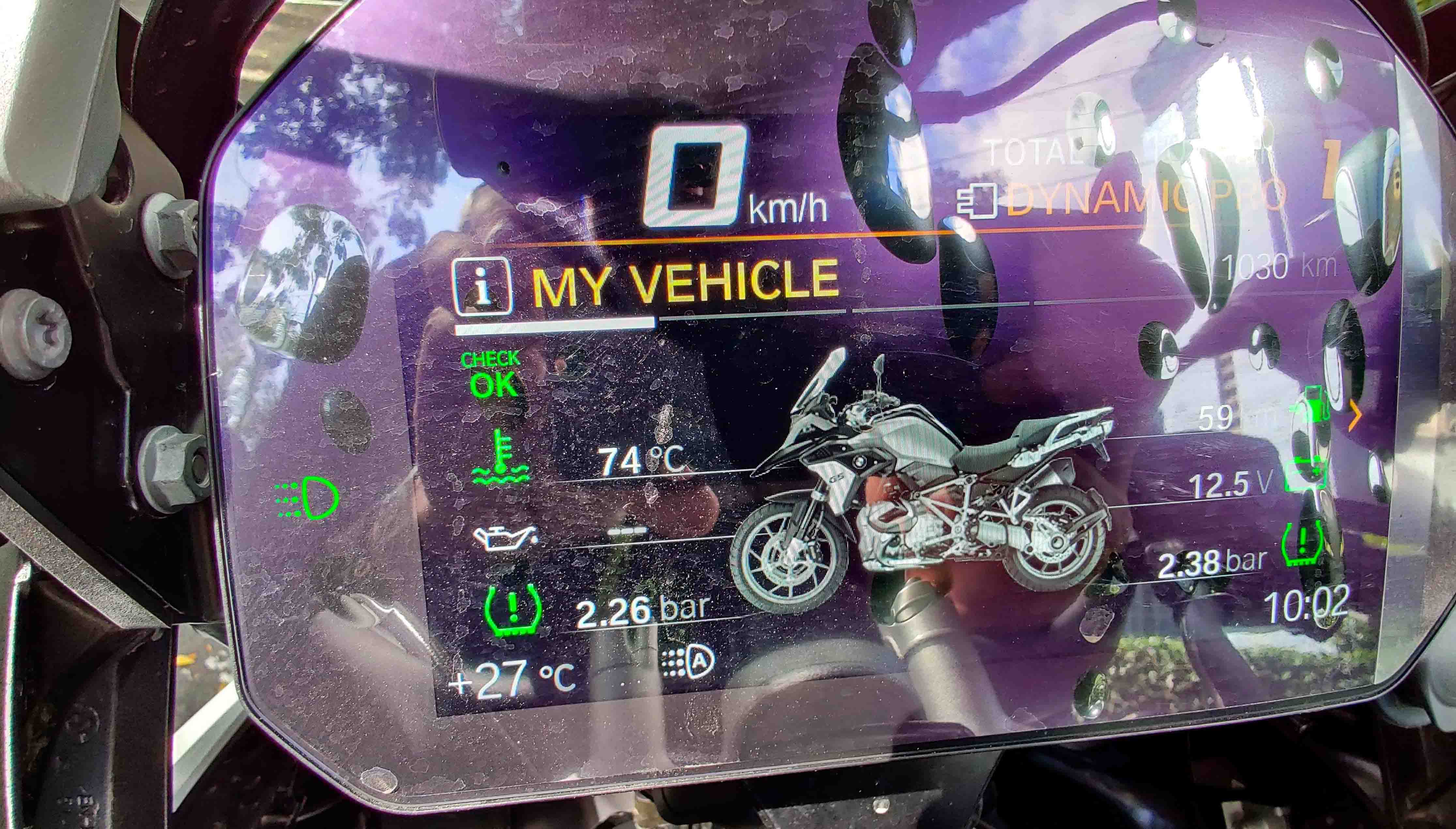 A bike this big has no right to be as nimble as the GS is. You’d think it would be a handful on Manila roads given its immense girth and weight, but like me, you’d be pleasantly surprised that the absolute contrary is true. Given its electronically controlled suspension (which can be left completely on automatic) and low center of gravity (thanks to the boxer motor), the GS handles like an absolute dream, even when filtering through city traffic.

The bike was extremely easy to ride in the confines of the city, nimbly cutting into gaps left by inattentive drivers. Just imagine the looks on their faces upon seeing a massive adventure bike carving its way to the front of the traffic queue as nimbly as any small bike could. Sure, it may be a bit wide, but other than that, riding through traffic was an absolute dream. 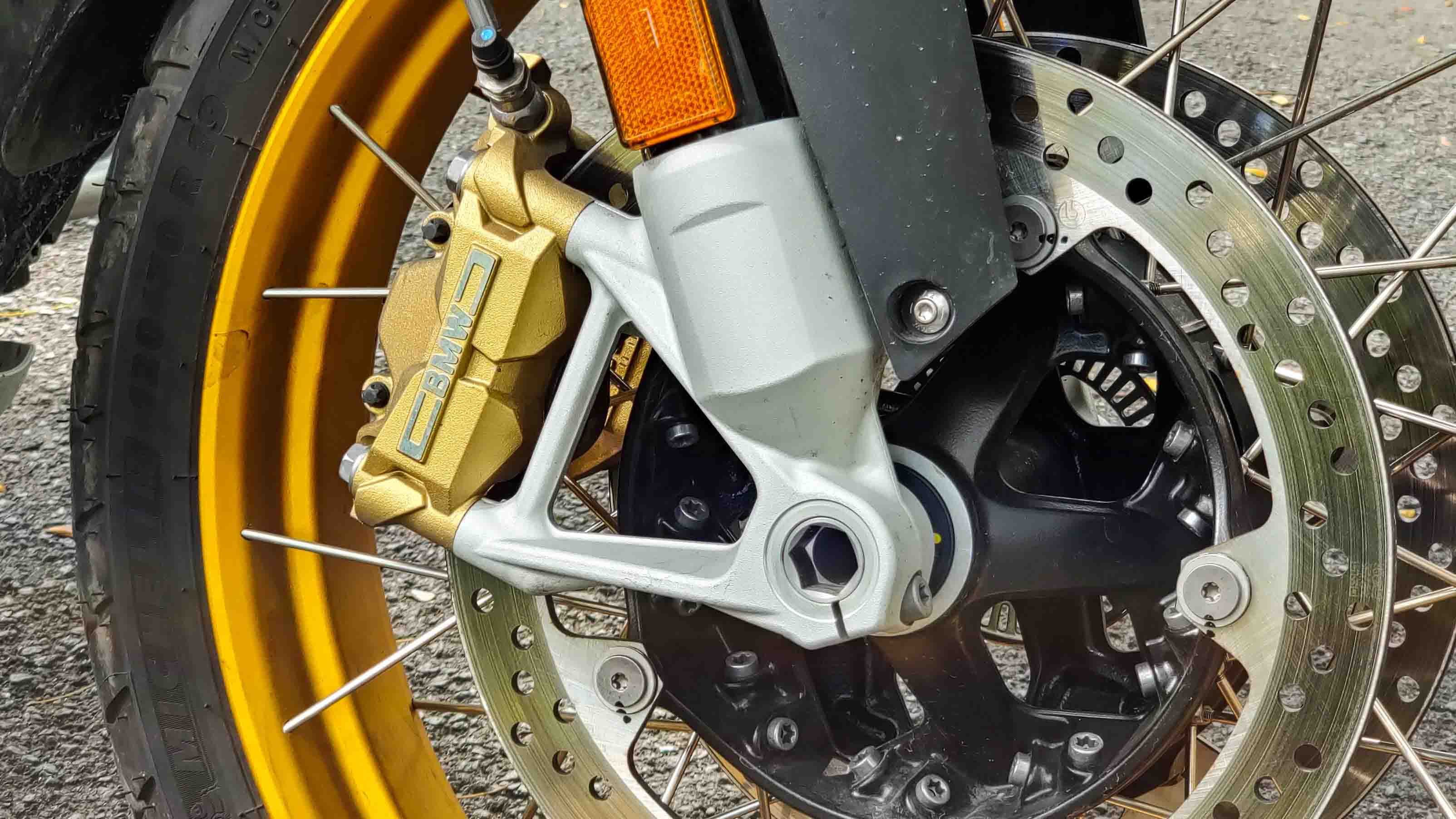 When the roads open up, however, the GS truly shines. The amazing suspension copes with the absolute worst that EDSA has to offer—no surprise given the off-road capabilities of this bike. Give it some beans on a long, sweeping corner, and the bike darts in with astonishing agility.

In sum, the GS rides very well. It is great at slow speeds, but it’s when the bike gets moving that you really realize just how special the combination of a low center of gravity and a perfectly tuned suspension can be to the illusion of lightness. 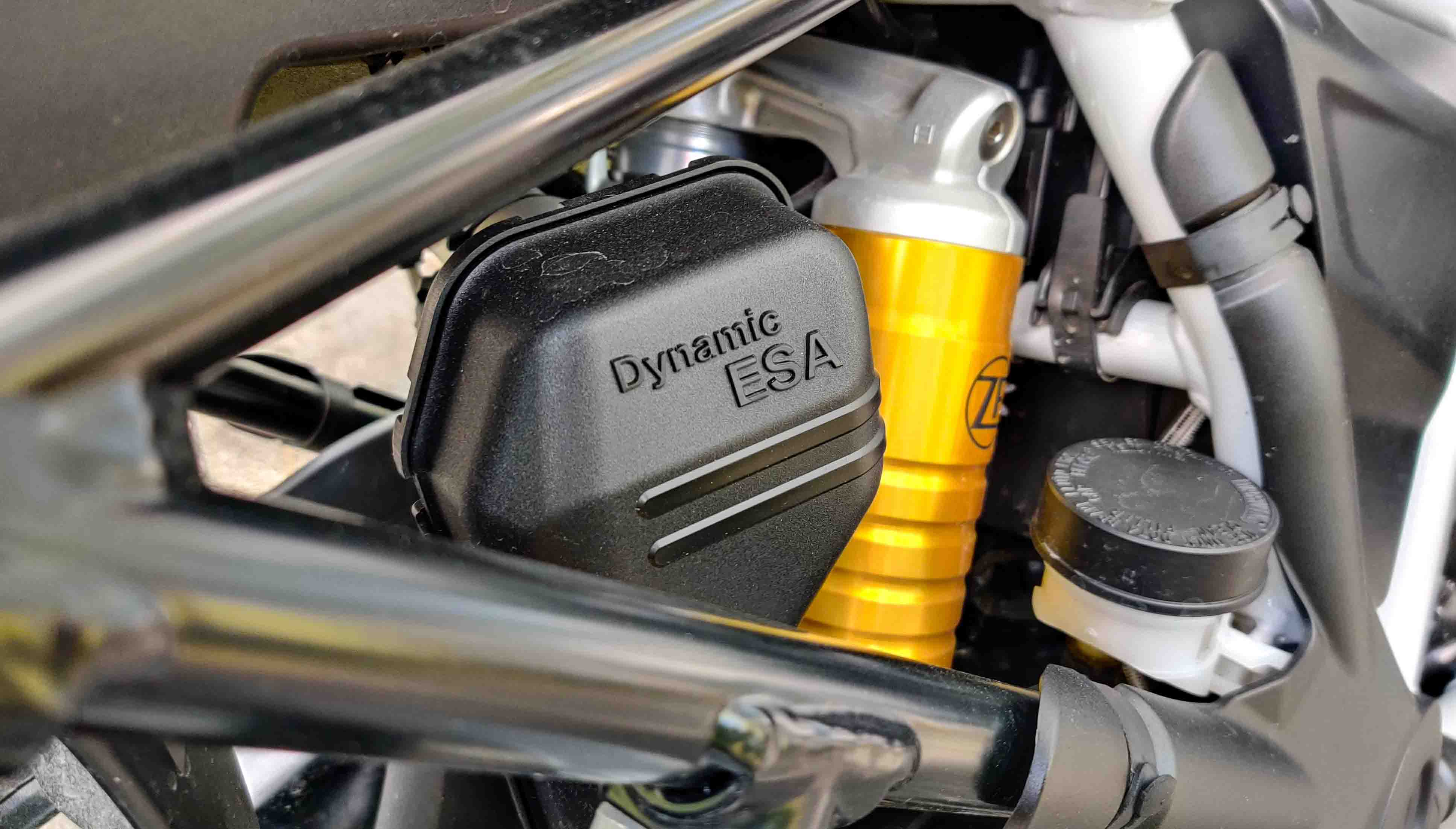 There are literally too many features to list here. The GS, especially in its HP guise, is one of the most—if not the most—feature-packed motorcycle on the roads today.

Aside from the electronic and automatically adjusting suspension, riding modes, traction control, and ABS, one other particular highlight of the bike that must be pointed out is BMW’s cruise-control system. Turn it on at speed, and it’s a revelation. There’s just something special about using cruise control on such a stable platform. You can easily cover hundreds of highway kilometers without the stress of twisting your wrist. Long-distance riders know that wrist strain is one of the most irritating experiences after hours on the saddle. 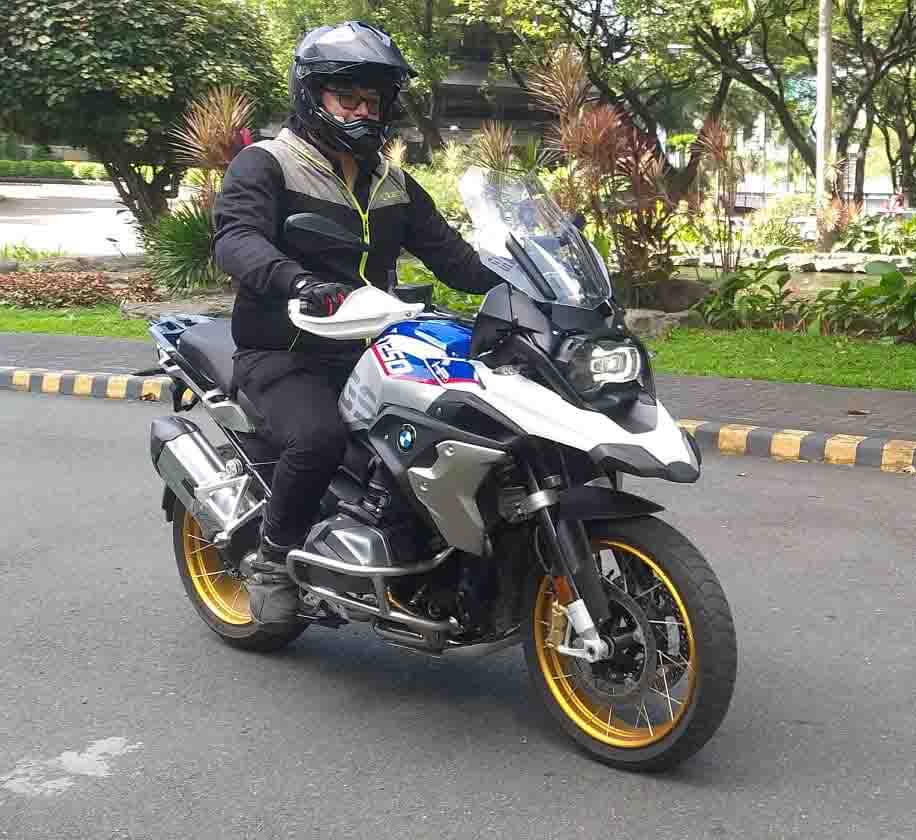 There’s no beating around the bush: the BMW R1250 GS HP is one of the most accomplished motorcycles on the road today. It’s capable in many ways that other bikes could only dream of. It furthers the reputation of the venerable GS line, and is the best iteration yet for the brand.

Prospective buyers could do a lot worse than choosing this adventure bike. It’s a jack of all trades and a master of most. 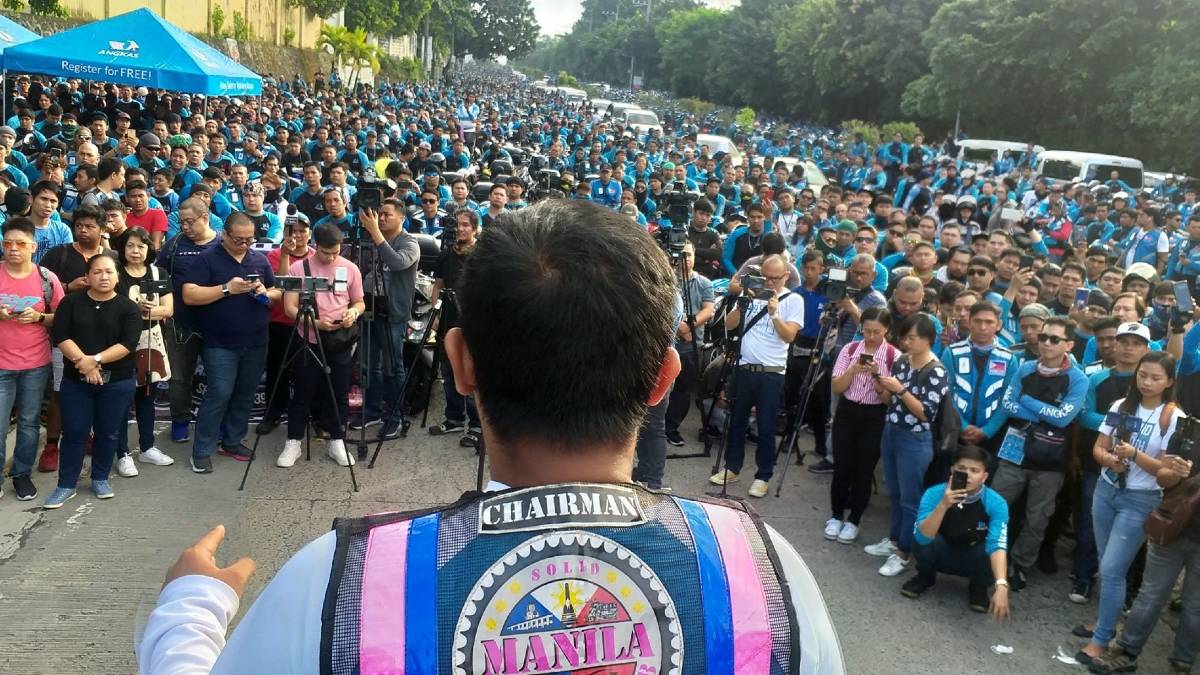 Angkas to DOTr: We want transparency on the pilot-run issue
View other articles about:
Read the Story →
This article originally appeared on Topgear.com. Minor edits have been made by the TopGear.com.ph editors.
Share:
Retake this Poll
Quiz Results
Share:
Take this Quiz Again
TGP Rating:
/20