If you happened to be cruising along the North Luzon Expressway (NLEX) the morning of August 26, then you’ve might have seen around 150 big bikes all heading north in a long, two-column formation. Those were Ducatistis en route to Subic for the National Heroes’ Day ride.

Seeing them from a distance probably made you think it was a mixed-brand ride and not an exclusive Ducati affair simply because there weren’t as many red bikes, right?

Actually, that motorcycle convoy was 99% Ducati—it’s just that red wasn’t the dominant color of the day because a number of the participants were on Ducati Scramblers.

This only confirms that the retro-styled Scrambler is now the dominant force within the brand, dislodging the iconic (and often red) Monster series in sales. Ducati was bold enough to expand its Scrambler lineup from the entry-level 400cc and the middleweight 800cc street fighters to its latest addition, the 1,100cc variant.

For that breakfast ride, Ducati Philippines handed us the keys to a Scrambler 1100 unit—which, by the way, was in classic ’62 Yellow. Check out if this biggest and most powerful Scrambler can straighten up impressions that bikes with timeless designs often fall short in terms of performance. 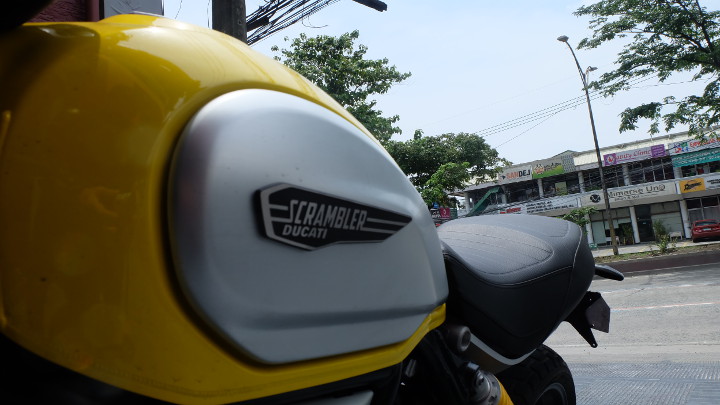 Ducati may have zapped the Scrambler 1100 to grow by a few millimeters compared with its smaller siblings, yet there are still striking similarities among the three in overall appearance. You need to look closely to spot how the 1100 is different from the 400cc and 800cc versions.

Most recognizable are the bigger fuel tank, the wider seats, and lots of aluminum covers with strokes of light-machine finish. Gone is the rear wheel-mounted fender that we see on the 400cc since it’s usually the first to go when customization begins. Another striking new feature is the metal headlight design with an X-shaped motif and LED day running lights completing the striking Scrambler-family front end. 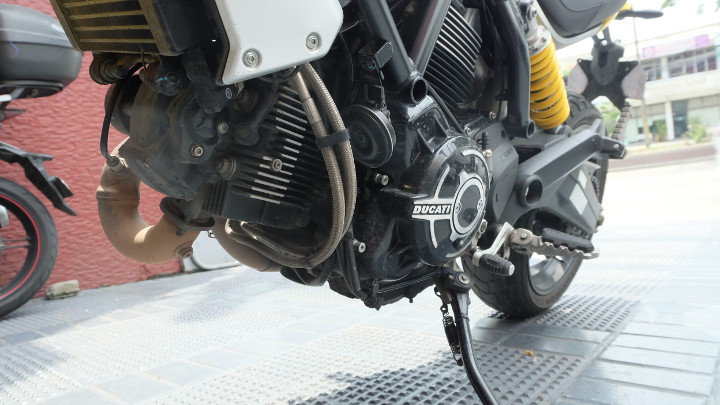 Riding some 300km from Manila to Subic and back in one day can be exhausting. Roads leading to Subic are said to be ‘well-paved,’ but for riders, there are still imperfections on the tarmac that can trigger back pains if the bike’s suspension system does not do its job well.

In terms of riding stability, the 1100’s fully-adjustable Marzocchi front suspension and Kayaba rear shock absorbers, adjustable for preload and rebound, took care of those little annoying bumps on the tollway with ease and finesse. This is when the Scrambler 1100 shines best. The rider is accorded better comfort with a considerably wider, supportive seat, although it is positioned almost an inch higher off the ground compared with the 800cc variant’s saddle. Still, even not-so-tall riders will hardly notice the change in seat height.

Aside from the Scrambler’s upright riding posture, the neutral position of the foot pegs provide ample legroom, which is another plus in riding comfort during long trips. 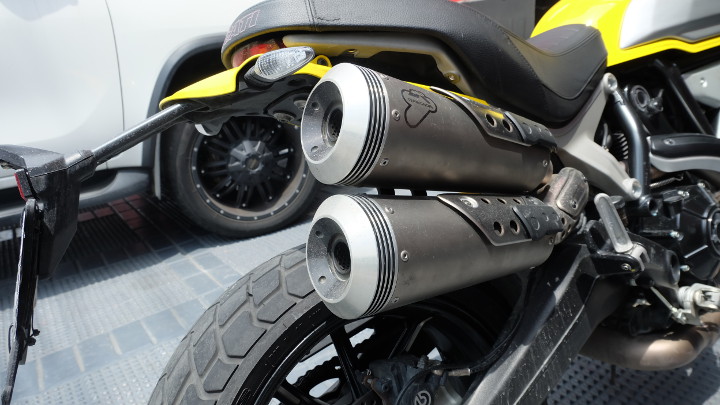 Basically derived from the Ducati Monster Evo 100’s engine, the Scrambler 1100’s powerplant is a redesigned unit that still embodies a monstrous attitude when needed.

The 1,079cc air-/oil-cooled L-twin provides a flat tabletop of torque that makes the Scrambler easier and more fun to ride. During relaxed cruising, it responds smoothly at the twist of the throttle. Ducati cites peak torque of 88Nm at 4,750rpm, and torque delivery stays completely flat up to 6,500rpm.

Maximum power depends on the available three riding modes: Active, Journey, and City. The first two accord the rider the full 86hp, while City lowers that to 75hp, making the Scrambler 1100 more manageable to handle in traffic.

From Journey, I switched to Active as I entered NLEX and SCTEX, and even in the more aggressive mode, there was hardly any throttle twitchiness as the beast mode in me became alive, wanting more speed. Another big surprise was the low vibration level of the 1,100cc engine in almost the entire rev range.

By the way, the base Scrambler 1100 we rode was equipped with a pair of Italian-made Termignoni exhausts that produced a satisfying throaty sound. 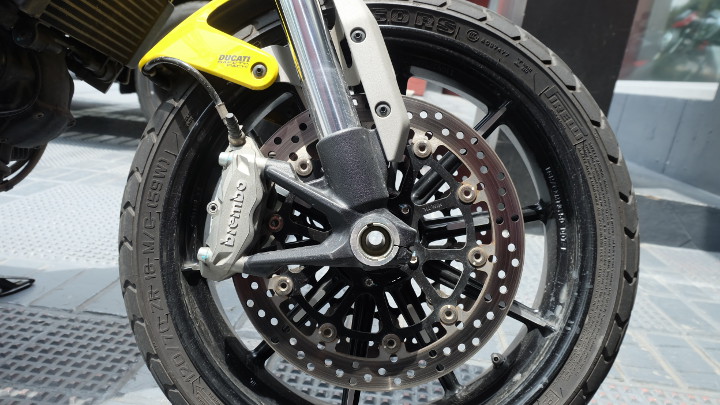 The Scrambler 1100 may be bigger and faster than the rest of its Scrambler kin, but it gives an easy-to-ride vibe such that even newbie riders can tame it even after a few kilometers of riding. This 206kg (wet weight) bike leans into turns with just the right amount of effort—just like the Scrambler 800cc, despite carrying an extra 18kg.

Did I feel the bike sit every time I became more aggressive with the throttle? Yes, but only a little, unlike its two siblings. The size advantage makes the Scrambler 1100 stable at high speed—and with this, I mean 180kph and above.

Stopping power is provided by high-performance Brembo brakes equipped with Bosch 9.1M cornering ABS, which is activated every time the inertial measuring unit (IMU) detects the bike is in leaning position. The Scrambler also comes with standard single-setting ABS, which cannot be deactivated.

Surprisingly, finding the neutral gear position is easier in the 1100 versus in the two smaller Scramblers, which force the rider to kill the engine first before the gear disengages. The 1100’s hydraulic clutch is also incredibly light to operate.

Here’s another issue of form versus function: When riding on the pavement, I had to be mindful that Scramblers are fitted with cross-country tires that have a lesser grip on the tarmac. 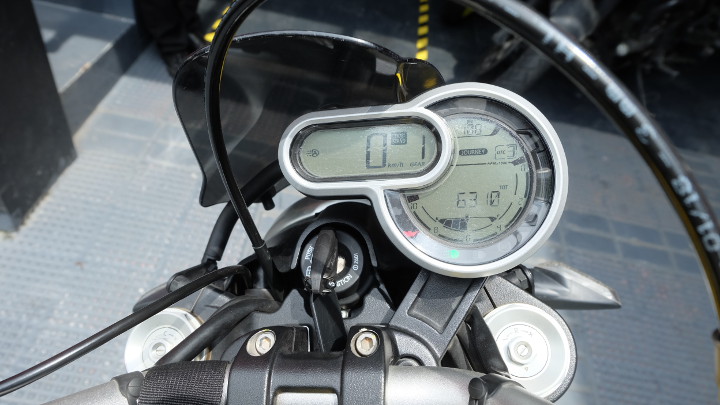 Being a retro-theme bike, the Scrambler 1100 can be distinguished from its two siblings through the unique configuration of its fully-digital instrument cluster.

Alongside the round LCD common to all Scramblers is an oval-shaped display extension that shows the side-stand warning, speedometer, and gear position. On the main display are the tachometer, clock, DTC (Ducati Traction Control) setting, riding modes, and fuel-level indicator.

Of note, the IMU-controlled LED turn signals automatically turn off after the bike completes a turn and returns to an upright position. Isn’t that cool? 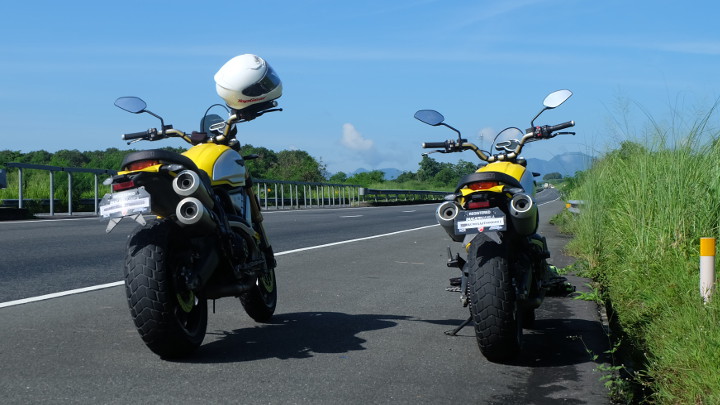 The battle for sales supremacy in the modern-retro bike segment is now picking up. From small-engine to liter bikes, every motorcycle manufacturer is coming up with its own version of timeless machines to take a piece of the sales pie.

Priced at P925,000 for the base variant, the Scrambler 1100 undoubtedly belongs to the premier league. Considering its impressive styling and cool electronic package that highlight rider safety, we think that this awesome bike is worth considering, too.

What’s that? Did we hear someone say retro bikes usually end up for keeps? 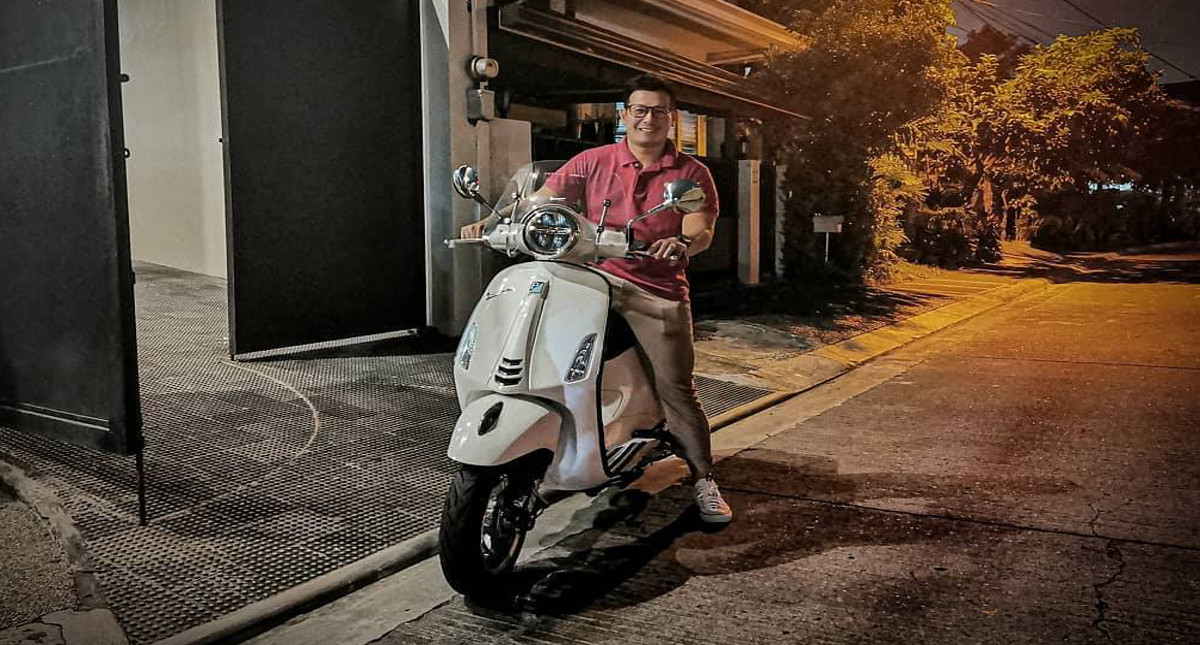 Looks like actor John Prats has been bitten hard by the scooter bug
View other articles about:
Recommended Videos
Read the Story →
This article originally appeared on Topgear.com. Minor edits have been made by the TopGear.com.ph editors.
Share:
Retake this Poll
Quiz Results
Share:
Take this Quiz Again
TGP Rating:
/20