Getting to know this beginner-friendly bike
by Matthew Galang | Jul 16, 2018
MOTORCYCLE BRANDS IN THIS ARTICLE 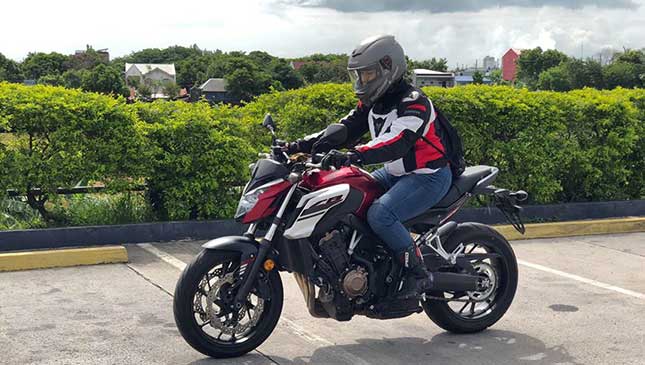 Spontaneous rides up to Batangas just for a bowl of lomi might sound far-fetched and ridiculous to some people, but for riders, especially those with big bikes capable of traversing SLEX, such instantaneous escapades are commonplace.

When my editor invited me out for a quick Sunday ride for breakfast in Batangas, I instantly started to think of how I’d navigate the side roads on my 250cc Kawasaki Ninja since my bike wouldn’t be allowed on the expressway.

But lo and behold, my boss told me I’d be lent a Honda CB650F test unit from Honda Philippines. And with it came my introduction to highway riding. 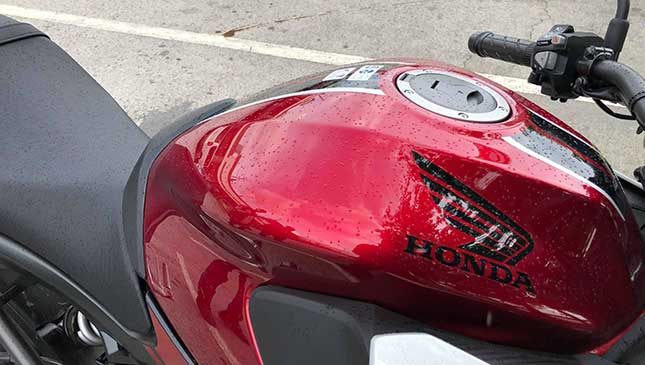 As far as first impressions go, the CB650F did not disappoint. When my editor sent me a picture of the bike I’d be using the night before, I instantly fell in love.

Things like the gorgeous Candy Chromosphere Red paint scheme, the exposed inline four-cylinder engine with bronze engine covers, the muscularly angled body lines, and the exhaust headers that flowed beautifully down to the right side of the engine had me up all night.

The CB650F is the naked counterpart of the more sport touring oriented CBR650F, but it isn’t just the CBR with the fairings pulled off. It looks like a proper naked sport bike: Handsome, upright, and unafraid of showing off all its mechanical goodies. 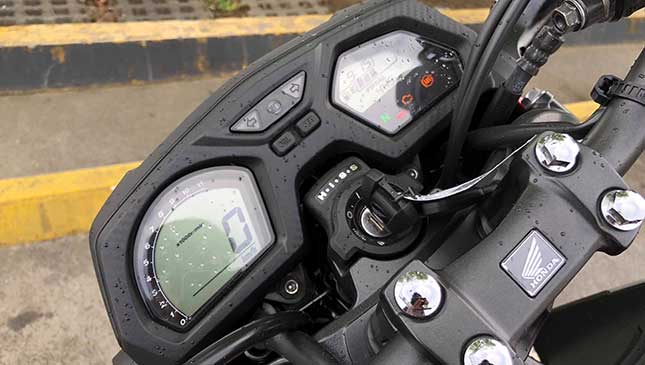 Riding my Ninja day in and day out, I’d gotten used to the stiff sport seat it came with. When I swung a leg over the CB650F and took it for a quick ride around to get acquainted with the controls and position, the very first thing I noticed was how comfortable the seat was.

The naked bike’s saddle was soft, properly cushioned, wide enough for my larger-than-average butt and contoured in just the right way to properly support my behind.

The riding position felt totally natural. With my back mostly upright and the handlebars high and wide, it almost felt like riding a bicycle. The seat height was just right for my average 5’7" stature, with the frame slim enough for me to put both of my feet down almost flat on the ground.

The bike’s control surfaces were all of decently high quality. My only gripes were the digital dash that became near unreadable under harsh sunlight, and the lack of a gear position indicator and temperature gauge. The premium feel of the bike would make you think it was built in Japan, and not in Thailand where it is really produced. 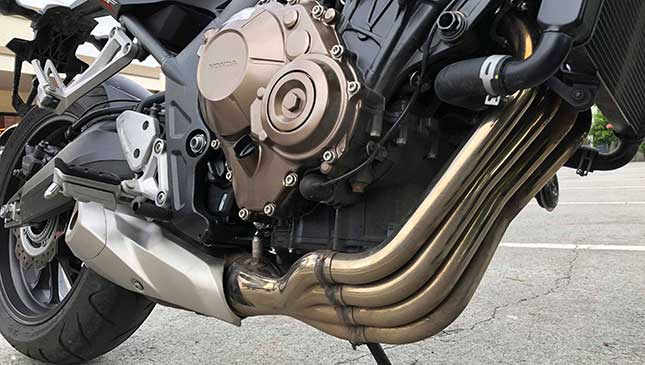 The CB650F is equipped with Honda’s midsize 649cc four-cylinder engine. The powerplant felt responsive but not jerky, and was friendly enough for a big bike newbie like me despite having 90hp. Around town the CB650F was usable and comfortable, and because of the gearing, I rarely had to shift up from first gear.

On the freeway, the bike really came into its own. The inline-four gave me ample power lower down in the rev range, but really started putting power down after around 8,000rpm. Once the revs have built up, the bike had ample grunt to overtake buses and cars as if they were at a standstill. It felt totally at ease going balls to the wall when the freeway cleared up.

The growl of the inline-four didn’t disappoint either. A simple twist of the throttle at idle sounded like music to my ears that are unused to four-cylinder mills.

The engine comes mated to a 6-speed transmission, which is closely geared from second to fifth gear. Surprisingly, I didn’t stall the bike, which has happened several times with unfamiliar motorcycles. Neutral was also relatively easy to find, with false neutrals being totally absent as long as I shifted surely and deliberately. 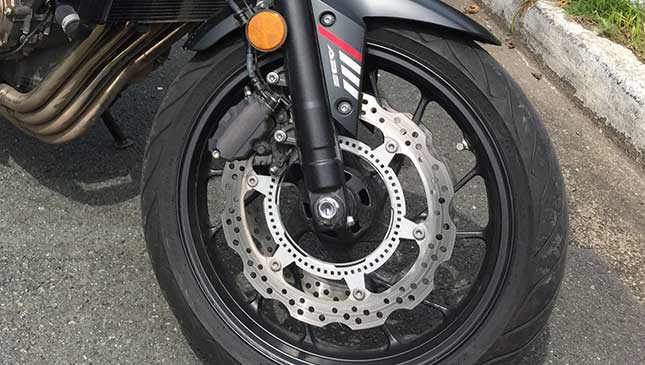 Honda’s engineers really knew what they were doing when they designed this bike. The ergonomics immediately feel right and are easy to get used to. My only issue with the riding position is the amount of wind your shoulders and chest catch when riding at speed. But that’s nothing an aftermarket windscreen or simply tucking down on the bike can’t fix.

The Showa Dual Bending Valve fork up front and single shock at the rear do a great job at soaking up the little cracks and imperfections on the highway, but the potholes and really rough roads in town might still necessitate standing up on the bike to prevent your spine from taking the brunt of the bumps.

Turning is a breeze thanks to the CB’s ergonomics and suspension, though stickier tires (Dunlops are stock) would better accentuate the bike’s sporty cornering. Lane splitting is very much possible thanks to the bike’s narrow stature, and the wide bars make it easy to dart around town.

Braking’s responsive and predictable. The dual discs up front have sufficient bite, but don’t feel surprising under heavy braking. ABS comes standard for the Philippine market, a feature that helps the CB650F’s score as a first big bike. 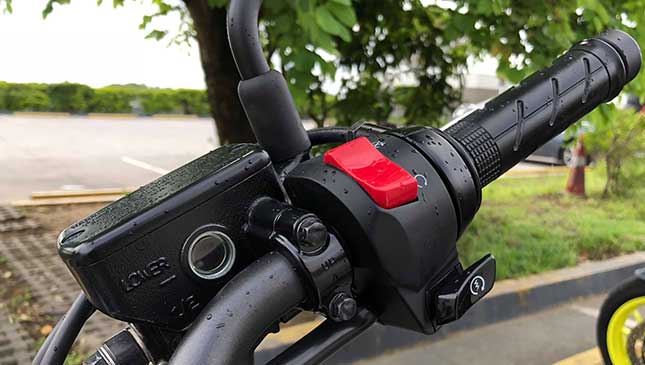 The CB650F comes with a built-in trip computer, with nifty features like fuel economy and range. The screen’s easy enough to navigate and get a hang of over the course of a day.

A neat bonus on the bike was the thick, cushioned tank pad that both protected the bike’s paint and my crotch when I had to brake hard.

Carrying around a passenger is a cinch on the CB650F, too, with the wide seat and the sturdy passenger grab handle; a huge step up from the flimsy plastic rails you’d see on other bikes.

The rubber-mounted handlebars may not sound all too special, but your wrists will thank you when you’ve been riding for hours and your hands aren’t shaking. 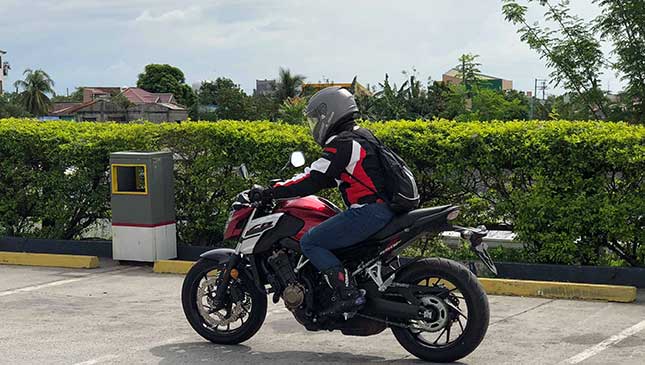 The CB650F checks all my boxes for an ideal first big bike: Stylish, powerful and surprisingly friendly. Never having ridden a bike over 400cc anywhere far, I thought I would be riding in fear of my life the whole time. But Honda’s middleweight naked bike was easy enough to get used to that after just a few hours, it felt like I’ve owned it for months.

My time with the CB650F was limited, however, and I almost immediately started to miss the bike when I had to return it. I’m thankful to Honda’s sporty naked. Not just for showing me a good time, but also for giving me the perfect first encounter with a large-displacement motorcycle.

How about a Honda CB650F as a graduation gift? Hello dad and mom! 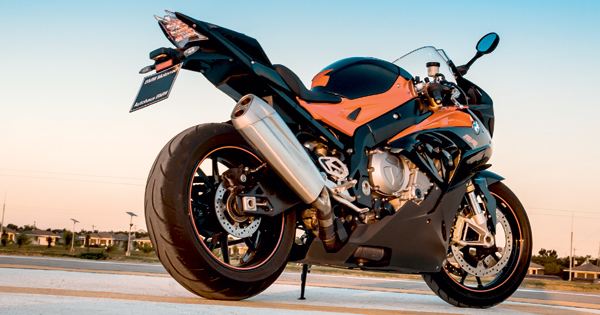 The BMW S1000 RR takes pole position in the superbike class
View other articles about:
Recommended Videos
Read the Story →
This article originally appeared on Topgear.com. Minor edits have been made by the TopGear.com.ph editors.
Share:
Retake this Poll
Quiz Results
Share:
Take this Quiz Again
TGP Rating:
/20