“History repeats itself,” the old saying goes. This holds true for most things, motorcycle trends included. As such, retro- and vintage-style bikes are back in fashion, with all big motorcycle manufacturers producing some sort of retro-classic-styled or ‘old new’ bike to cash in on the trend.

Where does that put Royal Enfield, then? This British-badged Indian motorbike company never had to hop on the retro bandwagon, after all, because it’s been retro before the whole retro movement. It builds bikes that look right at home in a collector’s classy garage, and it’s clever enough to add modern features and technology to enhance its time-tested design formula.

A great example of this is the Continental GT 650, which we had the opportunity to frolic with for a few days. Keep reading for our thoughts on this promising middleweight:

The thing with classic bikes is they look great now and will continue looking great decades later. The designers clearly knew what they were doing, as the Continental stays true to the spirit of its 250cc ancestor bearing the same name back in the ’60s. As a modern factory-built café racer, the Continental is brand-new, but it looks like it came right off the set of a ’60s movie starring guys with slicked back hair, leather jackets, and switchblade combs.

One of the first things that caught my eye is the paint scheme. The gloss-white gas tank with a gray/blue stripe tastefully keeps things simple and classic, yet adds a little splash of modern style. The tank stands in contrast to the rest of the mostly black-and-silver bike, helping the color pop even more. Even the name of the paint job, ‘Ice Queen,’ sounds cool.

True to its classic image, the Continental comes equipped with a round, black headlight trimmed with chrome, wire-spoke wheels, dual rear shocks, and dual-exit exhaust pipes. Royal Enfield’s British heritage is very much alive and well in the Continental’s styling; the bike would probably fit in a lineup of classic British models outside your local café or pub.

The Continental’s riding position is exactly what you’d expect from a café racer: racy and aggressive, but a bit tiring on the rider’s wrists and back. Thankfully, the clip-ons aren’t mounted too low and the rear-set foot pegs are at a reasonable position. While other aggressively positioned bikes had me feeling like I have back problems at 21 years old, the Continental let me feel a lot cooler than I really am without too much complaints from my wrists and lower back.

The seat easily accommodates Filipino riders. It’s 31.2 inches high and slim between the legs, meaning many average Filipinos can comfortably put down at least one foot at stoplights. It’s also very forgiving when it comes to butt comfort, and I’m sure rear passengers will appreciate the ample cushioning and the sturdy grab bar.

Royal Enfield has kept rider comfort in mind when designing the Continental, adding engine guards that protect your legs from touching the twin-cylinder powerplant (which gets a little bit hot when in traffic) and indents in the fuel tank for your knees to grip onto. Sadly, my legs weren’t long enough to fully benefit from this: Even when I scooted all the way forward, my knees didn’t reach the indents.

The 648cc parallel-twin engine on the Continental and the Interceptor, all-new for Royal Enfield, is a perfectly capable middleweight unit that has more than enough go to let you have fun, but not so much that less-experienced riders will feel they’re constantly fighting for their life.

Producing a claimed 47hp and 51.52Nm of torque, the Continental’s mill will comfortably deal with whatever you throw at it, whether it be carving up the twisties or cruising down the expressway at a leisurely pace. While this bike won’t be winning any drag races, it won’t fail to leave a smile on your face when you twist the throttle and feel how smooth the engine runs and pulls. It would be great for riders new to big bikes, especially because of how the responsive throttle delivers power instantaneously yet gives no unpleasant surprises. The Continental does decently in the sound department, too, with a subdued rumble that might be better appreciated with an aftermarket pipe.

Thanks to the slipper assist clutch, shifting on the Continental is a breeze, and I never found myself running into any false neutrals. The bike’s tall gearing feels just right for cruising, but it still provides enough power at low revs for enjoyable takeoffs.

As expected of a café racer, the Continental handled a bit like a sport bike, with counter steering playing a bigger role in convincing it to turn thanks to the clip-on handlebars. Whether it was around turns or on the straights, this motorcycle felt reassuringly planted, with only bigger bumps and dips upsetting the 41mm conventional forks and dual rear shocks.

Despite only a single disc up front compared with the dual-disc setup on most middleweight competitors, braking was totally fine. The Continental’s Bybre brakes, combined with the Bosch ABS unit, confidently saved me from sticky situations. I also have no complaints with the grip provided by the Pirelli Phantom Sportscomp tires that not only grip the road reasonably well, but also add a bit more vintage flair and appeal.

Bikes like the Continental usually aren’t picked for their extra features, since they’re supposed to be stripped-down two-wheelers built in homage to historical machines. The Continental has everything you need (except maybe for a clock in the display) and nothing you don’t, just how a bike like this should be.

That said, I was pleasantly surprised to find that the Continental had a little secret that I would have missed if not for the helpful guys at Royal Enfield Makati. With most motorcycles, the toolkit is stored under the seat, but here, the toolkit is hidden within a panel on the right side of the bike, unlocked with the bike’s key. While small, the kit contains basically all the tools necessary to take the bike apart for most repairs, which goes to show how this model is built to be tinkered with and repaired without much fuss.

Another neat feature is how the engine has been designed to be able to run on lower-octane fuel, thanks to conditions in India where the bikes are produced. This means you don’t have to be as picky when you’re running low on gas out in remote areas, though it’s still recommended that you fill up on the good stuff for better performance.

A solid, reliable machine that looks good and rides fun to boot, the Royal Enfield Continental GT 650 is a prime choice for someone in the market for their first big bike. Whether you pick the Continental or the Interceptor depends on your preference of handlebar setup, but fundamentally, both these bikes would be a great purchase for someone who wants to experience the fun and style of owning a big retro bike in a hassle-free way. 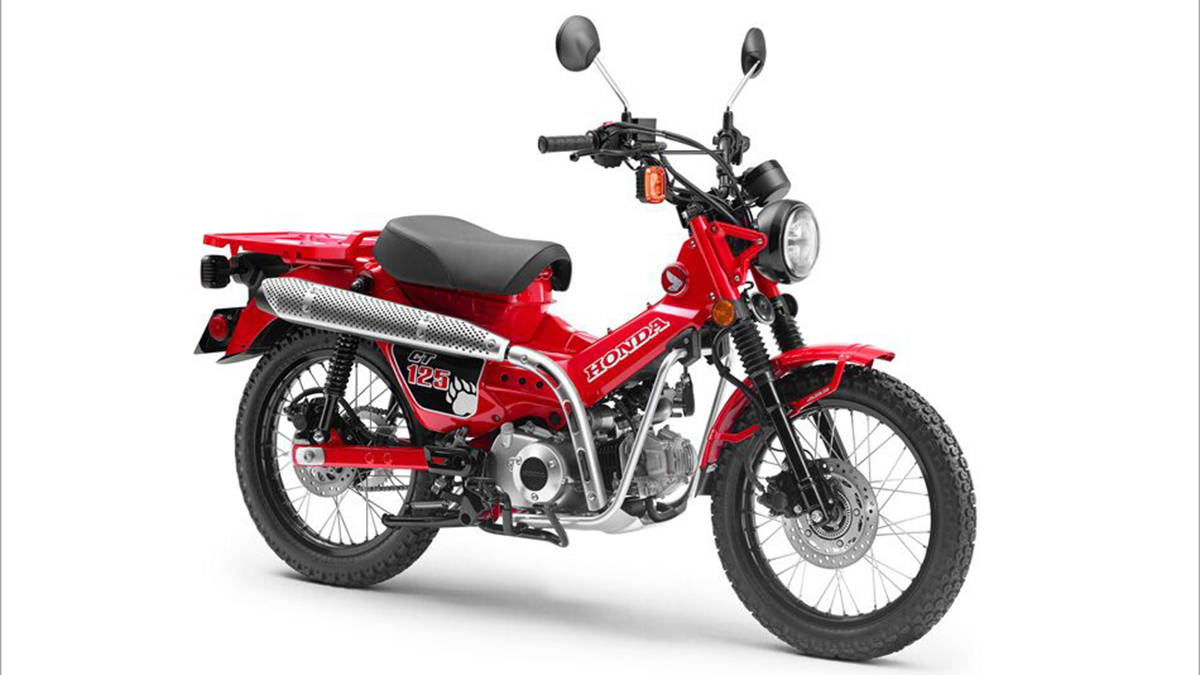 The CT125 is a Super Cub-based Honda motorbike with a unique retro vibe
View other articles about:
Read the Story →
This article originally appeared on Topgear.com. Minor edits have been made by the TopGear.com.ph editors.
Share:
Retake this Poll
Quiz Results
Share:
Take this Quiz Again
TGP Rating:
/20