Foton
The Christmas season may be over but that doesn't mean carmakers and distributors have stopped being generous to vehicle buyers. Here are the top deals to kick off the year.

Fancy getting a BMW? Asian Carmakers Corp., the official distributor of BMW in the Philippines, is offering the BMW 1-Series at its most affordable promo to date. With a downpayment of as low as 30 percent on a deferred payment scheme of up to 30 months, one can take home any of the BMW 1-Series variants--the 116i, the 120d Sport, the 120i Convertible or the 135i Coupe--at zero-percent interest. 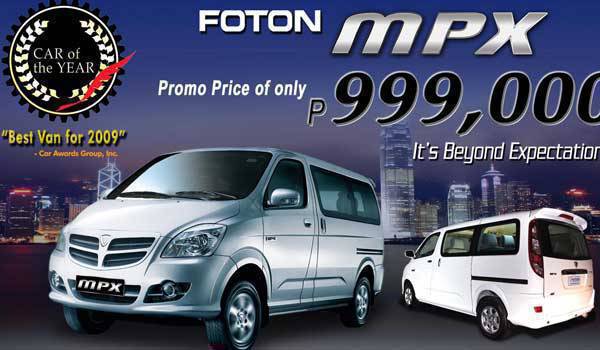 Foton Motors expresses its gratitude to the Philippine market after bagging the Best Van of 2009 award from the Car of the Year body by slashing P121,000 off the MP-X price tag.

Isuzu Philippines offers a P20,000 discount for Crosswind and P40,000 for D-Max purchases, plus a chance for buyers to take home one of six 40-inch Samsung LCD TV with home theater package, one of two Canon EOS-450D digital SLR camera, or one of three Nintendo Wii console and accessories.

Potential car buyers who register at IsuzuPhil.com for a test drive also get a chance to win a 120-gig Apple iPod Video with two Skull Candy T1 headphones, one of two HP Mini netbooks or one of three Oakley sunglasses.

Those who visit Isuzu showrooms take a D-Max or an Alterra for a spin stand a chance to bring home a 32-gig Apple iPhone 3GS, one of two Sony PlayStation 3 units, or one of three Canon IXUS 95IS digital cameras.

Nissan Motor Philippines makes the 1.3-liter Nissan Sentra GX variant available for the price of two cups of cappuccino or P238 a day for the next five years. That's P610,000 if you add it all up. The offer comes with a three-year LTO registration, chattel mortgage and one year comprehensive insurance with Force Majeure or Acts of God coverage.

Viking Cars, the official distributor of Volvo vehicles in the Philippines, is giving away a rear seat entertainment system with every Volvo XC90 purchase until January 15.