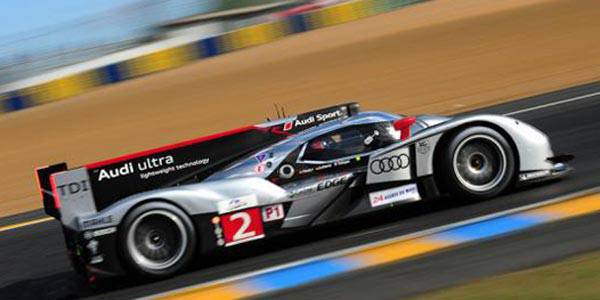 It was a bittersweet--mostly sweet, we admit--victory for German carmaker Audi at the 2011 24 Hours of Le Mans, the 79th staging of the popular endurance race. Let's just say Audi fielded in three R18 TDI units and two of them crashed violently. The third one that did finish, however, won the race--by just 13.8 seconds over a pursuing Peugeot 908.

Car No. 2 of Audi Sport Team Joest completed 355 laps behind the brilliant driving of pilots Andre Lotterer, Marcel Fassler and Benoit Treluyer, to win this year's Le Mans race. Audi cars No. 1 (another entry by Audi Sport Team Joest) and No. 3 (Audi Sport North America) separately collided with Ferrari cars, with defending champion Mike Rockenfeller and former Formula 1 driver Allan McNish at the wheel, respectively. Both crashes were spectacular, but the two Audi drivers were not seriously hurt.

By winning this year's Le Mans race, Audi broke its tie with Ferrari for the second most number of wins at the historic event. Audi's 10 victories put it in solo second place behind Porsche (16) and just ahead of Ferrari (9).

Peugeot's car No. 9 (Team Peugeot Total)--driven by Sebastien Bourdais, Simon Pagenaud and Pedro Lamy--came so close to catching the winning Audi car that a mere 13 seconds separated the two at the finish. Another Peugeot racer--car No. 8 (Peugeot Sport Total) driven by Stephane Sarrazin, Franck Montagny and Nicolas Minassian--took third place.

The 355 laps (4,838km) completed at Le Mans this year are significantly fewer than the 397 laps (5,410km) managed by the winning car last year, the Audi R15 TDI of Mike Rockenfeller, Timo Bernhard and Romain Dumas. The current R18 TDI, however, has a much smaller engine: a 3.7-liter turbodiesel V6 compared to the R15 TDI's 5.5-liter turbodiesel V10.

Japan tests charger-equipped roadside service vehicle for EVs
View other articles about:
Read the Story →
This article originally appeared on Topgear.com. Minor edits have been made by the TopGear.com.ph editors.
Share:
Retake this Poll
Quiz Results
Share:
Take this Quiz Again
TGP Rating:
/20