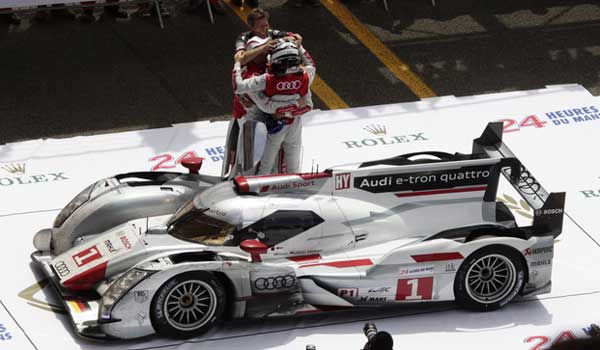 The German carmaker achieved a technological milestone in motorsports over the weekend. On the 80th staging of Le Mans, Audi took the top two spots. With a pair of hybrid cars at that.

The four Audi R18 cars from Audi Sport Team Joest turned out to be the quickest and most reliable vehicles. After 24 hours, they occupied positions one, two, three and five.

"By achieving this further success at the world's most important endurance race, our engineers demonstrated their high technological expertise in a particularly impressive way,” said Audi chairman Rupert Stadler, who was in attendance during the race. "With the e-Tron Quattro in combination with ultra-lightweight design, we put a completely new technology on the grid and immediately won with it. This cannot be taken for granted by any means, particularly here at Le Mans. This weekend again showed the type of things that can happen in this race and how important perfect preparation is."

All four R18 cars was at one point in a position to clinch Audi's 11th Le Mans victory. But after 378 laps, last year's winners--Marcel Fassler, Andre Lotterer and Benoît Treluyer--at the wheel of the Audi R18 e-Tron Quattro No. 1 were again the front runners. Dindo Capello, Tom Kristensen and Allan McNish in the other e-Tron Quattro wound up in second place.

Operating at the rear of all four Audi R18 cars was a compact V6 TDI engine with VTG mono turbocharger that was used at Le Mans for the first time in 2011. The new ultra-light transmission with a carbon-fiber housing--another novelty in a Le Mans sports car--held up to the Le Mans endurance test covering a distance of 5,151km in all four vehicles without any problems.

Allan McNish had an accident in the fast Porsche corners less than three hours before the finish, but the team managed to repair the heavy damage at the front of the R18 e-Tron Quattro in record time.

The winning car, with chassis number R18-208H and nicknamed "Electra," was not spared from incidents either. Marcel Fassler touched the track barrier twice on Saturday morning--the first time after spinning at high speed and the second time when he had to evade a GT vehicle that was standing sideways in the Mulsanne corner. Benoit Treluyer, who suffered from a severe cold, spun once at the entrance to the pit lane.

The third-placed Audi R18 Ultra, meanwhile, lost a lap right at the beginning of the race due to a check of the rear suspension. On late Sunday morning, a gear got stuck twice which the driver was able to correct each time by switching the ignition on and off. 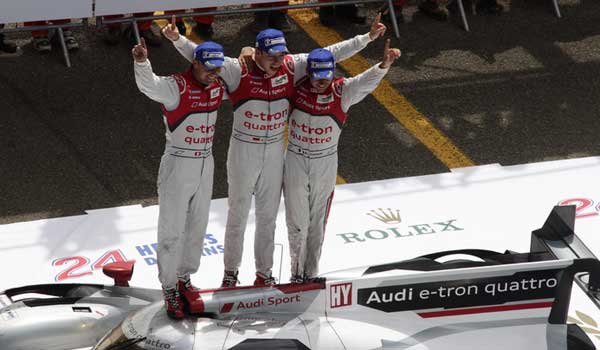 CAMPI members release sales figures for month of May
View other articles about:
Recommended Videos
Read the Story →
This article originally appeared on Topgear.com. Minor edits have been made by the TopGear.com.ph editors.
Share:
Retake this Poll
Quiz Results
Share:
Take this Quiz Again
TGP Rating:
/20