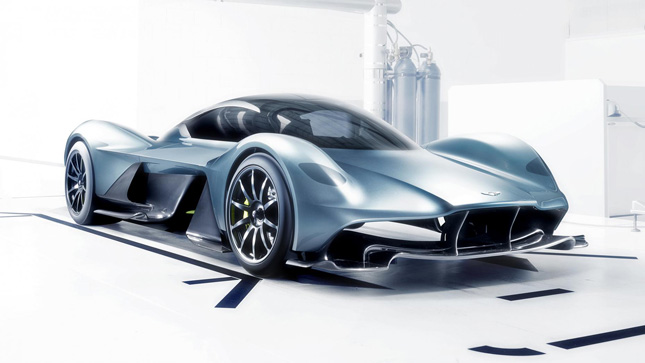 So now, at last, we can actually see (rather than imagine) what all the fuss is about. We’ve already known that Adrian Newey, don of Grand Prix car designers, is to execute his long-held dream of building a road car. A road car to put the hyper into high-performance.

To do it, he’s teamed up with Aston Martin. And here, rolling for the first time into the gaze of an astonished public, is the resulting machine. Welcome to the Aston Martin AM-RB 001. The name references its co-creators, Newey’s Red Bull Advanced Technologies.

In a previous interview with Newey and Aston design chief Marek Reichman, we listed, in tones of gobsmacked semi-disbelief, the aims they have for the car. That it will raise performance to a level well beyond last year’s trinity of McLaren P1, LaFerrari and Porsche 918.

Newey and Reichman said all along that it would only be possible because they were starting from a clean sheet of paper. They didn’t use an existing tub (the P1 is derived from the original 12C’s; the 918’s is a bit like the Carrera GT’s). There’s no shared engine or powertrain architecture. 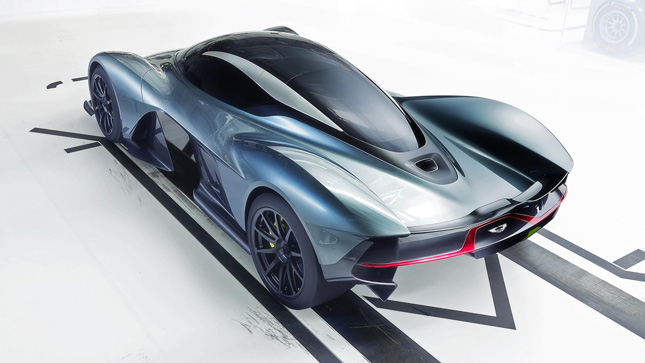 So we can see how the design draws downforce from immense underbody voids. You could set up camp under there. Inside, the driver and the passenger sit with knees and feet high, like a grand prix pilot. And behind them is a brand-new ultra-compact naturally aspirated V12. A V10 would have been too vibratory, according to Newey, hence the V12. Its exhaust exits upward behind the tiny teardrop cockpit canopy.

Newey is speaking calmly as usual, but we gasp when he says the power-to-weight ratio will be similar to an LMP1 car. More specifically, he adds, it will be about 1,000hp per ton, with weight being targeted at under 1,000kg. So we’re looking at around 1,000hp, then? Newey nods.

In fact, at this point Newey is still leaving himself some wriggle room as to the specs. He explains that designing the exact outline of that V12 will take a couple more months. He says he’ll use that time to do lots of virtual simulations of different configurations for the rest of the powertrain--the transmission and the possible hybrid system.

There will be no twin-clutch gearbox, that’s for certain. "The transmission is a key area of research," explains Newey. "The current DCTs are just monsters; they weigh 150+kg, and are tremendously bulky. The concept of the car is small and light. So we’re researching exactly how we’ll do the transmission. We’re homing in on a solution, but it’s going to be tricky." 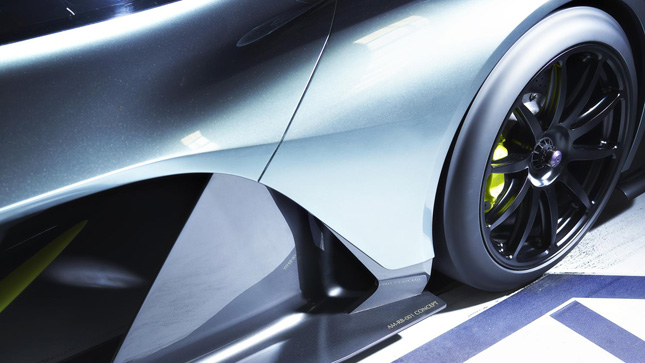 What about hybrid augmentation? "Clearly, hybrids offer a lot of opportunities," Newey admits. "But we’re researching those or whether we can do it purely mechanically."

Then he drops an intriguing nugget. "LMP1 cars have electrical power that lasts a short time and then fades away. The battery is not big enough to sustain discharge more than the initial part of the straight. They might have 1,200hp for initial acceleration, but might get to the end of the straight with 300hp or 400hp. If we have an electric contribution, it will be a much smaller percentage of the combustion-engine power, so the variation is less. I’d say we’ll be above the average power of an LMP1 car, but less than their peak."

The simulations are cracking on with suspension ideas, too. He hints it will have to be active. The reason is the colossal downforce at big speeds. A passive suspension able to resist those forces would enforce ultra-high spring rates. Then, at low speeds, the car would be excruciatingly jarring. So it needs to adapt. Possibly the aero, too, will be active. 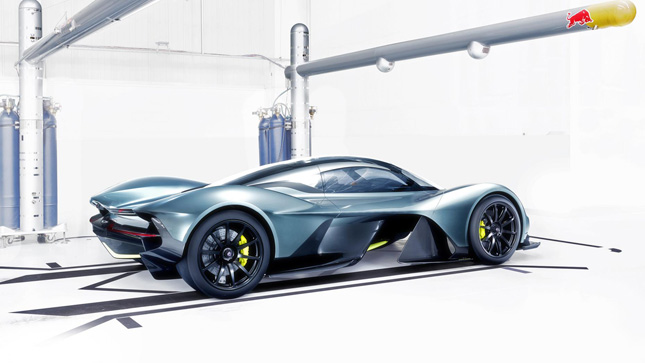 Also, he explains that the track version of the AM-RB 001 is the one that will match LMP1 lap times. Compared with the road version seen here, it will have bigger wings and diffusers, wider tires, and a stripped cabin. But the powertrain and fundamentals will be the same. "We don’t have time to do two cars," says Reichman.

Back in 2014, Newey designed a virtual car for PlayStation’s Gran Turismo, called the X2014. It used a fan to suck it down, but he says the AM-RB 001 can’t do that because it would scatter gravel over everyone else on the road. But he does say some of the aero themes in the new car are evolutions of that virtual racer.

Reichman also did a Gran Turismo car, called DP-100. This was the only mid-engined Aston of modern times, until the AM-RB 001. "The information you have to provide to PlayStation has to be accurate," he points out. "Because the feeling of driving virtually is getting more and more real." He adds the two virtual cars had some common ideas. Both men say working together now has been an easy meeting of minds. 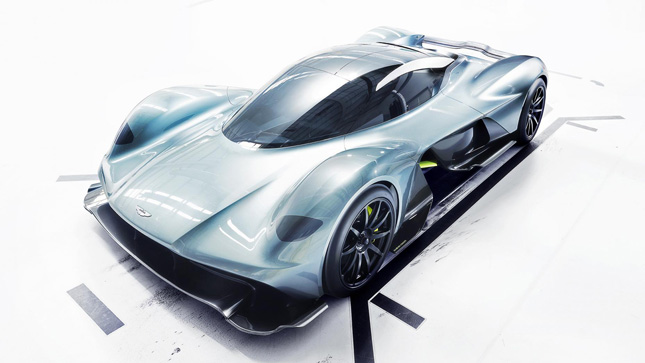 To get this dominant underfloor aero, the cockpit package has to be pretty wild. Reichman, well above 6ft himself, insists he can fit--while sitting alongside his more compact boss, CEO Andy Palmer. Well it’d be pretty daft to design a car like this then be unable to drive it.

The car will be comfortable. Newey says you could, if you want, go to the theater in it once in a while. Or even commute. It’s got driver aids--partly, he says, to make it easier on the track, but also because it will be used on unknown roads.

He is also very aware that the car must be friendly to drive. While he casually mentions that several current Formula 1 drivers have ordered it, he insists it must also be possible for normal drivers to enjoy the thing without getting intimidated. In fact, he puts enjoyment above sheer speed in his priorities. "We’re talking also about the driving experience, not just the statistics. How you are feeling in the car, taking pleasure in driving it, feeling involved in it." 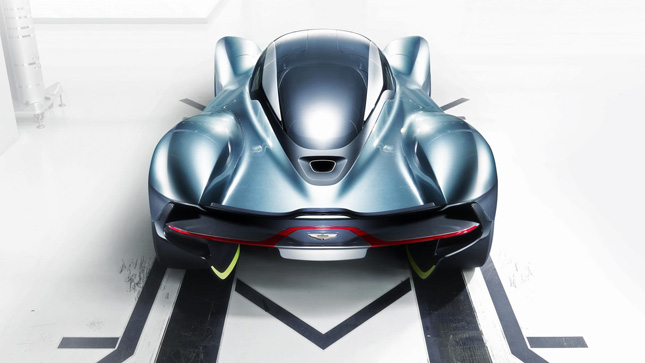 You’d want to use it a lot, too, if only to make yourself look good. It is stunningly beautiful. Reichman is loving the design process as it’s very different from doing a ‘normal’ Aston Martin. "You spend a lot of time drawing sketches that are impossibly low and wide. They couldn’t fit two adults. That’s what a designer wants. So when someone comes along and says, 'Could you make it even lower?'--you just go 'fantastic'. Nothing has been impossible. Reduction allows a designer freedom. This car is pure and simple. We both had the desire to make a beautiful, efficient object."

Actually, 99 beautiful, efficient objects. That’s the production run, plus the track versions. The production date is end of 2018, with prices between £2 million (P122.8 million) and £3 million (P184.3 million)--partly depending on how much driver training you have. And the order book is already filling fast.

So where, on a scale of one to speechless, does it leave you? 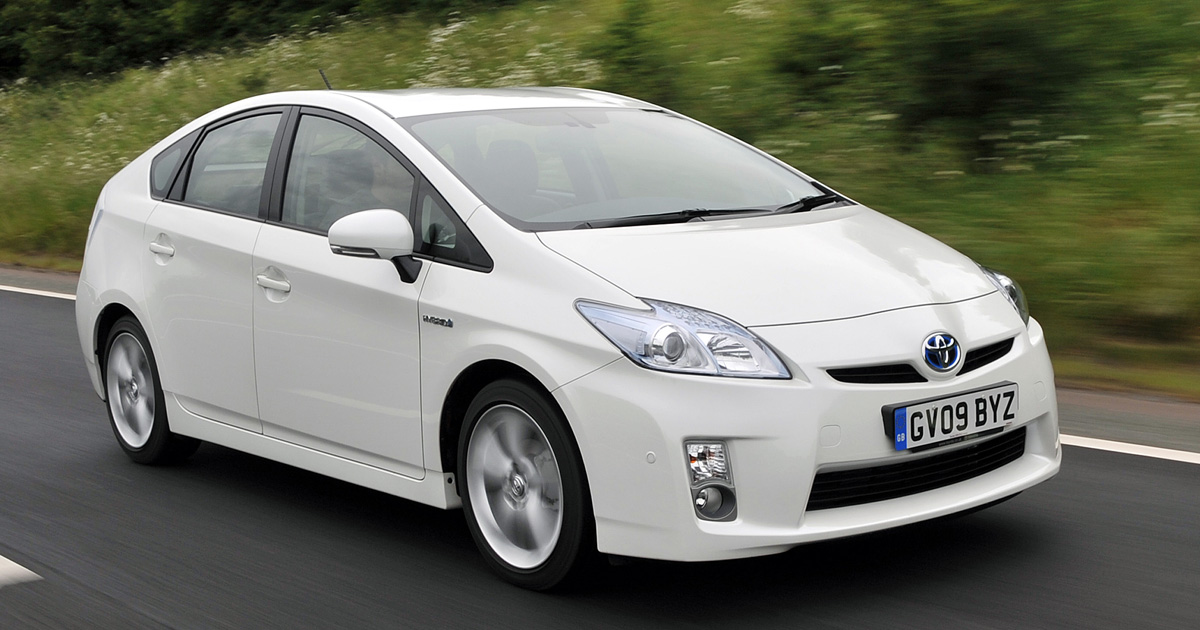 Toyota PH on recall: Only Prius and Lexus CT200h are affected in our market
View other articles about:
Recommended Videos
Read the Story →
This article originally appeared on Topgear.com. Minor edits have been made by the TopGear.com.ph editors.
Share:
Retake this Poll
Quiz Results
Share:
Take this Quiz Again
TGP Rating:
/20