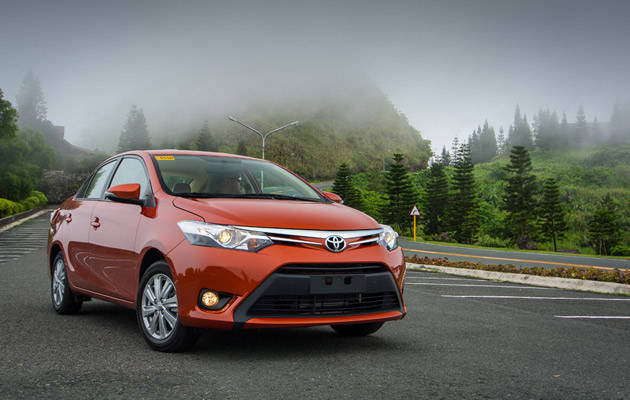 The Vios is Toyota's answer to the question, "Is there one car that can cater to the needs of the most number of people?" For proof, one need only look at the sales figures. In 2012, there were 16,517 Vios units sold in the country. That's more than Honda Cars Philippines' total sales for the same year.

Indeed, versatility is a big factor for the Vios's success. Over the years, it has become a college car for students, a first car for junior managers, a family car for young couples, and, most important to the bottom line, a dependable fleet car for taxi companies and sales organizations.

Since the first generation, the Vios has been victim to its own success. Its Toyota masters barely fiddled with the formula to the point that the generation change from first to second made even car guys like us look closely to see the difference. But that didn't stop Toyota's dealers from selling about 1,500 units on a good month.

The good news is that Toyota decided to increase the Vios's fun factor. Its tagline for the new model is "Start the Fun." Actually, it's more of a hashtag now (#startthefun).

First off, this latest iteration looks so much better than the model it replaces. The outgoing Vios was designed not to offend the most number of people. It never got people excited either. The new car has a large dramatic grille and sleek headlights connected to a prominent chrome grille. It's a purposeful stance that will draw attention on the road. Well, until the roads are full of Vios cars anyway.

But owners will still have the satisfaction of knowing they're behind the wheel of something stylish and in a cabin greatly improved from the previous generation. In the top-spec G variant, swaths of cream material and bits of chrome and shiny black plastic engulf the passengers. The black stuff is actually interesting in that it looks glossy, but it has a matte texture when you touch it.

The cabin is a lot roomier, too. The old Vios was a bit on the snug side, but now occupants don't necessarily have to feel bad that they can't afford an Altis.

When it comes to the power train, there's good news and bad news. The bad news is that the engines are unchanged. The 1.5-liter unit is still the 107hp 1NZ-FE mill that predates the very first Vios because it was the engine in the Echo Verso of the late '90s. The 1.3-liter motor is the same 85hp 2NZ-FE also from the previous-generation Vios. So, if you were happy with how the old Vios drove, you won't be disappointed with the new one.

The good news is that this means the new Vios should be as reliable and fuel-efficient as ever. And since there are so many of them on the road, they are easy to service. A mechanic who doesn't know his way around Vios engines and drivetrains shouldn't be called a mechanic. This also means parts should still be in abundance.

So here's the new Toyota Vios. It looks better, drives the same, and is still backed by Toyota's famous reliability and sturdiness. We wish it inherited a little more oomph from the exciting cars in the Japanese carmaker's stable. But for the rest of the population, this is still the no-brainer choice.

We already reported the price list last month, but for the benefit of those who missed it, here it is again:

Now, watch our exclusive video below, then view our equally exclusive photo gallery.

McLaren to feature \'ultimate model line\' at Goodwood Festival of Speed
View other articles about:
Recommended Videos
Read the Story →
This article originally appeared on Topgear.com. Minor edits have been made by the TopGear.com.ph editors.
Share:
Retake this Poll
Quiz Results
Share:
Take this Quiz Again
TGP Rating:
/20