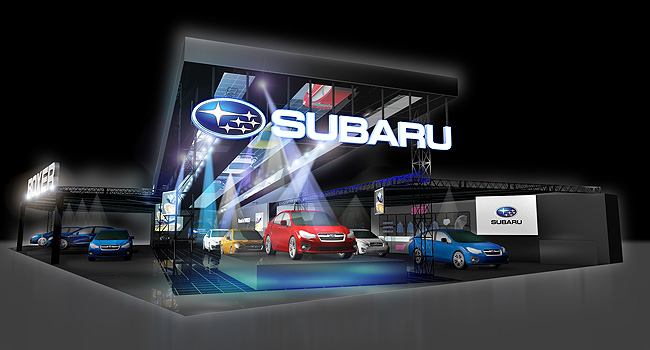 The 2015 Tokyo Auto Salon will be held from January 9 to 11 at the Makuhari Messe in the Chiba prefecture of Japan. As it so happens, Subaru will have a display at the annual event, and the carmaker has revealed the three design concept models it will put on display at the show.

The first is the Legacy B4 Blizten Concept, which inherits the distinctive design concept of the previous Legacy Blitzen series. Clad in "Premium Red," which is supposedly the iconic exterior color of the Blitzen series, it has a wide and low front silhouette and a rear spoiler. Inside, it has piano-black finishes with red contrast stitching on the beige-colored leather materials.

The second concept is the  "Sunrise Yellow" XV Sport Concept, which has a lower ride height and is equipped with a yellow striped spoiler. Serving as contrasts to the exterior are the black-colored grille and wheels. Its black interior has yellow contrast stitches similar in hue to the body color.

Lastly, the third model is the Levorg S Concept, which is equipped with Subaru Tecnica International-tuned parts that include intake and exhaust parts, a six-speed manual transmission, and a 2.0-liter horizontally opposed direct-injection turbo DIT engine. Subaru also claims that by using STI’s unique flexible parts like the tower bar, the car’s chassis and body performance has been enhanced further, resulting in "superb ride quality, stability and exhilarating handling performance."

1st production-unit Shelby GT350 Mustang to be auctioned off
View other articles about:
Recommended Videos
Read the Story →
This article originally appeared on Topgear.com. Minor edits have been made by the TopGear.com.ph editors.
Share:
Retake this Poll
Quiz Results
Share:
Take this Quiz Again
TGP Rating:
/20