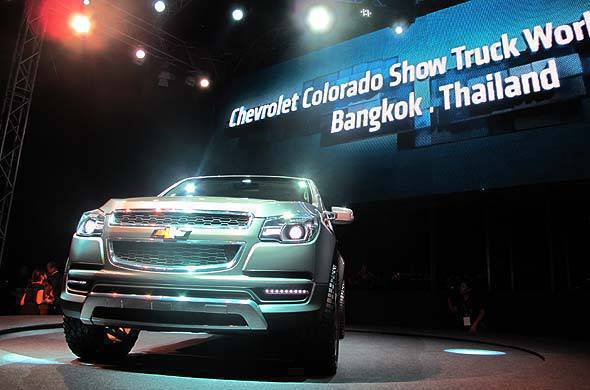 Bangkok, Thailand--After releasing a teaser photo of the next-generation Colorado,which showed only the pickup's dual-port grille sporting the brand's trademark bowtie,Chevrolet has unveiled the Colorado show truck here, where the American carmaker hopes to take a huge chunk of the local midsize-pickup market share--its first step toward dominating this segment everywhere else in the world.

"In order to win in this segment, we have to win here in Thailand," stressed Martin Apfel, president of GM Thailand, GM Southeast Asia Operations, and Chevrolet Sales Thailand, during the post-launch press conference, in reference to his earlier statement that the launch country is "the world's largest market for midsize pickups," and is thus "the perfect location in which to unveil our new Colorado."

"Although this is a show vehicle, the basic proportions and form convey the vision for the next-generation Colorado that we will bring to market," assures Brad Merkel, General Motors' global vehicle line executive. Naturally, this means the more flamboyant bits will be nixed from the version that will very soon be plying the roads in Thailand, so we can also forget about the ice-blue lighting and the three-dimensional gauges inside the show car.

As for propulsion and drive, the Colorado show truck is fitted with a 2.8-liter turbodiesel engine under the hood, with the grunt being transmitted via a manual gearbox to all four wheels. The executives present during the launch were very tight-lipped about potential power- and drivetrain specifications, but Apfel promised that more details will be made known when the production version is launched "within the year, definitely."

Photos from Chevrolet and by the author

Bangkok Motor Show preview: A peek at the Honda Brio
View other articles about:
Read the Story →
This article originally appeared on Topgear.com. Minor edits have been made by the TopGear.com.ph editors.
Share:
Retake this Poll
Quiz Results
Share:
Take this Quiz Again
TGP Rating:
/20