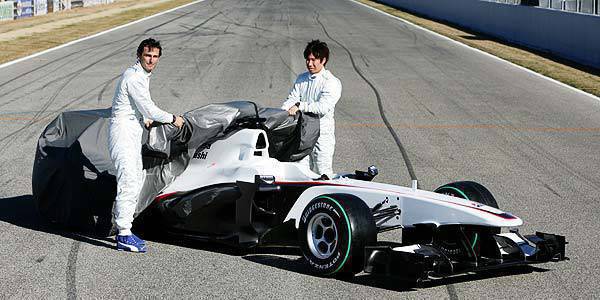 BMW Sauber F1 has unveiled the C29, the team's 2010 Formula One contender, which will be driven by Kamui Kobayashi and Pedro de la Rosa.

The BMW Sauber C29 will run with engines from Ferrari after BMW decided to quit the motorsport in July 2009. The team will continue to carry the BMW Sauber name as owner Peter Sauber has yet to file for a name change at the Fédération Internationale de l'Automobile.

Though the team's white-and-dark-blue livery clearly shows that it still has to attract a major sponsor, the car's design is very distinct from its competitors with its raised nosecone.

"The development of the BMW Sauber C29 has seen the team build on the experience gained last year and the improvement in performance over the final third of the season. However, the new regulations banning refueling during the race and stipulating a reduced width for the front tires have required significant changes to the car's design," said technical director Willy Rampf.

BMW Sauber F1 hopes to combine "youth and experience" with the all-new C29 for a successful campaign in 2010.

Kobayashi, 23, recorded his first championship points in 2009 with the Toyota team while de la Rosa has participated in 71 Grands Prix and was third and test driver for the Vodafone McLaren Mercedes team from 2005 to 2009.

"We have a long tradition of bringing together an up-and-coming youngster and an experienced campaigner as a driver combination--and it's an approach that has brought us a lot of success," team principal Sauber said. "Pedro has been working at the highest level technically for many years and for a top team, and we can benefit as a team from this experience. Young Kamui also has a lot to offer us, and last year he impressed me particularly in Abu Dhabi."

F1: Renault reveals 2010 race car
View other articles about:
Read the Story →
This article originally appeared on Topgear.com. Minor edits have been made by the TopGear.com.ph editors.
Share:
Retake this Poll
Quiz Results
Share:
Take this Quiz Again
TGP Rating:
/20