Where are their car prizes now?
by Tracy Carpena | Nov 13, 2014
CAR BRANDS IN THIS ARTICLE 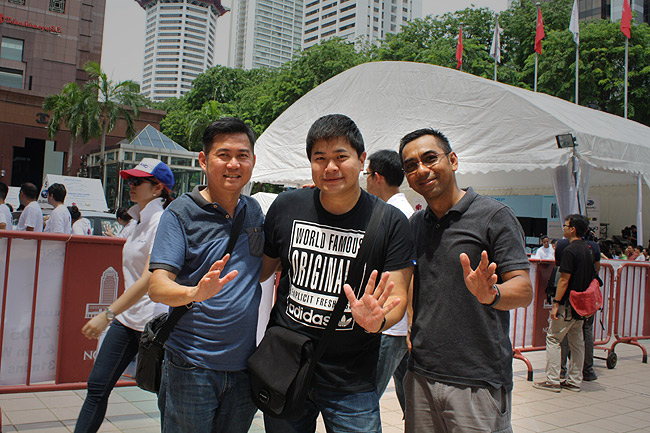 For three years now, Singaporean Chong Kait Chi has been going to Ngee Ann City in Singapore to watch the kick-off of the Subaru Palm Challenge. But he's not just a regular local who happens to be on Orchard Road, where the 13-year-old contest takes place annually. In 2011, he outlasted 400 participants of the endurance challenge and was declared the winner.

Just like Chong, other past winners take time to watch the Subaru Palm Challenge regional final yearly. This year, we bumped into Kevin Lee, who participated in the competition in 2006 and 2007. The "Battle of the Sexes" element was introduced that year, and Kevin emerged the male winner, having his palm on the car's decal for 73 hours and 55 minutes. The first-ever winner of the competition, Mohamad Amat, was also at Ngee Ann City last week. The winner of the 2002 contest, Mohamad held on to the car for 61 hours and 55 minutes.

Asked why they come and watch the event yearly, Kevin and Mohamad explained that they were supporting their friends who were competing. They did come back in the next couple of days to cheer on their friends who remained in the competition.

So what happened to their car prizes? Well, they did not keep their free Subarus. Kevin won an Impreza in 2007. He sold it and now drives a Volkswagen Polo GTi instead. Mohamad also won an Impreza, which cost SGD60,000 (roughly P2.1 million today). "I traded in my prize, and got a Forester instead," Mohamad told TopGear.com.ph. "It's a pretty good car."

Lexus to present LF-C2 Concept at 2014 Los Angeles Auto Show
View other articles about:
Read the Story →
This article originally appeared on Topgear.com. Minor edits have been made by the TopGear.com.ph editors.
Share:
Retake this Poll
Quiz Results
Share:
Take this Quiz Again
TGP Rating:
/20