Is the Sultan of Brunei selling his supercar collection?

Think you can afford one of his cars?
Aug 11, 2011
CAR BRANDS IN THIS ARTICLE 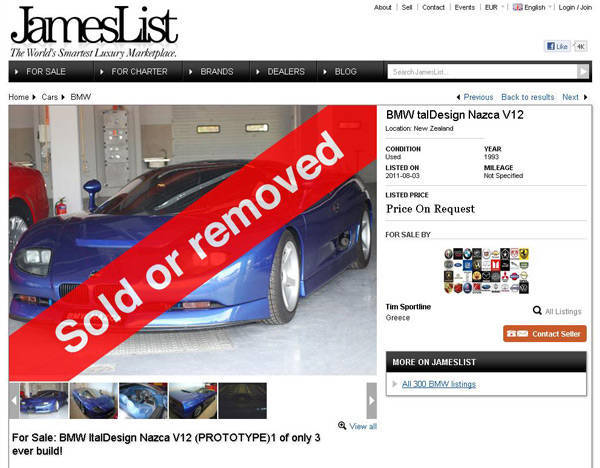 Could the Sultan of Brunei actually be selling his supercar collection after all these years? That seems to be the case based on a listing posted in JamesList.com.

Though JamesList.com dealer Tim Sportline has listed the cars' current location as New Zealand, when it was first posted a few days ago, all 21 cars were listed as being located in Brunei.

As further proof that the cars might indeed be from the person who was once the world's richest man, many of the cars only have the delivery mileage on their odometers, which means they were never used after they were delivered to the customers. Not only that; quite a few of the cars are limited-edition models. Take, for example, the 1995 Lamborghini Diablo SE 30th Anniversary of which only 150 units were reportedly made, with only 12 units available as a right-hand-drive model, including the one on the list.

The most irrefutable evidence, however, that the cars could indeed be from Sultan Hassanal Bolkiah is that two of the cars on the list are the rarest of their kind: a Cizeta Moroder V16T, of which only seven were made with only three as right-hand-drive models like the one listed, and the ItalDesign Nazca M12, of which only three were ever produced.

If the cars are indeed the Sultan's, this wouldn’t be the first time he sold a car as a right-hand-drive Ferrari F50 that was also listed on JamesList.com last August 2010 was reportedly his as well.

Curiously, all 21 cars were listed as still being available earlier today and yet just a few hours later, all have been listed as either "sold or removed". Incidentally, the cars on JamesList.com are listed also on the same one-stop shop website that specializes on luxury cars and supercars that we reported last November 2010, FerrariCollectionforSale.com.

Another day, another Toyota Camry teaser
View other articles about:
Read the Story →
This article originally appeared on Topgear.com. Minor edits have been made by the TopGear.com.ph editors.
Share:
Retake this Poll
Quiz Results
Share:
Take this Quiz Again
TGP Rating:
/20