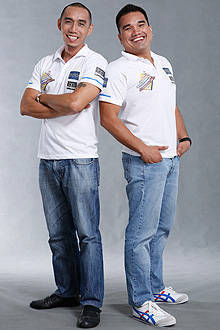 The pair from Cagayan de Oro won the 10-day challenge by accumulating 3,126 out of the possible 4,140 points. They beat second-place participants and best friends Paul Jake Castillo and Jan Señerpida by 87 points, making the latter settle for the P100,000 first-runner-up prize.

In third place were pals Francis Lim and Joaquin Puyat who will split the P50,000 second-runner-up prize, while couple Jon Hall and Maria Persson finished fourth to take home P10,000 worth of Jollibee gift certificates. As a special prize, the members of the second-, third- and fourth-placed teams also received a Samsung Galaxy Note each.

Driving their 1.6-liter Ford Fiesta Sport Plus hatchback, all 10 teams covered as many of the 171 Jollibee drive-thru stores as they could while performing various tasks and challenges. These included working as Jollibee crew members, manning the drive-thru window during the graveyard shift, and serving the customers.

The challenge also brought the teams to the Philippines’ most scenic sights--from the cobblestone streets of Vigan in Ilocos Sur to Magellan's Cross in Cebu. The teams also built model houses for Gawad Kalinga in Iligan, and for completing the task, P30,000 was donated to the victims of natural calamities.

"Apart from showcasing our widest network of 171 drive-thru stores nationwide, the Jollibee Drive-Thru Cross-Country Challenge also highlighted our fast and reliable service that is made even better by our 'alagang Pinoy' attitude," said Jollibee vice president and national business channels head Manjie Yap.

Has Yulon acquired the rights to distribute Volkswagen in PH?
View other articles about:
Read the Story →
This article originally appeared on Topgear.com. Minor edits have been made by the TopGear.com.ph editors.
Share:
Retake this Poll
Quiz Results
Share:
Take this Quiz Again
TGP Rating:
/20