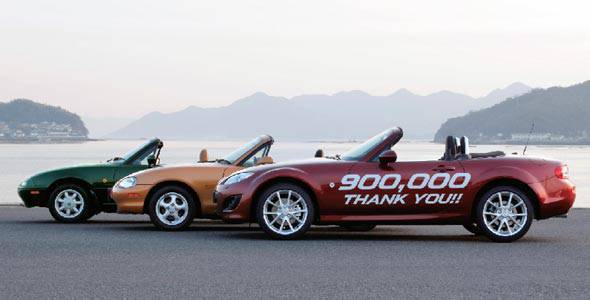 The Guinness World Records will have to rewrite its entry on the Mazda MX-5 as the world's best selling two-seat sports car for a third time as the nameplate has just set another milestone by producing the 900,000th unit.

"As we head toward the next production milestone of one million units, Mazda is committed to further evolving the MX-5," said Seita Kanai, Mazda's senior managing executive officer in charge of development. "We will refine its fun-to-drive character and further enhance its environmental and safety capabilities. As Mazda passes its 91st birthday, we are turning our sights toward our 100th anniversary. In the years ahead, we will continue to cherish the MX-5, alongside its loyal fan base, as the symbol of the Mazda brand."

The 900,000th unit is headed for Germany and it is a Cooper Red soft-top, six-speed manual-equipped MX-5.