MIAS 2011: Where are Chery's electric vehicles? 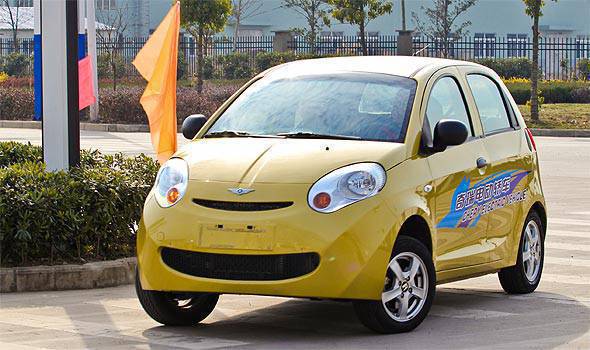 The 7th Manila International Auto Show (MIAS) floor is now bustling with activities as car companies try to get the attention of thousands of visitors at the World Trade Center. There is, however, a noticeable void at Chery's display area with two empty platforms that are obviously for cars.

If you read our primer on the nine cars that will rev up your MIAS visit, you'd know that Chery Motors Philippines is scheduled to show off its electric vehicles starting today. One is the Chery M1 EV show car and the Chery QQ3 EV, which is supposed to be available for test drives.

Chery's plans for the MIAS hit a snag, however, as both cars were still stuck at the port in Manila when the auto show opened this morning. At around 5:30pm, when almost all the launches were over at the MIAS, Tribdino was still at the Bureau of Customs to finalize the release of the Cherry EVs.

"The documents from China came in a little late," Tribdino said in an interview. He added that the Customs have new requirements for the Chery M1 EV, a show car which has technically no commercial value.

The Chery executive said, however, that the vehicles are almost out of the ports and will soon be headed to the World Trade Center but they won't be able to put the cars in place until 10pm when all the visitors are already out of the building. So if you want to see the Chery M1 EV or you want to take the QQ3 EV for a spin, visit the MIAS again tomorrow.

MIAS 2011: Check out the latest cars in the Philippines
View other articles about:
Read the Story →
This article originally appeared on Topgear.com. Minor edits have been made by the TopGear.com.ph editors.
Share:
Retake this Poll
Quiz Results
Share:
Take this Quiz Again
TGP Rating:
/20