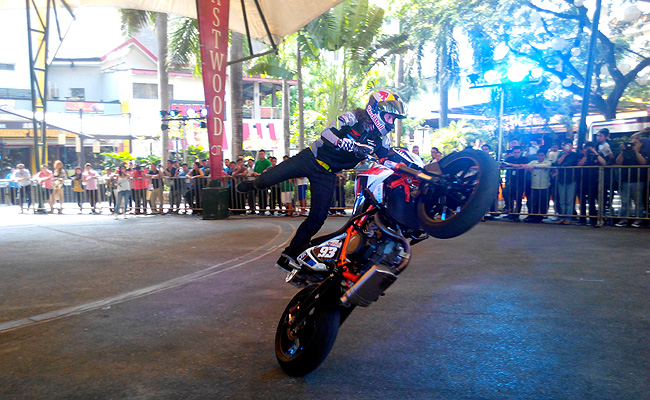 A couple of weeks ago, we reported that Red Bull-sponsored extreme athlete and motorcycle freestyle stunt rider Aaron Colton  would be in the Philippines to give us a sample of his riding skills. Well, he has been here since May 5 apparently, and he'll be demonstrating for the public this week the skills that made him famous.

Using his KTM 690 Duke, Colton will perform freestyle stunts that include lots of wheelies, endos, burnouts, drifts, and acrobatics.

According to Colton, he has visited the Philippines before and spent a few days in Boracay. During his previous visit, he was amazed at the number of motorcycles on the streets and has since looked forward to showing off his skills to the locals.

Colton's stunt exhibition will be held in the following venues beginning at 8pm:

According to our source from within the public relations company handling Colton's tour, a press conference and exhibition was supposed to be held in Cebu City but was canceled.

As to why Colton has been here since last week, he is apparently doing promotional video shoots for Red Bull, showcasing his stunts in places like Tondo and Baclaran.

Colton has good advice for local riders who want to follow in his tire tracks: "Always wear the proper protection. I've been lucky enough to not be seriously injured in the 10 years I've been riding professionally. Besides luck, I can only credit it to the gear I use. And practice riding in a place where you won't endanger yourself or others."

So, you know where to stalk Colton this week.

We meet the Jaguar F-Type Coupe during its Southeast Asian launch
View other articles about:
Read the Story →
This article originally appeared on Topgear.com. Minor edits have been made by the TopGear.com.ph editors.
Share:
Retake this Poll
Quiz Results
Share:
Take this Quiz Again
TGP Rating:
/20