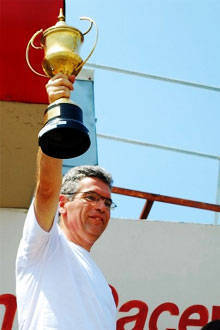 Kookie Ramirez, an influential character in Philippine motorsports, succumbed to bladder cancer this morning. He was 52.

As a son of the country's motorsports legend Pocholo Ramirez, who also died of cancer, Kookie was fortunate to have the proverbial foot inside the door to Philippine racing. Though he won a number of races in the Philippine Touring Car Championship, Ramirez never had the opportunity to lift the driver’s championship trophy in the many years he competed in the series as he often finished behind Jody Coseteng almost every season.

Still, Ramirez made a number of significant contributions to the local motorsports scene, which includes:

- the founding of the Run What You Brung series in 1996 that gave many amateur and wannabe race car drivers the opportunity to drive their cars around a race track in a time-attack format minus the need to possess a racing license;
- the establishment of the "Kookie Ramirez High Performance Racing School," one of the only two racing schools in the country to be accredited by the Automobile Association of the Philippines; and
- representing the Philippines in international races in 1981: the Shah Alam Grand Prix and the Malaysian Grand Prix where he went up against former Top Gear host Tiff Needell (source: DriverDB.com).

Kookie is survived by his wife, Menchie, and children Andre, Stefan and Lorenzo.

Members of the Philippine automotive community have expressed sadness in Kookie's passing.

"AAP (Automotive Association Philippines) is saddened by the death of Kookie Ramirez, who was not only a well-known motorsports figure but also a close associate of the AAP in the governance of local motorsports," said AAP director and motorsports committee chairman Mandy Eduque. "While we will miss him, we are also happy that he is now past all suffering and that he is now reunited with his father, Pocholo."

The Porsche formula: Performance and efficiency
View other articles about:
Read the Story →
This article originally appeared on Topgear.com. Minor edits have been made by the TopGear.com.ph editors.
Share:
Retake this Poll
Quiz Results
Share:
Take this Quiz Again
TGP Rating:
/20