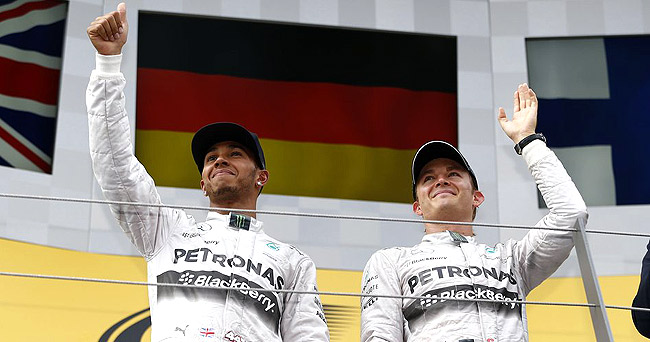 It's been over a decade since the last Formula 1 race in Austria, and the atmosphere was electric. The Red Bull Ring, formerly the A1 Ring, is fast and extremely challenging, with huge elevation changes and tricky braking zones. This is a track longtime fans love, and there was plenty of that love to go around for the rest of the field.

Valtteri Bottas was feeling a lot of love. Or maybe that was the champagne going down his throat. The Williams team has leap-frogged the competition by adapting a unique intercooler design similar to Mercedes, allowing them to slim down the car for better aerodynamics. This new car gave Bottas a blistering turn of speed in qualifying on Saturday, and he looked set for a pole lap right before he lost it under braking. During the race, he showed his true pace, outdoing teammate Felipe Massa and chasing down Nico Rosberg's Mercedes in the lead before finally falling victim to a hard-charging Lewis Hamilton in the other Merc late in the race. Still, few men have ever looked happier on the podium.

Definitely feeling the love was Massa. He qualified on pole on Saturday to thunderous applause from the fans as the Mercedes drivers and Massa's teammate all stumbled on their last laps in Q3. This superb performance earned him a hug from former Ferrari teammate Fernando Alonso. He didn't quite have the pace to win, as Bottas and the Mercs proved faster over race distance, relegating Massa to fourth.

Ferrari itself wasn't feeling the love. Alonso, who eked out fifth place through what seemed to be sheer willpower after qualifying fourth, publicly stated he preferred to "have no respect and to win more trophies." Kimi Raikkonen, in 10th, when told he needed to find an extra two-tenths per lap, told his engineer over the radio: "Give me more power then." Have we ever mentioned how much we love Kimi?

There was a lot of love in the Mercedes camp. While things were quiet at weigh-in after the race, the jubilant bro-bump Lewis gave teammate Nico as they jumped out of their cars at the end signaled that maybe things were getting a bit better. Rosberg lost some ground early on in the race to the Williams team, but the Mercedes duo proved to have much better race pace. This was most evident in the way Hamilton made his way from ninth to fifth within the first five corners of the race, on a blistering start.

Lewis was visibly faster than Rosberg, but due to difficulties passing Bottas between the second and third stints and some slow pit stops, he never got his chance at a challenge. After being told by his engineer, "It's hammer time," Nico responded with "Can't touch this," and pulled out just enough to keep him at bay. Still, Lewis was ecstatic to salvage that second place after a disastrous Q3 on Saturday saw him scupper both timed laps. And perhaps he's starting to look at his problems more maturely, admitting after the race that his pit issues might be due to improper positioning on his part. Could the boy wonder be growing up? We hope so.

The only other big news is how Sergio Perez's first stint on the harder "soft" tires granted him the lead for several laps after the first round of pit stops, during which he commendably guarded against eventual winner Rosberg. He finished sixth after overtaking. Teammate Nico Hulkenberg was not so lucky, losing eighth place to Red Bull's Daniel Ricciardo on the very last lap.

There was little love for the Red Bull squad on its "home" track. Both Toro Rosso cars retired with problems, which was a shame, considering rookie Daniil Kyvat's star turn in qualifying. Jean Eric Vergne's brakes going up in an explosion of dust showed just how brutal this short and fast track is on brakes. Main squad veteran Sebastian Vettel had numerous problems, prompting him to call in to the pits for technical support at one point, and he eventually retired to save the car. Daniel Ricciardo was the lone bright point for all the Renault-powered teams, but going from first in the last race to eighth isn't much fun for the rookie.

Next stop: Silverstone. Hamilton's home track, and the place where he'll be hoping to make his comeback. Mercedes is still expected to dominate, but the big question going forward is whether it will be Williams or Red Bull nipping at their heels.

All-new Ford Edge launched, now with EcoBoost engines as standard
View other articles about:
Read the Story →
This article originally appeared on Topgear.com. Minor edits have been made by the TopGear.com.ph editors.
Share:
Retake this Poll
Quiz Results
Share:
Take this Quiz Again
TGP Rating:
/20