Rest in peace, Nigel Stepney
May 7, 2014
CAR BRANDS IN THIS ARTICLE 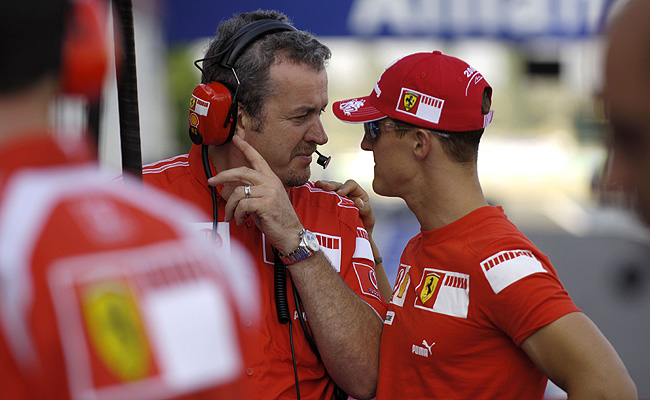 Nigel Stepney, Michael Schumacher's chief mechanic at Ferrari and one of the two central figures involved in Formula 1's 'Spygate' scandal, reportedly died in a car crash on May 2. He was 56.

According to AutoSport.com, Stepney, who was driving a Volkswagen van, had stopped "on the hard shoulder of the M20 Londonbound carriageway at Ashford" when another truck collided with his vehicle. Stepney reportedly died "at the scene."

Stepney's career in F1 began in 1977 as a mechanic for the now-defunct Shadow Racing. After stints at Lotus and Benetton, Stepney followed Schumacher, car designer Rory Byrne and technical director Ross Brawn to Scuderia Ferrari where he first served as chief mechanic before climbing up the corporate ladder to eventually head the performance development department.

In 2007, Ferrari conducted an internal investigation that eventually revealed that Stepney had passed confidential information--specifically, 780 pages of documents from the Italian team--to then McLaren engineer Mike Coughlan.

Following Stepney's dismissal from Ferrari, the FIA issued a statement on March 7, 2008, urging its licensees to "not professionally collaborate with Mr. Stepney without conducting appropriate due diligence regarding his suitability for involvement in international motorsports" until July 1, 2009. By February 6, 2009, though, the FIA had lifted the sanction on Stepney.

Hyundai to provide cars for ASEAN seminar, World Economic Forum
View other articles about:
Read the Story →
This article originally appeared on Topgear.com. Minor edits have been made by the TopGear.com.ph editors.
Share:
Retake this Poll
Quiz Results
Share:
Take this Quiz Again
TGP Rating:
/20