To be used on production vehicles by end of this year
Apr 14, 2014
CAR BRANDS IN THIS ARTICLE 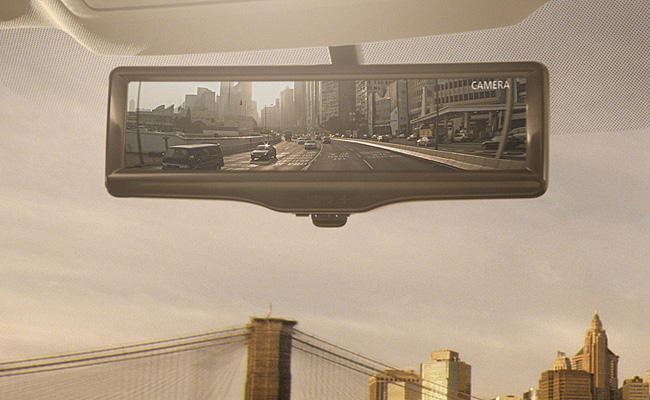 Nissan will unveil at the 2014 New York Auto Show its Smart Rearview Mirror, which is reportedly the "world's first LCD monitor that helps provide clear rearward visibility unimpeded by traditional obstacles such as cargo, tall passengers, inclement weather or the design of a vehicle."

According to Nissan, the Smart Rearview Mirror can provide a clear image in a variety of environmental conditions like rain, snow, dawn and dusk. In addition, the Japanese carmaker claims that the high-quality camera and the image-processing system in the LCD monitor consistently produce a clear image "with minimal glare, even during sunrise or sunset conditions, or when the vehicle is being followed by a vehicle with strong headlights."

"Smart Rearview Mirror will give our customers the best possible view no matter how tall the passengers in the backseat or how bad the road conditions," said Nissan executive vice president and chief planning officer Andy Palmer. "It also offers the possibility of new and exciting designs for our upcoming models, ensuring that appearance no longer has to be compromised for visibility and functionality. We'll have the flexibility to create new shapes and to further improve aerodynamics for better driving dynamics and fuel efficiency."

Nissan will introduce the Smart Rearview Mirror in its home market of Japan later this year before rolling it out to the global market "over the next few years."