Vote for the greatest Chevrolet car of all time

In celebration of the brand's 100th anniversary
Aug 4, 2011
CAR BRANDS IN THIS ARTICLE

Come November 3rd this year, Chevrolet is turning 100 years old. As you might expect, this calls for some grand centennial celebration. Part of the commemoration is an online gimmick that seeks to find out which Chevrolet car people think is the best in the American brand's history. You will find the official website here.

On the website, you will be asked to pick among 16 iconic Chevrolets--from the 1912 Chevrolet Six all the way down to the 2011 Chevrolet Volt--to determine which Chevy is the greatest ever. The voting process follows a knockout format. Think NCAA March Madness or Wimbledon Championships. The 16 cars are segregated into eight pairs in the first round, with the cars in each pair battling for your votes. The car that gets more votes in each pair advances to the second round, and so on and so forth.

As we post this, there are only four days remaining for the voting in the first round. Below is how the 16 Chevrolet cars have been paired: 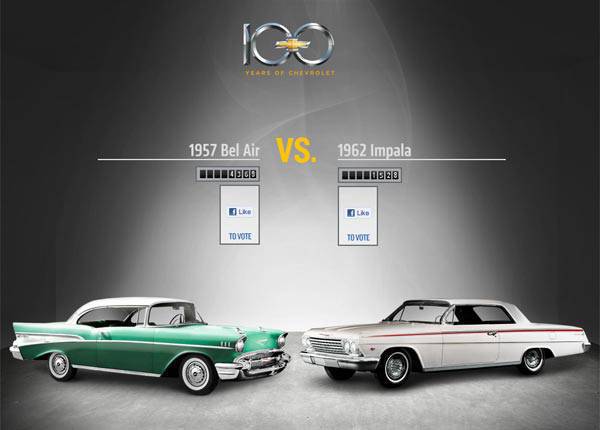 1957 Bel Air: "It became one of the most popular cars ever due to its unique blend of style, functionality and, of course, the option of Chevrolet's legendary small-block V8 engine. Power ranged from 140hp to 283hp, depending on the model. It included a wraparound windshield, a massive chrome bumper, twin wind splits that dressed up the hood and sporty rear fins just above the taillight."

1962 Impala: "As the drag-racing wars escalated, so did the competition. And that meant lighter cars and bigger engines. By 1962, Chevrolet had turned its heart-stopping Impala into a drag-strip legend, embodied by the Beach Boys' new hit single, '409'. The added muscle of the new 409 engine launched the Impala from 0 to 60mph in four and a half seconds and inspired battles of speed from coast to coast." 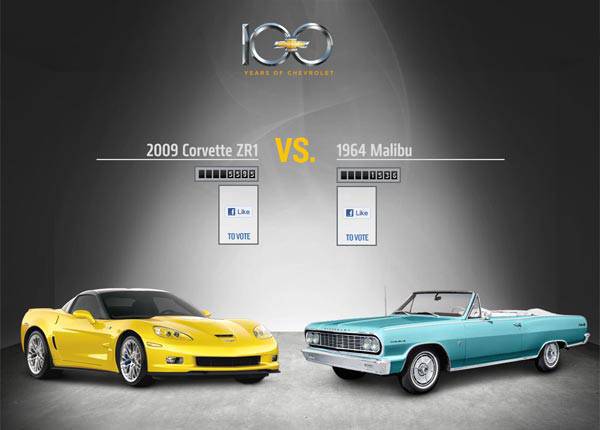 2009 Corvette ZR1: "In true Corvette fashion, the ZR1 was built to live up to its high-performance family name. And to prove it, this little speed demon won the 2010 Car And Driver Lightning Lap competition, beating out Lamborghini and Porsche. Not to be outshined by these Europeans, the new Centennial Special Edition of the ZR1 features a coating of Carbon Flash Metallic paint and a VIP treatment when you buy one."

1964 Malibu: "The Malibu began life as the top-of-the-line version of the Chevrolet Chevelle. It proved so popular, it quickly earned its own nameplate. Named for Malibu, California, the new frame was a perfectly proportioned design that seemed right from every angle. You could buy the crowd-pleasing Malibu almost any way you wanted it—convertible, hardtop, sedan or coupe. And its four-barrel carburetor, small-block V8 engine got a respectable 300hp rating." 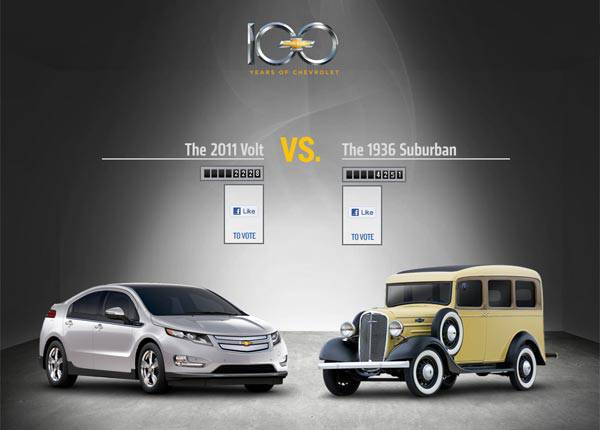 2011 Volt: "Simply put, the Volt is the future. It currently holds the title of the most fuel-efficient compact car in the United States. Plus, you can charge its battery at home for around $1.55 per day. In 2011 alone, the Volt won 2011 Motor Trend Car of the Year, Green Car Journal Car of the Year, Automobile Car of the Year and 2011 North American Car of the Year. This game-changer is already owned by NASCAR legend Jeff Gordon."

1936 Suburban: "In 1936, Chevrolet invented the Carryall, a utility vehicle for families. At the time, the most popular long-distance transportation was rail. But passengers arrived with loads of luggage and needed to continue their trip to the suburbs. For the first time, drivers could transport up to eight people comfortably. Priced at just $685, the 1936 Suburban launched an impressive 75-year career." 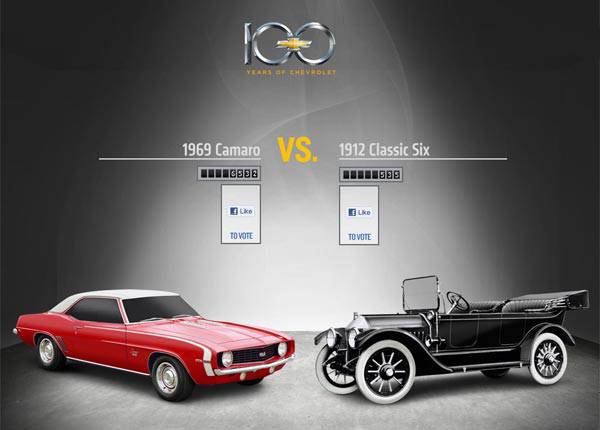 1969 Camaro: "By 1969, the Camaro was extremely popular. And though this was the final year of the Camaro's original iconic design, it went out with flying colors. The '69 Camaro paced the Indianapolis 500 for the second time. It was the first and only year the legendary aluminum ZL1 engine was offered, and the Z28 SS/RS performance package qualified the '69 Camaro to compete in the Trans-Am racing series."

1912 Classic Six: "Chevrolet's first car pulled onto the auto scene like a decked-out debutante. Race-car driver Louis Chevrolet imagined an upscale dream car based on the racing cars he loved. The first Chevy engine was a large, liquid-cooled, 299-cubic-inch, six-cylinder cast-iron block. In fact, it would remain Chevrolet's biggest engine until the late '50s. The Series C Classic Six had a T-head configuration, produced 40hp, and could go a whopping 65mph, competing with the high-performance cars of its time." 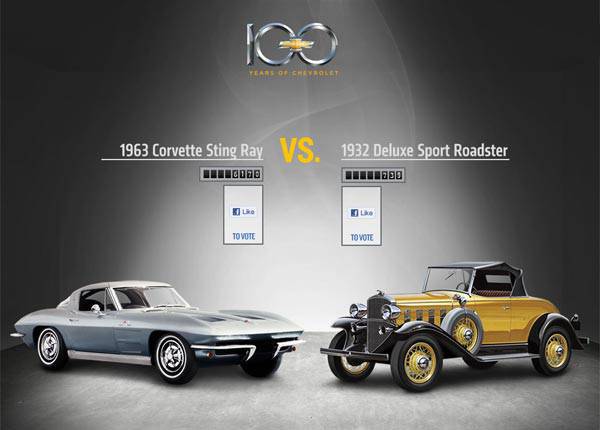 1963 Corvette Sting Ray: "Ten years after the first Corvette, Chevrolet turned the model on its head with the Sting Ray. This exciting, eye-catching design was the brainchild of legendary General Motors design chief Bill Mitchell. The colorful Mitchell had a new vision for the Corvette, led by his hobby of racing personal prototypes. Together with stylist Larry Shinoda and chief engineer Zora Arkus-Duntov, they built the new Sting Ray with an independent rear suspension. It was a first for any modern American car, on a par with more expensive European cars of the time."

1932 Deluxe Sport Roadster: "Styled with spirit and cuter than a button, the Deluxe Sport Roadster is considered by many to be one of the prettiest cars Chevy has ever made. It was also affordable--drivers got a lot of car for their money, which may have helped Chevy keep its No. 1 position in sales even as the Great Depression raged on. The Deluxe model sparkled as it drove by with chrome-plated hood vent doors. It also carried double spare tires, one mounted ever-so-stylishly in each front fender." 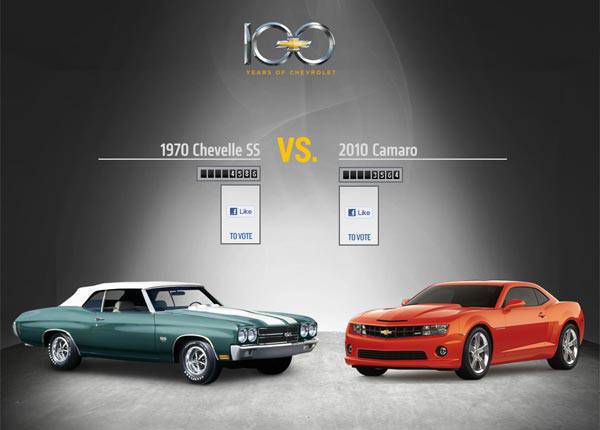 1970 Chevelle SS: "Funny what people considered a mom-and-pop car in the old days. Even today, this so-called family sedan is parked at the top of anyone's muscle-car list. The legend grew when GM temporarily lifted its displacement ban on midsize cars, and gave the Chevelle SS a barbaric 450hp V8 engine. No production car had ever sported a higher factory horsepower rating--the "rock crusher" four-speed transmission easily helped the SS reach 100mph in under 13 seconds."

2010 Camaro: "When Chevrolet launched its first Camaro commercial in the '60s, the car emerged out of a flaming, red-hot volcano. The launch of the 2010 Camaro was no less explosive, thanks to its stunningly futuristic yet retro design. The new look turned heads as a 2006 concept car and rocketed into the 2010 market as its nearly identical twin. It's no surprise this Camaro began its reign easily outselling the Ford Mustang." 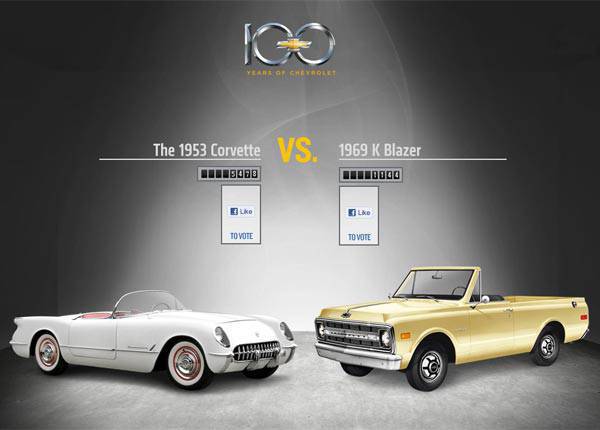 1953 Corvette: "Auto enthusiasts fell in love with the first Corvette at the famous Waldorf-Astoria Motorama in New York City on January 17, 1953. Although it was only supposed to be a show car, the public's overwhelming reaction inspired GM to put it into production. The first 15 cars were built by hand in the back of a customer delivery garage in Flint, Michigan. All 1953 Corvettes were Polo White with a red interior and a black canvas top, had removable plastic windows (as opposed to rolling them up and down) and black oilcloth bags for storage."

1969 K Blazer: "Ladies and gentlemen, the SUV that started the craze. More buckin' than the Bronco, this boulder-hopping landmark was only available as a 4x4 with fully removable tops. Yet it still had available luxuries such as air-conditioning, bucket seats and a newfangled Turbo Hydra-Matic automatic transmission. It was enough to make the Blazer's stripped-down peers--including the Scout and the Jeepster--look downright silly." 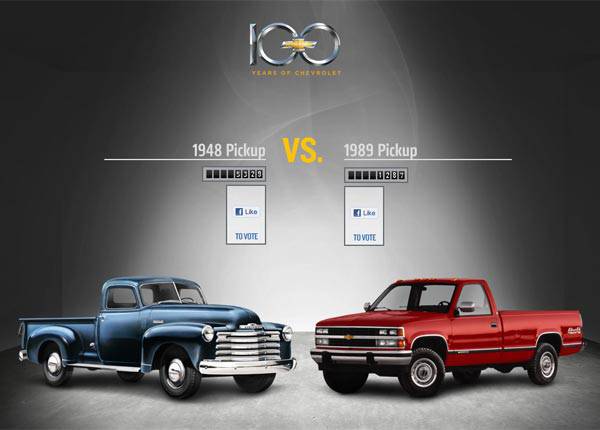 1948 Pickup: "As the boys came back from World War II, they were soon greeted with some familiar equipment. Chevy restyled its 'Vehicles of Victory' based on successful war designs and debuted these beauties to the general public. The cab sported 'Unisteel Battleship' construction, which was larger in every measure—larger doors, larger glass area and three-across bench seating."

1989 Pickup: "This was the fourth generation of the legendary bowtie pickup, and it didn't disappoint. By the late '80s, America was driving trucks not only to haul heavy loads, but also as a lifestyle and personal statement. It was cool to drive a truck. The new '89 pickup turned into a 10-plus-year build-o-rama for the pickup, featuring the Cheyenne, the Scottsdale and the Silverado, with trim and towing packages galore."

So, which of these do you think is the greatest car in the 100-year history of Chevrolet? Help settle the score by casting your votes at www.chevrolet.com/100-years.

Fame or shame: Why a Pinoy motorist is gaining online popularity
View other articles about:
Read the Story →
This article originally appeared on Topgear.com. Minor edits have been made by the TopGear.com.ph editors.
Share:
Retake this Poll
Quiz Results
Share:
Take this Quiz Again
TGP Rating:
/20