Will a V12 engine be shoehorned into the Aston Martin Cygnet?

Also known as the glorified Toyota iQ
by Niky Tamayo | Nov 28, 2012
CAR BRANDS IN THIS ARTICLE 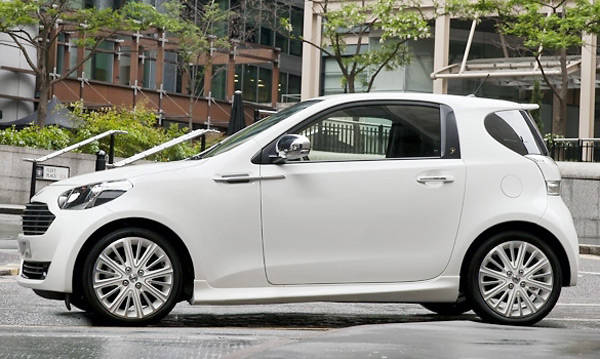 Certain news outlets have leaked the bizarre news that Aston Martin is mulling coming out with a V12 Cygnet. And they're adamant that, no, this is not an April Fool's Day prank left off a few months too late. Perhaps inspired by the Nissan GT-R-powered Juke R, this mentally ugly duckling will reportedly have a detuned version of Aston's mad 5.9-liter V12 engine. Unnamed sources say that the V12 will fit within the Cygnet's engine bay with minimal modification and that Aston could modify the rest of the car to cope with the power.

Now, that would be quite a feat. Consider, first, that the 510hp V12 is slightly under a meter in length without a transmission. The diminutive Cygnet, on the other hand, is just over 3m long with an engine bay barely big enough for a sewing machine. Perhaps the minimal modification those "sources" were talking about involves lopping six cylinders off the motor to make it fit.

Contrariwise, Aston Martin could put the engine behind the driver's back, ignoring the fact that there's still no place to put a gearbox back there. The only way we see this happening, really, is if Aston Martin extends the Cygnet’s snout, but that won't be to everyone's tastes.

More intriguingly, more sober sources have confirmed that the 420hp V8 from the Aston Martin Vantage will fit within the Cygnet's engine bay. The radiators won’t, however, and a custom gearbox and differential will be needed for the installation, but it remains an intriguing possibility. Whatever form it takes, expect Aston's rumored black swan to cost over half a million dollars. At those prices, we’re pretty sure they can find at least a dozen buyers deranged enough to put money down on one.

If you buy a Chevrolet Sonic now, you'll get a free iPad Mini
View other articles about:
Read the Story →
This article originally appeared on Topgear.com. Minor edits have been made by the TopGear.com.ph editors.
Share:
Retake this Poll
Quiz Results
Share:
Take this Quiz Again
TGP Rating:
/20