Toyota FJ Cruiser: The truck that just doesn't give a damn

Let me count the ways I like it
by Andy Leuterio | Apr 23, 2014
CAR BRANDS IN THIS ARTICLE 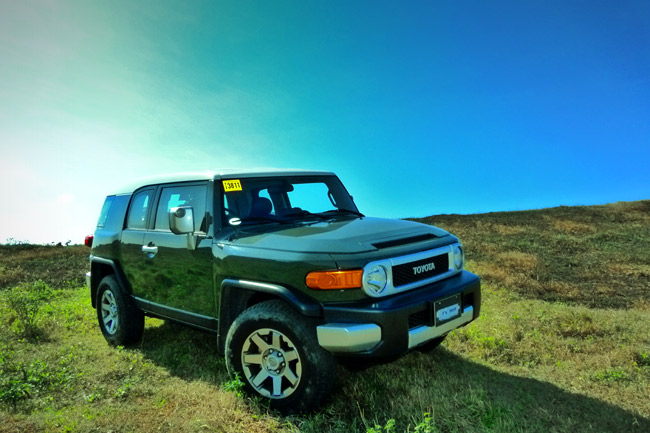 A little over a year ago, I became infatuated for the first time with a Toyota. The 86 was, and still is, a sexy little thing that's a joy to drive and relatively friendly on the pocket. It would be a nice addition to any man's stable, something to use as a stylish daily driver and backroad toy. But popularity has its downside, and the novelty of seeing one has waned, especially for someone as jaded as I am.

Perhaps sensing my growing indifference, Toyota sent a truck my way. Maybe they figured out that trucks are more my thing these days, and lo and behold, I am still pining for an FJ Cruiser. The spiritual ancestor to the ugly-as-a-box Land Cruiser 40 Series is going out of production before the year's end, and to my mind that makes it even more desirable. Even though the FJ Cruiser is selling in respectable numbers lately, it will never be as commonplace as a Fortuner.

For several days, I took the FJ with me to points near, far and sometimes off the Google Maps, too. I took it to the grocery, where I learned that it attracts lustful stares from MPV-driving moms. I took it to my training venues, loading the back with coolers, bikes, wheels, bags and soggy swimming gear. I drove around the village with my kid, who loved its military look so much he kept babbling it was a Hummer (in a way, it is that for the Japan Self-Defense Force). I took it to Subic and back, where I kept the thirsty V6 in check with a tame right foot for a rather tepid 6.5km/L.

And of course, I went trail-hunting where there were no shotgun-wielding guards but just a few docile cows to witness me driving up and over mounds, traversing ramps, and whooping at the sheer competence of the FJ. I'm no 4x4 expert, but the FJ's abilities make short work of obstacles that any other SUV in its price range would balk at. It's the kind of truck that makes you want to go exploring, just because you can.

So what exactly did I like so much about this truck? Let me count the ways:

1. Powertrain. The 4.0-liter V6 won't win any hypermiling awards, but if you value power over fuel miserliness, it never disappoints. The 260hp engine provides burly acceleration off the line, and the six-speed automatic transmission is well matched. The 72L fuel tank still gives you good range, too, so long as you don't use it as a city car. The built-in A-TRAC system provides individual braking of wheels in rock-crawling exercises, and it also has a lockable rear differential. 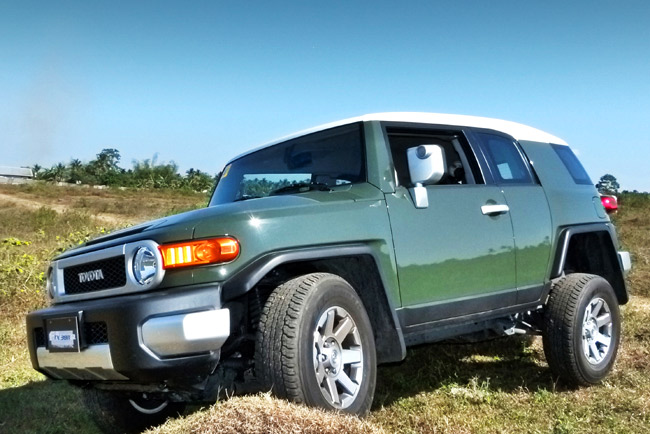 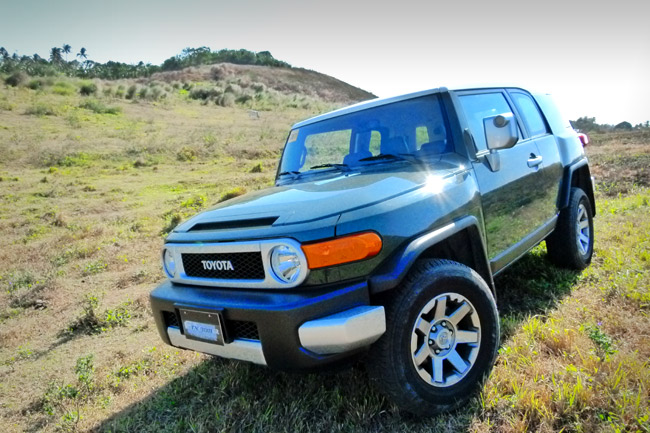 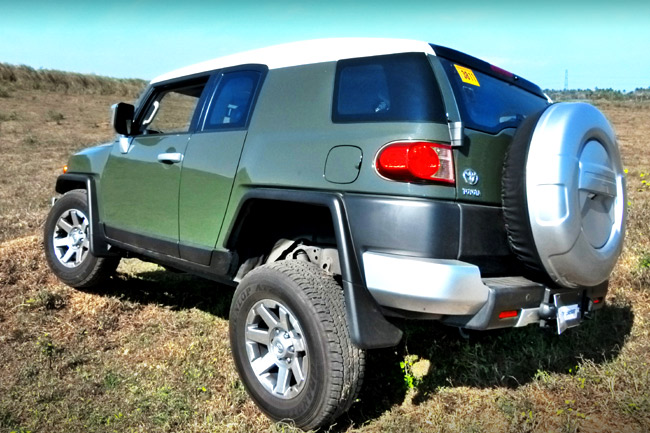 3. Suspension quality. The FJ's long travel suspension makes it wallow in turns like a boat, but overall ride quality is actually comfortable enough to lull passengers to sleep. Suspension travel is eight inches in front and nine at the back. That, coupled with excellent articulation, makes even a bone-stock FJ a very competent off-roader. Set aside a small fortune for proper off-road modifications and you've got yourself one badass rockhopper. 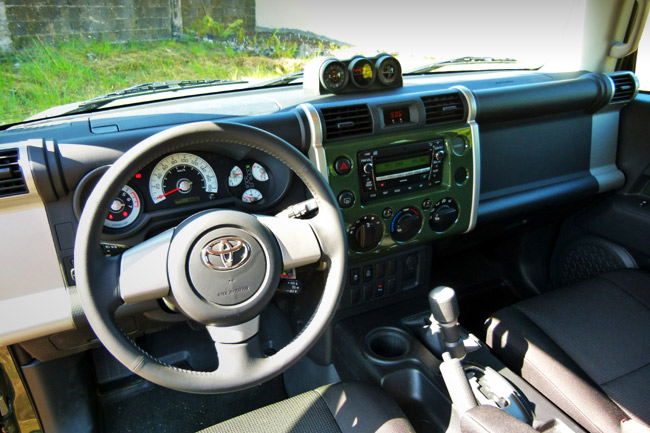 4. Functionality. The FJ cabin's right angles, big dials, and hard-plastic surfaces are a function-over-form thing, much like in a Jeep Wrangler. You can work every dial, button and lever in the cockpit even while wearing thick gloves. The box-like cargo area has minimal intrusions to free up as much usable space, and the surfaces are easy to clean. The view out from the driver's seat makes you feel like you're looking out from a bunker, but overall vision has minimal blind spots except to your left-rear quadrant. A backing-up monitor eases the hassle of reverse parking. The pod atop the dash contains a compass, inclinometer and external temperature gauge. In any other SUV the tacked-on look would be cheesy, but in the FJ it's a good match. There's a small compartment above the instrument panel big enough for small items like maps, multi-tools and possibly handguns. Be prepared! 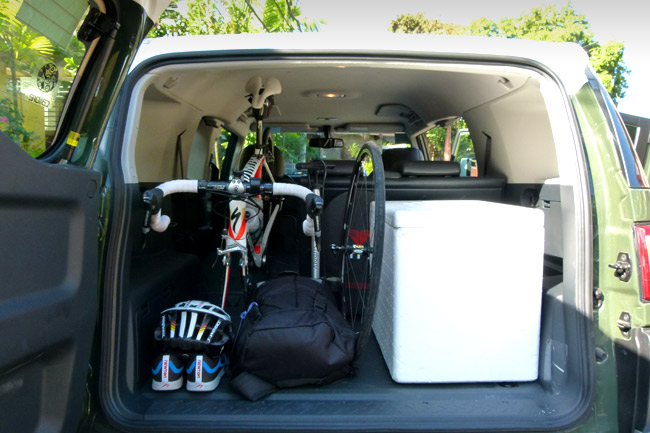 5. Extended bumpers. Big deal, right? Yes, if you're the type to sit on them while getting your gear in order on a trailhead, or need to mount accessories on the front.

6. Chassis. The traditional body-on-frame design (shared with the Prado) is built for abuse, yet it's solid enough that there's remarkably little flex or "judder" over high-frequency bumps to sicken passengers. Converts can sing the benefits of modern monocoque engineering to high heavens, but I'm old-school. I like to have real steel underneath me.

7. That look. Everybody wants a Hummer, but it's not a very practical truck. It's a pain to park, needs its own gas station, and makes even the nicest guy behind the wheel look like a pork-barrel fiend. The FJ Cruiser is a sort of anime take on the military-truck theme. It still looks badass, only friendlier (if you could call it that). Get it in Baghdad Beige and you'll look like a Gulf War vet. Get it in VietCong Green and you'll be at home in the boonies. Basic Black gets you the Spec Ops look. Heaven for military buffs everywhere. 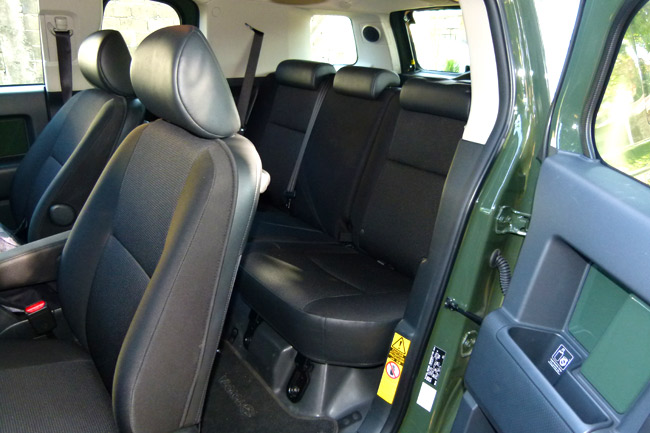 That said, there are some things about the FJ that will be of minor concern for those who'd like to have "everything," namely:

1. Basic stereo head unit. It lacks a USB port, which is a bummer if you're used to plugging in your iPod.

2. No fog lamps. I know, I know...you're supposed to put real, hardcore aftermarket lamps on something like this, but it's just a bit strange to miss these basic items. See those lights on the side mirrors? They're just marker lights for added style and visibility.

3. That engine sound. The FJ has got to have possibly the most unflattering exhaust note in the country today for a six-cylinder engine. It's not industrial-metallic-annoying like a four-banger diesel, nor mellifluous like a V8. Not even silky like a small-displacement V6. Instead, the 4.0-liter just drones as you rev it harder. Baby the throttle and it goes "hhnnnnhhh." Floor it to pass and it goes "hooooonnnnnn!" (To be fair, it's still smoother than any diesel.)

4. Suicide doors. They're not for everyone. Kids think they're cool; grown-ups realize it's a pain to have to open the front door to access the backseat. 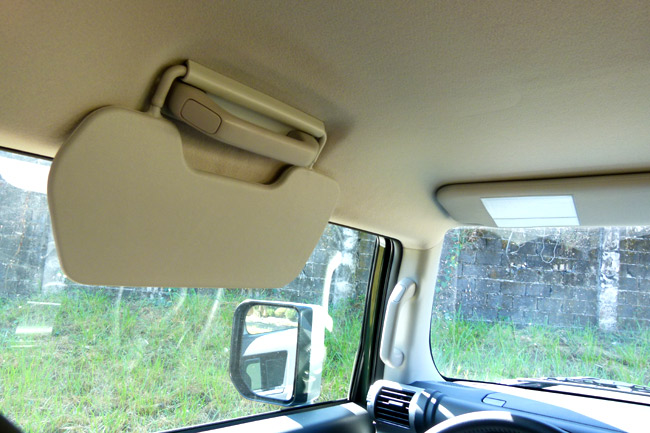 At just a shade below P1.8 million off the showroom floor, the FJ Cruiser is a lot of serious truck for the buck. It's not something you'd use as a daily driver, but I can't think of any other SUV in this price range that could really do so well both on- and off-road.

A reader asks: Should I get the Hyundai Elantra or the Mazda 3?
View other articles about:
Read the Story →
This article originally appeared on Topgear.com. Minor edits have been made by the TopGear.com.ph editors.
Share:
Retake this Poll
Quiz Results
Share:
Take this Quiz Again
TGP Rating:
/20