It really is no surprise the Montero Sport is selling so well in the Philippines
by Dinzo Tabamo | Oct 22, 2009
CAR MODELS IN THIS ARTICLE 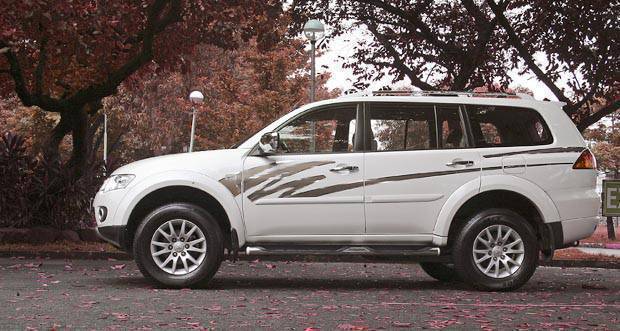 The street in front of our office building used to be a pothole landmine. It looked more like the surface of the moon than Pioneer street. As soon as you get out of the parking garage, you had to navigate your way around the craters unless you wanted to subject your car to molar-rattling shocks. It was even more disheartening to think that this was where my taxes went.

This kind of road condition proves that an SUV is still the best kind of vehicle to traverse our streets. Of course there are also pickups, but SUVs still beat them in comfort hands down.

In the past SUVs were expensive propositions. You had to have a macho bank account to be able to afford a Mitsubishi Pajero or a Toyota Land Cruiser, and let's not get started on how much money you needed for a Range Rover. Today the Mitsubishi and Toyota rivalry continues but with different weapons; the Toyota Fortuner and the Mitsubishi Montero Sport.

The Fortuner was launched first, and it made the SUV (more) accessible to the middle class. When Mitsubishi released the Montero Sport last year it was a runaway success. The combination of attractive pricing and looks made it a popular buy. And this was backed up by Mitsubishi's impressive rally and off-road credentials.

Seeing the Montero Sport in the metal is already a strong argument to purchase one. The design is handsome, the continuation of the roof's slope that made the Montero Sport an SUV is a more balanced design in contrast to the Strada with which it shares its platform.

The Montero Sport's stance conveys a rugged confidence that, for the most part, it can live up to. The independent double wishbone suspension in the front, and rigid axle coil springs in the rear give the Montero a pliant ride that can take Manila road abuse. But those inside will be spared the brunt of the road's imperfections.

I didn't test the Montero off road, and I don't regret doing so because I'm also certain most owners won't. What I want to share is how fun it is to drive. The 163 horses aren't much to brag about, but the 343Nm of torque makes the city commute enjoyable. Overtaking the regular fare of 1.6-1.8-liter sedans is easy, and the tall driving position has the added pleasure seeing over the cars you overtake.

The interior is comfortable and littered with basic knobs and legible gauges. It's rather austere compared to its main rivals; those who want more refined and luxurious interiors will look to its arch rival, the Fortuner. But if you think about it, a simple interior isn't out of place in a utility vehicle. At least we know the Montero Sport isn't straying from its roots. It seats seven, but like most SUVs in its class the last row is better suited for cargo and luggage (after it is folded).

The Montero Sport is a fun SUV that has the versatility to be practical, with a price that won't break the bank, but we all know the reason it sells so well--our market loves a looker.

2009 Toyota Previa review
View other articles about:
Recommended Videos
Read the Story →
This article originally appeared on Topgear.com. Minor edits have been made by the TopGear.com.ph editors.
Share:
Retake this Poll
Quiz Results
Share:
Take this Quiz Again
TGP Rating:
/20