The Vios gets a TRD body kit. We find out if the pieces are all worth it
by Patrick Everett Tadeo | Jan 29, 2010
CAR BRANDS IN THIS ARTICLE 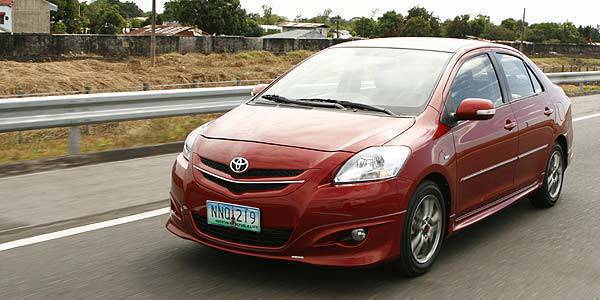 Much like how the AE90 and AE100 Corollas became ubiquitous around the metro in the 1990s, the Vios subcompact sedan has become a favorite of those who are looking to get their very first car.

But with the Vios being a favorite of the fleet-car market as well, the nameplate is often relegated as the second choice of new car buyers.

So, with the current-generation Toyota Vios now experiencing a midlife crisis Toyota Motor Philippines has decided to give the subcompact sedan an adrenalin boost by injecting it with vitamins T, R and D.

Short for Toyota Racing Development, TRD is the Japanese carmaker's in-house tuner responsible for improving the performance of Toyota, Lexus and Scion vehicles. But with the cost of Vios-specific TRD-branded items reaching close to P200,000 for three upgrades, one has to ask if they are really all worth it.

It's hard to deny that the aero kit turns the Toyota Vios from a ho-hum car to a flashy and attractive subcompact. First of all, the front skirt makes the Vios' bulbous nose look cute but aggressive--sort of like Pokemon's Pikachu when he gets really mad. The flip-ups at the corners even make it vaguely resemble the new Subaru Legacy. The side skirts help complement the look while the rear skirt completes the whole package nicely. Rounding out the kit are the TRD emblem on the boot and skirts, the ducktail spoiler and the muffler cutter.

Is all that worth P93,500? I don't think so. Sure, the aero components are made of high-grade polyurethane rubber, but in the end, it's purely superficial with probably no practical use unless you're blitzing down the SCTEX way above the posted speed limit.

Without a doubt, the gunmetal 15-inch alloy wheels look great. At P51,500, they're priced just about right. However, you do have to consider that, by simply adding around P20,000 more, you can get 17-inch ones with Bridgestone Potenza tires.

If there's one TRD item that's definitely worth the cash-out, it would be the suspension system. The stock suspension of the Toyota Vios feels a little soft when brand-new and a tad bouncy in the case of Vios taxi cabs that have seen too much abuse from their drivers. The TRD suspension system on the test unit I had over the weekend, however, is a revelation. There's hardly any body roll when taking a corner aggressively yet the ride isn't too stiff that tackling the metro's pock-marked streets would not leave you in need of a chiropractor later in the day. At just P49,500, not only is it the most affordable upgrade kit of the lot, it's also the most useful one.

The problem with the Vios-specific, TRD-branded items is this: add all three upgrades to any of the Vios 1.5-liter variants and you'll be pushing the car's total price to almost P1 million--making your TRD-spec'd Vios more expensive than the 1.6-liter Corolla Altis V variant that's just a notch below the range-topping 2-liter V variant. In effect, you'll be paying a lot more for a car that has more cosmetic touches than its bigger, compact car stablemate but has far less space to offer.

Toyota Philippines did a good job in offering the TRD suspension system to the Vios as it cures the model's most notable problem. The wheels do deserve to be mulled over if you're not the type who likes to fill fender gaps with a bigger wheel-and-tire combo. As for the aero kit, at almost P100,000, they're a little too hard to swallow. Besides, what good is it for if your engine is still stock? It's all flash and no go. The amount you'd spend for the TRD aero kit can get you a lot of go-faster bit at an aftermarket tuning shop. Just ask Ferman.

Nissan 370Z review
View other articles about:
Read the Story →
This article originally appeared on Topgear.com. Minor edits have been made by the TopGear.com.ph editors.
Share:
Retake this Poll
Quiz Results
Share:
Take this Quiz Again
TGP Rating:
/20