To anyone who’s done their 3-Series homework, the Touring wagon brings no surprises. The front half is pretty much identical, and that’s absolutely no bad thing.

Towards the rear, the designers have taken on the same mission as with the sedan—don’t just clone ’n’ shrink a 5-Series—but used a different technique. Where previous 3 Tourings took the window line and simply extended it level, here, the lower line of the glass angles upward behind the door. That makes, in effect, the biggest ever Hofmeister kink. It also gives the design some forward-aiming dynamism. Another easy spot: The main side crease no longer runs through the door handles. 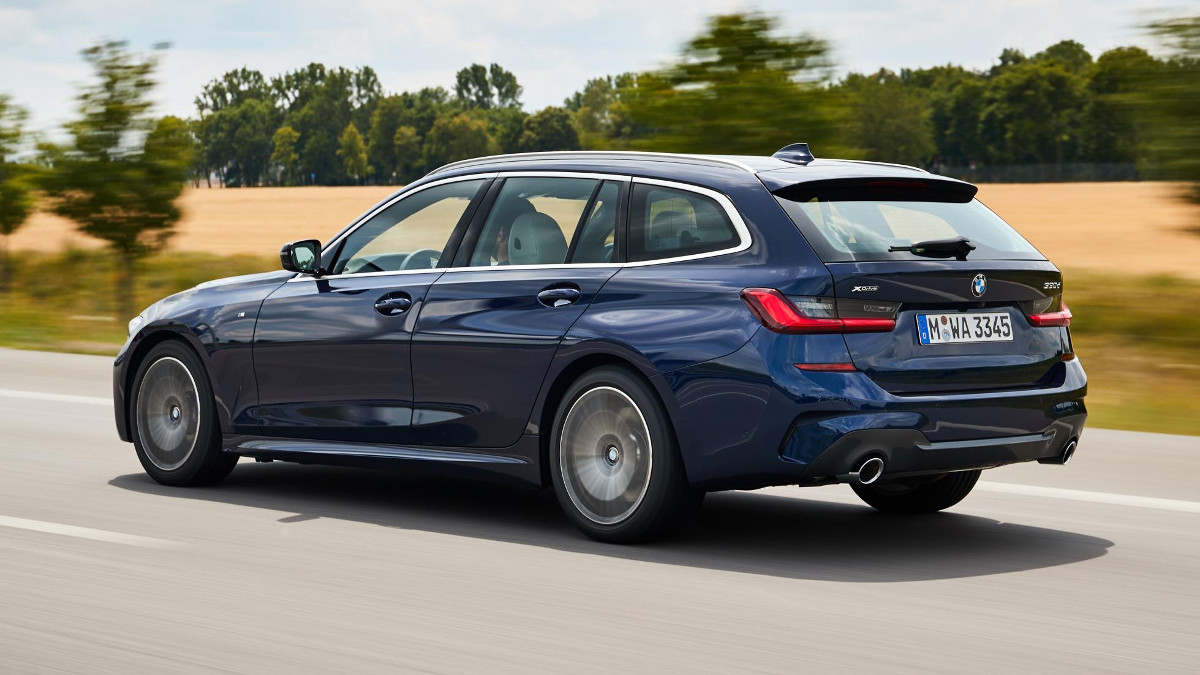 The Touring remains the same length as the contemporary sedan. As surely as the sun rises, they’ve grown. The added length is less than the length of a credit card, but it’s more about crash safety than interior space, which hasn’t seen much benefit.

That outline encloses 500 liters of rear cargo space, which is about par among the style-led premium wagons, but visibly less than, say, the Passat. Still, the 3-Series has some neat mechanisms to ensure your small but perfectly formed cargo is easily loaded and well restrained.

Underneath, the Touring’s—like the sedan’s—components are almost entirely renewed for this new G20 generation. The suspension principles, the seats, the electronics, and so on cascade down from the bigger cars BMW has launched in the past couple of years. The suspension and the drivetrain use more aluminum than before, and the hood and front wings are aluminum, too. Overall, it’s slightly lighter than the old Touring. 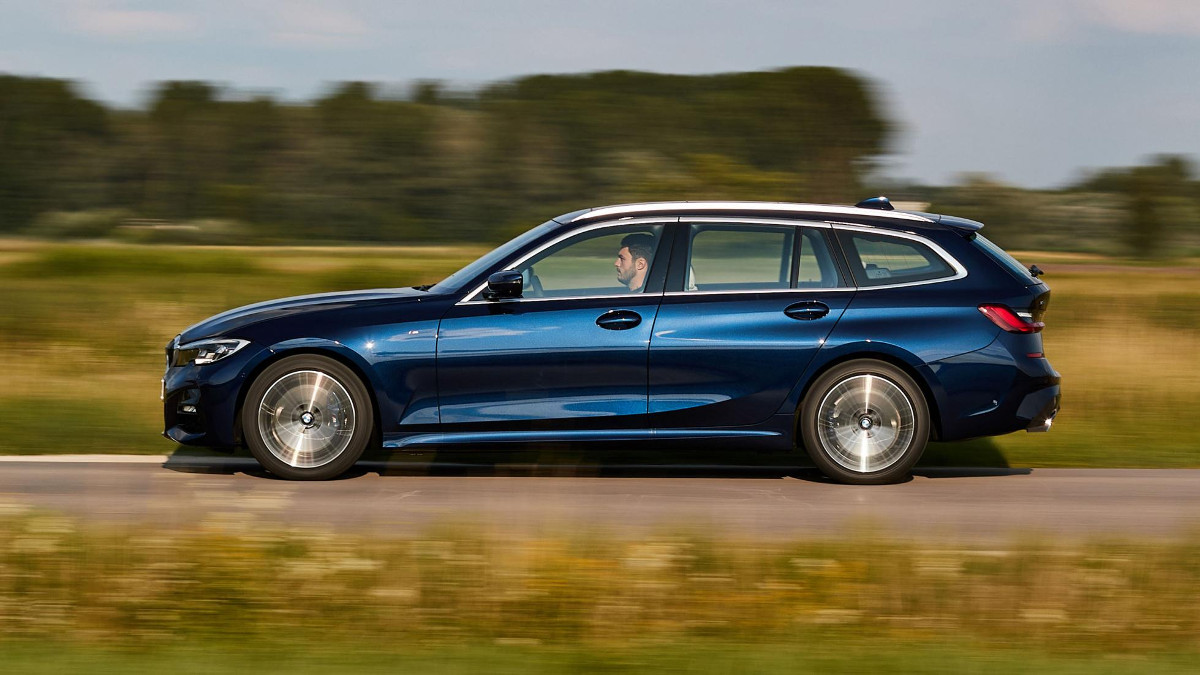 You’ll struggle to tell the difference between the Touring and the sedan. Which means the Touring drives wonderfully.

Our first exposure was in the 330d xDrive. The 330d is the cheapest of the six-cylinder engines; the 330i is a four-banger now. It’s an engine that emits a seriously industrial but smooth, distant rumble. And it goes really hard, slurring its way greedily though the auto ’box.

Rate of turn and roll are deliciously matched, so you peel it instinctively into a bend. But you have to allow for a bit of steering corruption over bumps. The xDrive system bestows traction that’s all but inexhaustible. Even so, stick it in Sport mode to send more torque to the back, and loosen the traction control to its mid setting, and a subtle sense of playfulness emerges. 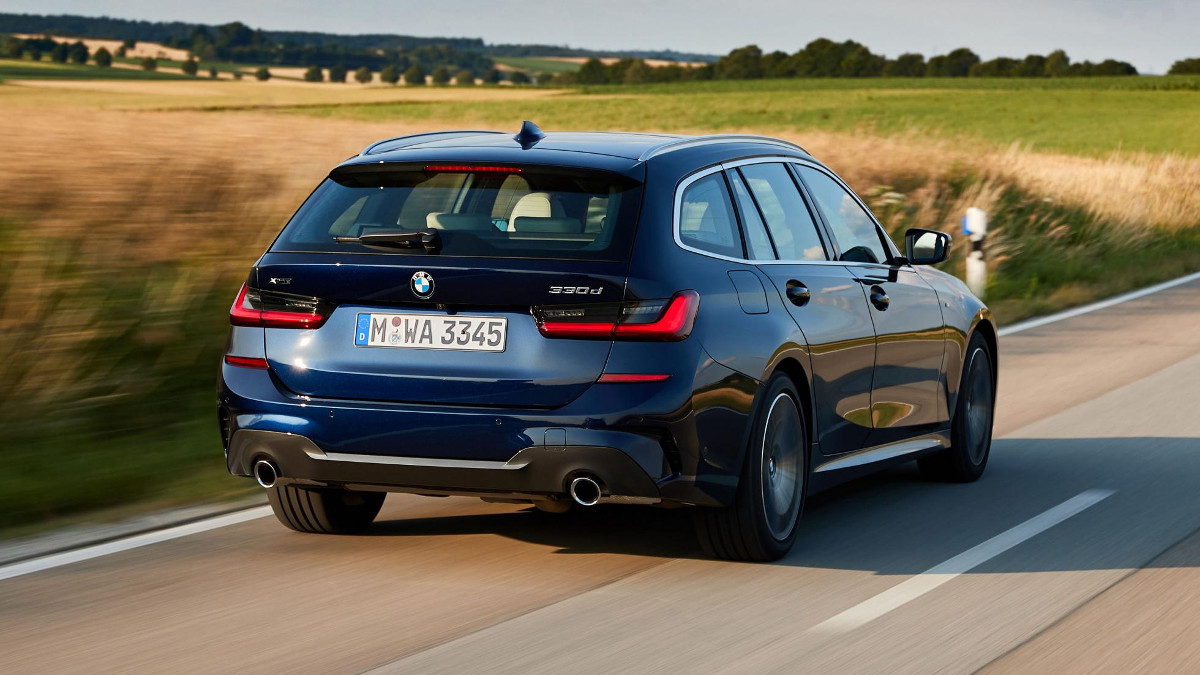 That said, the 330d xDrive is 170kg heavier than the rear-wheel-drive 330i gasoline variant. Experience from the sedan tells us that the gasoline’s revvier nature, and its lightness of foot, give it a joy the 4WD diesel lacks. A four-cylinder doesn’t have the glamour of BMW’s old sixes, but with turbo torque and fine sound insulation, this engine is absolutely no hardship to use. And 5.9sec to 100kph? Yes, please.

The 320d, the big seller, hasn’t been neglected. The decently quiet twin-turbo engine gives 0-100 in 7.1sec for the auto, or you can have a manual if you like to get involved. 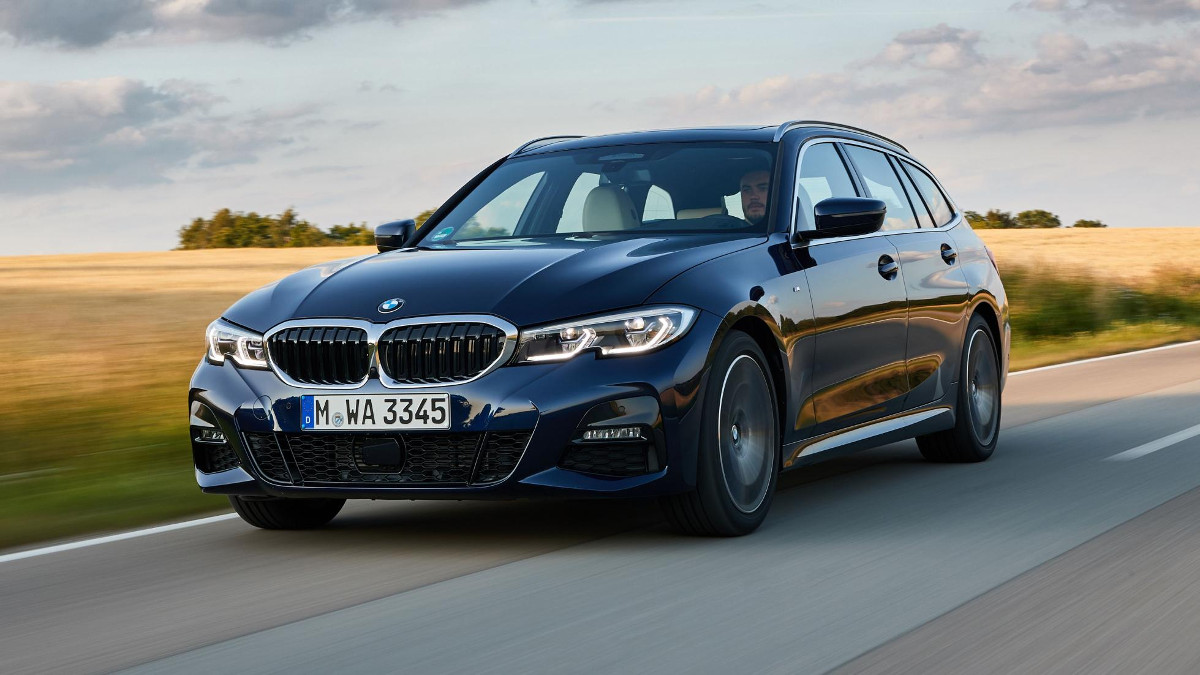 The ride is a little softer than the early-production sedans’ was. We said those first run of sedans were too harsh on some roads, and BMW reacted. (The sedans built after summer 2019 will have a softer calibration than before, too.) The Touring is still sporty, but acceptable now. The optional adaptive damping gives it extra bandwidth, but it’s not essential.

Still, as a long-distance car, the 3-Series does a lot to compensate for that ride. Quietness and refinement are first-rate, especially from the engine and wind noise. Motorway lane stability is fine, too. And the optional driver aids work unobtrusively. 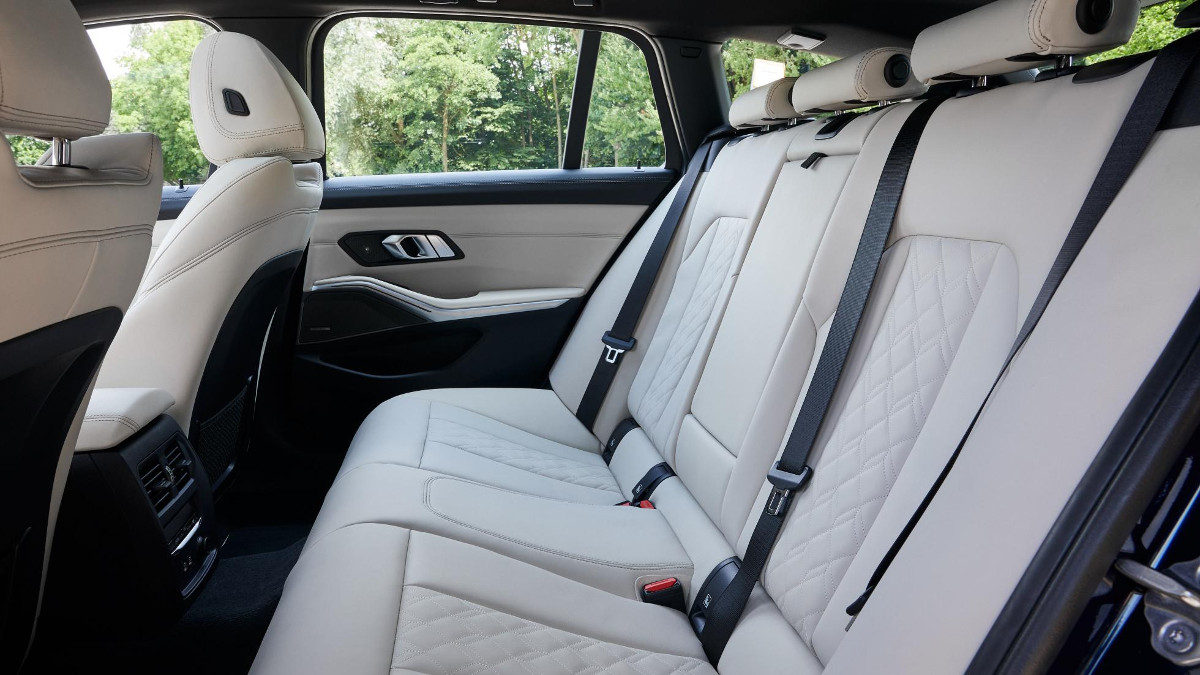 In front, there’s no way of knowing you’re in the Touring except by looking in the rear-view.

The new 3 is emphatically better-furnished than the old one, but it hasn’t moved ahead as fast as the best opposition. Still, the front seats and the driving position are terrific. Best of all, as rivals migrate to touchscreens and swipe pads, the good old iDrive rotary controller feels more and more like coming home. You can use it without looking down, even when the car is bouncing along. But a caressible screen is also an option. 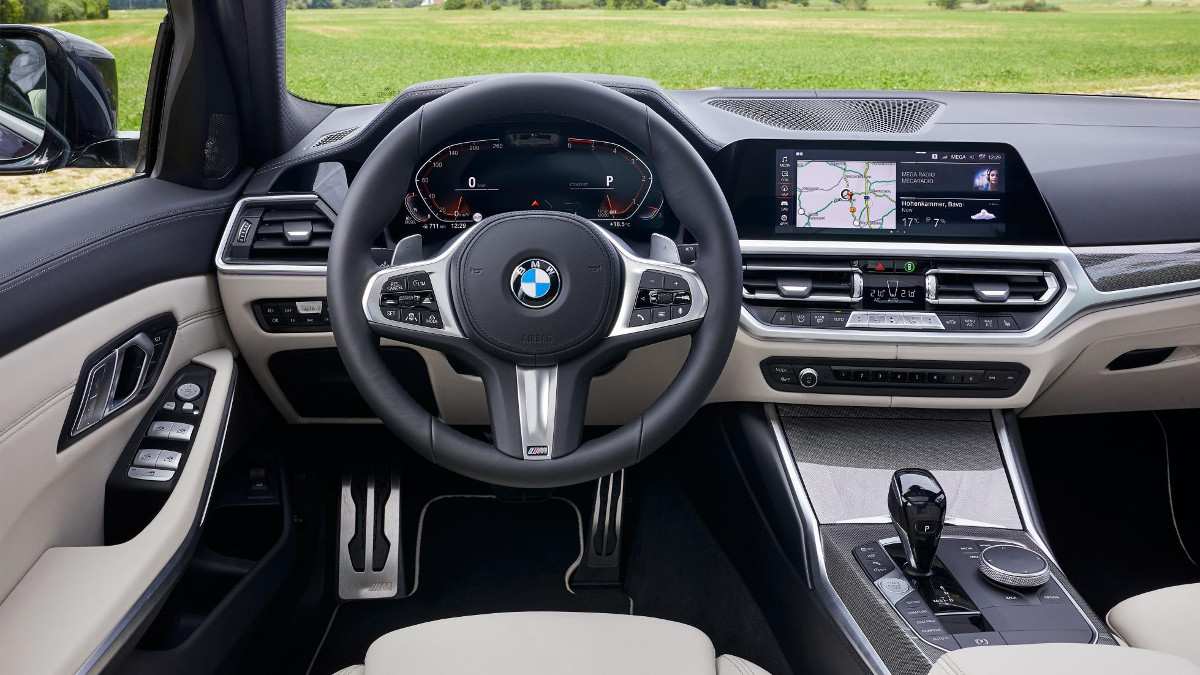 The new generation adds a bit more rear seat space, and the Touring’s long roof helps headroom. It even has three-abreast child seat mounts. But it isn’t minicab-sized, and the transmission tunnel impedes people sliding in and out to the opposite door.

Never mind the trunk’s size, it’s easy easy to use. The opening is slightly wider than it was. Under the floor is a compartment to neatly store the trunk blind and dog net. BMW’s usual separate-opening tailgate glass features, too. For chucking small stuff in, it’s so much handier than waiting for the electric full tailgate, and also means you can always add one teeny item to a full trunk without the rest bursting out. 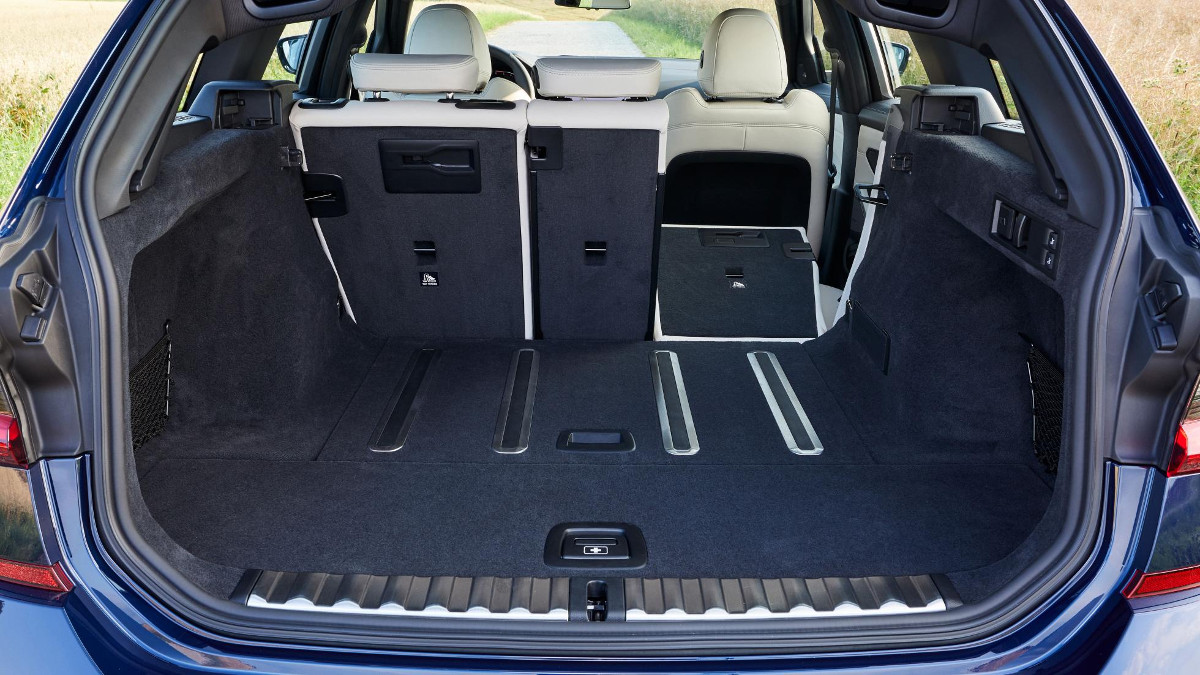 An optional storage pack includes a set of polished-metal front-to-back rails in the floor, with rubber inserts. Open the trunk and this rubber retracts below the level of the metal, so you can easily slide boxes in and out. Shut the door and the rubber stands slightly proud, to give a grippy surface. 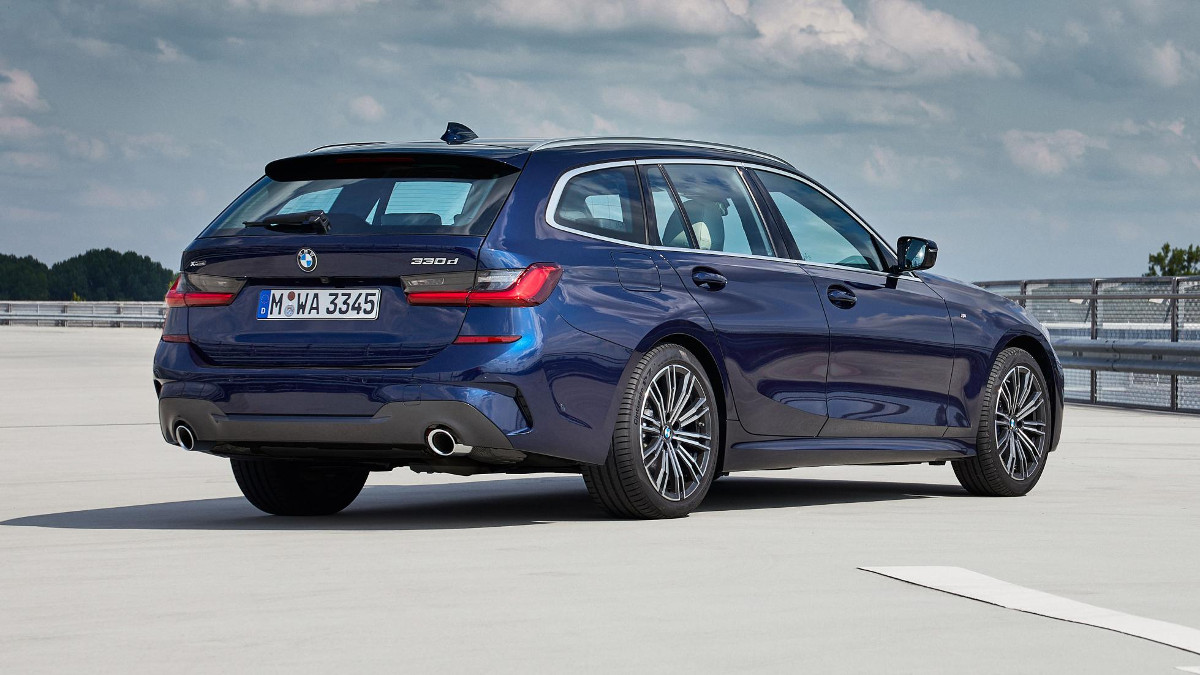 If you can’t find a 3-Series Touring to suit you, you’ve got some pretty special automotive needs. For most of us, it’s all the car we could use or want.

Unless you habitually carry tall rear-seat passengers, or really bulky cargo, or go off-road, it’ll do you proud. It drives as wonderfully as the 3-Series sedan does. Have your cake and eat it. It’ll carry a lot of cake. 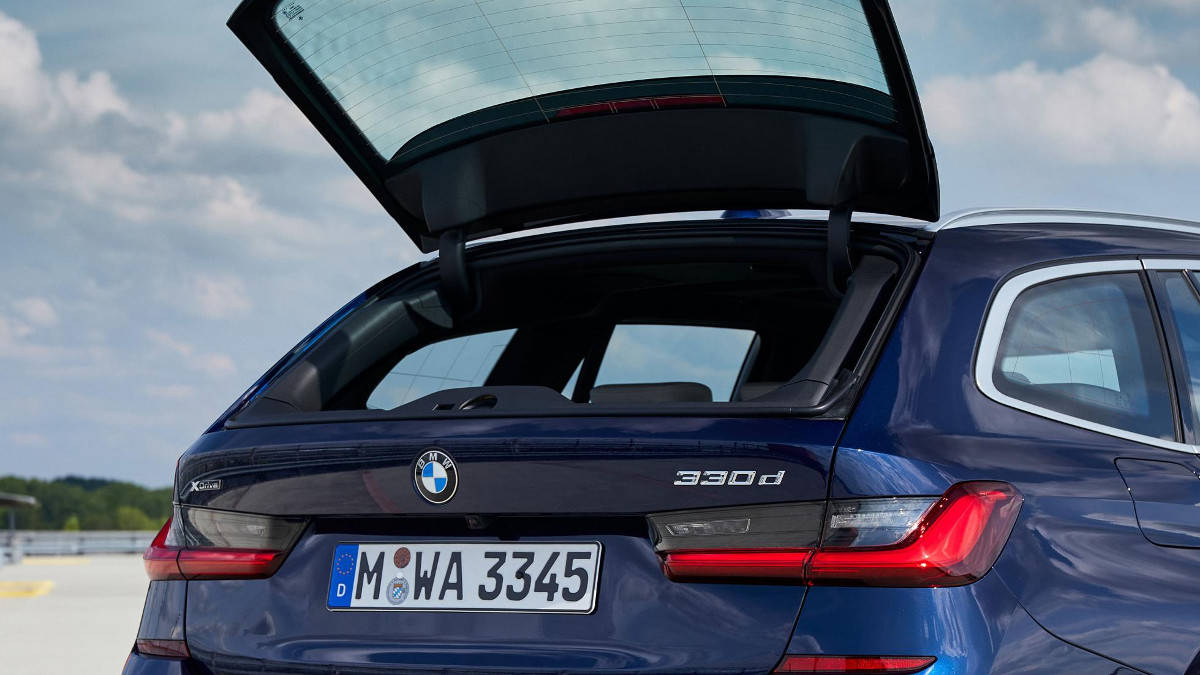 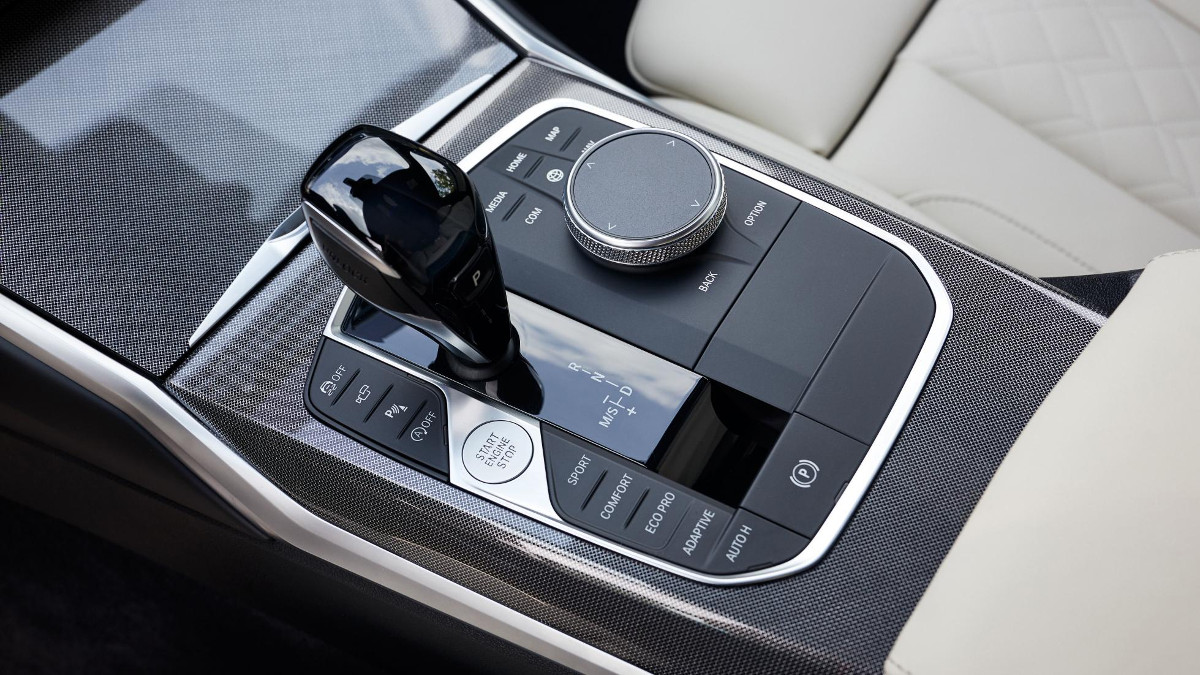 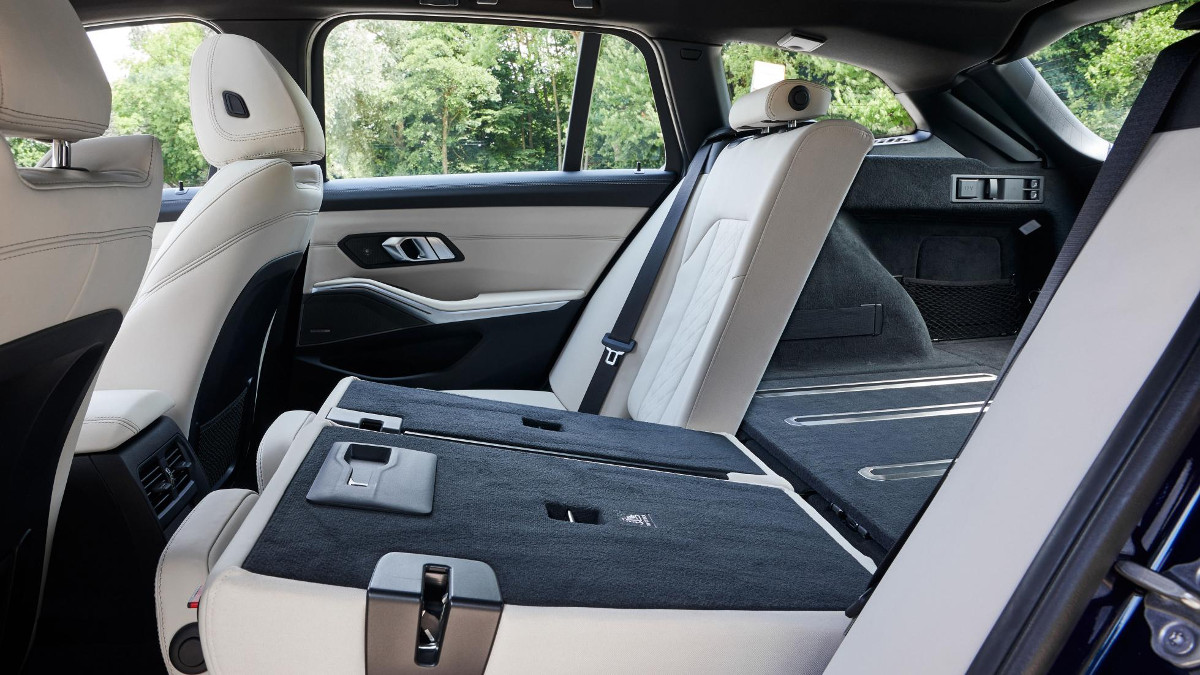 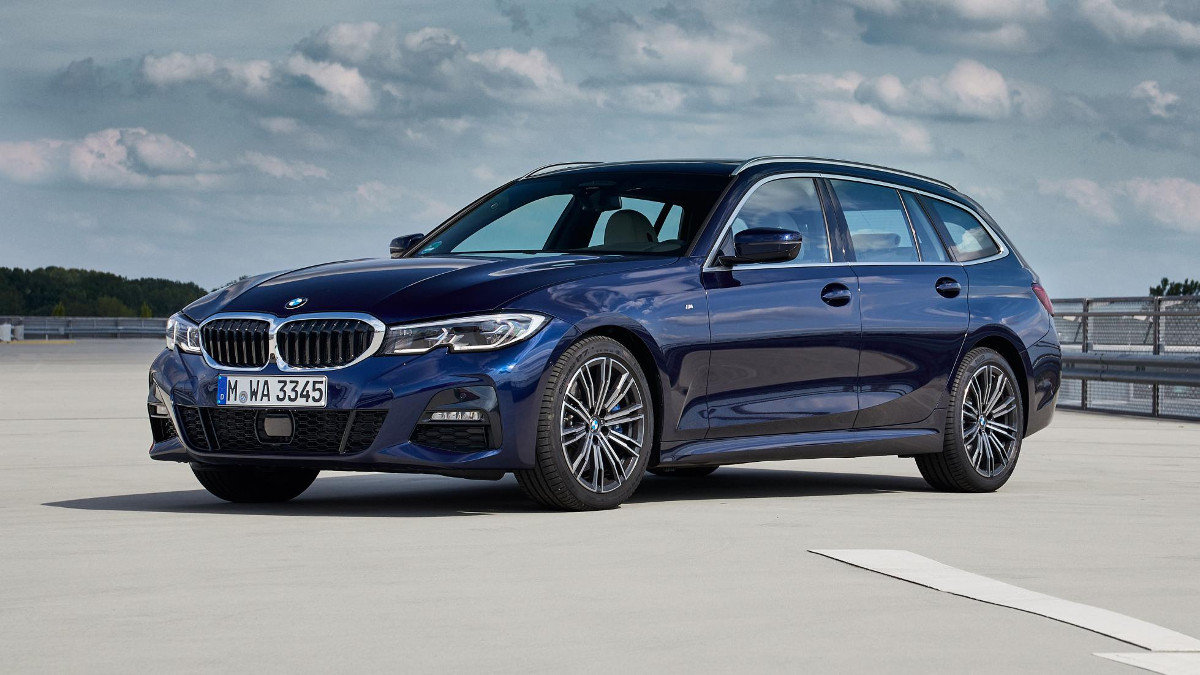 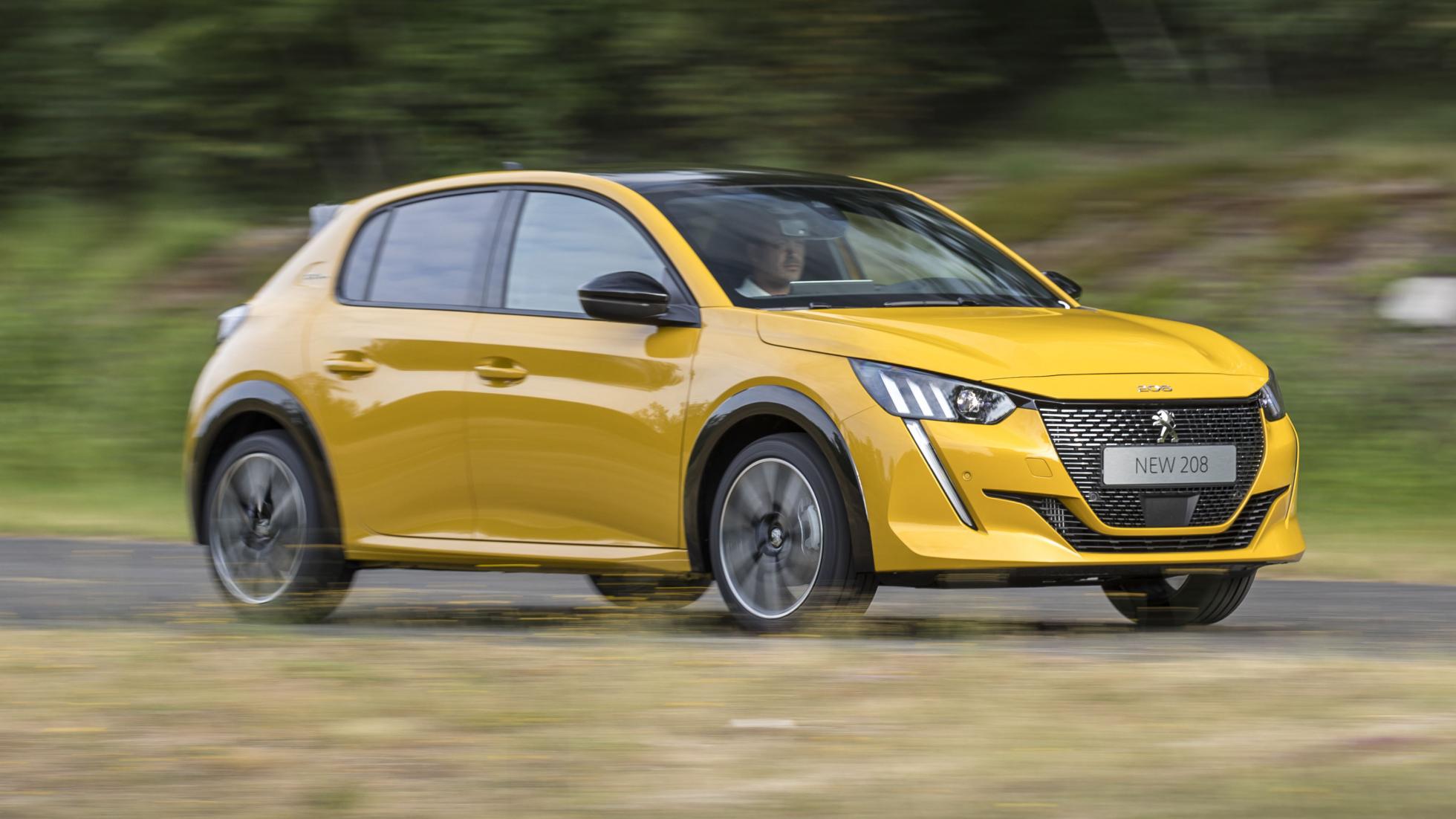 First drive: Can the upcoming Peugeot 208 replicate the 205’s success?
View other articles about:
Read the Story →
This article originally appeared on Topgear.com. Minor edits have been made by the TopGear.com.ph editors.
Share:
Retake this Poll
Quiz Results
Share:
Take this Quiz Again
TGP Rating:
/20