First drive: Our favorite coupe from the ’90s has returned

Broadly, the 8-Series replaces the 6-Series. But it gets a new number because it’s grander than that. Also, the number 6 now resides on the rump of a big, practical hatchback, the 6-Series Gran Turismo.

Really, though, in the traditional and proper sense of the term, a Gran Turismo isn’t a bulky five-door, it’s a swish-looking coupe. That’s to say the 8-Series.

Repeating the history of the old 6-Series, the 8 launches with gasoline and diesel two-door coupes, then the range gets populated by convertibles and four-door Gran Coupes. There will be an M8 version of each of those bodies. Lick your lips. 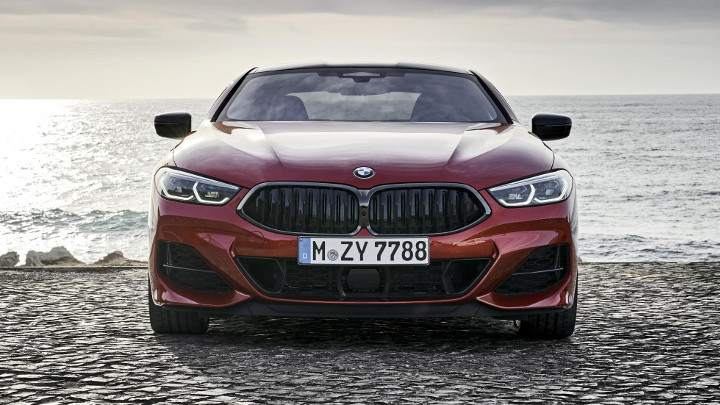 Outside, the 8-Series coupe wears the stentorian new face of BMW, more angular and big-grilled than ever—though the grille has active shutters and is actually blanked off most of the time for drag reasons, opening only when the engine gets sweaty at low speed. The sides are sculpted and chiseled; the rear shoulders are broad. The roof can optionally be spec’d in carbon fiber, and it has a double-bubble section. It tapers downward almost from the top of the windshield.

Fine elements in themselves. But to our eyes, the bulky nose and tail deny the 8-Series the grace of some rivals. Still, you can’t argue with the drama of those low, wide, broad-shouldered proportions.

Underneath, BMW has thrown its best tech at it. The M8 will get the mighty M V8, but for the moment, there’s an ‘ordinary’ V8 that makes a slightly extraordinary 523hp. The other option is the 840d, a 3.0-liter six. 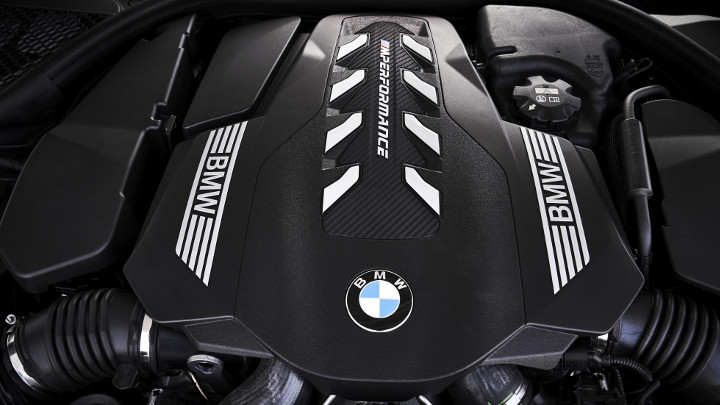 Whatever the engine, all wheels are both driven and steered as standard, and the damping is adaptive. For good measure, this M850i test unit had optional active anti-roll, too. All four of those systems alter their thresholds in harmony as you switch to the sport modes.

The body contains carbon fiber as well as aluminum and steel—it’s related to the multi-material 7-Series. Even so, overall weight hovers around 1,900kg for the V8 version.

BMW says this is a sports car, but to us, it looks like a GT. There’s no shame in that. Pity the new 6-Series has burgled those initials, though.

Anyway, in the past, the number 8 has meant a big deal for a BMW. The 850CSi and the Z8 became cherished. The i8 surely will, too. But looking at the new 8-Series, and especially peering into its 3-Series-like cabin, we wonder if it’s distinctive enough from the rest of the BMW range. Let’s see if there’s much distinction in how it acts. 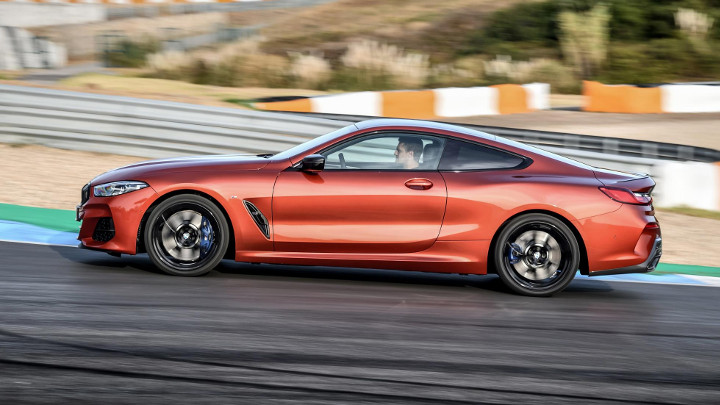 The M850i has a new, cleaner-running, and heavily powered-up version of BMW’s ‘regular’ 4.4-liter V8—and its 523hp and epic thrust are absolutely nothing to be sneezed at. The upper half of its rev band is solid nourishment, pulling like Jupiter’s gravity to somewhere beyond 6,500rpm. Although it operates without the audible spice of the M V8, or AMG’s, Sport mode both opens the exhaust flaps early and switches on loudspeaker enhancement of its voice.

Lower down in the revs, its manners are nicely discreet for below-the-radar mooching. It’s laggy below 3,000rpm, but the smooth autobox is responsive enough to paper over the cracks. At those revs, a distinct V8 rumble will stimulate your inner petrolhead, but it’s not so loud it’ll annoy the general population. 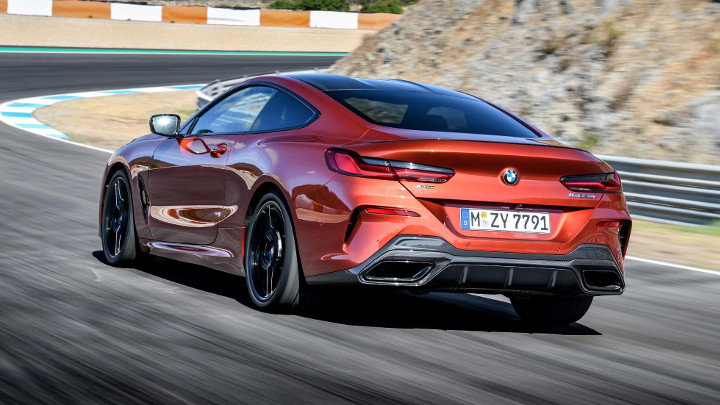 In full cry, the suspension and steering will chomp their way down a difficult road at a crazed rate without batting an eyelid. Clearly, a lot is going on down there to shepherd and marshal the 1.9 tons, but from your seat the effort is well-disguised. Adaptive damping, four-wheel steering, active anti-roll...yet it doesn’t feel like a computer synthesis. It’s just like a well-sorted car a couple of hundred kilos lighter.

The four-wheel-drive system favors rearward distribution in Sport mode, and in the rain, the M850i becomes a pretty snaky customer if you loosen (let alone disengage) the traction control. Keep things in Comfort mode and it’s protective and super-secure.

Throwing it around like that, you’d feel even more confident if the steering carried a little less squidge and a little more feedback. There’s nothing wrong with its gearing, but even once you’re on lock, it always carries an initial softness. 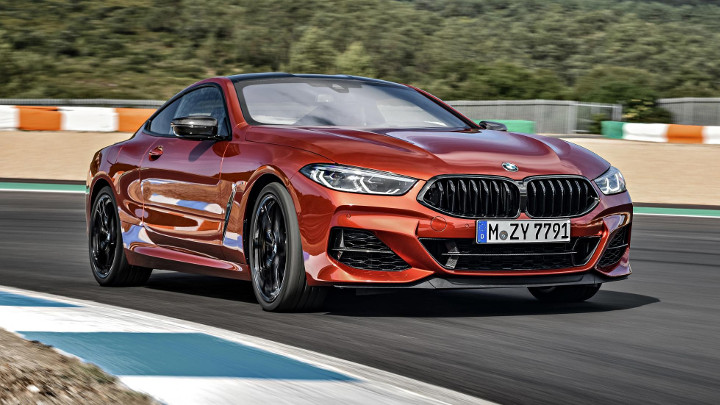 No doubt next year’s M8 will be sharper, but for now, the M850i is a GT in character and maybe this isolation is deliberate. By the same token, tire noise and sharp bumps are only distantly bothersome.

The brakes are plenty powerful for quick road driving. Like the suspension, they feel natural despite a lot of tech behind the scenes—they’re effectively a by-wire system.

The 8-Series can be had with most of BMW’s advanced driver aids—steering assist on highways, and very advanced cruise control. But the switchgear and warning lights make the handover from the car to the driver occasionally confusing. Use with vigilance. For long night drives, the optional laser headlights are just the business.

For really long highway hauls, you’re going to want the diesel. Its 0-100kph time still begins with a four, and driving with sense, you’ll be taken an easy 800km before fuel. Your bladder will give out sooner. 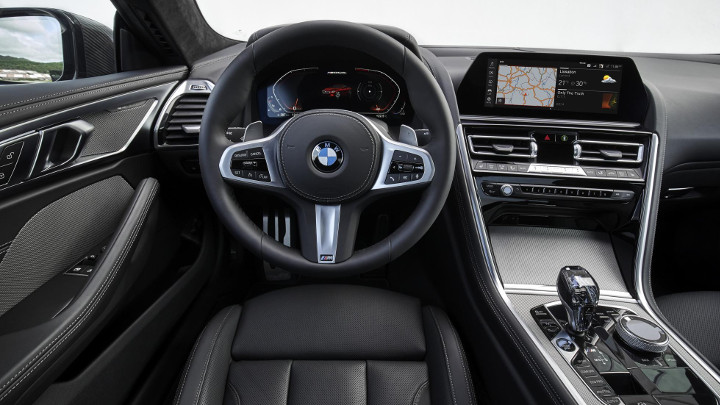 Here’s what we mean when we say the 8-Series might not be distinctive enough.

Much of it is just like the rest of the 2018-onwards family of BMWs. Thumb the ignition and the displays that light up—HUD, instruments, center screen—are exactly what you’ll get on a well-optioned new 3-Series. The switches and the software and iDrive, too. 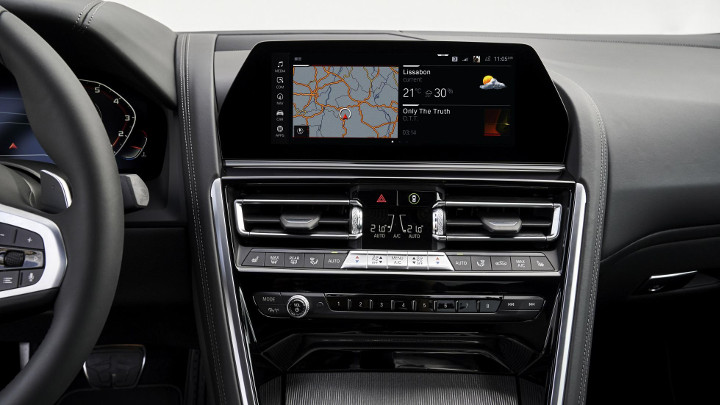 Mostly, this stuff works vastly better than what’s in the high-zoot independent brands like Aston Martin or McLaren, or the non-independent Lexus, for that matter. The iDrive screen is further developed—it has more display resolution, and is more connected and more responsive than ever. The heads-up display, a standard fit, is awesome. It’s huge and clear, and carries loads of usefully context-dependent info.

Just as well actually, as the new TFT-screen instrument cluster is a mess. There’s a big area in the center that shows navigation diagrams, which can’t be used for anything else if you know where you’re going. Alongside is a near-unreadable rev-counter. In compensation, you get a tach in the HUD when in Sport mode. The new climate controls are a bit fiddlier than BMW’s previous efforts too, and the silver buttons are impossible to read when backlit. And while Apple CarPlay-over-Bluetooth is a convenient idea, it was glitchy in the test cars. That’s a nitpicking paragraph, but more nits than you expect.

The dash and the doors are swathed in beautifully stitched leather. The front seats are a good place to be, poly-adjustable and supportive. The back ones aren’t—they’re horribly cramped, for knees and heads. At least the trunk is biggish, and folding the useless backseat extends it some more. Around the front cockpit, you’ll find useful storage. Well-judged packaging choices for a long-trip car. A GT. 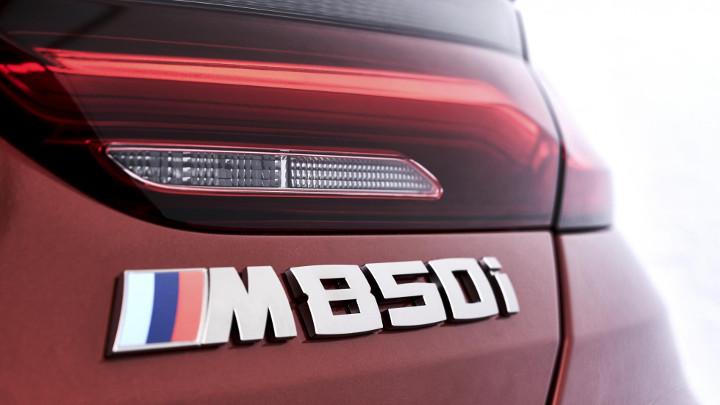 The people who developed the 8-Series did a very good job. It’s across-the-board competent. The problem lies not in its execution but its concept.

Owning a BMW, even a top-dog BMW, doesn’t scale social mountains to the same altitude as owning a Bentley. That, in essence, is the trouble with the M850i, as, with a few options, it costs not a whole lot less than a Continental GT V8.

If you really like BMWs, that’s fine. Because it’s not greatly different from the rest of the BMWs—just more and better of the same. BMW does do a forward-looking 8, the i8. The 8-Series is less fun that that, and rather backward-looking despite all the technology.

You could argue that its rivals from other carmakers are similarly traditional in outlook, but they’re more special because the roads aren’t clogged with their cheaper relatives. 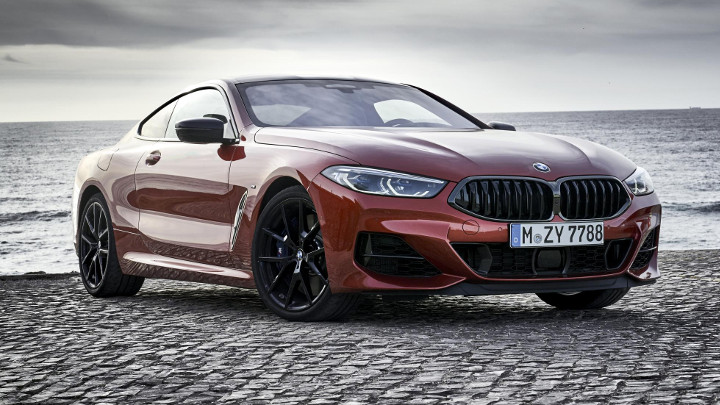 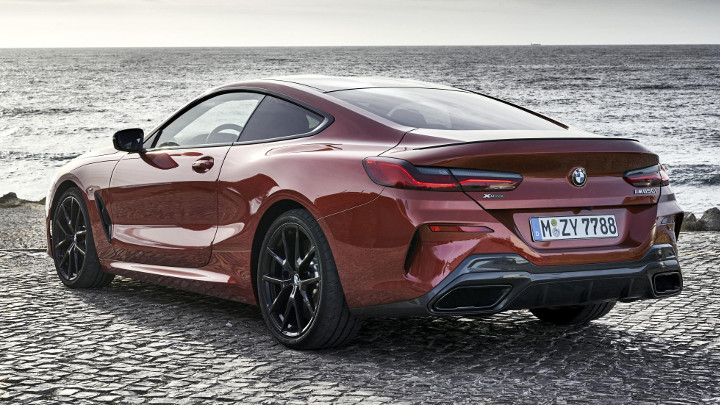 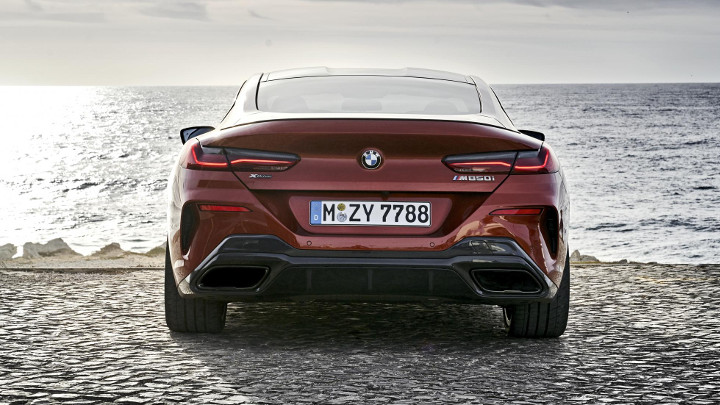 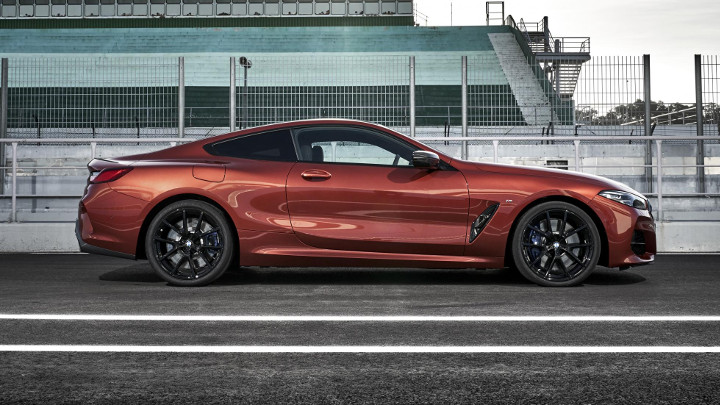 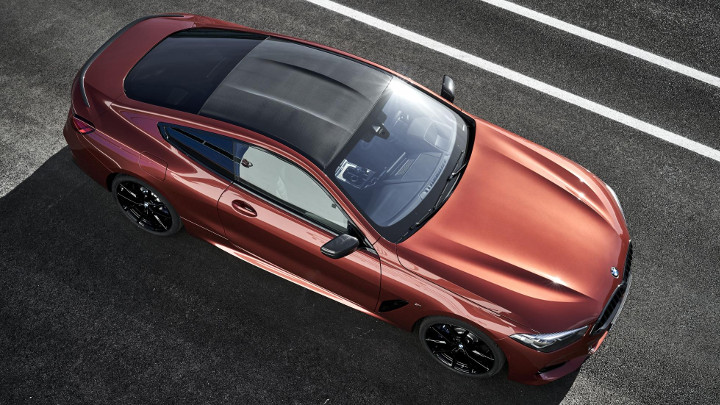 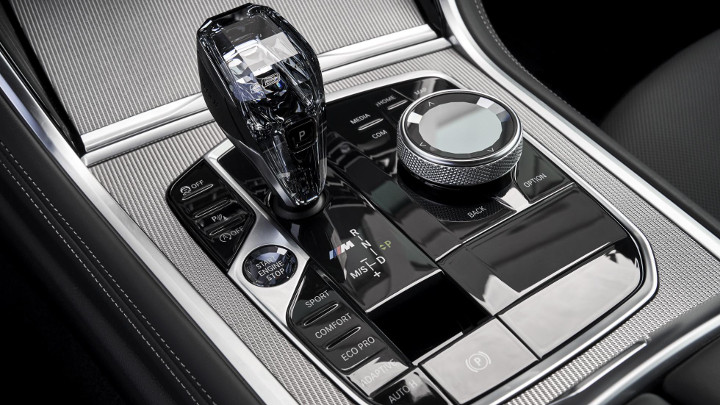 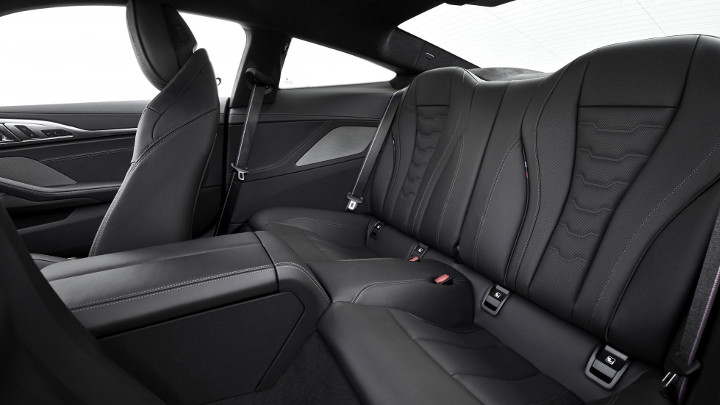 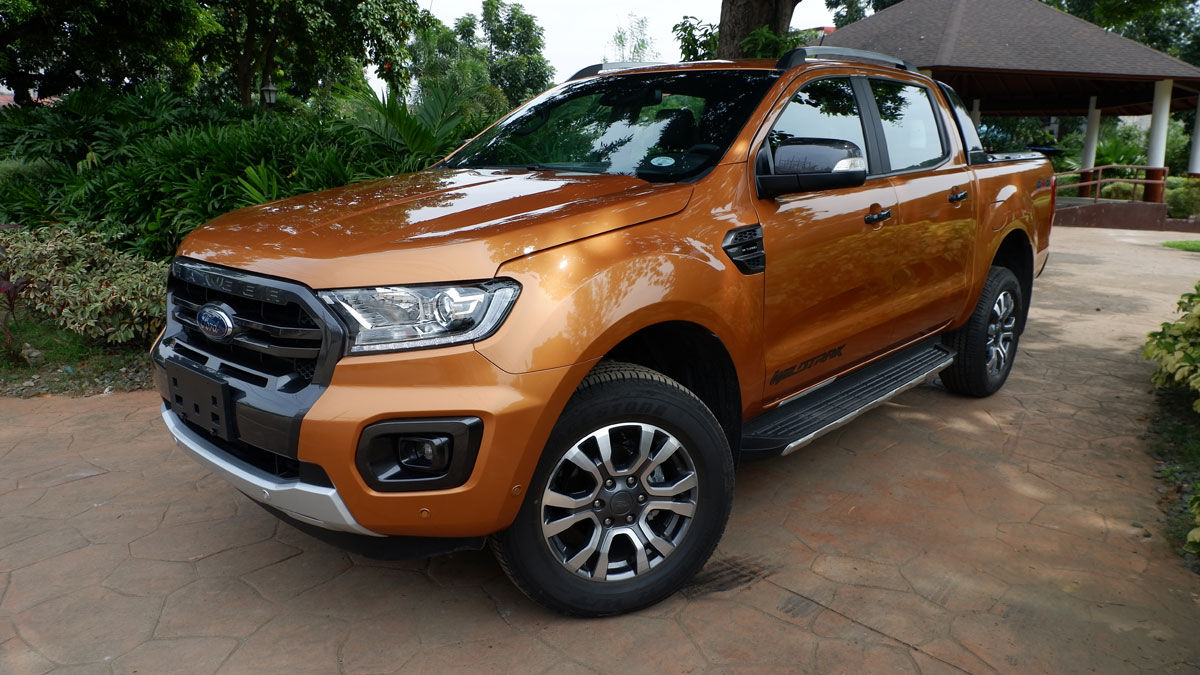 Review: Ford Ranger Bi-Turbo Wildtrak 4x4 AT
View other articles about:
Read the Story →
This article originally appeared on Topgear.com. Minor edits have been made by the TopGear.com.ph editors.
Share:
Retake this Poll
Quiz Results
Share:
Take this Quiz Again
TGP Rating:
/20