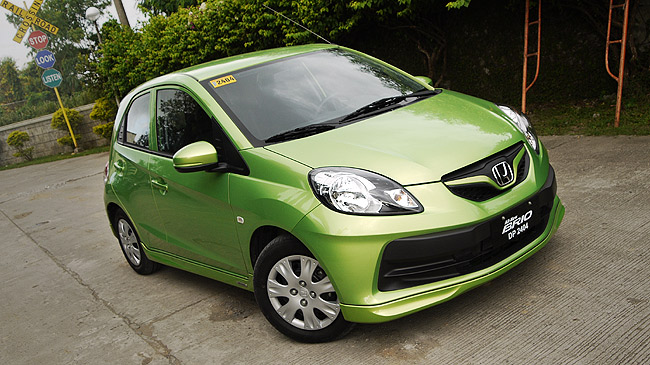 It's a familiar story: A Japanese marque releases a small, inexpensive and quirky car with a rorty little motor. It's a cult hit, spawning ever bigger, more powerful and more refined successors.

At some point, the car becomes too big and expensive for the Bohemian enthusiasts who made it a success in the first place. So the company releases a new, smaller model. It becomes another cult hit, which soon grows up and out of the economy class as well. So the maker has to release a new model--yet again.

And that model is the Honda Brio. 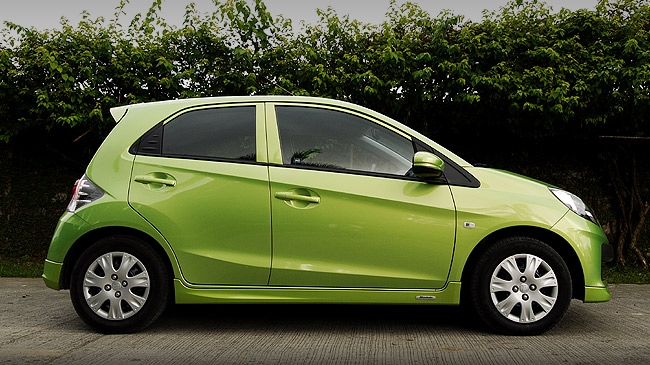 This is an absurdly cute little car. I haven't gotten this much attention in a hatchback since I last drove the CR-Z. I even got thumbs-up from jaded tollgate attendants late at night.

Searing neon green metallic paint sits nicely on the Brio's surprisingly wide flanks and subtle curves. The car is capped at one end by a tiny grille sandwiched by shapely headlights, and at the other end by a glass hatch vaguely reminiscent of the old Civic EF, framed by CR-Z-ish dogleg pillars.

Only the "Altezza tails" and tiny hubcaps spoil things, but they're a minor quirk rather than a major transgression. And none of the Brio's many admirers seemed to mind. That's a clear win. 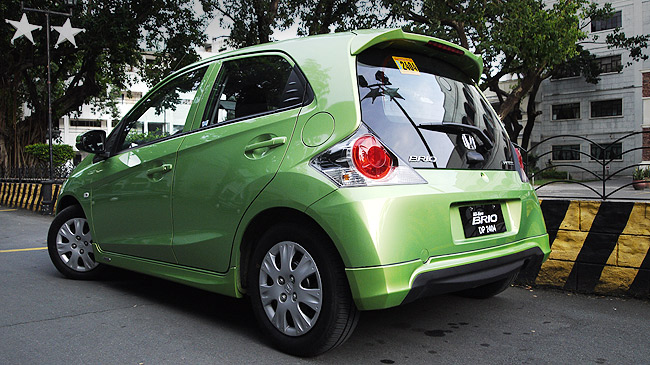 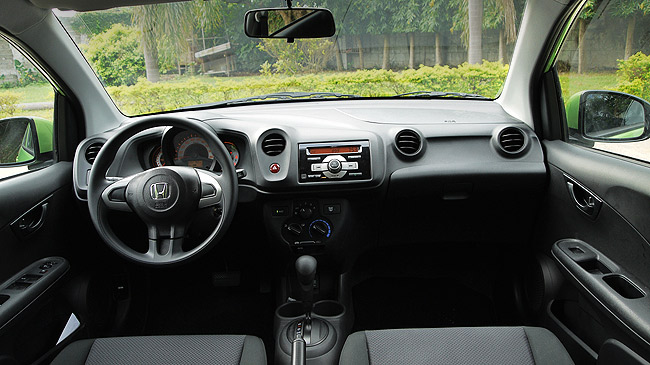 At these prices, you don't expect luxurious materials. That said, the plastic isn't all too bad, and the layout is at once quirky and functional, with lots of cup- and bottle-holders, useful double door handle pockets, and more elbow and knee-room than the small exterior suggests. The seats are supportive, with good side bolstering but a lack of leg bolsters.

Rear legroom is definitely lacking compared to the likes of the Mitsubishi Mirage and the Hyundai Grand i10, and the glass hatch doesn't give you much of a trunk opening (or much of a trunk). The rear-seat angle, however, makes for good comfort on long trips.

(Read our reviews of the Mitsubishi Mirage and the Hyundai Grand i10.) 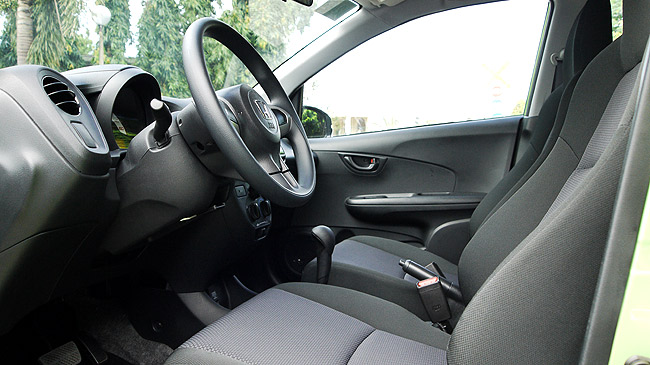 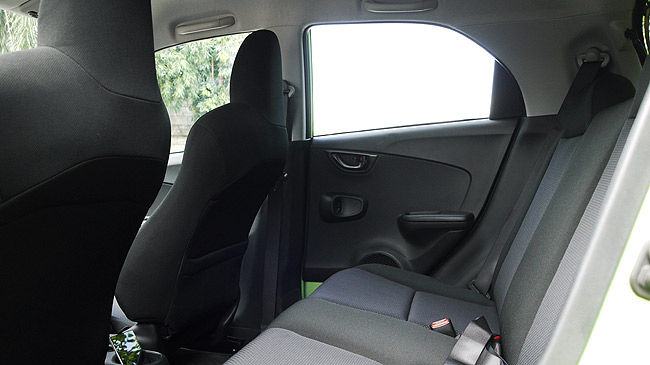 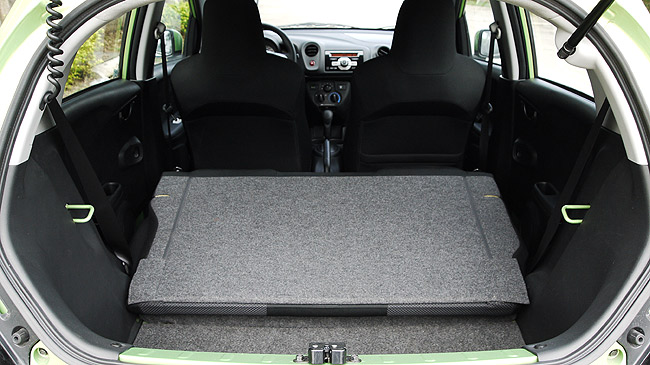 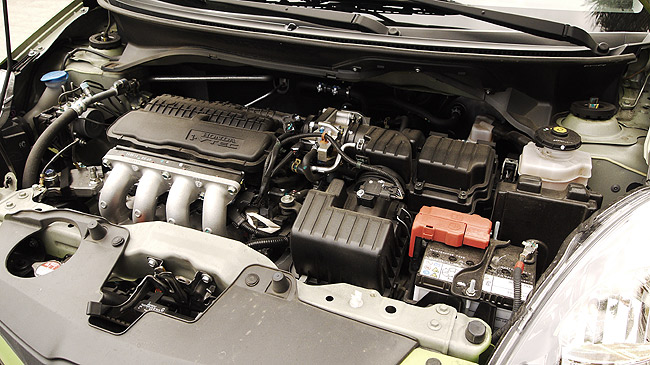 The Brio's 1.3-liter engine is head and shoulders above the rest in terms of acceleration, except perhaps the 1.2-liter motor in the Kia Picanto and the Grand i10. But the 98hp Honda mill has much more zing in the upper reaches of the rev range.

Despite the usefully short gearing on the Jazz-sourced five-speed automatic transmission, stoplight takeoffs are gentle unless you manually shift it into low range. In fifth gear, at 1,500rpm and at 80kph, 20+km/L is possible, but even a bit of frisky driving will take you below that magic number. We'll reserve our final verdict on economy until the engine has a few more kilometers on it. At just 600km on the odometer, this one's understandably tight. 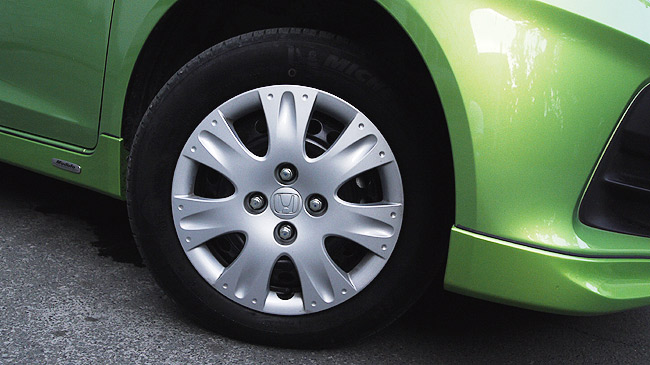 The Brio's steering isn't as quick or involving as the best, but the short wheelbase and the square stance give it a lively nature. Unfortunately, tall 175/65 R14 Michelin Energy XM2 "economy" tires wash out into understeer easily compared to the sportier rubber on some competitors. There's also a distinct lack of suspension travel when bombing down poorly surfaced back roads, or even city humps, and there's a lack of sound insulation around the wheel wells.

In the city, however, the Brio's tiny turning circle and excellent visibility make it great fun when threading through traffic. And there are few cars easier to park, the short wheelbase and big glass making the Brio handier than some smaller hatches in this regard. 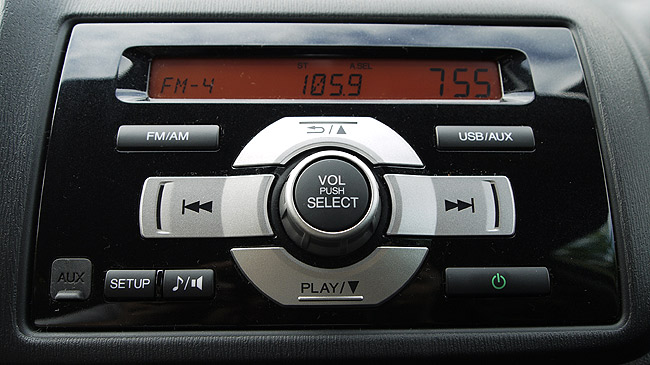 The Brio comes with the basics, keyless entry, power windows, a 2DIN stereo with USB/AUX connectivity, and not much else. While it does have dual airbags and antilock brakes, it starts at P609,000, about P100,000 more than the Mirage or a similarly equipped Wigo. The Modulo bodykit seen here bumps the price up even more.

Of course, the base Mirage GLX doesn't have ABS. The Wigo and the Grand i10 do, but they only come with a 1.0-liter motor at those prices. The loaded Mirage and Grand i10 are better-spec'd than our test unit, but both cost quite a bit more.

The Brio isn't quite the third coming of the Civic, but it's quick, stylish and lovable. The price tag may look shocking at first blush, but the sophisticated drivetrain justifies it. And Honda doesn't scrimp on the other oily bits underneath the hood, with a full-width radiator and a dual fan setup--a boon in hot and heavy traffic. There are more expensive sedans that don't have cooling systems this capable.

Just like Hondas of old, the Brio offers engineering excellence, but at a price premium that might turn off bargain-hunters. But given how many passersby were shocked that you could actually get an honest-to-goodness Honda for so little money, it might be possible that the Brio has already got its own niche market waiting for it.

Review: Chevrolet Sonic LTZ 1.4 AT
View other articles about:
Recommended Videos
Read the Story →
This article originally appeared on Topgear.com. Minor edits have been made by the TopGear.com.ph editors.
Share:
Retake this Poll
Quiz Results
Share:
Take this Quiz Again
TGP Rating:
/20