As American as apple pie
by Niky Tamayo | Jun 4, 2014
CAR BRANDS IN THIS ARTICLE 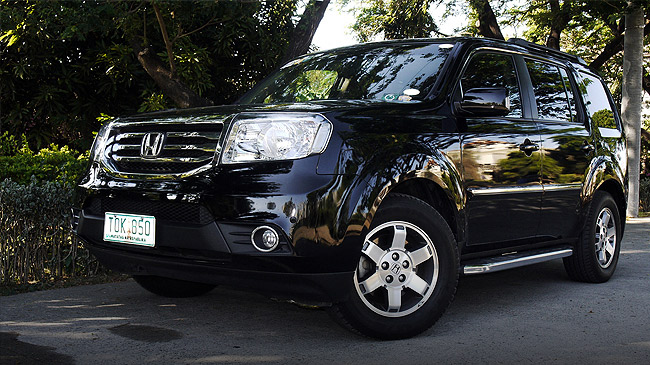 In a market where the divide between cars and SUVs grows ever smaller and traditional SUV lines are becoming more and more like crossovers, it's sometimes refreshing to see a car that knows exactly what it is and what it's meant to do. The Honda Pilot is one such car. While the badge is Japanese, the Pilot was designed and built in the United States of America, and is about as American as they get. 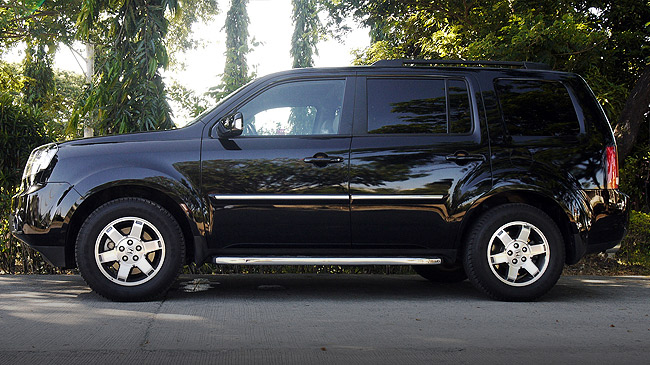 Despite the recent facelift, the Pilot is still one of the most traditional-looking vehicles in its class. As opposed to sleek competitors from Ford, Mazda and even Hyundai, the Pilot's exterior design can be summed up as "boxy."

The squared-off front lights and grille only serve to accentuate the tall and boxy front end, while the side profile is vaguely reminiscent of the Ford Expedition, only not quite as big. Tasteful 17-inch alloy wheels are wrapped in rubber thick enough to go jungle-crawling in, although the low ride height seems more suited to less extreme pursuits. 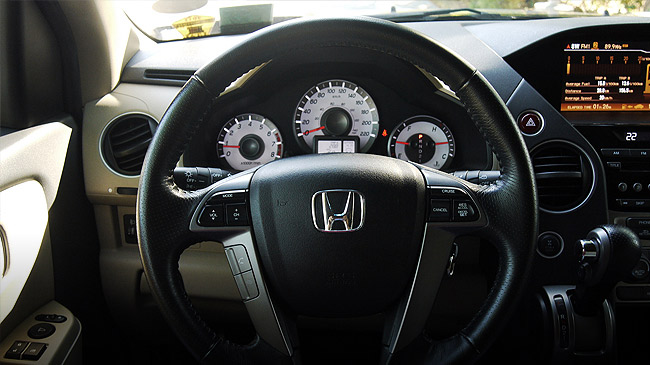 As expected of a traditional SUV, the interior is a mélange of beige, brown and very dark gray. While it all looks very old-school American, the plastics and fit-and-finish are all Honda-level in quality.

The upright dashboard and dash-mounted gear lever make for lots of legroom and center-console storage that has to be seen to be believed. Headroom, legroom and comfort in all three rows are top-notch, and there are releases in the trunk to fold both the second and third rows forward. The resulting cargo floor may be sloped, but it's huge.

(Read: Just how many soda cans can you fit inside the Honda Pilot?) 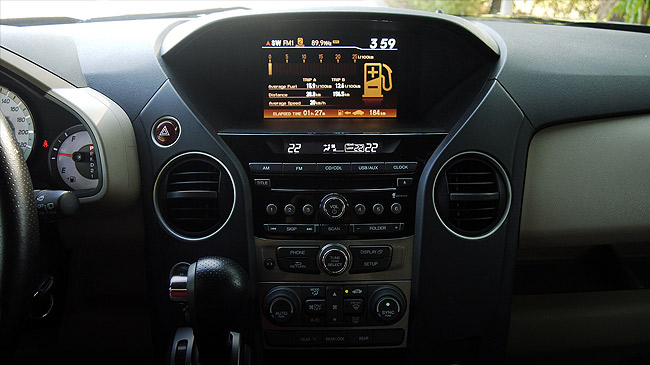 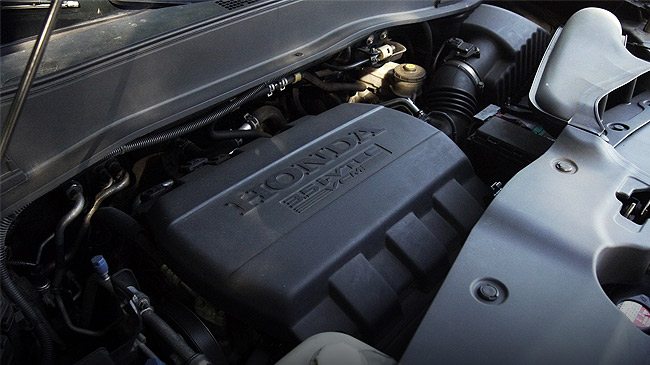 A long-geared five-speed transmission and a heavy all-wheel drive system make for laid-back off-the-line acceleration, but once it's wound up, Honda's 3.5-liter V6 sounds and feels lovely.

Due to the transverse engine layout, there's some tugging at the wheel during hard acceleration, but torque steer is never an issue. While an intergalactic fifth gear, eco mode and cylinder deactivation conspire to help you save fuel, the Pilot struggles to better 12-14km/L on the highway even when you're trying hard, and economy in traffic is in the 3-5km/L range. 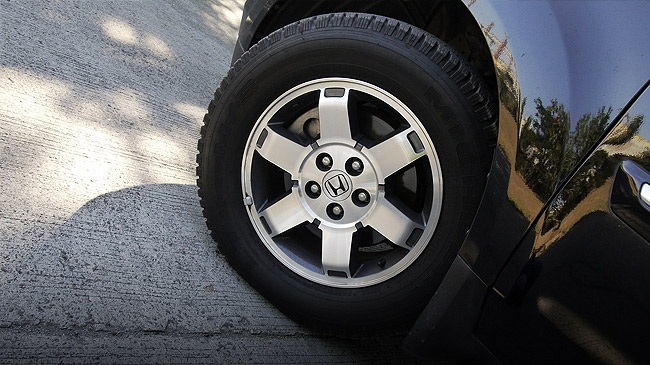 Huge 245/65 R17 Michelin LTX M+S tires hum a bit on the highway due to the tread siping meant to deal with snow and slush. Then again, they are soft and ride comfortably over all kinds of terrain. The Pilot's boxy fenders and tall hood make it difficult to thread down narrow inner-city roads or off-road trails.

The Pilot may sport a double wishbone suspension and hydraulic steering, but it's more like ocean liner than sports car, floating and rolling over the road. Thanks to all that mass, however, it's not bouncy, and the ride is wonderfully plush on long highway trips. 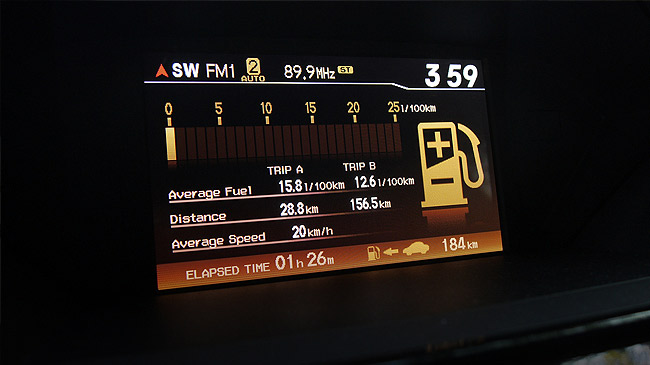 Want features? The Pilot has almost anything you can think of. Power front seats, plush leather thrones, a built-in subwoofer, a sunroof and a split tailgate, which allows you to load groceries without lifting the hatch.

A built-in multi-function display lets you toggle between various functions, and is large enough to be read from Jupiter. There are also various multimedia functions and connectivity in-cabin, including a wireless headset and an optional rear DVD player. While there's no touchscreen yet, it's only a matter of time before we get it here, hopefully bundled with Apple's CarPlay system. 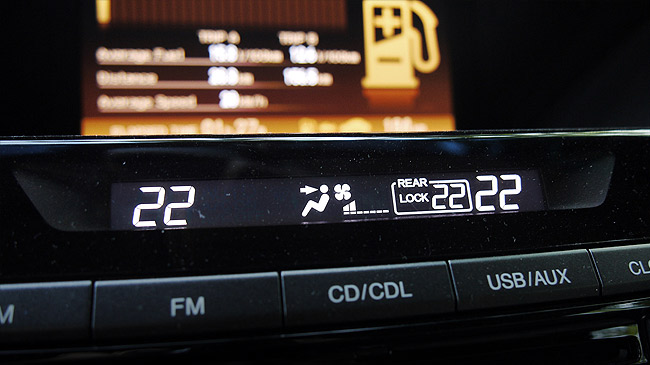 You'd be crazy to buy a gasoline SUV in this day and age, and even then, there are many that are sexier and newer than the Pilot. But for those who miss the good old days--when SUVs floated rather than carved around corners--the Pilot has its charms.

Indeed, it has what is possibly the most comfortable and most cosseting cabin in its class. While many modern SUVs are crossovers in disguise--sacrificing utility and space for style--this one may be the last car in this category that truly understands what traditional SUV buyers really want.

Review: Toyota Wigo 1.0 G AT
View other articles about:
Read the Story →
This article originally appeared on Topgear.com. Minor edits have been made by the TopGear.com.ph editors.
Share:
Retake this Poll
Quiz Results
Share:
Take this Quiz Again
TGP Rating:
/20