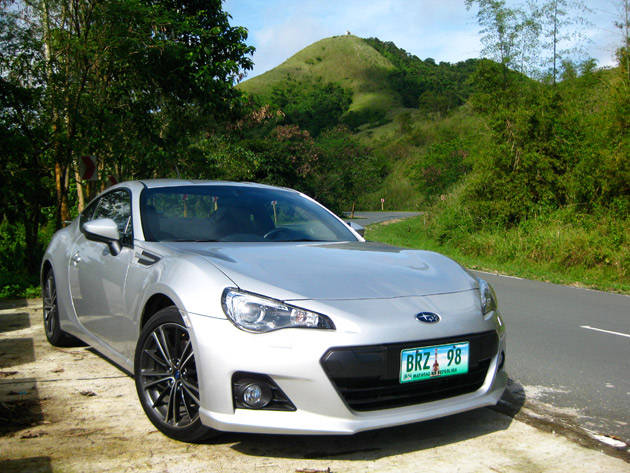 Back when the Mazda Miata was launched in 1989, it was unimaginable to get it in automatic. It didn't serve the purpose of having fun with a back-to-basics sports car. Shifting cogs manually was the best way of interacting with a car, let alone an engaging sports car. But automatics have come a long way with more responsive systems and Formula 1-inspired paddle shifters.

We first sampled the Subaru BRZ's twin--the Toyota 86--in June last year at the Subic Bay International Airport. The exercise with the 86 AT variant consisted of two fast-sweeping left bends and a short straight in between. With the philosophy behind this Subaru/Toyota sports coupe, we'd surely opt for the manual. But the automatic impressed us quite a lot. Now, we get our hands on the car with the other badge. 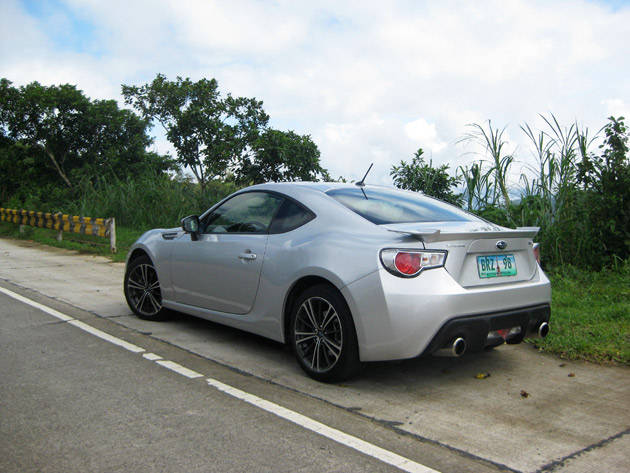 The automatic unit bears no difference from the manual BRZ, so the distinction from the Toyota 86 is the same: a smiling front bumper for the Subie as opposed to the 86's frowning look, a more dramatic headlight cluster and different fender gills. The Subaru also has the proper rear spoiler as an option. Apparently, it lowers the drag coefficient by a point to 0.27.

This BRZ is finished in Sterling Silver Metallic. While the WR Blue Mica is a popular choice since it reflects Subaru's rally heritage, it overpowers the identity of the sports coupe. Neutral colors (white, silver, gray and black) represent an impartial balance between Subaru and Toyota. 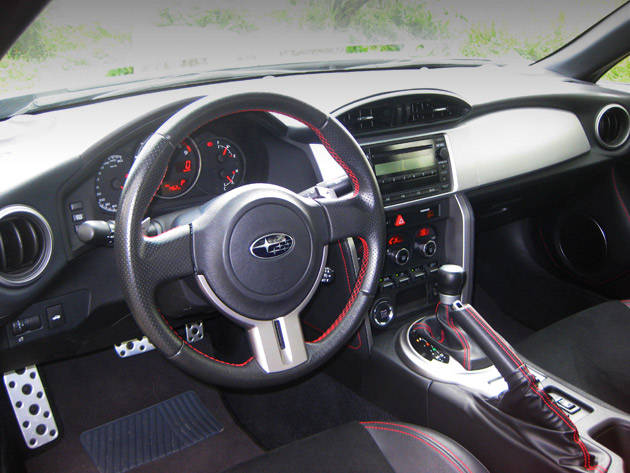 Inside, you'll instantly sense the BRZ's focus. The leather/suede bucket seats are snug and low without sacrificing comfort. The three-spoke leather-wrapped tiller looks retro, as do the row of toggle switches, which make the cockpit feel racy, while the centrally situated tach (all black in here as opposed to the 86's white ring) with a digital speedometer will rouse the enthusiast in you. And it's not a Subie without rotary knobs. Matte-silver dash trim takes the place of the 86's carbon-look treatment. The BRZ also has a more straightforward interior with the absence of red patches on the seats and door panels. Forget the rear seats. They're practically useless. But that's not a selling point of this car. This is about the driver and the sports coupe, and a passenger from time to time to experience the ride--that's it. 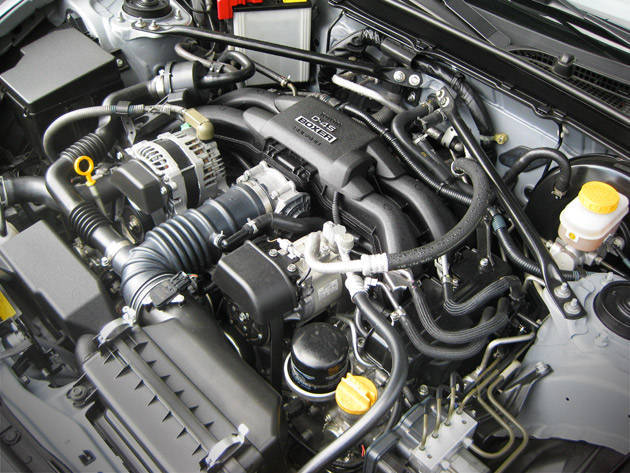 The horizontally opposed 2.0-liter flat-four boxer engine sits low and is situated further backward for better handling. It has an output of 200hp and a torque of 205Nm. That may not sound like much, but 200 is the magical number for a basic sports car.

This BRZ is equipped with an Aisin six-speed automatic gearbox, akin to the one in the Lexus IS. Unsurprisingly, gearing is relaxed and intelligent in city driving. The automatic makes no pretenses of what it's not. It's more easygoing on a stretch, which is the point after all. The ratios are taller, which is expected. On the bends, it can match the manual (Subaru and Toyota couldn't have done a better job). And that's what counts. Rev-matched downshifts stimulate the experience. Typical of a single-clutch auto, it gives a lovely thump when shifting, something that's zapped by the smoothness of a double-clutch gearbox.

Direct and port fuel injection not only increases the BRZ's torque, but also improves fuel efficiency. It can yield 9.5-10km/L in the city and 15km/L on the highway.

It's easy to diss the BRZ and say it lacks street cred because it "only" has 200 horses. Worse, people would be looking for acceleration comparable to the WRX STI. That's missing the point. If a turbo were to be bolted on, the car would need more support, thus adding weight and destroying the balance. Crazy-fast acceleration isn't the objective. Handling is, and the BRZ's feels natural.

The car responds to your inputs like hand in glove. Steering, throttle, gearbox and brakes work in harmony. It's a wonderful chassis--pure without excess power. It's a lot of car for the money--and with the price point, it's every man's Porsche Cayman.

Don't expect to find too many extras as the BRZ is a basic sports car. The neatest bit of kit with the automatic are the paddle shifters, which ultimately define this variant. You'll find the urge to put it in sport mode and use the paddles each time you're behind the wheel--shifts are more brisk. Hitting the redline and timing the shift light is a step easier without the left pedal, and you'll feel like you're playing Need For Speed, which is intentional.

The Subaru BRZ is a real-world sports car. It adds spice to the commute. While we'd still rather swap cogs manually, the automatic is such a good proposition without compromising too much the performance you'd get from the manual. We can't fault the automatic. For what it is, it's good. We can't ask for anything more. And it's the same price as the manual.

Review: Chevrolet Spin 1.5 LTZ
View other articles about:
Read the Story →
This article originally appeared on Topgear.com. Minor edits have been made by the TopGear.com.ph editors.
Share:
Retake this Poll
Quiz Results
Share:
Take this Quiz Again
TGP Rating:
/20