2012 Honda Civic has 5 versions in the US market

Japanese carmaker says: 'To each their own'
Jun 14, 2011
CAR BRANDS IN THIS ARTICLE 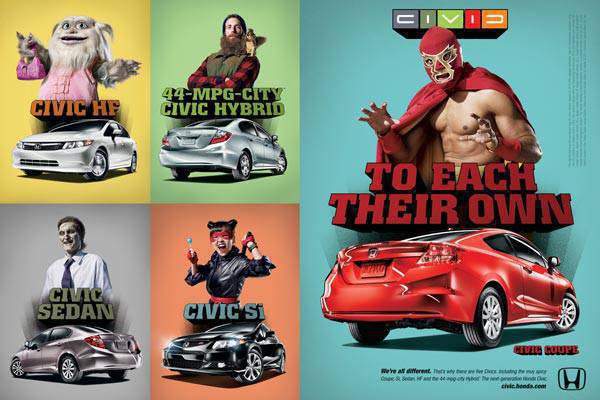 Turns out there are as many as five different variants of the 2012 Honda Civic in the US, and the Japanese carmaker is promoting this via a marketing campaign called, "To each their own." These Civic variants are the Civic Sedan, the Civic Coupe, the Civic Si, the Civic Hybrid, and the all-new Civic HF high fuel-economy model.

For more info on these variants, let us quote from the official press statement: "The Civic Sedan and Coupe models are powered by a 1.8-liter in-line four-cylinder engine with a 16-valve i-VTEC valve train and a dual-stage intake manifold. The engine produces 140hp at 6,500rpm and 174Nm of torque at 4,300rpm. The Civic HF is a value-conscious "high fuel-economy" sedan positioned between the Civic LX and the Civic EX. It is equipped with a five-speed automatic transmission, exclusive 15-inch lightweight alloy wheels and aerodynamic enhancements under the body and an exclusive rear spoiler. The Civic Si prioritizes handling and performance with a sport-tuned suspension and a 2.4-liter i-VTEC four-cylinder engine. More powerful than the 2.0-liter engine in the previous generation, the new engine produces 201hp at 7,000 rpm and 230Nm of torque at 4,400rpm. Lastly, the CVT-equipped Civic Hybrid uses the latest version of Honda's IMA parallel hybrid system to increase efficiency using an electric motor placed in-line between the engine and the transmission. A larger 1.5-liter i-VTEC four-cylinder engine, up from 1.3 liters in the previous generation, provides a broadened mid-range power band, and the switch to lithium ion batteries from nickel-metal hydride results in enhanced IMA electrical power assist."

To see these five Civic variants in a bit of action, here's the promotional video...

Shell offers us peek inside Ferrari factory
View other articles about:
Read the Story →
This article originally appeared on Topgear.com. Minor edits have been made by the TopGear.com.ph editors.
Share:
Retake this Poll
Quiz Results
Share:
Take this Quiz Again
TGP Rating:
/20