It turns out the Honda BR-V can go off-road

Strictly speaking, the Honda BR-V is classified as a subcompact SUV. Sometimes I’ve been tempted to put quotation marks on the ‘SUV’ part of the category. Because while the BR-V does seat seven and has a higher ground clearance than the Mobilio MPV, it just doesn’t fit the description of what most of us imagine an SUV to be.

Recently, I had an experience that made me relax my reservations about calling the BR-V an ‘SUV.’ Honda Cars Philippines brought the local motoring media on a drive from Bonifacio Global City to Bataan and back, to experience its second most popular model (next to the City) on open highways and rough roads. We encountered terrain that would make a pickup pause, but the BR-V bravely showed us what it was truly made of.

Our drive began in Bonifacio High Street, just a short walk from Honda’s main office. After a short briefing over breakfast, I was assigned a top-spec BR-V 1.5 V that retails for P1,155,000. Honda’s 2019 subcompact SUV (see, no quotes) has been refreshed with a new face, new 16-inch alloy design, and new rear bumpers. 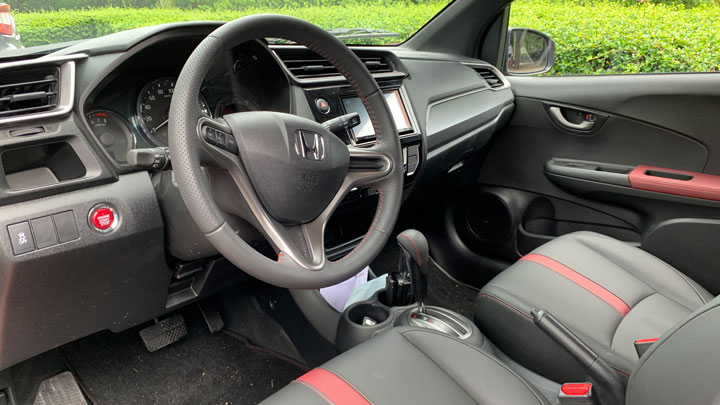 The higher V variant has a better cabin than its more affordable counterparts thanks to red leather trim, red stitching, and a more plush steering wheel. It also gets Apple CarPlay and Android Auto capability.

Unfortunately, I got the first driving shift among the three of us in the BR-V, so I had to slog through Metro Manila traffic until the first driver change in Total NLEX. My colleagues from Auto Industriya and Turbo Zone got to enjoy the BR-V’s roomy first and second rows, while we all relished Honda’s famed A/C. 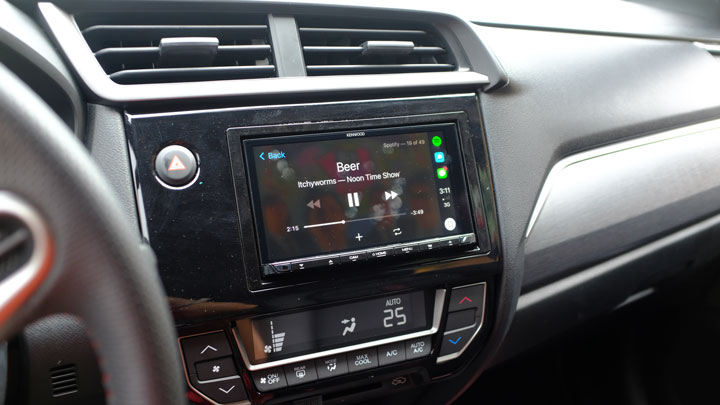 I had driven the pre-facelift BR-V before, which has exactly the same powertrain, and its performance was just right for urban driving. Size is ideal, too; maneuvering in traffic was painless. On the expressway, however, the CVT had a hard time drawing power from the 1.5-liter engine. This was apparent when I needed to overtake above 80kph. Although the BR-V was able to muster the energy required, stepping hard on the accelerator resulted in wails of protest from under the hood.

We switched drivers and headed to our lunch venue in Bataan. Using the new CarPlay connection made it easy to listen to our Spotify playlists. The USB port is hidden in the glovebox, so unless you wanted to drive with your glove compartment open, your phone has to stay hidden while it’s connected to the head unit. This might seem like an inconvenience, but you’re not supposed to fiddle with your Facebook while driving, anyway. Plus, CarPlay/Android Auto can easily handle basic smartphone functions.

After lunch we had another driver change, and it was me again behind the wheel. We headed to our final destination—Anvaya Cove in Bataan. 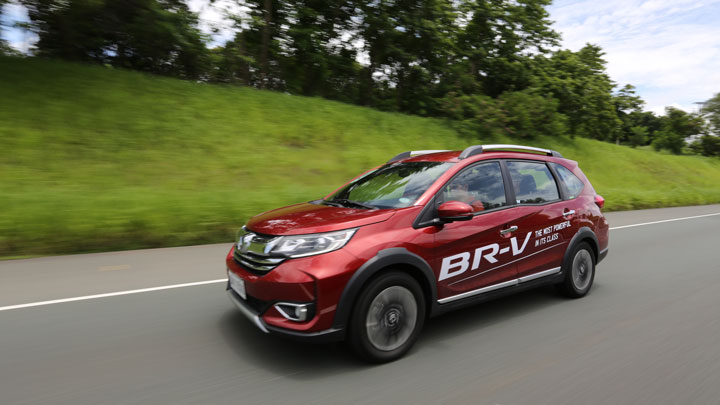 Instead of the usual route to Anvaya, event organizer Georges Ramirez took us literally off the beaten path. A landslide had destroyed part of the road leading to our resort, and workers were still in the process of repairing it. So, there were sections that were basically red mud—slippery terrain that’s like catnip to off-road guys.

But we’re not off-roaders. And we weren’t in pickups/SUVs with four-wheel drive, turbodiesel engines, and mud tires. We were in a raised and lengthened Brio-based MPV full of fattened journalists—and getting heavier thanks to the sugary drinks and chips in the backseat. “At least the added weight would give the BR-V more traction,” I thought as I followed the convoy. 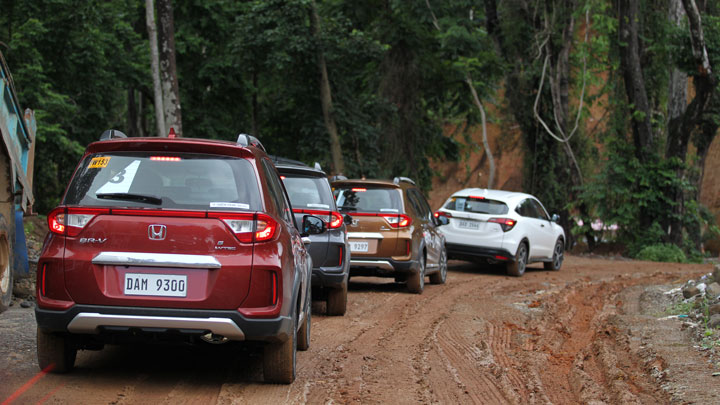 This was when Honda’s subcompact SUV earned my respect. In the muddy portions, I felt the BR-V sliding, but the traction control would kick in—I could see the Vehicle Stability Assist light blinking as the front tires continually sought and found grip. There were some deep ruts, but I didn’t feel the underside scrape the soil. The 201mm ground clearance may not sound like much, but it was quite handy.

The unpaved sections were interspersed with winding mountain roads, and at first, I wished I were in a Civic. But the BR-V had surprisingly less body roll than I anticipated. Turn-in was also good, and we all know how capable Honda brakes are. I braked late entering turns and I didn’t feel the tires losing traction. At this point, I could feel my companion in the car itching for a driver change. 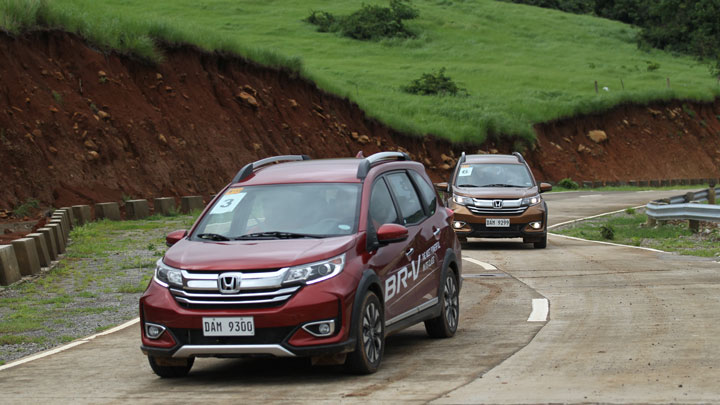 After my stint behind the wheel, I tried the backseat. Space was comfortable, and it was still cool thanks to the rear A/C vents. The BR-V passed my final test that day, as I closed my eyes and my lack of sleep caught up with me. I woke up just as we were entering Anvaya Cove.

Honda Cars Philippines’ traditional marketing exercise did its job once again. It showed us what its products can do, beyond what we normally discover on our own personal test drives.

This time, the BR-V proved its mettle, lifting the imaginary quotation marks we used to mentally impose on its subcompact-SUV classification. Whether in tight urban environments, on open expressways, or going over a bit of the rough stuff, this popular model does the job with aplomb. A stronger engine or a more versatile transmission would probably make it better, but for what most of us will ask of it, the BR-V proves it can deliver. 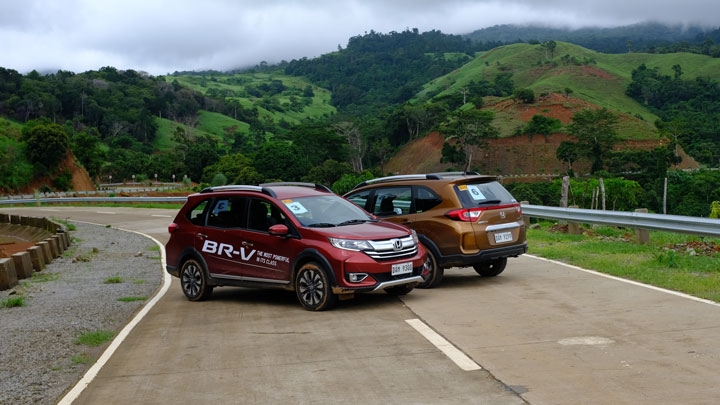 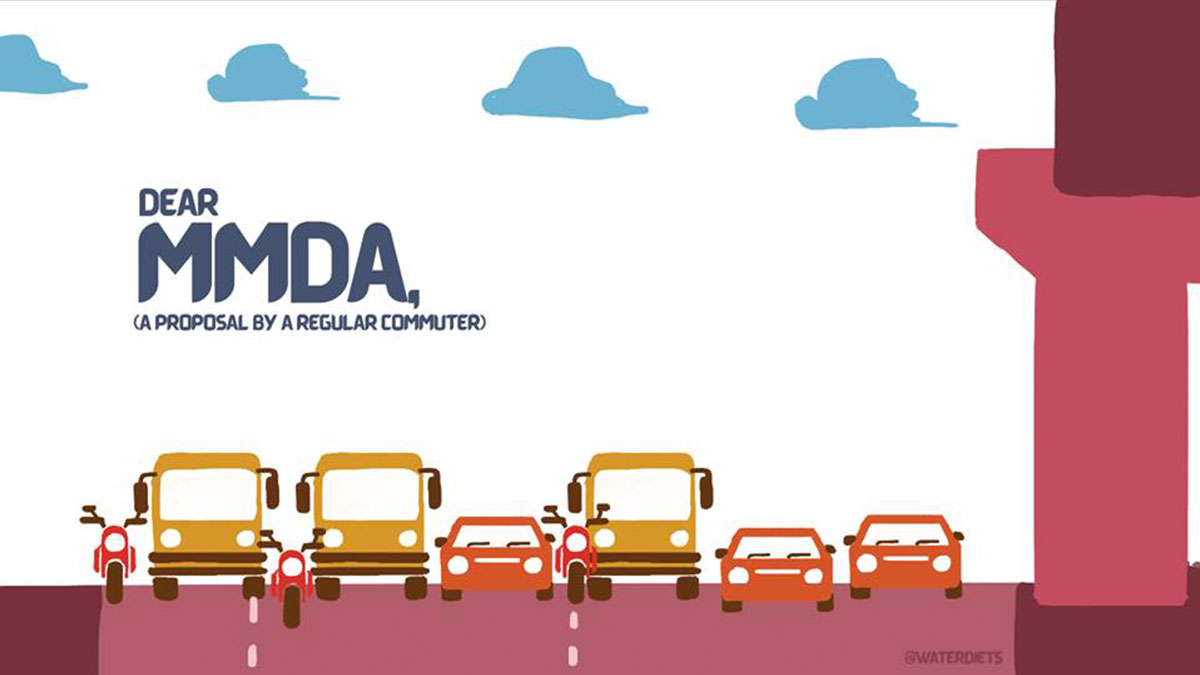 Could this be the solution to the MMDA’s bus problems on EDSA?
View other articles about:
Read the Story →
This article originally appeared on Topgear.com. Minor edits have been made by the TopGear.com.ph editors.
Share:
Retake this Poll
Quiz Results
Share:
Take this Quiz Again
Top Gear Philippines Rating
--/20
Engine
--
Power
--
Torque
--
Transmission
--
Fuel
--
Learn More